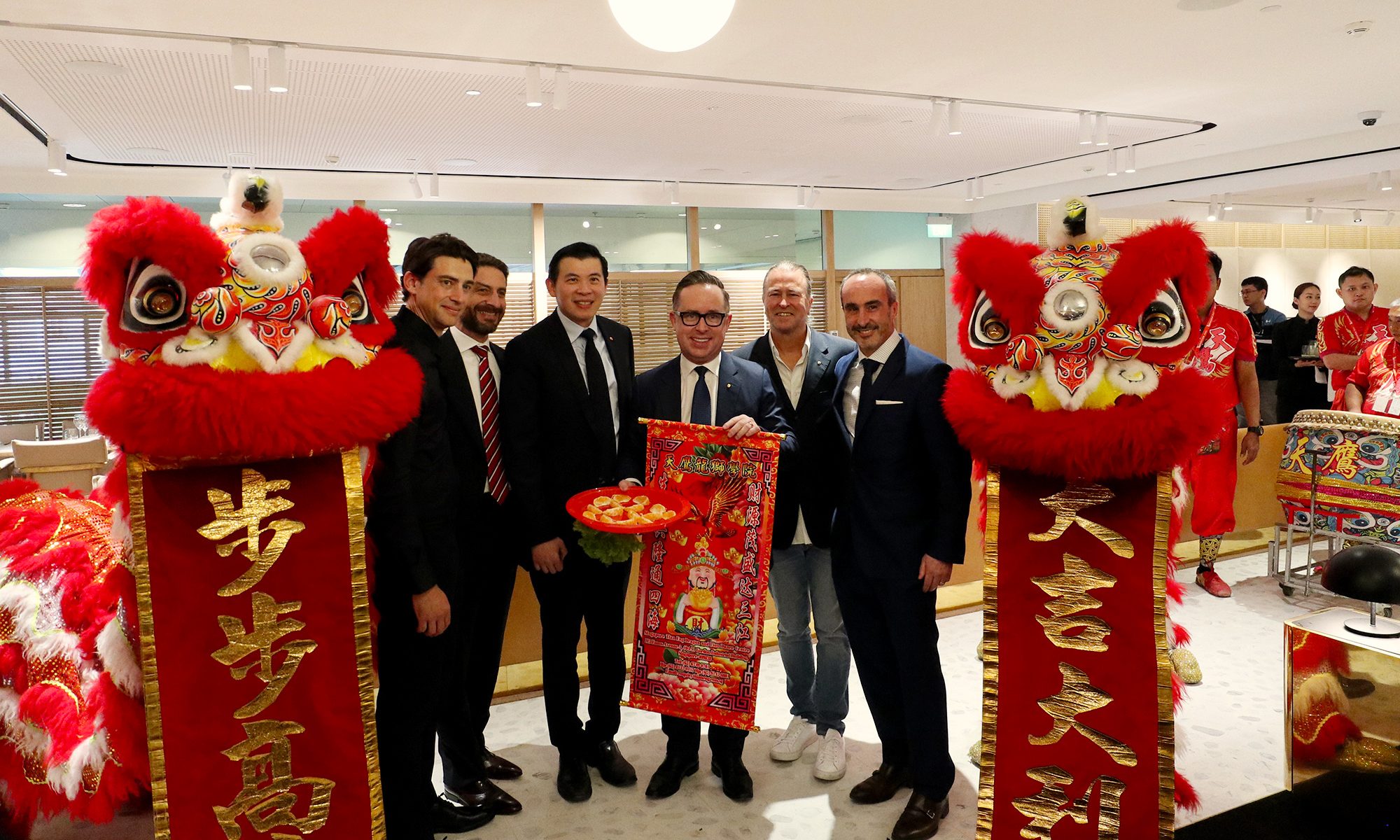 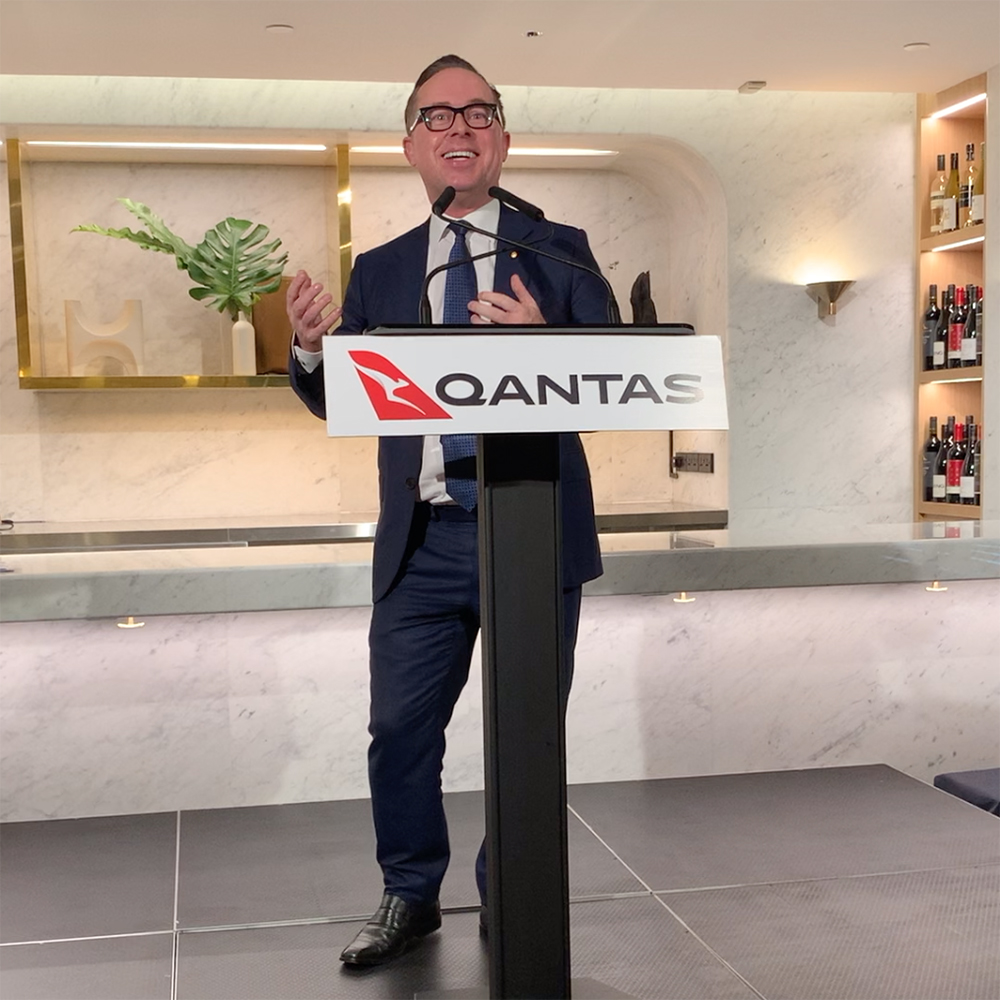 Australian carrier Qantas has formally cut the ribbon on its newest dedicated First Lounge at Singapore Changi Airport Terminal 1. Mainly Miles was invited by the airline to preview the facility at a media event, prior to official opening at 2.30pm on Monday.

Singapore joins Sydney, Melbourne and Los Angeles as the fourth city on the airline’s network to feature a dedicated Qantas First Lounge.

As many of our readers will know the lounge had a ‘soft opening’ on 18th November 2019, with staff perfecting the service for selected guests over the first couple of weeks, however Monday was the official launch led by Qantas CEO Alan Joyce and his team.

We arrived at Terminal 1 and were escorted to the lounge, which is a short walk from the Qantas check-in desks at row 8, through immigration control and to the lounge escalator on the right, towards the D gates.

That’s the opposite side of the terminal to the airline’s existing Business Lounge (read our review), which is located towards the C gates.

On arrival we were offered a selection of Champagne, wine, cocktails and soft drinks by the lounge staff, who are from Accor-Sofitel. That’s not a one-off for the lounge opening event, in fact luxury hotel brand Sofitel already manage the airline’s Business Lounge at Changi, plus their three other First Lounges in Sydney, Melbourne and Los Angeles.

After picking up a welcome drink we took the opportunity to take a look around the lounge.

Qantas CEO Alan Joyce and his team had already arrived and were mingling with guests.

The layout is very linear. From the entrance a long corridor links the various lounge sections. There is no view to speak of, instead this lounge overlooks the Terminal 1 C gates immigration hall.

If you’ve visited the British Airways Singapore Lounge, this one is effectively the mirror image, with that facility overlooking the D gates immigration hall in an almost identical fashion.

With no external view from this lounge, designer David Caon instead incorporated wooden shutters along the windows across the length of the lounge to instil a feeling of exclusivity and privacy.

These still allow some natural light from the immigration hall to filter through during the day.

Around halfway down the lounge on the left side is the cocktail bar, a perfect place to pick up a drink and then find a comfortable place to sit, assuming you’re not heading straight to the restaurant section.

As more guests arrived the event got into full swing, with the crowd enjoying the drinks and canapés while admiring the space.

Shortly after the event started there was the traditional lion dance, a common performance for new business openings in Asia to bring good luck and fortune.

This really set a fantastic energetic tone for the official opening, even if some of the Qantas bosses looked slightly confused about exactly what was happening!

After the traditional lion dance ceremony, it was time for some speeches from the Qantas management and lounge design teams.

A podium and platform was set up at the far end of the lounge, where the dining area and open kitchen is located.

Here are the key highlights from the speeches: 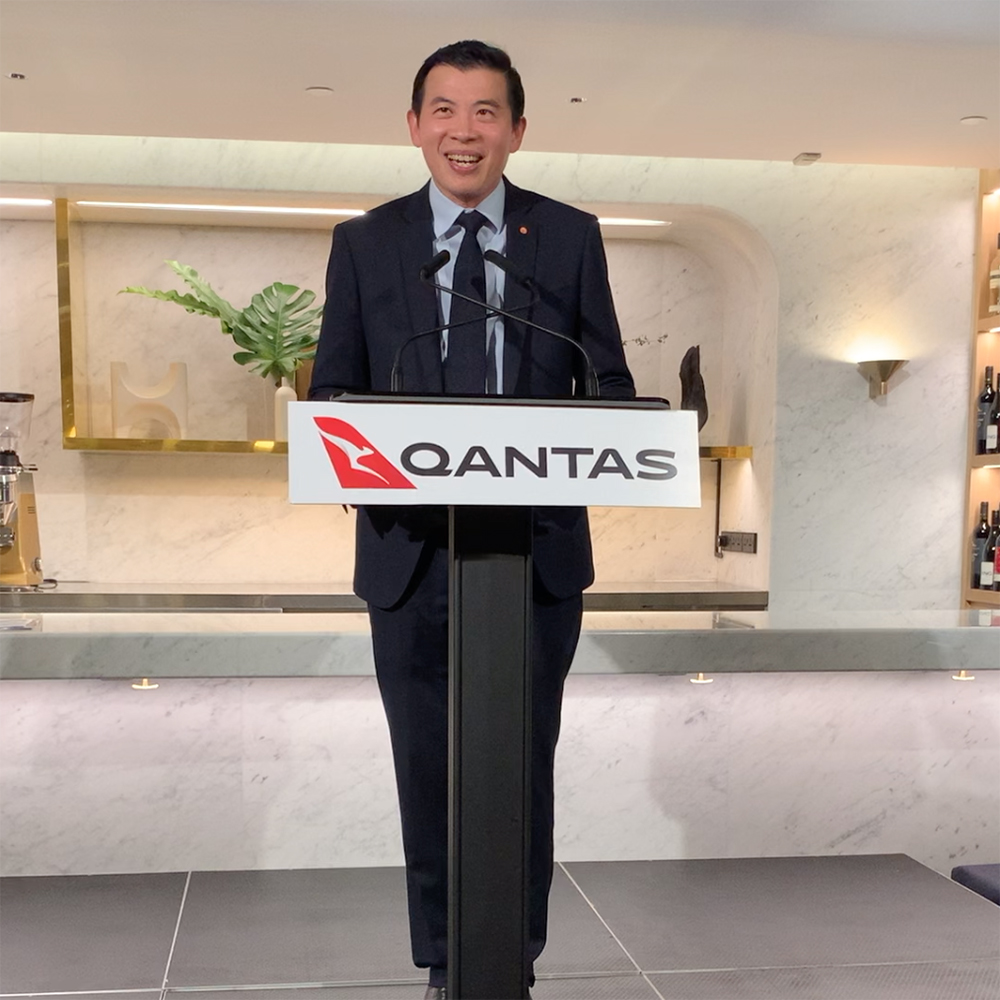 The layout and finish of the new Qantas Singapore First Lounge was led by industrial designer David Caon, in collaboration with Kelvin Ho from Sydney-based architects Akin Atelier.

It’s the first time Caon has been in charge of the design at a Qantas First lounge, with the airline’s other three such facilities in Sydney, Melbourne and Los Angeles at the hands of Marc Newson.

David Caon was at the event and took to the podium after Tino La Spina to describe the design concept used when creating this lounge space. Here’s a summary of what he had to say. 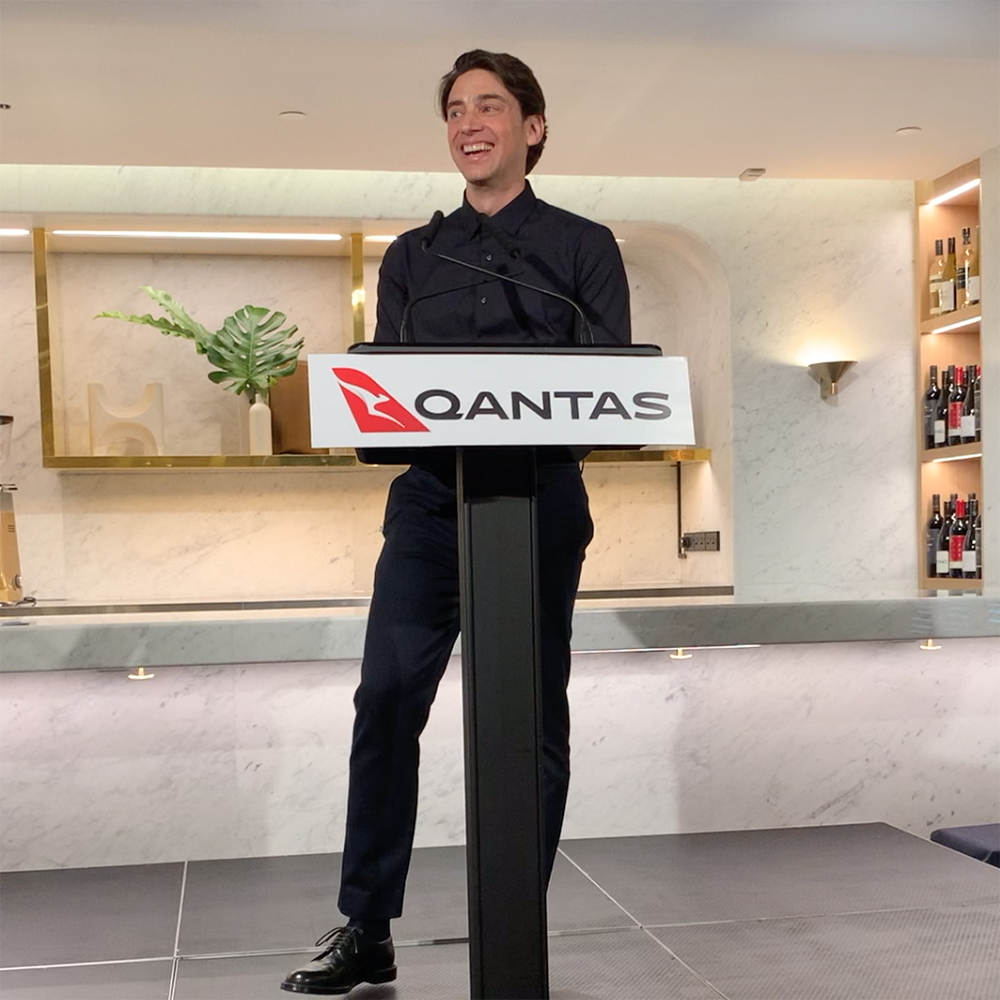 We took a few photos around the lounge and both the design and finish is of an exceptionally high standard, up there with the finest lounges we’ve experienced like Cathay Pacific’s The Pier First Class in Hong Kong.

There are three seating options in the large dining area. Tables mostly set out for two or four diners in lighter pastel colours are located at one side near the shutters, plus bar style seats in a couple of locations then an area in olive green with banquette style seating against the wall.

While there is a large dedicated restaurant area, guests will be able to drink and dine anywhere they like in the lounge, with waiter service provided throughout.

There are also eight large solo seats with high wing sides for privacy, and you could easily take a light meal here too while getting on with some work.

Alan Joyce made a few references to the (presumably high) cost of these chairs, so if you visit the lounge make sure you spend some time in one so that Qantas is getting its money’s worth!

The nine shower suites are impressive, featuring an interesting tiling pattern, an artificial skylight which can be adjusted to three different settings based on your body clock, and LaGaia Unedited toiletries.

Here’s how the adjustable lighting in the shower suites looks:

Qantas lounges are all about the dining experience, and like many others before it the menu here at the Singapore First Lounge is overseen by celebrity chef Neil Perry. Qantas claim its partnership with Perry, which also extends to in-flight catering, is the longest of its kind in aviation history.

During the speeches, Neil spoke about the concepts he used here in Singapore. 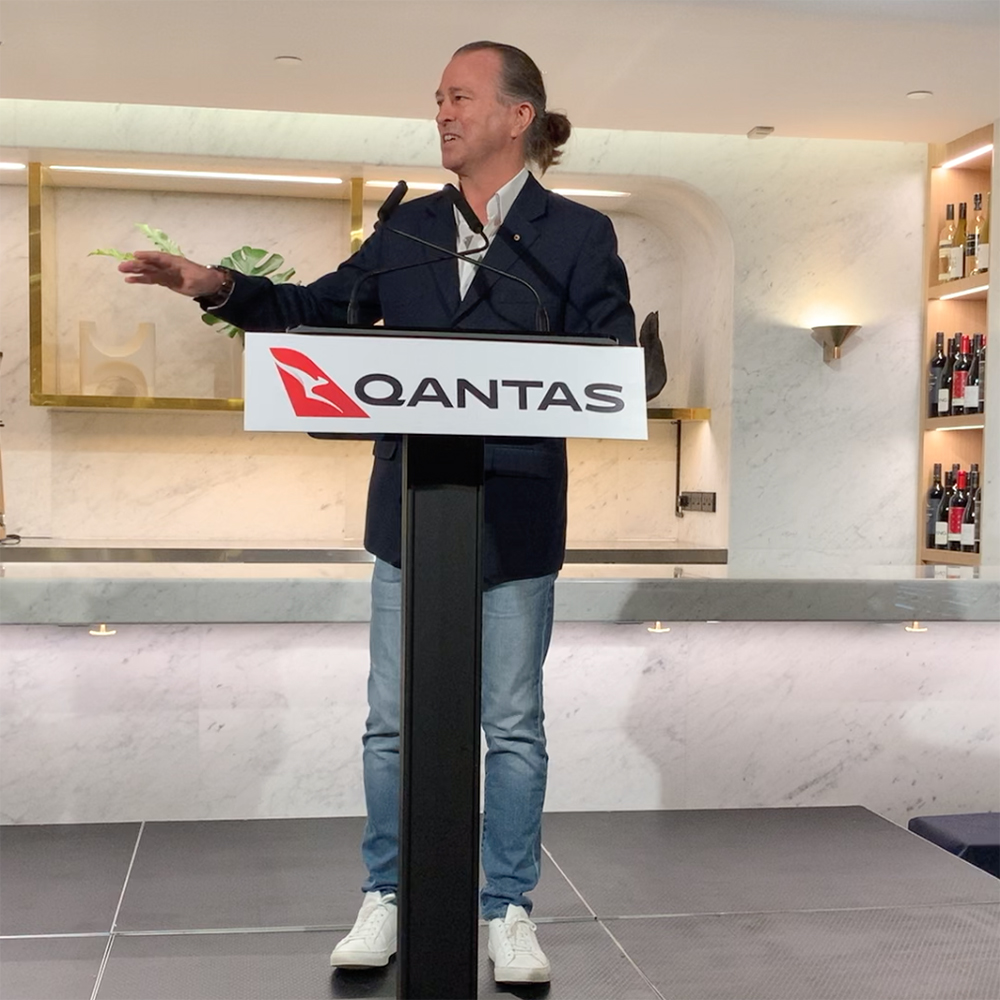 With lounge opening hours of 2.30pm to midnight, Qantas is offering an All Day Dining concept. Mr Perry told us the menu will cycle every three months or so, with new seasonal dishes offered providing some variety to regular lounge visitors.

There are no fewer than 11 main dishes on the à la carte menu, including the signature Qantas First Lounge salt and pepper squid with green chilli dipping sauce and aioli.

Asian tastes are catered for with dishes such as crayfish laksa with rice noodles, bean spouts and egg, and stir fried black pepper beef, served with onion, red capsicum and jasmine rice.

Here’s how the full menu looks, both from a dining and drinks perspective:

The lounge promises “premium dining inspired by Singapore’s vibrant culture”. We were fortunate to be invited to remain in the lounge after the opening event finished, when it became available to regular passengers from 2.30pm, so we took the opportunity to try some of the dishes on offer.

All three dishes, plus the canapés we had enjoyed earlier, were outstanding. True restaurant quality, as you’d expect at a launch party with Neil Perry himself in attendance.

We look forward to checking whether the standard is being maintained when we visit the lounge for a full review later this month.

On the Champagne front while there are no vintage varieties offered, Qantas is pouring a choice of Joseph Perrier, Tattinger Brut Reserve and Tattinger Prestige Rosé in this lounge.

Wines are all from Australia, with five white and five red options, while the cocktail menu is designed by Qantas Rockpool Mixologists. The bartenders will also go ‘off-piste’ if you have a particular request in mind.

The beer menu includes Aussie, local and international options, and there’s an advanced-looking coffee machine at the bar for barista-worthy flat whites and cappuccinos.

We’ll be back in the new Qantas First Lounge later this month for a comprehensive review, since obviously we can’t give our impartial opinion of the true passenger experience during a media launch, nor when the lounge knows we are coming.

That’s in strict accordance with our philosophy, which we know so many of our readers appreciate. When you see “Review:” in the title of a Mainly Miles article, that’s exactly what we mean – the experience you can expect as an everyday passenger or customer.

Stay tuned for our upcoming detailed overview of this new Singapore lounge option.

Mainly Miles also has reviews of the: 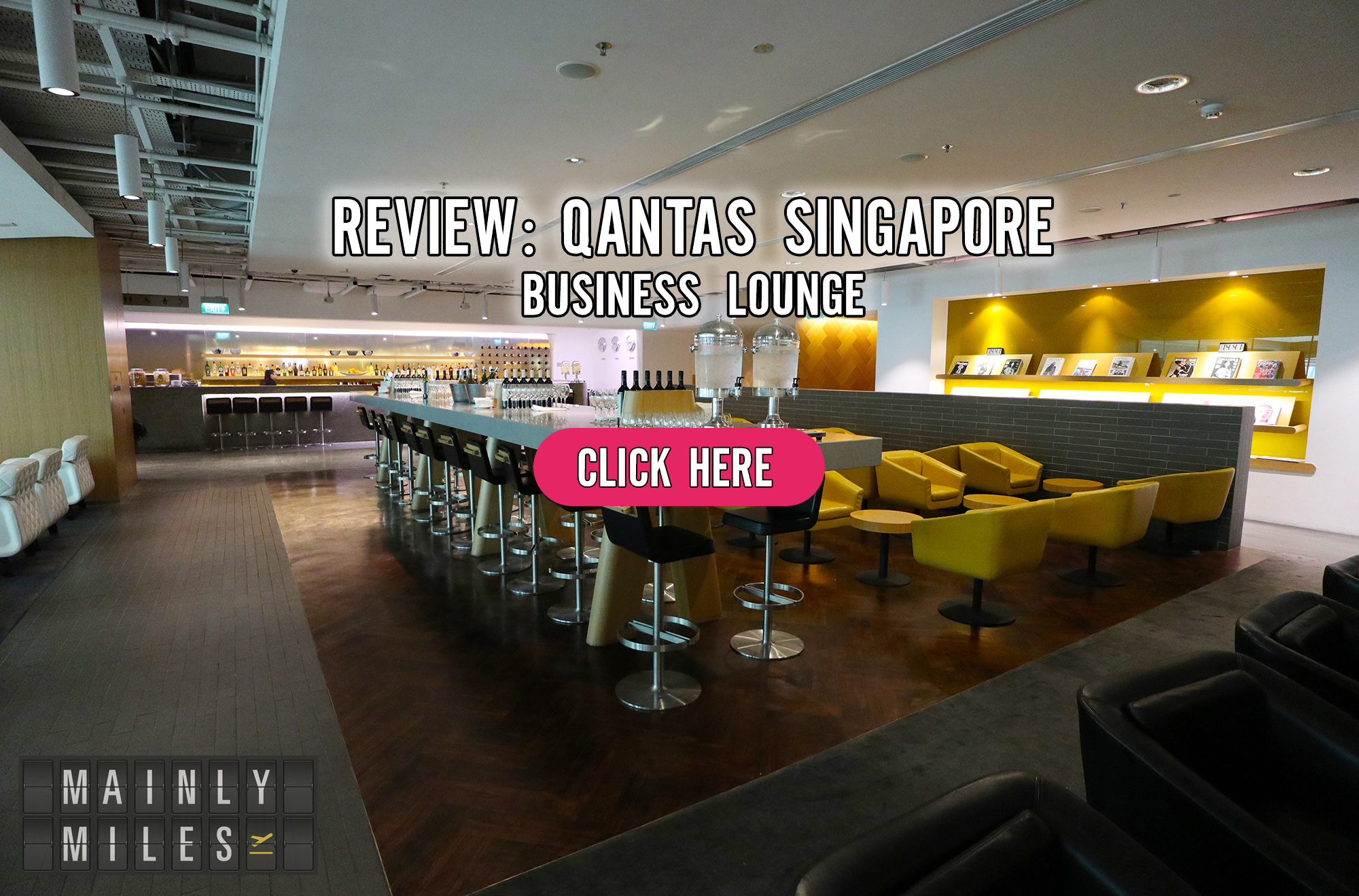 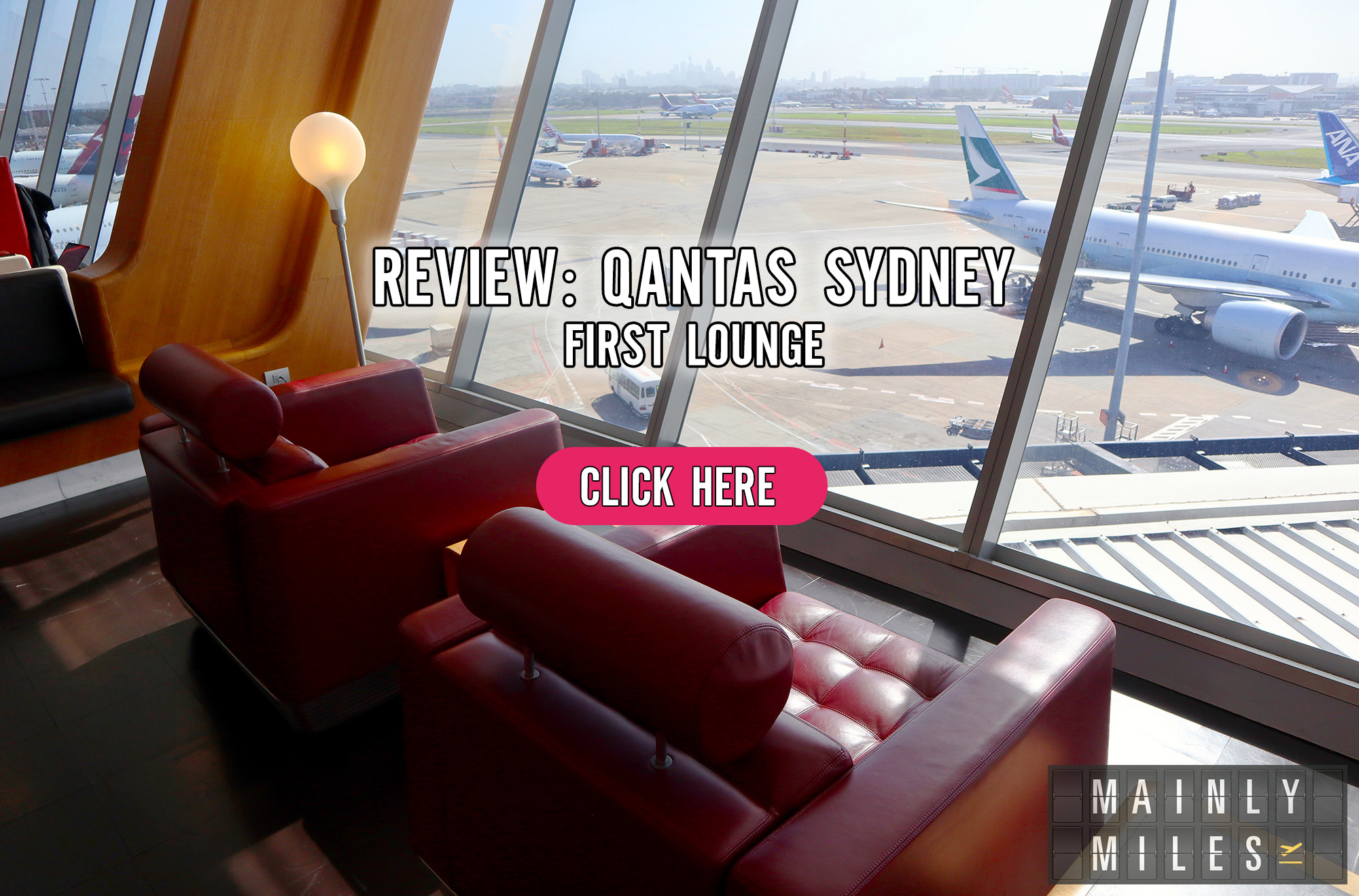 There are also over 290 weekly Jetstar departures from the airport, many of which are timed to allow Qantas Platinum members to access this lounge before their flight.

Speaking of lounge access, provided your journey through Changi coincides with the 2.30pm to midnight opening hours, you’ll be welcome to use this lounge if you’re travelling on a departing flight and meet one of the following requirements:

Flying on a Qantas or Emirates flight, or on a oneworld member operated flight:

Eligible lounge users may also be entitled to a guest allowance, the full policy is available here.

To maximise your experience, you may want to take advantage of Changi’s Early Check-in option. If you’re flying Qantas, for example, you can drop your bags and collect your boarding cards up to 12 hours before your flight departure time at either T1 or the new Jewel facility.

A fantastic, fun afternoon looking around a frankly beautiful new lounge option at Changi Airport. The design may be clean and understated in places (except the showers!), but we believe it caters for the Australian, Asian and international customer profiles quite carefully.

A significant investment has been made in two key areas – food and beverages, with an excellent menu offering a wide range of dishes to suit almost all tastes accompanied by an extensive drinks list, and jet-lag reduction, with several efforts to reduce the stresses of travelling between distant time zones especially the lighting options in the shower suites.

While we’ll naturally reserve final judgement for our upcoming review from a passenger perspective, rather than from a media event, right now this does stand out as probably the nicest airline lounge at Changi Airport.

Singapore Airlines certainly has a lot of catching up to do, with its SilverKris First Class lounges in T2 and T3, and even The Private Room, not really standing up to this level in most aspects (though the T3 ones will be undergoing a refresh in the next two years).

A significant bar has been set by Qantas, and we’re looking forward to our next visit for a full review to make sure it wows everyday passengers too.

Special thanks to the team at Qantas for inviting us along for the launch event. 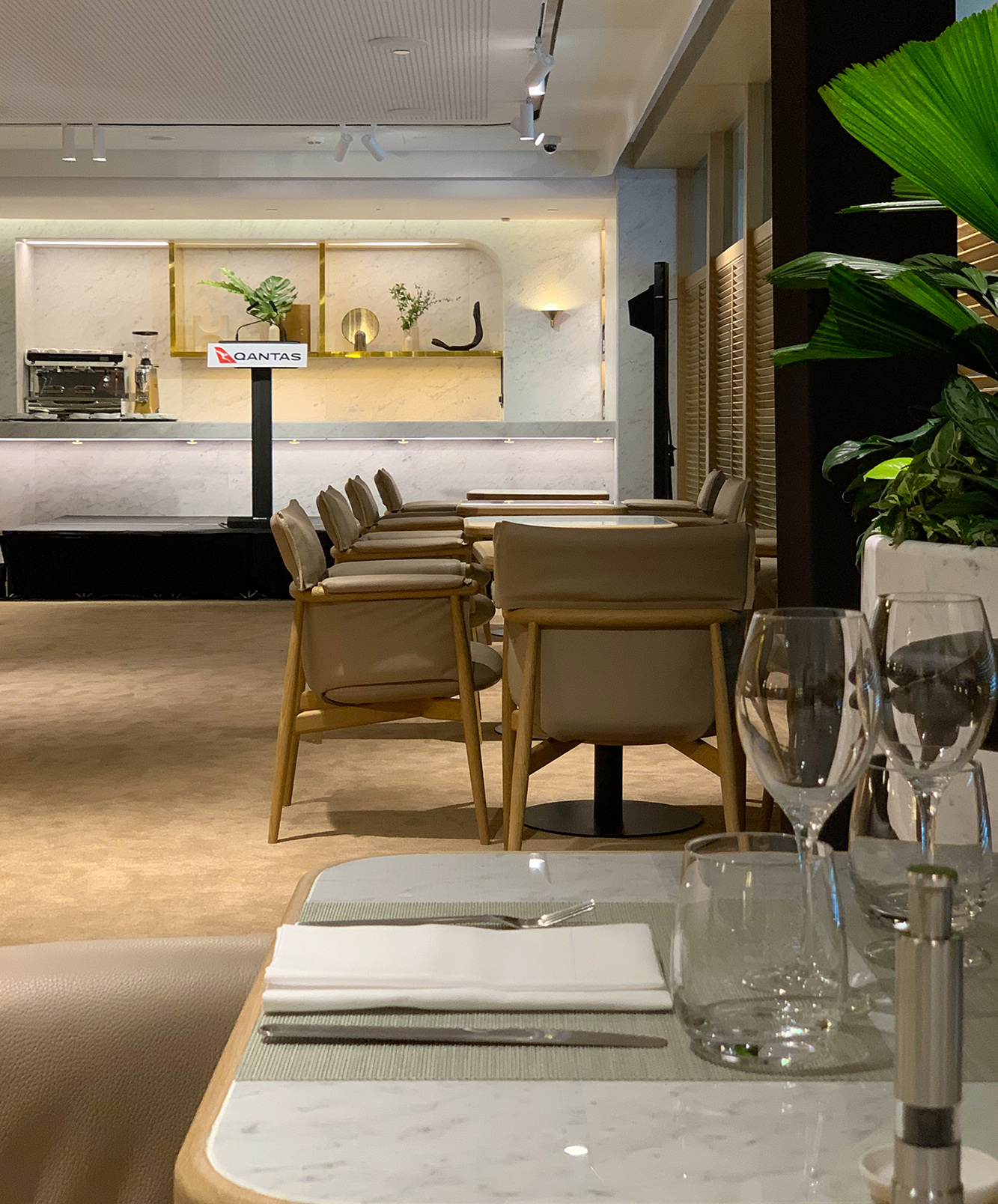