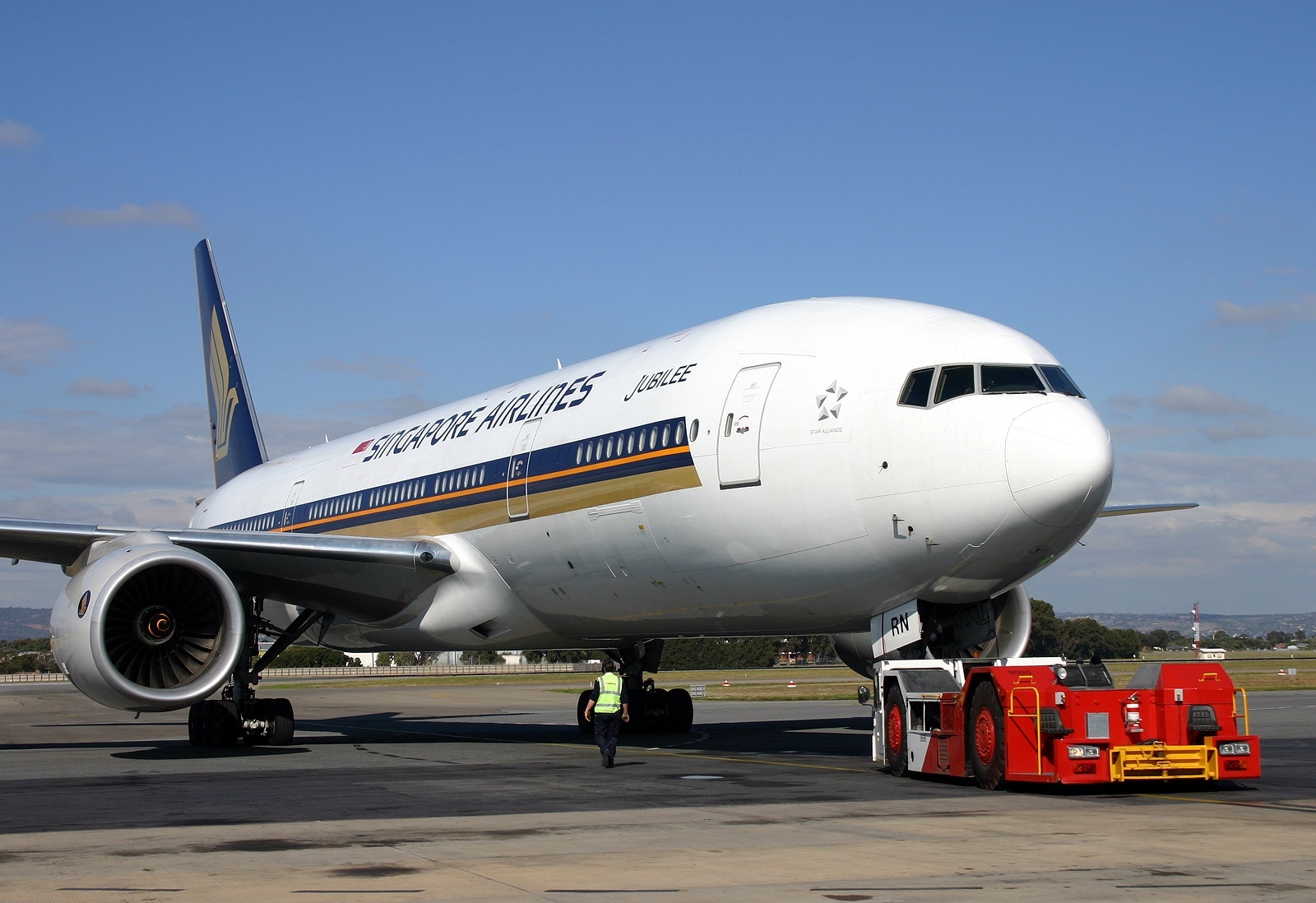 Until the mid-2000's Singapore Airlines assigned a name to each of its aircraft types. Take a step back in time as we remind you what they all were.

If you’ve been flying (or following) Singapore Airlines for at least the last couple of decades then one thing you’ll probably remember, which you certainly don’t see anymore, is a name adorning the forward fuselage of the aircraft you are about to board.

The policy of giving a unique ‘mark’ to each aircraft type in the fleet, popular with aircraft enthusiasts and many passengers alike, started to be abandoned in 2003/04 under the stewardship of (then-new) CEO Chew Choon Seng.

Here’s a little step back in time to recap on what these aircraft, very few of which remain in service today, were called.

Singapore Airlines marketed the Airbus A300, a type it flew for a short period between 1980 and 1985, as the ‘Superbus’, with newspaper adverts in 1981 such as:

What’s not clear though is whether the aircraft ever actually received ‘Superbus’ titles on the fuselage. We haven’t been able to track down any photos showing it, so we assume this was used only as a marketing tagline.

SIA’s Airbus A310s carried the (rather unimaginative) ‘3TEN’ titles below the flight deck windows on each side.

These titles were later removed from the aircraft. We’re not exactly sure when or why, but it looks as though by the mid to late 1990s none of them carried the markings anymore.

The Airbus A340-300s were named ‘Celestar’, with the title used heavily in the aircraft’s branding when they joined the fleet in 1996.

For example, newspaper advertisements for daily non-stop flights to Sydney and Paris that year boasted of “The comfort of the Celestar A340, the most sophisticated Airbus in the world”.

We don’t know exactly why the A340-300s were called ‘Celestar’ (pretty much all of the other aircraft names are meaningful or self-explanatory).

One possibility is that it relates to a previous Singapore Airlines trademark ‘Celestel’, the world’s first global sky telephone service, which launched in September 1991.

Perhaps the A340-300, which arrived in 1996, was the first aircraft type to be fully fitted with the system? This would make some sense as the aircraft was also the first in the fleet with a guaranteed KrisWorld IFE system at every seat.

Otherwise of course it could simply be an adaptation from the word ‘Celestial’, meaning ‘heavenly’ or ‘of the sky’.

Singapore Airlines pioneered ultra long-haul services way back in June 2004, with a record-beating 15,300km non-stop service from Singapore to Newark, taking over 18 hours.

These services were made possible by a brand new fleet of five Airbus A340-500 aircraft, which the airline named ‘LeaderShip’.

Non-stop flights to Los Angeles followed, however the operating economics of using a four-engined aircraft at a time of record fuel prices later led to these services being discontinued in November 2013.

The ‘LeaderShip’ titles didn’t last long in fact, as CEO Chew Choon Seng did not favour the policy, and a revised livery design with larger ‘Singapore Airlines’ titles occupied the space formerly used for them.

The Boeing 747-200B was referred to as the ‘Super B’ in SIA’s advertising, though like the Airbus A300 we can’t find any evidence it was applied to the outside of the aircraft.

This could be another one of those ‘marketing only’ designations.

Singapore Airlines started operating the Boeing 747-300 in 1983, continuing to do so until 2001 when they were eventually replaced by the more advanced Boeing 747-400.

The aircraft had a significantly stretched upper deck compared to the Boeing 747-200, leading SIA to christen it ‘BIG TOP’.

The stretched upper deck accommodated 40 Business Class passengers in a 2-2 layout, compared to 16 passengers in the same format on the Boeing 747-200.

SIA’s 14 Boeing 747-300s really paved the way for a significant international expansion, then perfected by its 43 Boeing 747-400s. They retained the ‘BIG TOP’ titles until retirement.

Perhaps the most well known aircraft name in the Singapore Airlines fleet belongs to the airline’s large Boeing 747-400 fleet. With ‘BIG TOP’ already used, it was ‘MEGATOP’ chosen for what became by far SIA’s largest long-haul fleet of aircraft in the 1990s and 2000s.

The Star Alliance logo took the place of the old ‘BIG TOP’ titles, so the ‘MEGATOP’ branding was moved above the forward upper deck passenger windows.

It lost its ‘MEGATOP’ titles in mid-2006, probably coinciding with a major maintenance check.

Singapore Airlines went for a biblical reference for its Boeing 747-400 freighter aircraft, referring to its fleet as ‘MEGA ARK’, presumably after the story of Noah’s Ark.

These titles were removed with a similar timescale to the Boeing 747-400 passenger fleet, disappearing between 2003 and 2005.

SIA’s first Boeing 777s arrived the same year the airline was celebrating its 50th anniversary since it was founded as Malayan Airways, which commenced operations with single pilot six-seater wartime planes on 1st May 1947, flying (then) domestic flights between home base Singapore and Kuala Lumpur, Ipoh and Penang.

Half a century later the airline marked the first delivery of its far more technologically advanced Boeing 777-200ER aircraft by naming the new fleet ‘Jubilee’.

Some Singapore Airlines aircraft types never received a name, either because they left service before the naming policy began, or for the more recent types because they entered service after naming ceased.

The special 50th anniversary paint job made its way to several aircraft in the fleet in the late 1990s, including this Boeing 747-400 (9V-SMZ).

There were then the pair of ‘tropical’ liveried Boeing 747-400s, which had an elaborate paint scheme applied in September 1998 to promote the airline’s latest First and Business Class products.

Those were the long-gone ‘Skysuite’ First Class and Ultimo Blue / Purple recliners in Business Class. How times have changed!

Unfortunately one of these aircraft, 9V-SPK, crashed while attempting to takeoff on a closed runway at Taipei in October 2000.

Sister ship 9V-SPL, which also had the tropical livery, was removed from service and repainted back into standard SIA colours after the accident.

Finally in June and July 2015 a pair of the airline’s flagship Airbus A380s, 9V-SKI and 9V-SKJ, were painted in a commemorative livery to celebrate Singapore’s 50th anniversary of independence.

The aircraft were returned to their usual colours by mid-2017.

The only SIA division that now names its aircraft is Scoot, though the format here is a little different. The low-cost carrier assigns a more ‘fun’ name to every individual plane in its fleet, in line with its ‘cheeky’ marketing image.

Going back to the days of Singapore Airlines naming its aircraft means (alarmingly for us at least) going back a good couple of decades. We did enjoy them though, and it was sad to see them go.

It’s not totally clear why Singapore Airlines’ aircraft naming policy was abandoned, though it almost certainly came about among other changes made by then-CEO Chew Choon Seng, who also re-assigned ‘Raffles Class’ into the more internationally generic (and arguably necessary) ‘Business Class’ title.

Did you ever fly on a ‘named’ Singapore Airlines aircraft, and do you miss them? Let us know in the comments section below.