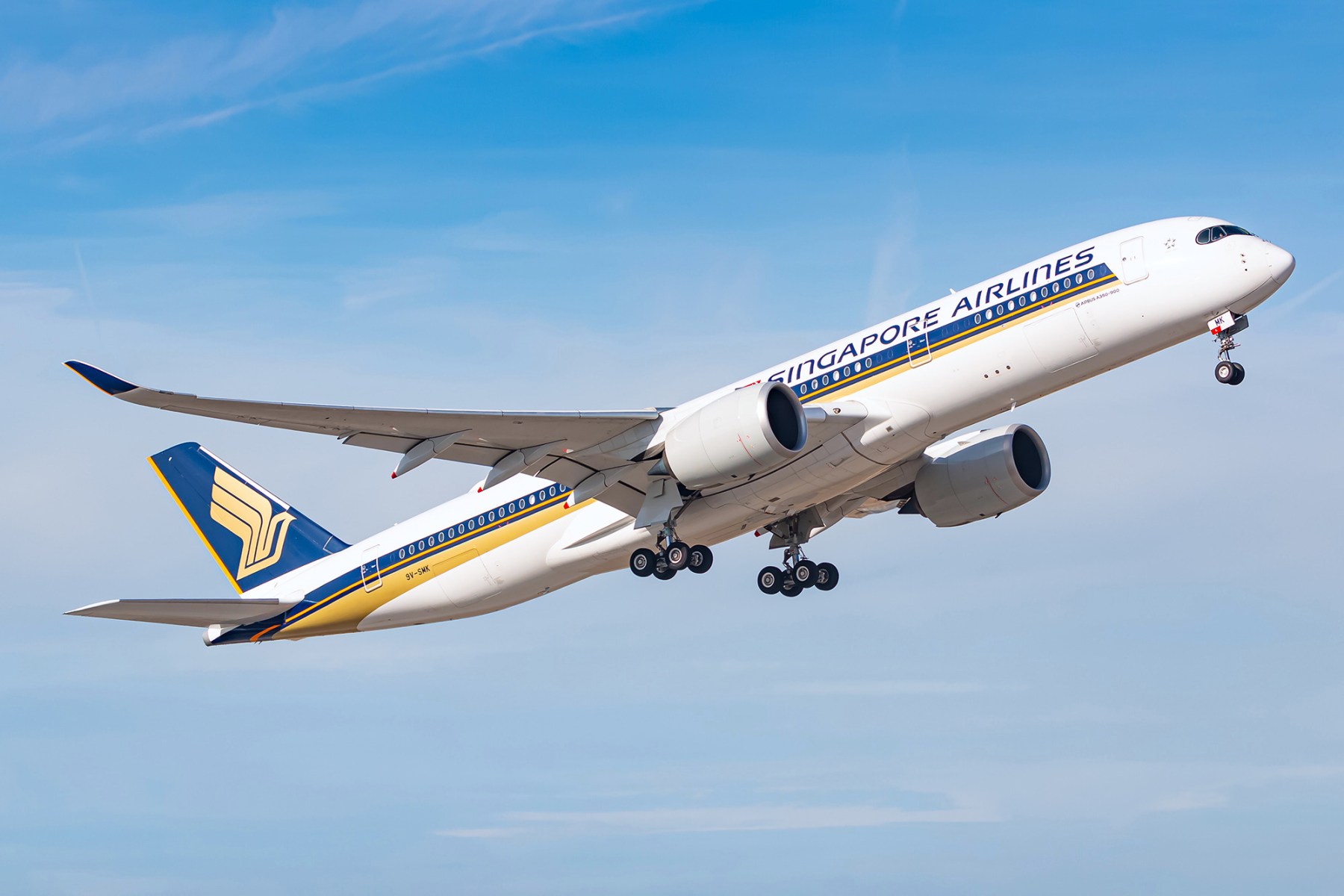 This month Singapore Airlines took its first new aircraft deliveries since February 2020, with not just one but four Airbus A350 Regionals winging their way from Toulouse in the last couple of weeks. Meanwhile another Airbus A330 was returned off lease and the operating schedule of revenue services occupied around half the passenger fleet, based on data for the last two weeks.

That said, a few Airbus A380s have been reactivated for the airline’s latest on-ground activities, repurposed as restaurants and accommodating around 3,500 of the airline’s fans lucky enough to secure a ticket for the events running over two weekends.

In terms of the flying fleet though, five aircraft types remained firmly out of service in October, including all Airbus A330s and Airbus A380s.

The official registered aircraft data in combination with analysis of actual flight movements over the last few weeks allows us to determine the actual ‘in service’ fleet (available to the airline) of 124 planes at 25th October 2020, 54 of which are currently active.

No longer in service (but still legally registered at 30th September) 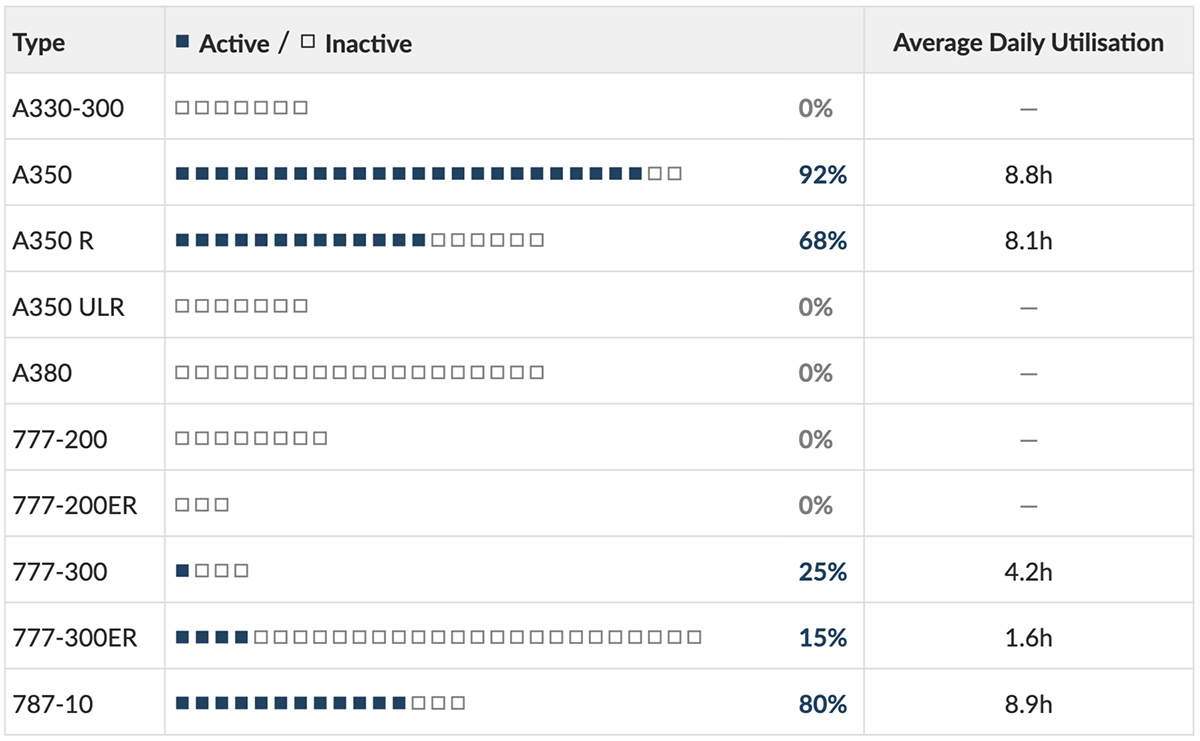 Utilisation of the single Boeing 777-300 in service increased again this month, starting at just 1.5 hours per day in August to 3.6 hours per day in September and 4.2 hours per day in October, as the aircraft (9V-SYJ) added regular Bangkok flights to its regular Yangon and Surabaya schedule.

The small number of active Boeing 777-300ERs continue to fly only a handful of times a week based on data from the last 14 days, mostly cargo-only services to and from Beijing, generating the lowest average daily utilisation of 1.6 hours.

Airbus A350s and Boeing 787s on the other hand are far busier, with the active aircraft in those fleets clocking up eight to nine hours per day on average, as they were in September.

Interestingly, despite the airline announcing reinstatement of the world’s longest passenger flight between Singapore and New York next month, the seven Airbus A350 ULRs in the fleet will remain in storage at Changi with 3-class Airbus A350s instead used for the service.

This will allow the airline to offer Economy Class on the route, also prioritising cargo while passenger volumes remain low, though overall the aircraft will be significantly weight restricted especially on the New York – Singapore flight.

Airbus A330-300 9V-SSC was deregistered in early October and returned to its lessor, San Francisco-based BBAM Aircraft Leasing & Management.

It is now registered in Guernsey and flew from Changi to Tarbes–Lourdes–Pyrénées Airport (LDE) with registration 2-SSCA on 15th October 2020, where it will likely be stored.

The aircraft was delivered new to Singapore Airlines on 25th July 2014. It last flew passengers on 27th March 2020, from Surabaya to Singapore as SQ931, as the airline moved to almost completely shut down operations due to the effects of the COVID-19 outbreak.

After nearly eight months without any new aircraft deliveries, October 2020 was a relatively busy month with Singapore Airlines taking delivery of four new Airbus A350 Regional aircraft in the space of less than a week.

These deliveries bring SIA’s total Airbus A350 fleet to 52 aircraft, by far the largest in the airline, 19 of which are in the regional configuration.

It’s not clear if SIA intends to bring these four aircraft into service anytime soon. At the time of writing they have not yet flown any revenue flights.

Fun fact: These deliveries make Singapore Airlines the joint-largest operator of the Airbus A350 worldwide, with Qatar Airways also having 52 in its fleet.

Almost all of the airline’s Airbus A350 fleet is in regular service, with the exception of the 7 ULR aircraft which remain stored at Changi, due to their premium-heavy, cargo-light configuration.

November and December 2020 will boast the busiest passenger schedule for Singapore Airlines services since most flights were cut in April 2020 due to the COVID-19 pandemic.

By the end of the year, 35 passenger routes will be served with over 300 weekly flights offered. The latest cities on the list include Fukuoka, Brunei and New York.

There are also eight SilkAir routes by December, plus 18 Scoot routes, though in both cases there is some overlap with existing SIA destinations.

A large chunk of Singapore Airlines flights using passenger aircraft continue to fly cargo (with some earmarked only to do so), necessitating an increased fleet compared to the headline ‘capacity’ percentage.

Here’s how SIA’s passenger fleet activity looked on 22nd October 2020, which gives us an indication of which aircraft are stored (last flew 14+ days ago), compared to those either active or in ‘active storage’ (last flew more recently).

All the airline’s Airbus A330 aircraft remain stored in Singapore. None have flown passenger flights for close to seven months.

As mentioned earlier in the article, 9V-SSC was returned to its lessor in October. The A330s are all due to leave in the next year or so and will almost certainly not operate passenger flights for the airline again.

9V-SSI has not made an appearance, even on a test flight, since sustaining tail damage during a landing accident in November 2019.

Only two of SIA’s Airbus A350-900s (in 3-class long-haul configuration) are stored at Changi, or potentially undergoing maintenance, with the other 24 aircraft deployed on at least one flight in the last 14 days.

On average, each active aircraft in this fleet is currently flying six flights per week.

There continue to be two Airbus A350-900 Regional aircraft in storage / maintenance, in addition to the four recently delivered aircraft, which have yet to enter service (assuming they will do so in the near future).

Overall 13 of this variant were flying over the last two weeks, each operating an average of ten flights per week.

All the airline’s 7 Airbus A350-900 ULR aircraft remain stored in Singapore, having not flown any passenger services since March 2020.

These aircraft have been conducting short functional check flights at Changi, however there appears to be no intention to return them to regular passenger service.

Non-stop SIA flights to and from Los Angeles continue to be operated by 3-class long-haul Airbus A350-900s. As we mentioned earlier in the article, this will also be the case for the airline’s reinstated non-stop New York services from November 2020.

Seven of the airline’s flagship Airbus A380 aircraft are now in long-term storage at Alice Springs, with the other 12 aircraft stored at Changi.

No revenue flights with the A380s have been flown since March 2020, and they are not being used in the current schedule through 31st December 2020.

9V-SKN has now been refitted to Version 3 cabin configuration, with the latest Suites and Business Class seats, bringing the variant to a total of eight A380s. We toured through the aircraft only yesterday as part of the Restaurant A380 @Changi experience, with photos shared on our Facebook post below.

It’s unclear whether any further SIA A380 aircraft will be refitted.

You can read our recent review of the Restaurant A380 @Changi dining experience in Suites Class here.

SIA’s recently inherited set of seven Boeing 777-200s from NokScoot are now stored in Alice Springs, with one registered aircraft hibernating at Changi.

Last flight and number of days shown reflects last passenger service with NokScoot in the case of SRF to SRQ. All these aircraft are for disposal.

All 3 of the airline’s Boeing 777-200ERs are stored in Alice Springs, likely to be a long-term arrangement.

In its full-year analyst briefing, Singapore Airlines effectively wrote off the Boeing 777-200 and -200ERs, with no chance for their return to the active fleet.

Only a single Boeing 777-300 (9V-SYJ) continues to operate occasional cargo-only flights and some passenger services to and from Surabaya and Bangkok.

These aircraft are now mostly dedicated to cargo-only operation in the current schedule through 31st December 2020, having ceased almost all passenger services in June 2020.

On average the four active Boeing 777-300ERs in the fleet are flying only two flights per week.

Three of SIA’s 15 Boeing 787-10s are currently inactive, with the remainder flying a mixture of passenger and cargo-only flights.

One aircraft, 9V-SCI, was relocated to Victorville, California on 6th October 2020. The aircraft is one of 8 worldwide affected by a manufacturing defect in its tail, and will be repaired by Boeing in the USA.

No other 787s in Singapore, including those registered to Scoot, are affected.

On average, each active aircraft in this fleet is currently flying 12 flights per week.

29 Singapore Airlines Group aircraft are currently in long-term storage at Alice Springs airport in Australia, where the hot, dry climate is far more conducive to preservation.

These include SilkAir’s Boeing 737 MAX 8 jets, which have been grounded since mid-2019, and some Scoot aircraft.

The SIA Group still has large order books with Airbus and Boeing for its fleet modernisation and replacement strategy over the next few years. These comprise:

Singapore Airlines is currently in negotiations with Airbus and Boeing to reduce its new aircraft intake, potentially spreading out this large commitment for 136 additional new aircraft across a longer time period.

“We continue to engage aircraft manufacturers to negotiate adjustments to the delivery stream of existing aircraft orders and the schedule of progress payments to reduce near-term cash outflows. We have reached an agreement with Airbus on some of these matters and discussions with Boeing are ongoing. This will help to moderate fleet growth in the near term.”

At least 12 Airbus A350s and 3 Boeing 787-10s alone were originally scheduled to join the fleet during this financial year. We wouldn’t be surprised to see those totals more than halved, given what other airlines seem to be negotiating with the manufacturers.

There’s still no official word from the airline on how its capital expenditure on new aircraft purchases has been reduced yet, but we’ll be sure to report once they do so, hopefully with some concrete fleet numbers.

Cathay Pacific recently announced it had deferred its Boeing 777-9 order to “beyond 2025”, so we expect to hear similar news from SIA, perhaps as part of the upcoming half-year financial results in early November 2020.

Stay tuned for the next fleet (and aircraft storage) update in November 2020.