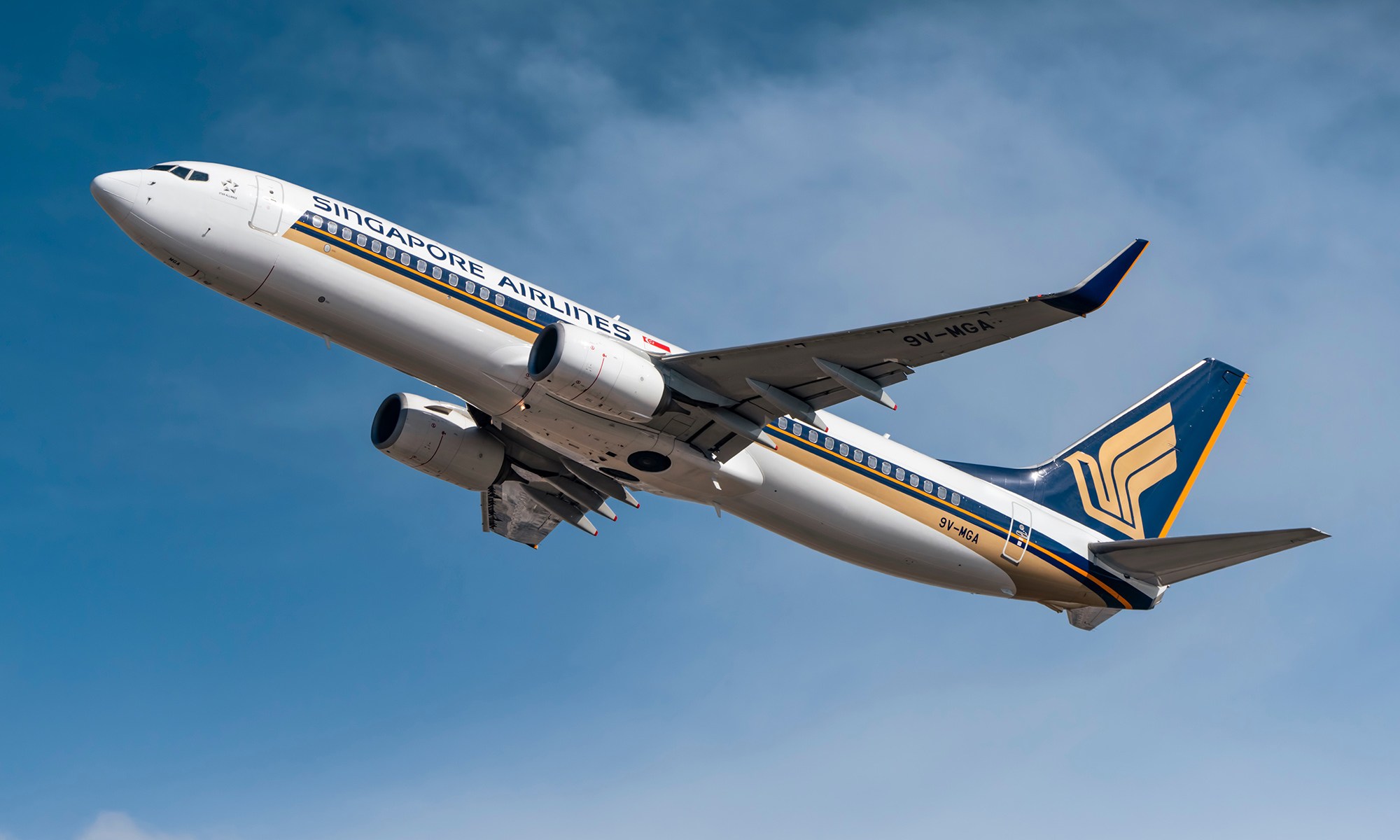 This month saw Singapore Airlines mark the start of a new era as far as its aircraft fleet is concerned, with the introduction of its first narrow-body (single-aisle) passenger aircraft in over 30 years. That came about as the first four of nine ex-SilkAir Boeing 737-800s entered service with the mainline division.

An additional Boeing 737 MAX aircraft also returned to Changi from Alice Springs, meaning half that fleet has now been brought home to undergo the long-awaited cabin refits, including flat-bed seats in Business Class.

Meanwhile the wide-body fleet renewal process continued, with a pair of Boeing 777-300s leaving, another A330 set for departure to pastures new, and a trio of brand new Airbus A350 Regionals looking primed for imminent delivery.

The official registered aircraft data in combination with recent retirement announcements and analysis of actual flight movements over the last few weeks allows us to determine the actual ‘in service’ fleet (available to the airline) of 110 planes at 28th March 2021, 80 of which were recently active.

This reflects a future fleet of 110 aircraft, plus future near-term deliveries of Airbus A350s and Boeing 787-10s.

There will also be an unknown number of Boeing 737 MAX 8s joining the fleet in 2021, as the SilkAir merger enters its final stage, while five more Boeing 737-800s will be temporarily added.

Almost all Airbus A350s and Boeing 787-10s remain in consistent use, alongside the four recent Boeing 737-800 deliveries, while the deployment of Boeing 777-300ERs has risen to around a 40% of that fleet.

Overall the airline was actively using a total of 80 aircraft in March 2021, its highest total since the COVID-19 pandemic began.

Here’s a look at how busy each aircraft fleet has been, based on active aircraft over the seven-day period from 21st March to 27th March 2021.

Airbus A350s are the current ‘workhorses’ in terms of daily flying hours, though the Boeing 787s are operating the highest number of flights per aircraft per week.

Boeing 737s are back in the SIA fleet

Three Boeing 737-800s were formally registered to Singapore Airlines as of 28th February 2021:

9V-MGA entered service first, on 4th March, followed by 9V-MGD on 7th March and 9V-MGB on 11th March, all three of which made their inaugural passenger flights with SIA to and from Phuket.

On 17th March, 9V-MGE also joined the fleet as the fourth Boeing 737-800, launching flights to and from Phnom Penh.

The current route network for the Boeing 737-800s covers four cities, with six more set to join over the coming months and further announcements likely.

Recently confirmed additions include a daily Kuala Lumpur service from mid-April, supplementing a daily Boeing 777-300ER flight on the route, plus Penang flights from the start of the northern winter season.

There is also the potential for frequency increases on the Phuket route, following news that the resort island plans to open for tourism from July 2021.

Ultimately nine Boeing 737-800 aircraft will be joining Singapore Airlines from SilkAir, with the others set for disposal as the regional wing is gradually wound up in the months ahead.

The SIA Group has put seven of the eight aircraft set for disposal on the market recently through UK-based agent Skytech-AIC, as listed in the table above.

The aircraft are listed as available from July 2021, suggesting the SilkAir merger is set to be completed soon.

Another 737 MAX has been brought home

Just this week the third of six SilkAir Boeing 737 MAX aircraft has been returned to Singapore from storage in Alice Springs.

SIA recently confirmed that these aircraft are now undergoing their cabin refits in the hangar at Changi, in preparation for their return to service once local regulators approve their recertification.

The MAXs are expected to eventually replace SIA’s Boeing 737-800s, for a consistent product and service offering across the narrow-body and wide-body fleets.

No timescale has yet been stated for the 737 MAX service re-entry in Singapore.

All four Airbus A330s remaining in the fleet have left service for return to their respective leasing companies, a process that should finish in Q3 2021.

9V-SSF operated a test flight in all-white livery on 18th March and should be next to leave. The aircraft has no known onward operator.

9V-STC, which had become C-GHKC with Air Canada in late December 2020, finally left Singapore on 19th March. It flew from Changi to Montreal, via Tokyo.

9V-SSI has yet to make a test flight appearance after sustaining tail damage during a landing incident at Yangon in November 2019. The aircraft was ferried empty to Singapore over 15 months ago in mid-December 2019, but has not flown since.

There are currently two Airbus A350-900 Regional aircraft in storage or maintenance (9V-SHE and 9V-SHF), meaning 17 of this variant were flying recently.

All of the airline’s Airbus A350-900 ULR aircraft are in service, covering daily San Francisco and New York JFK services.

Seven of the airline’s Airbus A380 aircraft are now in long-term storage at Alice Springs, with the other 12 aircraft stored at Changi.

No revenue flights with the A380s have been flown since March 2020, and they are not being used in the current schedule through 31st May 2021.

There looks to be no imminent return for the superjumbo fleet, though SIA has confirmed 12 of the aircraft will be remaining under current plans for the post-COVID recovery, all to be fitted with new cabin products.

All four of the initial nine Boeing 737-800s moving across from SilkAir to Singapore Airlines are currently in service.

In 2020 SIA inherited back a set of seven Boeing 777-200s it was leasing to the now-defunct NokScoot. These aircraft are now stored in Alice Springs, with one additional aircraft hibernating at Changi for a couple of years now.

Last flight and number of days shown reflects most recent passenger service with NokScoot in the case of SRF to SRQ. All these aircraft are for disposal.

Meanwhile all 3 of the airline’s Boeing 777-200ERs are stored in Alice Springs, and are confirmed as for disposal.

There has been some movement for the retired Boeing 777-300 (non-ER) fleet since the last update.

This leaves only two Boeing 777-300 aircraft still to leave the fleet.

While the 777-300ER fleet is predominantly operating cargo-only flights, there are some passenger services to cities including Bangkok and Kuala Lumpur, being sold as a two-cabin configuration (First Class and Premium Economy are not offered for sale).

All of SIA’s 15 Boeing 787-10s are currently active, flying a mixture of passenger and cargo-only flights.

With the remaining three SilkAir Boeing 737 MAX 8 aircraft due to leave the Alice Springs storage facility in the coming months, it will be interesting to see if the SIA Group retains its parking spots at the airport, which could perhaps mean more mainline aircraft like Airbus A380s or Boeing 777s heading south for better defence against the elements.

The latest SIA Group orders for fleet modernisation and replacement is as follows.

Additionally, Scoot has committed to taking 10 Airbus A321neo aircraft through leasing companies over the coming months, for a total of 16 such aircraft including its six firm orders.

Confirmed upcoming Airbus A350 deliveries for SIA include:

This will increase the A350 Regional fleet to at least 22, though as you can see there is also another 3-class version in the mix, which will be the 27th such variant.

The three A350 Regional models (SHT, SHU and SHV) appear to be for imminent delivery. All three have completed their customer acceptance flights, so we expect them to be flown to Singapore in April.

Boeing 787 deliveries seem to be on hold for the time being.

March 2021 will go down in history for marking the return of narrow-body passenger aircraft in the Singapore Airlines fleet.

With 37 fuel-efficient Boeing 737 MAX aircraft set to join the carrier in the months and years ahead, it looks likely this strategy is set to stay even long after the ex-SilkAir Boeing 737-800s have departed.

Fleet renewal plans continue, with Boeing 777-300s and Airbus A330s departing and brand new aircraft lining up to replace them. While this continues to be an expensive exercise for the group, it should give them a modern efficient fleet with the newest cabin products to respond to the COVID-19 recovery as it happens.