Skip to content
Our 'regional business' experience on a Bangkok to Singapore flight.

The current generation regional business class seat in the Singapore Airlines fleet is fitted to all A330-300 and 777-300 (non-ER) aircraft, and to some 777-200 aircraft. While this regional business class seat will start to be replaced in 2018 by a brand new seat on the 787-10, and possibly some A350s in ‘regional’ configuration, you can still expect to see this existing product hanging around for a considerable period of time.

Australian Business Traveller already lifted the lid on the new seat type chosen by SIA for the future regional business class, starting with the Boeing 787-10 next year. However the final colours and design are likely to be highly customised by the airline compared with the standard designs shown, and the seat is set to be formally revealed in early 2018.

We have a full rundown of our expectations of the replacement Boeing 787-10, which will form the backbone of the future regional fleet in SIA, and you can read it here.

As with our outbound flight with Cathay Pacific (full review here), cash fares in business class on this route are pretty steep for the length of flight (approx. S$600), so redeeming a business saver reward gets you reasonable value at around 2.9 cents per mile.

Pro Tip: If you are going to book this flight, a few services are operated daily by the 777-200. They are all configured differently and so you need to check the seat map, then make reference to our 777-200 and 777-200ER fleet guides. You could end up lucky with the 2006 J product, configured 1-2-1 instead of the regional business, configured 2-2-2, and covered in this review. Avoid the old recliner business seats, a 2-3-2 configuration, which still exist on this route. If you are flexible with your departure time – pick the 1-2-1 configuration flight.

Opened in May 2017, see our review of this lounge here. Like most Singapore Airlines lounges – good, but not great.

The best aspect of the lounge is its location – directly opposite the gates usually used by Singapore Airlines.

The Singapore Airlines A330 has an interesting backstory. Introduced in January 2009, it was designed as a stopgap for temporary regional capacity, and the short-term intentions of the fleet led SIA to move away from purchasing these aircraft outright, their normal policy at the time, and instead take the aircraft on five-year leases.

The A330 featured the brand new regional business class, in 2-2-2 configuration with all leather lie-flat beds. Singapore Airlines liked the aircraft so much, they went on to order 15 more in June 2011 and it subsequently became the second largest fleet in SIA.

The A330 is now being phased out as the newer, bigger, more fuel efficient 787-10 takes its place from April 2018. Some have also made way for the new A350 aircraft, and Singapore Airlines currently has no plans to order any more A330s. 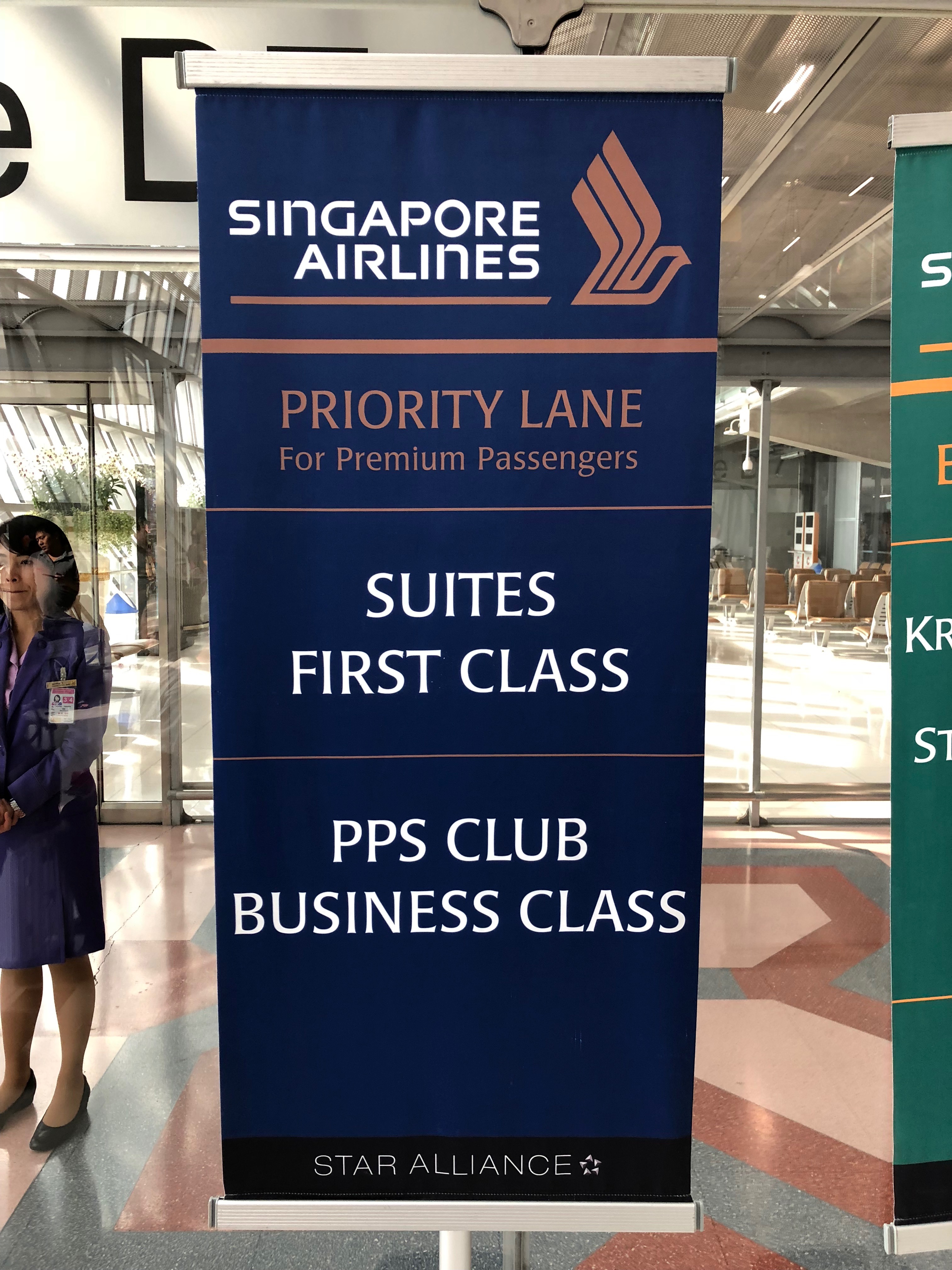 A short walk, directly across from the lounge, took us to gate D7 for boarding.

Two airbridges in Bangkok mean the front door is dedicated for business class passengers only.

Even at airports like Malé, where you can expect to board by air-stairs, Singapore Airlines will attach two sets of steps to provide a dedicated boarding door for business class passengers, and also avoids the entire economy cabin boarding through the business class cabin.

That sounds like a small issue, but it can be quite frustrating if you are trying to arrange your things and stow away your bags in the overhead lockers (which you must do in this aircraft due to the lack of bag storage in the seat), so the dedicated boarding route is welcome. 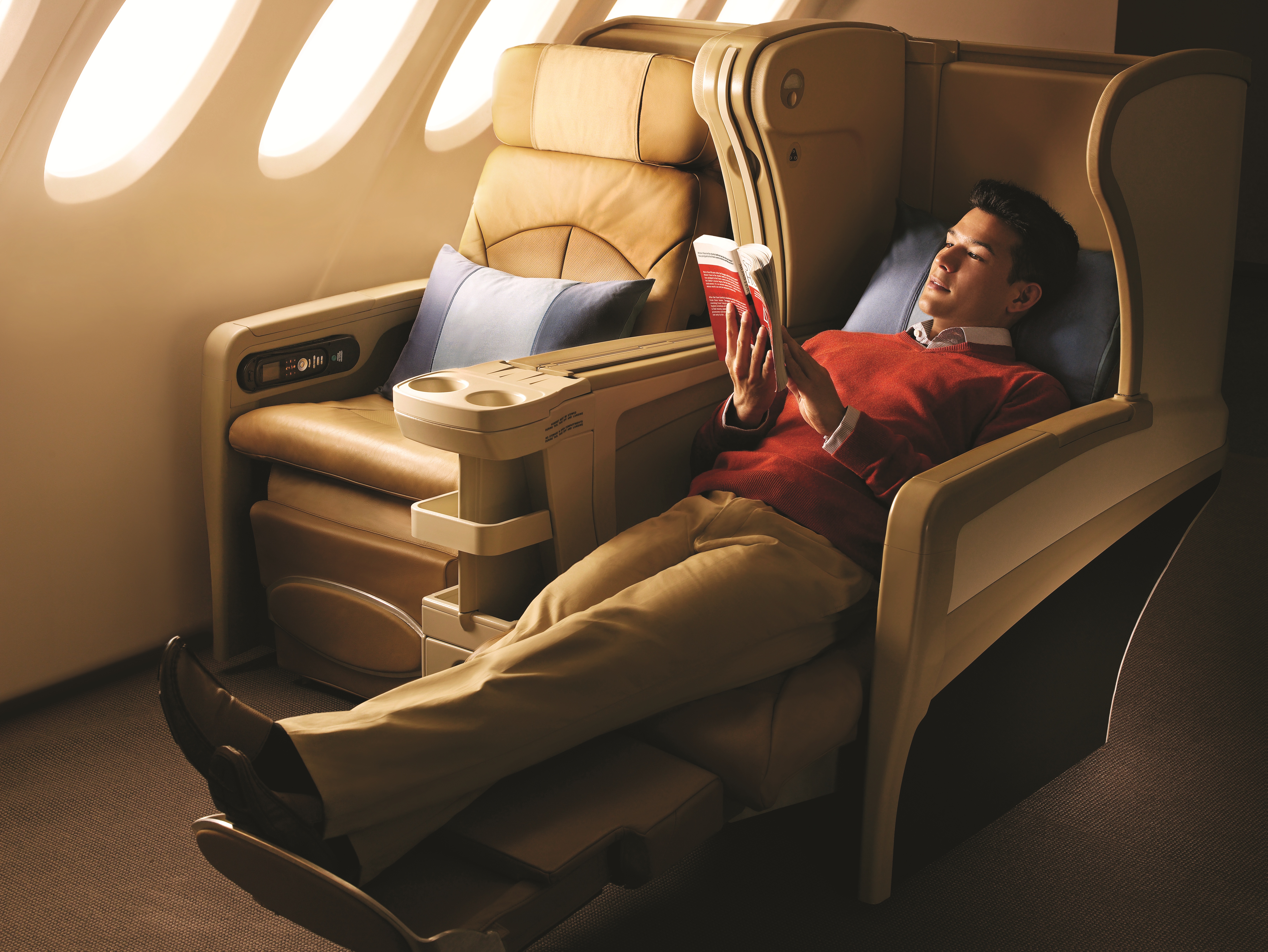 If you’re travelling in business class on the Singapore Airlines A330 by yourself, you will struggle a little for privacy. The 2-2-2 configuration means that you will have to choose between unrestricted aisle-access (a D or F seat), or a window view (A or K).

Personally, we recommend avoiding the window seat in favour of the aisle for unrestricted access. If you are looking for uninterrupted sleep, book another airline, this seat is not good for sleeping!

Whilst the seat is “lie-flat” don’t be mistaken for thinking the bed is in a perfectly horizontal position. This is an industry term for a seat that is flat, but in fact sits at an angle to the floor so that your feet fit underneath the seat in front.

In this case, it’s a 172-degree angle (almost, but not quite flat), and if you are trying to sleep it can feel like you are slipping down into the foot well!

If you are travelling as a couple, any of the pairs are good. Just choose if you would rather have a window pair (A/C or H/K) and step across each other, or both have aisle access in the middle pair (D/F).

We tend to avoid row 11, the first row in this cabin. It’s the infant bassinet row so you may end up along side a younger (noisier!) passenger. Also, the IFE screen is mounted on the bulkhead and you lose some of the useful seat-back storage cubbies.

The toilets are at the back of the business class section, but the front galley is where the entire service for the 30 business class seats is conducted from – this means row 11 tends to suffer from some more service noise, but not too much foot traffic.

Row 16 should be avoided where possible due to proximity of the two toilets, situated immediately behind this row.

Taking the above into account – we usually opt for row 12-14 when it’s available.

Travel Tip: If you are travelling alone, all is not lost. A fairly sizeable privacy screen is available between all seats. Go for a D or F seat for unrestricted aisle access.

The seat itself is reasonably comfortable, upholstered in plush brown leather and despite looking quite dated, still holds it’s own against rival business class products.

The rest of the seat shows it’s age with slightly cheap-feeling plastics, composite video ports (for what purpose – I’m unsure!) and a slow and jerky IFE system. There is also no Wi-Fi or phone connectivity. This is coming on the 787-10.

Also, there is no space to put your carry-on bag under the seat (a feature that is increasingly being incorporated in many business class seats for added convenience). Baggage must, therefore, be stowed in the overhead locker.

However, there are some nice storage cubbies that are good for phones, laptops, iPads and toiletries. 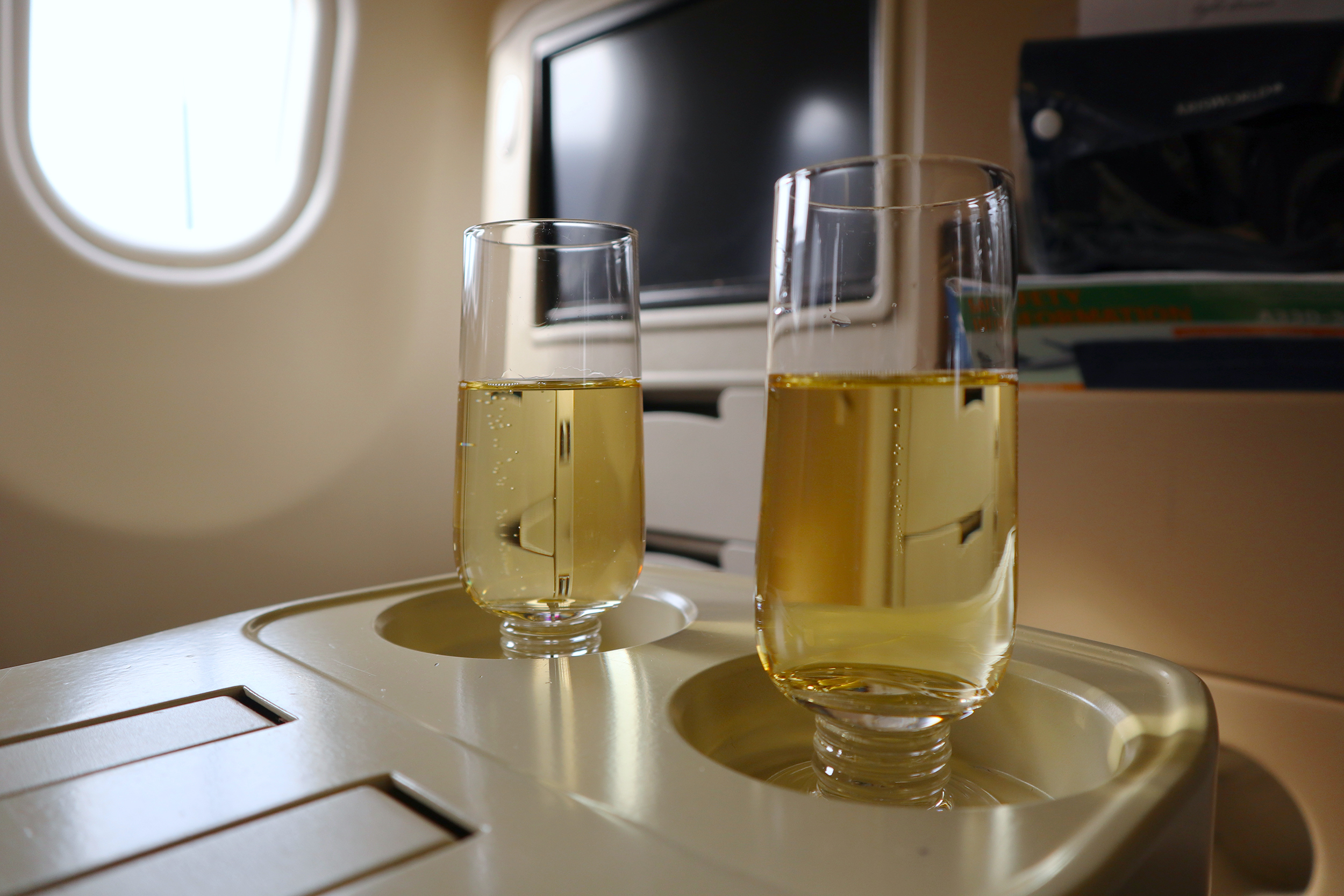 Once settled in we were offered a welcome drink with a choice of water, juice or champagne (Singapore Airlines invariably now offer Charles Heidsieck champagne in their business class cabins). Other soft drinks and hot beverages are available, even at this stage, on request.

In common with all Singapore Airlines flights, there is no amenity kit offered in business clas