Skip to content
SIA blocks a number of seats on many of its flights for advance selection by most passengers, to allow PPS Club members to have first preference over the popular choices. Which are they and when can you get your hands on them?

Row 11. As the very front of Business Class, it’s one of the most popular choices among Singapore Airlines passengers. Securing it for your upcoming flight on many routes is a contentious issue however, since it’s often blocked for advance selection to all but the airline’s highest frequent flyer status holders.

SIA’s has an aircraft specific ‘rule set’ for regularly blocked seats, with some rules even applying on a route specific basis. Here we debunk the myths and lay bare the policy, so you know not only what you can and can’t pick, but perhaps most importantly when those prized seats are released to the masses.

That’s really good news, and frankly it was probably about time. The airline clearly recognised the likelihood of infants travelling in these cabins was small, and withholding them from advance selection was an inconvenience to premium cabin customers.

For example in First Class on the 777-300ER, with only four seats in the cabin, the bassinet position at 1A was previously unavailable for advance selection online. Even before a single passenger booked, the seat map looked like this:

You could always be allocated seat 1A if you wanted it (for example if 1F was already taken and you didn’t want to sit in the middle pair), but you had to call Singapore Airlines to do it.

Thankfully now there’s no need, on a 777-300ER flight with no bookings in First Class this is your seat choice:

This was even more of an issue on the A380s. The bassinet preselection rules in the two Suites configurations meant that as a couple you either couldn’t pick one of the two double bed options on the older 2007 Suites (2C / 2D) online: 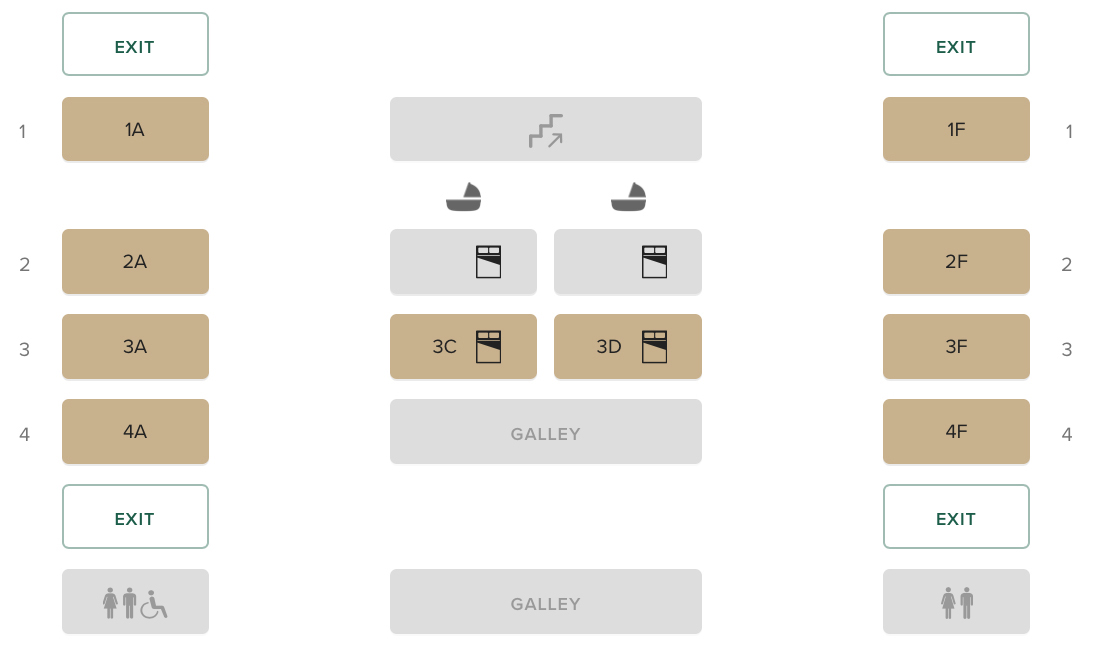 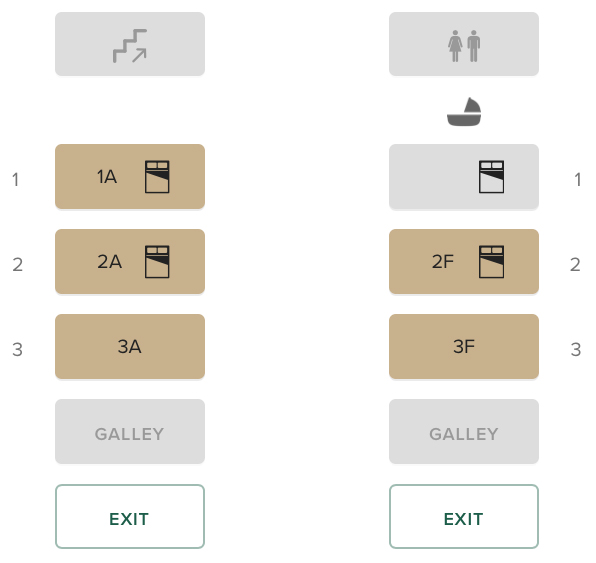 Neither of these scenarios was ideal for Suites passengers if one of the other double beds was already being obstructed, either by another couple or a single passenger.

Thankfully it’s now been resolved. No need to pick up the phone to sit in 2C / 2D on the A380s with the older Suites fit: 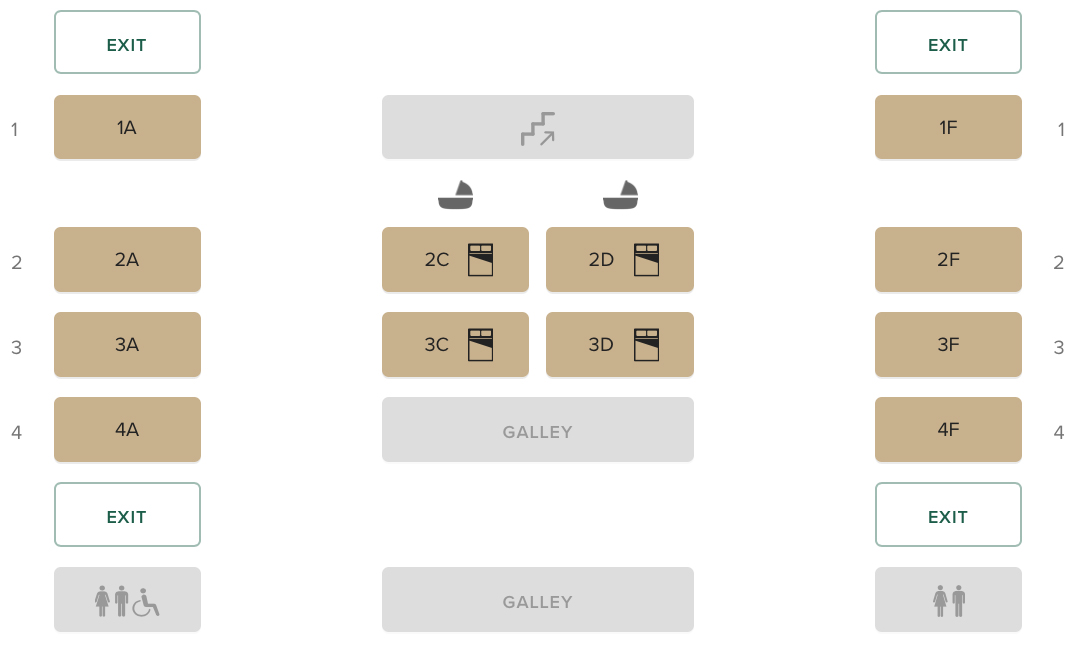 And no need to call for the right side double bed on the new A380 Version 3: 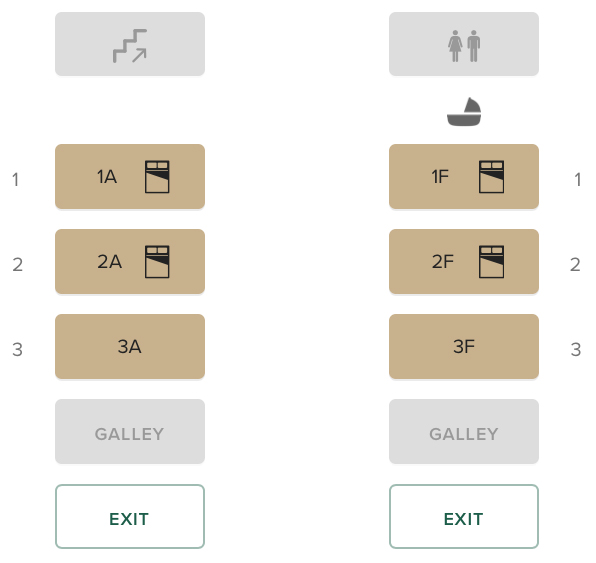 These are genuinely very sensible and good improvements. Blocking up to 25% of available seats for the slim chance of a passenger with an infant travelling was illogical, plus it no doubt occupied a large amount of time for the customer service officers on the phone, who would allocate you the bassinet seat anyway if you wanted it.

What it means is that there are no longer any seats regularly blocked in any First Class or Suites cabin on any Singapore Airlines flight.

PPS Club members get no special advance seat selection benefits in First Class or Suites, so whether you pay cash or redeem miles for these flights you now have full access to the available seat inventory in this cabin.

On a number of aircraft and routes Singapore Airlines continues to block specific Business Class seats for advance selection to all passengers except PPS Club members.

If you are a PPS Club member, provided your membership number is included in your booking, these seats will be available for you to select both for you and your travelling companions on the same booking.

Not all of these preferred seats will be selected by PPS Club members travelling on every flight, so your best chance to secure any unassigned ones is when they get released for general selection.

This is a vital difference you need to be aware of. Many people assume you must wait until online check-in opens (STD -48 hours) to secure one of these premium seats. On many routes that’s not the case.

With bassinet positions in Business Class no longer blocked for advance selection, seats in this cabin are now only blocked for:

Here’s how it works by aircraft type and flight length.

The Airbus A330-300 has no blocked seats in Business Class on any route.

The standard 3-class Airbus A350-900s always have row 11 blocked in Business Class for PPS Club members, whether it’s a short flight to Hong Kong, or a long-haul stretch to San Francisco or Milan.

The exception is the shortest two flights on the network – Jakarta and Kuala Lumpur. On those routes there are no seat blocks in force in this cabin.

Row 11 is a good option, but remember row 19 in the smaller Business Class cabin also shares the same extra legroom. It is not blocked for advance selection.

If row 11 is your preference, you’ll want to get online 96 hours (4 days) before your flight to try and secure it, with the exception of Europe / USA flights where you’ll have to chance your luck at online check in 48 hours before.

Flights between Manchester and Houston follow the 96-hour rule for all passengers being able to select unoccupied seats in row 11.

Additionally on longer flights of 9 hours scheduled flight duration or more, where 3 pilots are needed, seat 18D is blocked for crew rest on the A350. That includes the MAN-IAH-MAN flights.

The only seats blocked on A350 ULR flights in Business Class are 10A, which is always used as a crew rest seat and cannot be selected, and additionally on Newark and Los Angeles flights seat 17D, due to the requirement for 4 pilots.

San Francisco flights only need 3 pilots, so seat 17D is not blocked on this route (in any case, the ULR variant will stop flying to San Francisco from October 2020).

The A350 Regional is the only regional aircraft in the fleet with any seat blocks in force in Business Class. In this case it’s row 11, reserved for advance selection by PPS Club members until 96 hours before departure time.

This is the case on all routes flown by this aircraft, including the short Jakarta and Kuala Lumpur flights.

Row 19, the bulkhead row in the smaller Business Class cabin on these aircraft, is not restricted.

Singapore Airlines is blocking the forward two rows on A380 Version 1 and 2 aircraft in Business Class (rows 11 and 12) for advance selection, keeping them aside for PPS Club members only. These seats are popular and in the quieter mini-cabin at the front of the upper deck, with row 12 being the first to feature any windows.

Seat 16D is blocked for crew rest on longer flights where 3 pilots are required. Note that this does not apply to FRA-JFK or JFK-FRA flights.

Singapore Airlines blocks the three bulkhead rows on A380 Version 3 aircraft, rows 11, 91 and 96, so that PPS Club members get first choice over the additional foot space and middle ‘double bed’ positions.

These are released for general selection at the usual 96 hour or 48 hour windows prior to departure.

Seat 23F in Business Class is blocked as a crew rest position on longer flights like London and Zurich.

The Boeing 777-200 has no blocked seats in Business Class on any route.

Row 11 is blocked for advance selection on all 777-200ER flights to all except PPS Club members, up to 4 days before departure.

Seat 18F was previously blocked for crew rest on the Singapore – Istanbul route, however the 777-200ER no longer operates any long flights like this (the route shifted to the A350), so this no longer applies.

The Boeing 777-300 has no blocked seats in Business Class on any route.

Row 11 is blocked on 777-300ER aircraft in Business Class for selection only by PPS Club members until the usual 96 hour / 48 hour cutoffs.

Note that another bulkhead option with additional legroom is available on these aircraft at row 15, which is not blocked.