Skip to content
Our guide to the new paid seat selection options on Singapore Airlines and SilkAir flights.

Back in December, Singapore Airlines and SilkAir announced a range of new fare categories, harmonising their economy and business class airfare pricing structures, and introducing new booking classes, each with different perks attached.

Those changes came into effect yesterday, so if you were looking to enjoy the perks of the previous ticket types, sorry to say but it’s too late to book now.

One of the major, and more controversial changes announced was that many passengers, mostly those booking the cheapest ‘Economy Lite’ fares, would now have to pay a fee to select their seat in advance on Singapore Airlines and SilkAir flights.

Depending on the ticket type purchased, and your KrisFlyer status, fees could apply for ‘Standard’ seats, ‘Forward Zone’ seats or ‘Extra Legroom’ seats.

Although extra legroom seats in economy class were already chargeable to most, and therefore well defined, neither airline revealed exactly which seats would be classified as ‘Forward Zone’ and ‘Standard’, nor what the exact seat selection costs would be by route, until today.

Advance seat selection fees will predominantly affect those booking the cheapest economy class fares (‘Economy Lite’), though Forward Zone seats will still be charged for ‘Economy Standard’ fares, and the charge to sit in an ‘Extra Legroom’ seat applies to all economy fares.

In premium economy, all passengers will have to pay for an ‘Extra Legroom’ seat. KrisFlyer and PPS Club members will have some of the fees waived based on their status level. Remember, at 48 hours prior to departure, seat selection becomes complimentary for all passengers. 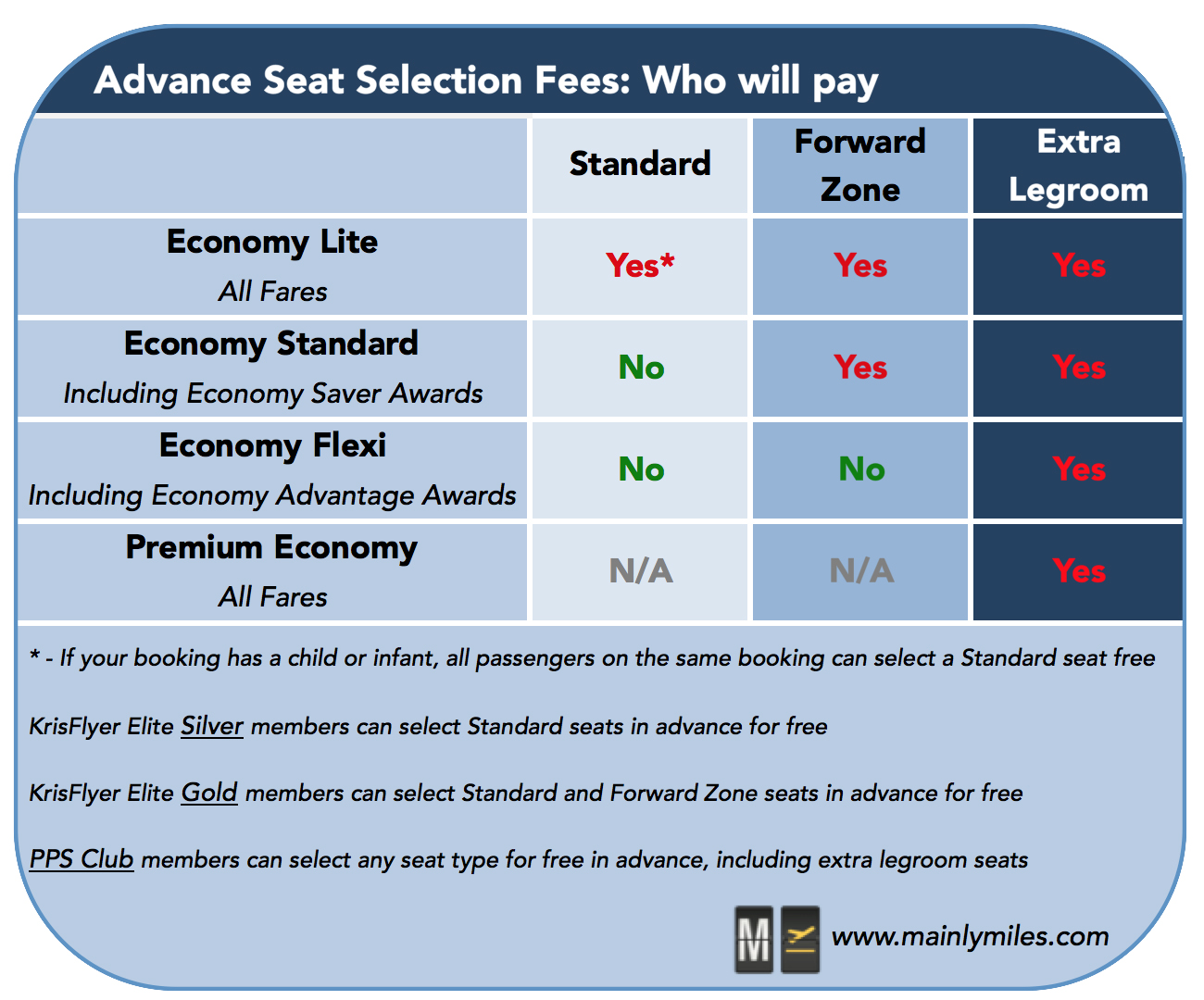 If your booking is affected by the new seat selection fees, these are the charges you’ll have to pay to assign your seat more than 48 hours in advance of your flight departure. The fee is per passenger, per flight segment. Once check-in for your flight is open (at STD minus 48h), or if you book your flight less than 48 hours before departure, seat choice is complimentary for all passengers. 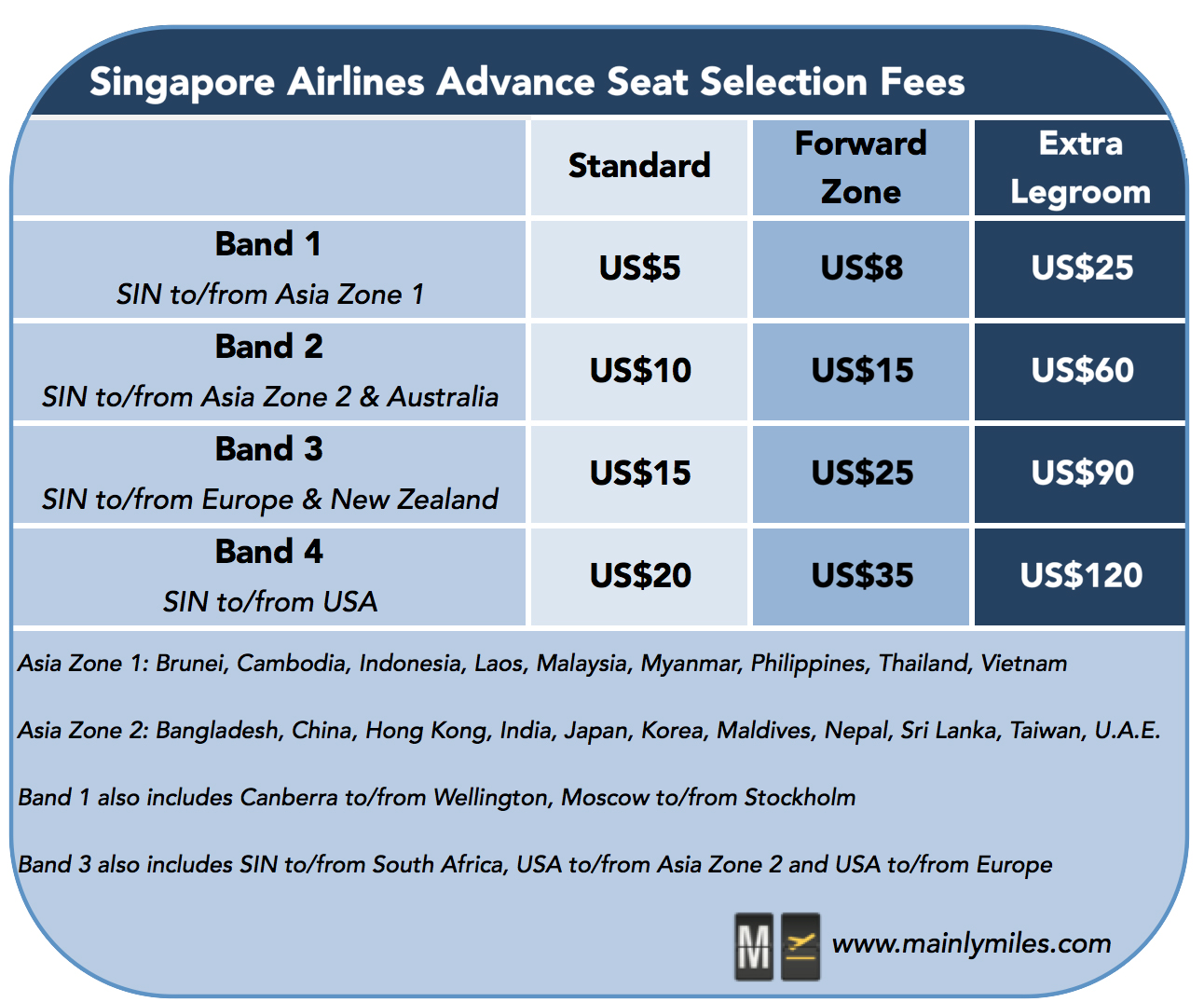 Once you progress to the seat selection page, it will reflect the actual cost in your local currency for each sector of the flight, as shown here:

The full terms and conditions for paid advance seat selection can be found on the Singapore Airlines website – see here.

The seat maps in our SIA Fleet section will be updated in due course to reflect the new defined zones, with our tips on the best seats to choose in each zone, for each aircraft configuration in the fleet.

In the meantime here’s how Singapore Airlines and SilkAir have designated Extra Legroom Seats, Forward Zone Seats and Standard Seats in economy class by aircraft type (Extra Legroom Seats in premium economy are self-explanatory, but will feature in the dedicated fleet guide once updated).

Singapore Airlines are obviously seeking to generate easy revenue with paid advance seat selection, and no doubt many passengers will play along to remove the anxiety of being separated from travelling companions or being stuck in that dreaded middle seat.

It’s a strategy that already works well for some other ‘full-service’ carriers, like British Airways, Emirates and Qantas, so it’s unlikely to go away. Remember the golden rule – if paid seat selection affects your booking you don’t have to take the plunge and pay up as soon as you book.

Keep an eye on the seat map to get an idea of what seats are likely to still be available when online check-in opens 48 hours before departure time (e.g. if you’re travelling alone and all you care about is an aisle seat, you’re likely to be ok holding off).

Remember if you’re travelling as a family with infants or children, or you’re KrisFlyer Elite Silver or above, you’ll always be entitled to ‘Standard’ seat selection regardless of the fare you paid.

ExpertFlyer also works well here, its searchable seat maps for specific flights can sometimes help you determine whether the bassinet rows, for example, are actually occupied or not (the SIA seat map will show them occupied and unavailable for selection until 48 hours before departure, regardless).

Bottom line if you choose not to pay for advance seat selection – complete online check-in exactly 48 hours before departure if you can, as it’ll likely be the best choice of what remains. You may even be pleasantly surprised.