Skip to content
Singapore Airlines has slashed its Wi-Fi pricing by up to 60%. Connect from as little as US$3.99. 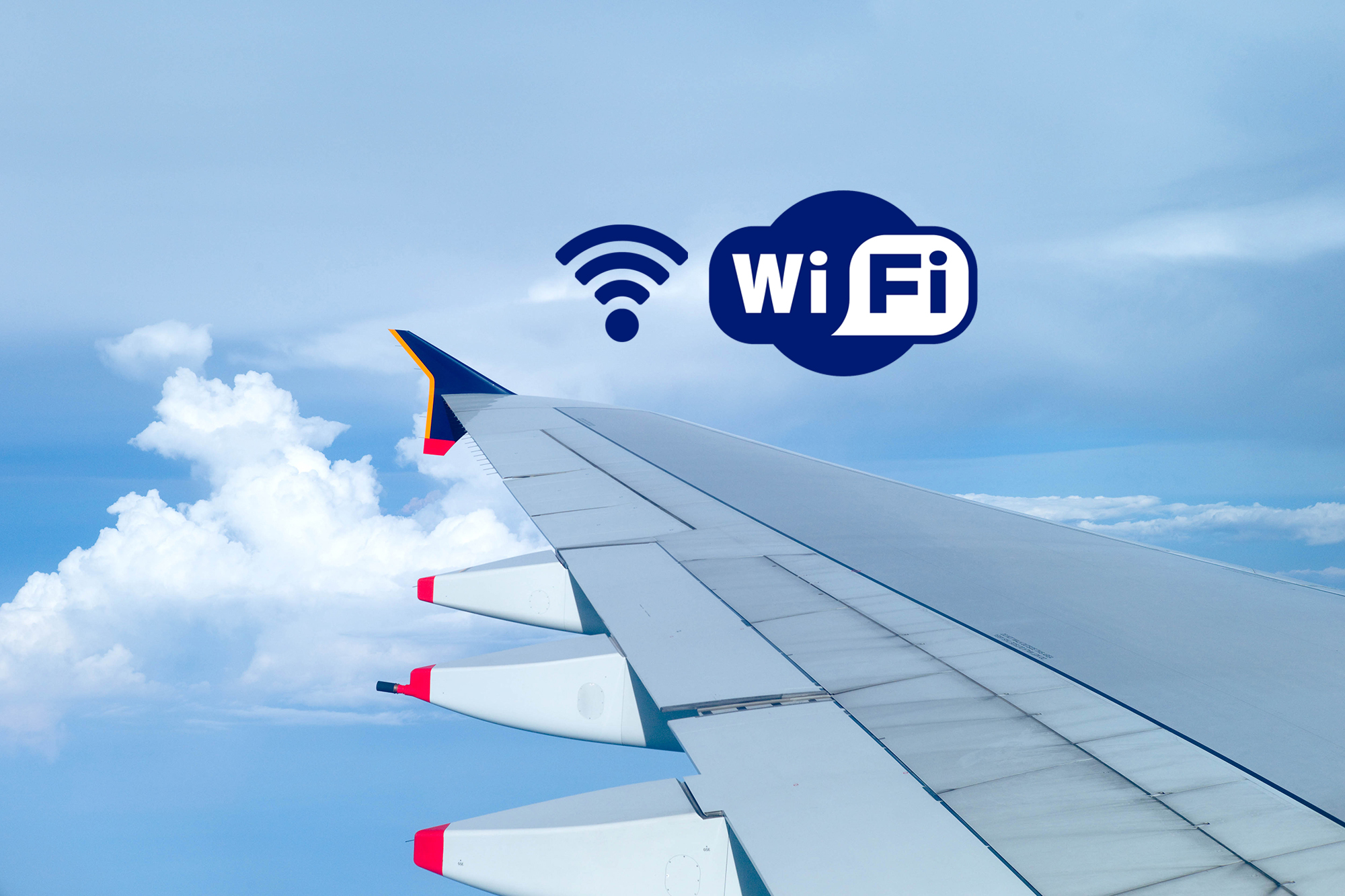 Last week we reported how Singapore Airlines had introduced free unlimited Wi-Fi on most equipped aircraft for First Class and Suites passengers, while also increasing the complimentary allowance for those flying Business Class, and PPS Club members in Economy or Premium Economy, from 30MB to 100MB on these newer planes.

At the same time the airline has also changed the pricing structure for its on board Wi-Fi plans, largely harmonising them across the fleet and significantly reducing the cost compared with the previous plans.

If you’re flying on a Wi-Fi equipped aircraft, the following complimentary access packages are available.

Singapore Airlines has confirmed that the complimentary allowance for First Class / Suites passengers and enhanced 100MB allowance for Business Class / PPS Club members is only on aircraft with the newer inflight connectivity systems. Older aircraft will undergo retrofit in due course, as shown below.

The cabin class allowance is irrespective of whether you made a redemption, cash booking, or upgraded from another class.

In other words if you find yourself sitting in Suites or First Class on one of the newer A380s or 777-300ERs, even if you are lucky enough to be upgraded at the gate, you’ll get unlimited Wi-Fi during your flight.

Passengers upgraded to Business Class will similarly be entitled to the 100MB free access allowance on the newer planes even if their original ticket was in Economy or Premium Economy class.

Complimentary data allowances apply per sector, so if you’re flying for example from Los Angeles to Singapore via Tokyo Narita in Business Class on an aircraft with the newer Wi-Fi system, you’ll get 100MB on the first flight then a fresh 100MB for the second one too.

On the same routing with an older plane (since the 777-300ER comes in two ‘Wi-Fi varieties’), it’ll be 30MB for the first flight then another 30MB for the second one.

Prices have been largely harmonised across the fleet. This is the new Wi-Fi pricing schedule for each Singapore Airlines aircraft type, as of August 2019:

For some reason there are only two purchase options on the A350 Regional aircraft.

Note that the older A380 Version 1 & Version 2 aircraft (9V-SKA to -SWR & -SWT) previously had different Wi-Fi options available. These aircraft still have the older (and slower) SITA system, but the pricing has been harmonised with the newer aircraft.

Only the complimentary allowances are affected for A380 aircraft with the older system (see tables above).

Note that the older 777-300ER aircraft (9V-SWA to -SWT) previously had different Wi-Fi options available. These aircraft still have the older (and slower) SITA system, but the pricing has been harmonised with the newer aircraft.

Here’s an example of how the in-flight Wi-Fi access options look on the older aircraft:

This matches the pricing options that Mark at The Shutterwhale had on the same route a few days before, on a newer aircraft (9V-SNA).

That means no more guessing which data package pricing will be available when you fly on the 777-300ER in future. Only the complimentary allowances are affected for 777-300ER aircraft with the older system (see tables above).

These pricing schedules are now confirmed by Singapore Airlines, so if you see an inconsistency with any of the above pricing when on board, please let us know and we’ll seek clarification and update.

If you want to know what aircraft type you’ll be flying on, check out our continually updated Business Class Seats by Route page. Since Business Class is fitted to all aircraft types in the fleet, you’ll find every route and flight number on the network there.

What are the savings?

These new price plans are a significant improvement on the rather expensive options previously available.

The smallest data bundles, which Singapore Airlines now calls the “Chat” package optimised for text messaging apps like WhatsApp and iMessage, previously cost US$8.00 on the 787-10 (30MB), and are now mostly priced at US$3.99, 50% less, for a similar allowance. 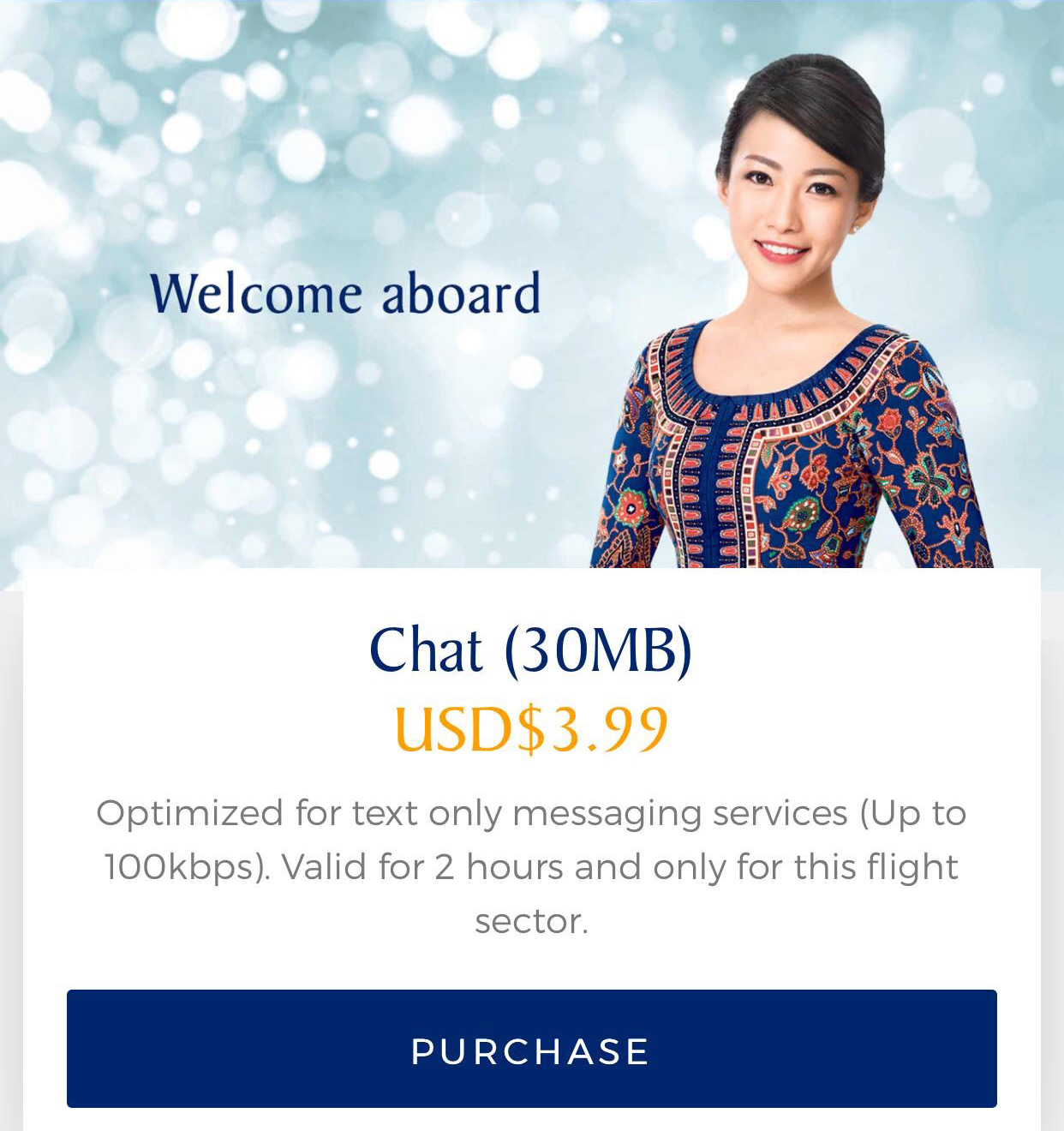 It’s not possible to definitively say what speed you will get when browsing the web on board a Singapore Airlines Wi-Fi equipped aircraft. Numerous factors such as atmospheric conditions, altitude, location, passenger usage or even what device you use will affect the end-user experience.

The limitations for each system are based on the satellite bandwidth they respectively use. For SITA On-Air it’s KA band and 864 kbit/s (per channel). For Panasonic, it’s KU band and 12 mbps (although it can go much higher).

These should be more than enough to satisfy your airborne data needs.

The older A380s fitted with SITA’s OnAir system are notoriously slow and unreliable – but it is worth remembering that this technology is nearly 11 years old (since fitment) and back then onboard Wi-Fi hardware was very much in its infancy.

You only have to look at the difference in the size of the satellite antenna on SIA’s new and refitted A380s compared with the old ones to tell how much has changed about the technology in the last decade.

A common complaint for in-flight internet is that it works flawlessly for a while, then suddenly stops working for maybe 10 (frustrating) minutes before finally re-connecting. Remember, this is not like the internet in your home or office.

This process can take several minutes. Our advice: be patient, order another glass of Champagne and remember where you are!

Currently, the three major telcos in Singapore are offering unlimited data packages for use with the Singapore Airlines onboard Wi-Fi. If you’re flying on an equipped aircraft, available options are as follows:

These look expensive options (and they are), but remember as the onboard Wi-Fi options are generally not unlimited, and are priced in US$ (so you need to multiply by at least 1.4x), they start to look like more reasonable alternatives.

Some Boingo packages, such as those you get with the Citi Prestige card, also allow access on selected Singapore Airlines aircraft. This does tend to vary however and it isn’t totally reliable.

Singapore Airlines Wi-Fi pricing has always been on the steep side, but these latest reductions bring the costs to much more sensible levels on all equipped aircraft types, with basic packages starting at US$3.99.

Remember the free data allowances for Business Class and PPS Club holders has also been significantly improved from 30MB to a much more useful 100MB on newer aircraft, and First Class and Suites passengers now get an unlimited data plan when flying on these planes.

If you still find yourself flying on an older 777-300ER or A380 the previous complimentary data caps still apply, though these aircraft are being progressively refitted with the newer system.