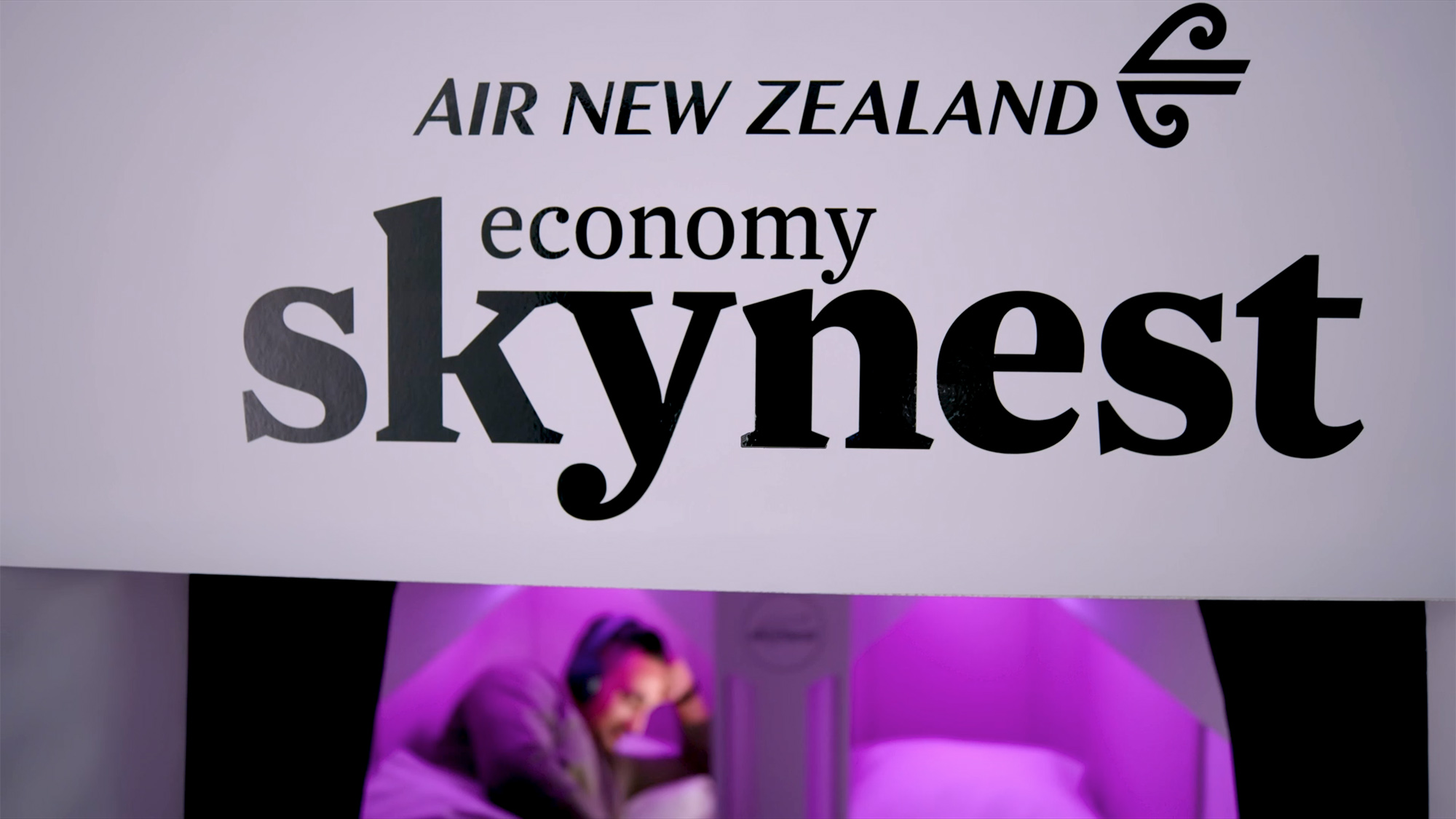 Economy Class seats and long-haul (or even ‘ultra-long-haul’) flights are two things that, for most of us at least, simply don’t go well together. Especially on overnight sectors, the biggest issue with seats like this is the inability to lie flat for some essential en-route shut-eye. Let’s face it – most of us can’t sleep well when sitting upright.

Star Alliance carrier Air New Zealand thinks it has found a solution for Economy Class passengers willing to part with some extra cash – though not a full Business Class fare – the Economy Skynest.

The concept, revealed last week, is the result of three years’ work including the input of over 200 of the airline’s customers.

“A clear pain point for economy travellers on long-haul flights is the inability to stretch out. The development of the Economy Skynest is a direct response to that challenge.” Mike Tod, Air New Zealand Chief Marketing and Customer Officer

Six bunk-bed style sleeping pods, each measuring at least 200cm (79″) long and 58cm (23″) wide, with three on either side of a central access area.

It is intended that each pod will include a full-size pillow, sheets, blanket and ear plugs along with privacy curtains and lighting designed for sleep. The airline is also exploring other features, such as a separate reading light, USB charging sockets and a ventilation outlet.

Where will it be?

The exact positioning of the Economy Skynest within the aircraft has still to be confirmed. If installed however, Air New Zealand has stated it will be in the economy cabin, rather than an underfloor or overhead location, where crew rest compartments are typically located.

The airline’s promotional video illustrates the location of the facility at the back of a passenger seating section, though with an open fronted design it would presumably have to be in a position away from the light and noise pollution of a galley area.

How will it work?

The Skynest is not a space you’ll be able to occupy for takeoff and landing (regulatory requirements would not allow that), and in describing it as “a comfortable cocoon away from your seat” Air New Zealand is clearly identifying this as an additional perk for those who choose it.

“An economy-class customer on long-haul flights would be able to book the Economy Skynest in addition to their Economy seat, get some quality rest and arrive at their destination ready to go.” Nikki Goodman, Air New Zealand General Manager of Customer Experience

In other words your usual seat in the cabin will still be available, and you’ll need to occupy it for takeoff and landing.

The Skynest pod would therefore be available to book in addition to your economy seat, presumably including the option for it to be ‘up-sold’ on board to weary passengers, subject to availability on the day.

Air New Zealand has stated that they are still working on “an ideal session length through customer testing”.

That suggests the airline doesn’t intend for each bunk in the Skynest to be available to a single passenger throughout the flight. It appears that an advance booked arrangement for specific time blocks will be offered.

Think ‘hot bedding’ in capsule hotels, like the Yotel concept.

The booking time ‘blocks’ for using the facility would probably have to be harmonised to avoid disturbance, as it would be no use in having the option to sleep for say 4 hours, but then suffer the noise of a number of other pods ‘changing over’ during your rest period.

Air New Zealand’s Boeing 787-9s will fly for 17 hours 40 minutes from New York to Auckland from later this year, so we can see the airline potentially offering the following 3.5-hour nap ‘blocks’ after takeoff on such a flight:

Such a setup, which is a complete guess on our part by the way, would allow the airline to sell up to 24 nap sessions in total on a flight of this length (four per bunk installed), a far more financially attractive proposition than being able to sell only six Skynests, each for the exclusive use of a single passenger per flight.

If you’re travelling as a couple, the Skynest gives rise to an interesting benefit. Say your partner books 4 hours in the Skynest during the middle of the flight, but you don’t. You now have two Economy Class seats to stretch out in for that period. You could even make two separate Skynest bookings one after the other, so you both get some flat-bed time plus the same amount of time with two seats to yourself.

Is it a good idea?

There’s a balance for Air New Zealand to strike here, depending on whether it goes ahead with the concept.

One concern is to not to make the option so cheap that it’s rarely available other than to early bookers, but more crucially even at higher rates that it does not dilute bookings in premium cabins.

For example if the ticket cost including the additional charge for a Skynest add-on comes out close to or the same as a Premium Economy ticket, that would almost certainly reduce demand in that cabin.

Similarly we can’t see pyjamas or amenity kits being thrown in as part of the package, for example, since this would further de-incentivise customers to shell out for Premium Economy or Business Class.

When will it happen?

Trademark and patent applications for the Economy Skynest have been filed by the airline, which has been known for bringing innovative products to its cabins. Despite that, even Air New Zealand itself is not underestimating the challenges ahead in getting the innovative facility approved and installed on an aircraft.

“The Engineering, certification, technical and operational requirements from the regulators [are] extremely challenging to overcome, and we’re still working to resolve those.” Kerry Reeves, Air New Zealand Head of Aircraft Programmes

One thing that sprung to mind when we first saw the concept is whether the cabin floor strength limitation is sufficient to permit potentially upwards of 600kg weight across such a small surface area, in addition to the weight of the compartment itself.

The airline has said it will wait to see how non-stop Auckland to New York flights using Boeing 787-9 aircraft pan out over the first year of operations before making a decision on implementing the Economy Skynest concept, suggesting it is earmarked for that route initially. Services on the non-stop route start in October 2020.

Not all Air New Zealand concepts last of course, even those that make it to the aircraft. The airline’s popular Premium Economy Spaceseat, installed on seven of the airline’s 777-300ERs in a 2-2-2 layout with enhanced privacy and a ‘Business Class’ look, only lasted around seven years.

44 of the space-inefficient seats (inefficient for the airline that is) were replaced on those aircraft with 54 of its more generic Premium Economy seats with a 2-4-2 configuration in 2016.

In its press release this week, Air New Zealand has also stated that it expects other airlines will want to license the Economy Skynest from them, in the same way China Airlines has done with ANZ’s trademarked Economy Skycouch design.

Fun fact: Air New Zealand may offer its Economy Skycouch under licence to China Airlines, but it’s no stranger to paying other airlines for use of their cabin designs either. All 830 Business Class seats on Air New Zealand’s fleet of Boeing 777 and 787 aircraft are installed under licence to Virgin Atlantic, who own the design of the product.

One of the biggest gripes about flying in Economy may have a solution, at least for passengers willing to pay extra, with Air New Zealand’s Economy Skynest concept.

This isn’t going to be available anytime soon, with regulatory hurdles to clear even if the airline decides to go ahead and install the product on its long-haul aircraft flying the non-stop Auckland to New York route.

It’s certainly an interesting concept and would potentially give Air New Zealand the edge over SIA on the Singapore – Auckland route in Economy Class, if it were to be installed on all the airline’s long-haul Boeing 787s.

Would you pay extra on top of your Economy Class ticket price for a few hours’ rest in a flat-bed on a long-haul flight? Let us know in the comments section below.