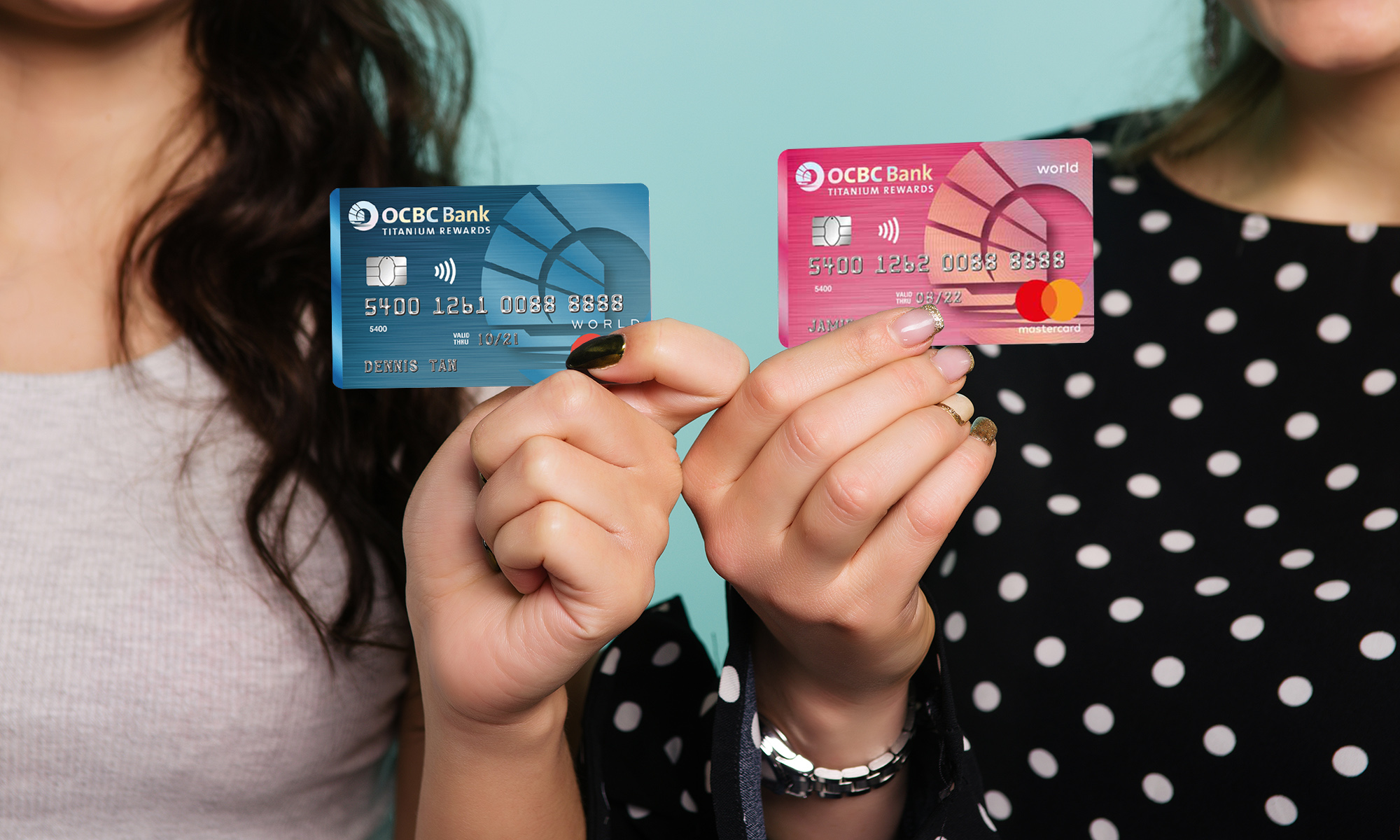 Here’s our review of the OCBC Titanium Rewards credit card issued in Singapore. It forms part of our series of credit card reviews, which are all summarised on our dedicated Credit Cards page.

Dollar amounts refer to SGD, and ‘miles’ refer to KrisFlyer miles, except where stated. This review was updated on 1st May 2020.

The annual fee for the OCBC Titanium Rewards card is $192.60, however it’s waived for the first two years of card membership.

Thereafter (in year three onwards), provided you charge at least $10,000 to the card within your subsequent membership years (i.e. each 12-month period from your card issue anniversary date), the annual fee continues to be waived.

There is no current sign-up bonus for this card.

The last sign-up bonus was in March / April 2019, worth 12,800 miles if you activated the card and spent just $300 in the first month. Sadly that has not been repeated this year, as it was one of the easiest sign-up bonuses to achieve for a fee-free card.

Clearly the basic earn rate is very poor and to be avoided, with a range of entry-level cards in Singapore offering 1 to 1.5 miles per dollar for general local spending and at least 2 miles per dollar expected for overseas spend.

The true key to this card is the 10X reward points spending categories, which will get you 4 miles per $1 spent, and that’s fantastic – especially locally.

Here’s the full list of Merchant Category Codes (MCCs) which do qualify for 4 miles (10 OCBC$) per $1 spent both locally and overseas, including online transactions:

All transactions at the following merchants are confirmed by OCBC to qualify for the 4 mpd (10 OCBC$) earn rate:

The MCC of a particular merchant is not decided by the banks, but by the card networks (Mastercard in this case). There is also currently no publicly available database in Singapore showing which merchant processes transactions under which MCC.

This excellent crowdsourced spreadsheet by HWZ forum users lists a host of retailers where the enhanced 4 mpd rate has been achieved using the OCBC Titanium Rewards card (click the OCBC tab on the spreadsheet to see them). These include:

Do be careful however, as merchants can have more than one MCC (for example, they might process your payment under a valid MCC for 4 mpd earning on one occasion, then under an invalid one the next time). The MCC of a merchant can also change.

For that reason before you make a large transaction at one of the retailers not specifically listed by OCBC, we recommend making a small ‘test purchase’ first.

Pro Tip: You can call OCBC (or send a secure message via online banking) as soon as any purchase is posted to your account to check which MCC it will be processed under (and therefore whether it will be eligible for the 4 mpd rate); there is no need to wait until the end of the following month to find out.

The fact that the spending cap on this card is annual, rather than monthly, is a nice benefit compared to the Citi Rewards card for example, which imposes a $1,000 monthly cap.

That makes the OCBC Titanium Rewards card better for purchasing big-ticket items like furniture and electronic goods, which can easily exceed a monthly limit.

Your annual ‘cap counter’ will reset at the start of the equivalent month of account opening each year.

If you continue to make transactions at 4 mpd (10 OCBC$) merchants after reaching your annual cap but before the start of your next membership year, you will earn at the basic 0.4 mpd (1 OCBC$) rate.

When do the bonus points credit?

You are initially awarded 0.4 miles (1 OCBC$) per $1 on all spending with this card when it is first posted to your account.

The additional 3.6 miles (9 OCBC$) are credited, provided the spending category was eligible for the transaction, by the end of the following month.

As with most credit cards, there are spend categories which won’t earn you any OCBC$ with the OCBC Titanium Rewards card. That means not even 0.4 miles per dollar, the basic earn rate, will be awarded.

Here is the full list including relevant excluded MCC codes. It’s subject to change so do check the card terms and conditions for the latest information.

Note that you can tap and pay for bus and train rides in Singapore using your OCBC Titanium Rewards card and earn 1 OCBC$ per $1 spent (0.4 mpd). There are usually better offers for these transactions with other cards, however.

What is the transfer cost to KrisFlyer miles?

It’ll cost you $25 each time you transfer your points to KrisFlyer miles.

Is there a minimum transfer amount?

Unfortunately that’s not as competitive as the transfer blocks for OCBC’s 90°N card (1,000-mile blocks) or the Voyage card (1-mile blocks), plus those two cards also benefit from zero miles transfer fee. 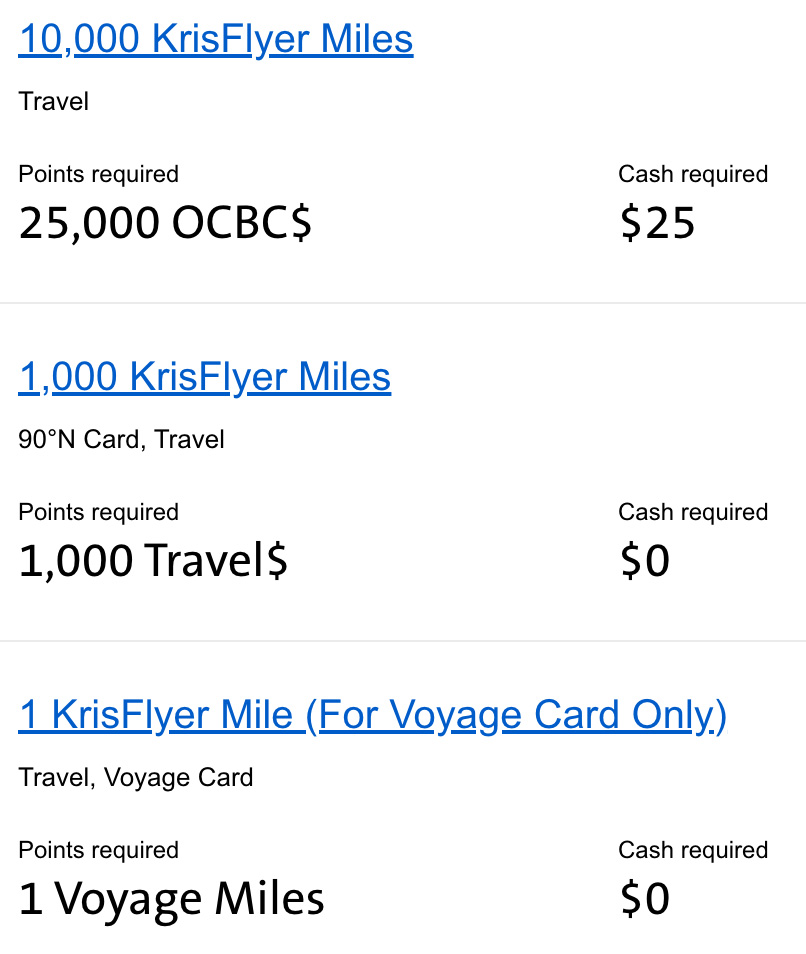 Do note that OCBC$ and both Travel$ (for the 90°N card) and Voyage Miles (for the Voyage card) are not transferable or interchangeable with one another, nor do they ‘pool’ if you hold more than one of these cards.

You’ll notice the OCBC Titanium Rewards card comes in two colours – blue and pink. These are treated as separate card accounts, and OCBC has confirmed that there is nothing stopping you applying for both cards, in which case you will get the 4 mpd earn rate on $12,000 worth of eligible spending on each card. 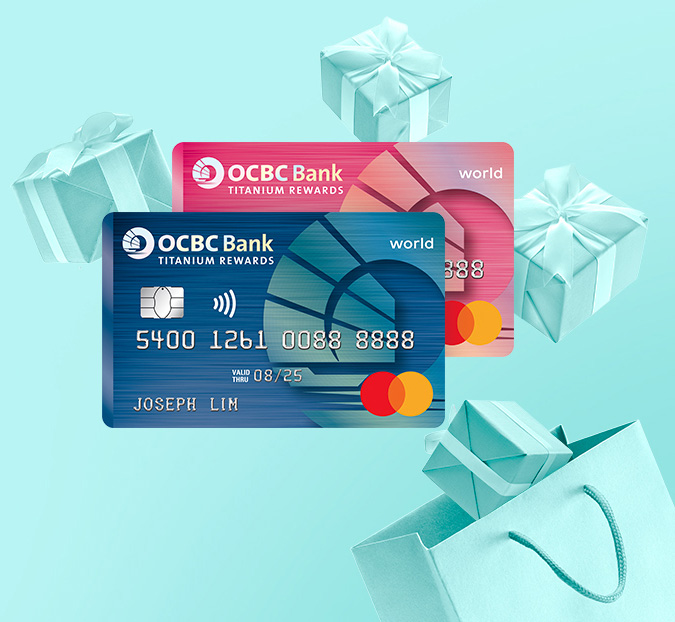 That means once you’ve reached $12,000 on the blue card, for example, apply for the pink one and you’ll get another $12,000 spending cap for that at the bonus rate.

This strategy means you can accrue 96,000 miles per year in total, provided you can (carefully) spend a total of $24,000 per annum in the designated categories across the two cards.

Yes, OCBC$ are valid for two years from the month of accrual. In other words they will expire on the last day of the month 24 months after the month in which they were earned in your rewards account.

Once transferred to KrisFlyer miles, they will then have a further three years validity.

How long do miles take to credit to KrisFlyer?

What OCBC state here and the reality are (thankfully) two different things.

This is a slight improvement on what the bank was promising in 2018, when they quoted “approximately 21 working days” as the transfer time to KrisFlyer.

The good news is that it doesn’t actually take that long. In reality transfers take just 24 hours.

This was first shared with us by one of our readers in February 2018, and also confirmed on the FlyerTalk forum transfer time post in September 2018 (a 12-hour turnaround that time 11pm to 11am the next day).

I personally transferred OCBC$ accrued on the Titanium Rewards card from my rewards account in August 2019 at around 12pm on a Thursday. The miles were credited in my KrisFlyer account at 11.30am the following day (Friday).

That’s one of the quickest turnarounds out there from a credit card, and even made it onto our list of instant and quick ways to transfer miles to KrisFlyer.

Your transactions on this card will first be rounded down to the nearest whole Singapore Dollar (after conversion from the foreign currency amount if applicable), and then multiplied by the prevailing rate depending on the transaction type.

“OCBC$ shall be awarded to the Cardmember based on the amount of each Card transaction charged to the Card Account, rounded down to the nearest whole number.” OCBC

For example take three local (SGD) transactions at the basic earn rate (i.e. not in a 4 mpd category), therefore accruing 0.4 miles per dollar (1 OCBC$) per $1 spent.

That means as soon as cents are involved in your transaction, you’re not quite getting 0.4 miles per dollar. For those three purchases combined you’ll receive 325 OCBC$ (equivalent to 130 KrisFlyer miles) for $327.56 spending (0.397 miles per dollar).

Let’s say you make the same three transactions at the 4 mpd enhanced earn rate. Here’s how the points rounding will work:

Remember, the first OCBC$ (of 10 OCBC$ total awarded) will be almost immediately credited, but you’ll have to wait until the end of the following month for the other 9 OCBC$ to appear.

Since any amount in Singapore dollars will first be rounded down to the nearest dollar, $1.00 (SGD) is the minimum transaction amount to earn any reward points using the OCBC Titanium Rewards card, whether transacted in SGD or foreign currency.

One thing you won’t be wanting to do with this card is make transactions in foreign currency at the basic 0.4 mpd earn rate.

With OCBC’s 3.25% foreign currency fee, that’s equivalent to ‘buying’ miles at an obscene 8.57 cents each, way more than you can ever realistically achieve in value.

At the 4 mpd bonus rate though, which would apply for example at a department store in Sydney just as it would in Singapore, the equation means buying miles at 0.86 cents each, an excellent rate to accrue them.

Here’s how that cost per mile compares to other credit cards in Singapore offering 4 mpd for at least some form of eligible transactions in foreign currency.

Cost per mile also accounts for an additional 0.3% ‘spread’ over money changer currency rates, though this doesn’t apply to all banks and all foreign currencies, so is a worst-case scenario.

As you can see with the same 3.25% foreign transaction fee across all these cards, the OCBC Titanium Rewards card matches the others.

Which loyalty schemes can I transfer into?

OCBC is now the only major bank in Singapore not supporting transfers to any frequent flyer programmes (FFPs) other than the Singapore Airlines KrisFlyer scheme.

It is also one of only two banks (the other being Standard Chartered) not allowing transfers to Asia Miles.

You can see a full table of which credit card issuers transfer into which FFPs here. As you can see some banks permit transfers to 11 different programmes, so something to bear in mind with this card is that you’re significantly more restricted than that.

What else can OCBC$ be used for?

Nothing particularly valuable. For example S$10 off your credit card bill will cost you 3,600 OCBC$, the same number is equivalent to 1,440 KrisFlyer miles, which we would value at approximately $27 when used against future flight redemptions.

There are also a range of vouchers available at similarly unattractive rates. You can see the full list at the OCBC Rewards portal.

Conversion into KrisFlyer miles is the best value proposition for your OCBC$.

The OCBC Titanium Rewards card comes with a basic membership to LoungeKey by Mastercard Airport Experiences.

This then allows you access to over 800 worldwide airport lounges for US$27 per visit (note – no free visit allowance, this is the basic membership).

You can get 2% cashback as well as earning 4 miles per dollar on your purchases at Best Denki’s retail outlets or online store with your OCBC Titanium Rewards card.