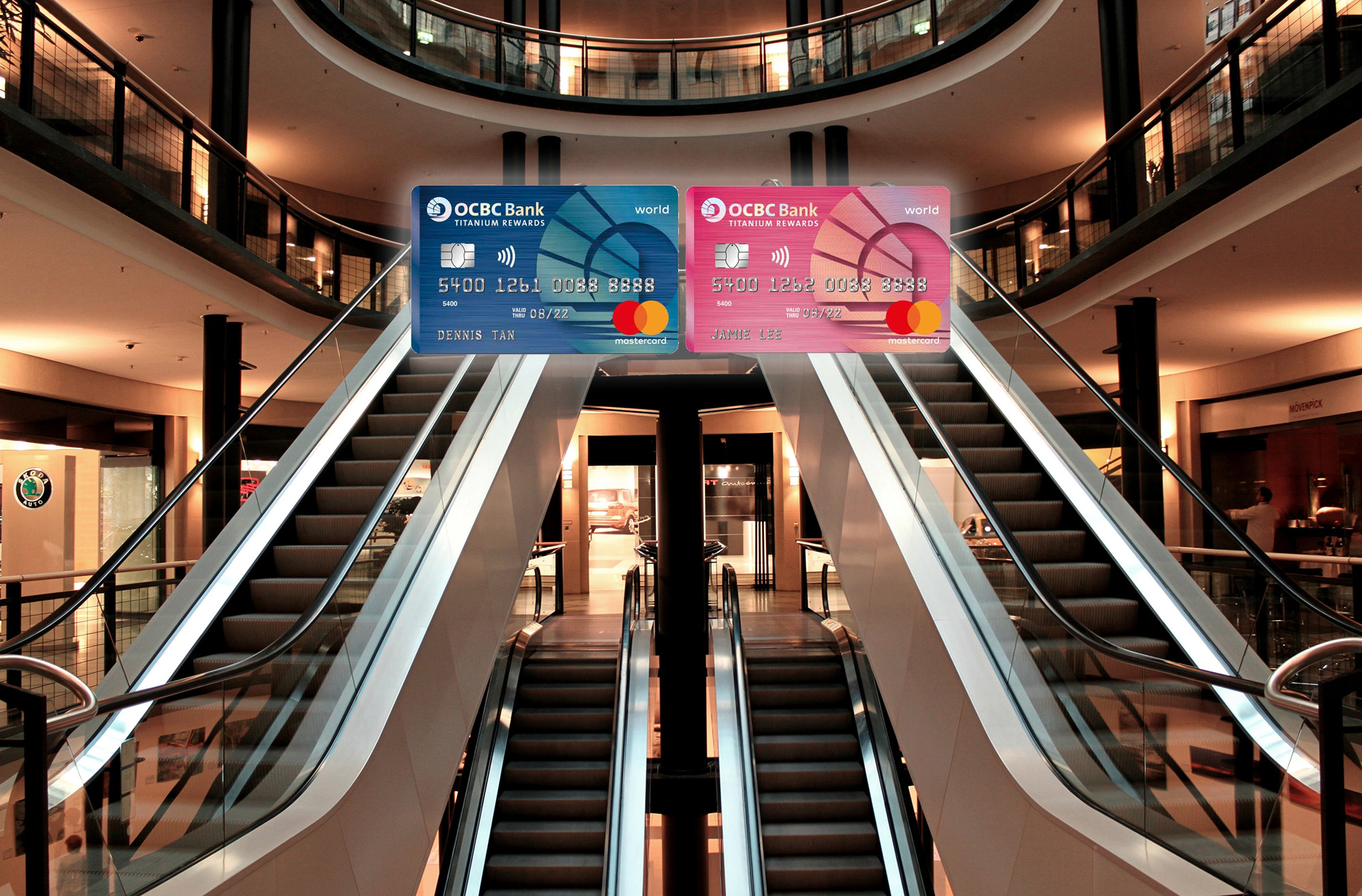 On Wednesday this week we reported about some significant changes to the OCBC Voyage card, including a change to miles earning rates, more spend required for a free airport limo transfer and new S$5 miles earning blocks, rendering some smaller transactions ineligible for miles and impacting the true earn rate on many others.

The OCBC 90°N wasn’t immune either. As we mentioned in that article it too will suffer from the new S$5 rounding policy for transactions made from 1st June 2020.

What seemed unusual was that the bank’s other primary miles-earning card, the Titanium Rewards product, appeared to have ‘dodged’ the new policy. Well alas it has not, with OCBC confirming today in a new set of terms and conditions for this 4 mpd earning option that the same S$5 earning blocks will apply from 1st June 2020. 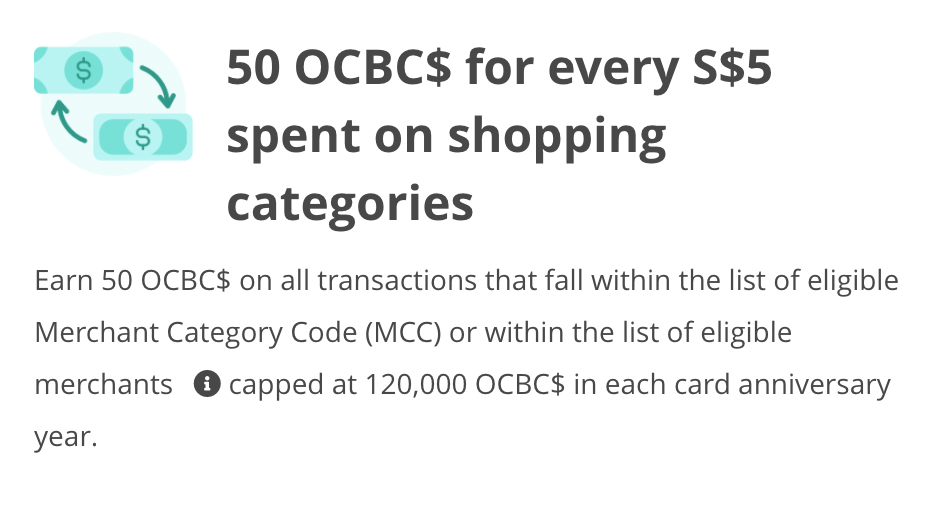 If you’re used to hearing of this as the “10x rewards” category, OCBC is now referring to it as the “50 OCBC$ for every S$5 spend” category.

How it will work

Currently the OCBC Titanium Rewards card earns OCBC$ (which convert into KrisFlyer miles at a 2.5:1 ratio) as follows:

Remember you can only transfer OCBC$ into the Singapore Airlines KrisFlyer programme (no other FFPs are supported) in blocks of 25,000 OCBC$ to 10,000 miles, with a fee of S$25 payable for each transfer (regardless of the number of blocks transferred).

Here’s a reminder of the categories for the OCBC Titanium Rewards card’s enhanced 4 miles per $1 earn rate. These will continue to earn 20 miles per S$5 spent from 1st June 2020, with no categories removed and none added either:

Here’s the full list of Merchant Category Codes (MCCs) which qualify for 4 miles per $1 spent both locally and overseas, including online transactions:

Additionally, transactions at the following retailers will accrue 4 mpd when performed in-store only (online purchases excluded).

All transactions at the following merchants are confirmed by OCBC to qualify for the 4 mpd earn rate:

OCBC are being quite upfront about this change in the new terms and conditions.

“All OCBC$ earned shall be calculated based on each block of S$5 charged to the Card per transaction, and Cardmembers shall not be entitled to any partial or pro-rated award of any OCBC$ for any amount charged that does not amount to a S$5 block. Amounts charged in multiple transactions will not be combined to make up a S$5 block.”

They even provide some worked examples, clarifying that the smallest transactions will in fact earn no miles at all from 1st June 2020.

Here’s an example of how it works today for some smaller transactions (remember the current terms and conditions still apply at the time of writing), and how it will work from 1st June 2020, assuming spend in the 4 mpd categories (which is what most of our readers will be doing with this card at all times wherever possible).

As you can see at the ‘exact’ S$5 rounding levels you’re no worse off, but stray outside those rounded totals and the earn rate can drop significantly for these smaller transactions – even to zero.

Minimum Spend Since any amount in Singapore dollars will first be rounded down to the next $5 denomination, $5.00 (SGD) will become the minimum transaction amount to earn any reward points using the OCBC Titanium Rewards card from 1st June 2020, whether transacted in SGD or foreign currency.

The impact lessens as transaction sizes increase, for example let’s look at spend levels closer to the S$100 mark.

Here we see the same impact, those transactions rounded nicely in S$5 denominations suffer no ‘loss’, but now we see that in the worst case falling one cent short has a much smaller effect – in the order of a 3% to 4% reduction in earn rate.

Once your single transactions are in the S$1,000s, the effect is negligible and not worth worrying about.

Granted that’s easier to do online than it is in a department store where you may be purchasing multiple items. For foreign currency transactions it will be almost impossible to achieve, as you’ll be at the mercy of the exchange rate and FCY fee applied, with the OCBC$ being calculated on the final SGD charge on your statement.

As with the other pair of OCBC miles earning cards, the bank is also introducing some additional categories ineligible for miles earning with the Titanium Rewards card from 1st June 2020.

The main one here is government public hospitals, though spend at private hospitals should still be eligible.

You can check the full terms and conditions for the OCBC Titanium Rewards card here:

It was more logical that the OCBC Titanium Rewards card rounding policy for miles earning would align with the bank’s other products, though we held out some early hope that it wouldn’t be affected when it was first announced that the Voyage and 90°N cards were headed this way, but this card was not mentioned.

Don’t forget nothing has changed yet. You can still use your OCBC Titanium Rewards card and benefit from the S$1 rounding policy until 31st May, with the new rules coming into effect on 1st June 2020 (a month from now).

As we’ve shown you’ll almost always lose out on miles under the new rounding policy, unless you can make transactions in exact S$5 blocks, though once your individual transactions start to exceeded the S$150 mark the effect does become increasingly negligible.

Remember the OCBC Titanium Rewards card still benefits from the ability to get two cards for a S$24,000 annual bonus cap (no monthly cap), no annual fee for the first two years and regular bonus miles promotions, so it’s certainly not one to write off even after this rather unwelcome change.

See our full review for details.

Links on Mainly Miles may pay us an affiliate commission.