Skip to content
Chope recently added KrisFlyer as a redemption partner for their Chope-Dollars, but is it a good way to redeem them?

Chope is an online restaurant booking service in Singapore allowing real-time table availability and reservation across over 1,000 restaurants in the city, both through their website and smartphone app.

You can download the iOS app for your phone here, and the Android version here. The Chope loyalty scheme allows you to earn 100 Chope-Dollars each time you make a restaurant booking, assuming of course you actually turn up.

How are KrisFlyer involved?

Back in November, Chope announced that you could now convert your Chope-Dollars, the loyalty points for the scheme, into KrisFlyer miles. 1,200 Chope-Dollars convert into 1,000 miles. 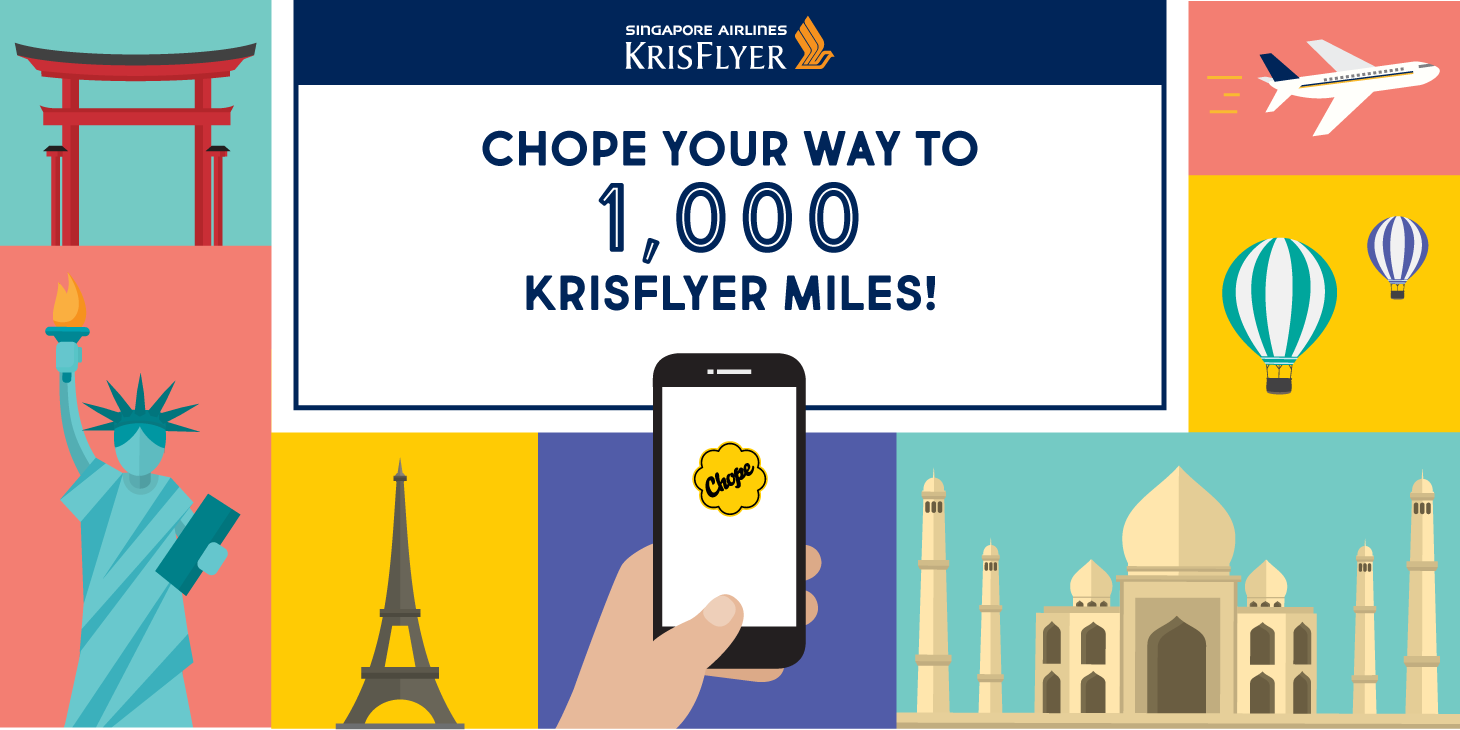 On the face of it, that seems pretty good. For every 12 restaurant reservations you make (and attend), you can be another 1,000 KrisFlyer miles richer, and closer to your next award flight. And as we know, 1,000 miles are worth about $20.

It gets better than that 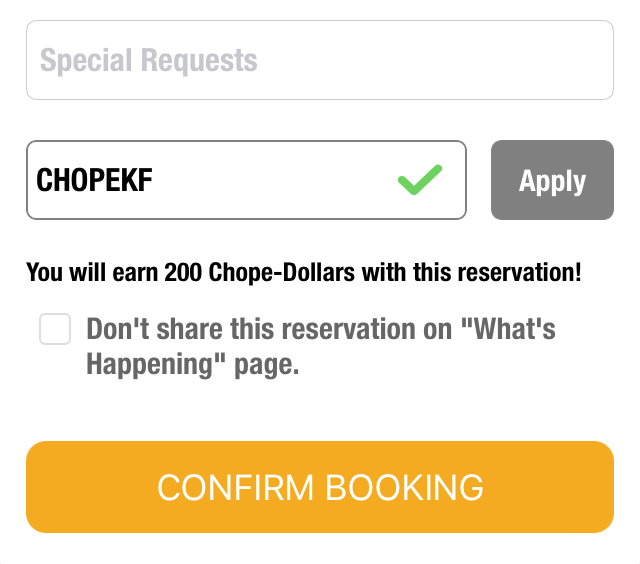 Not only can KrisFlyer members convert their Chope-Dollars into miles, they can earn double for each reservation, simply by adding the code CHOPEKF in the ‘Promotion code’ field when making a booking.

This can be applied either on the smartphone app, or through the Chope website.

That means you’ll actually accrue 1,000 KrisFlyer miles for every six restaurant reservations, which seems like a great deal.

You can ‘double-dip’ with Mileslife too 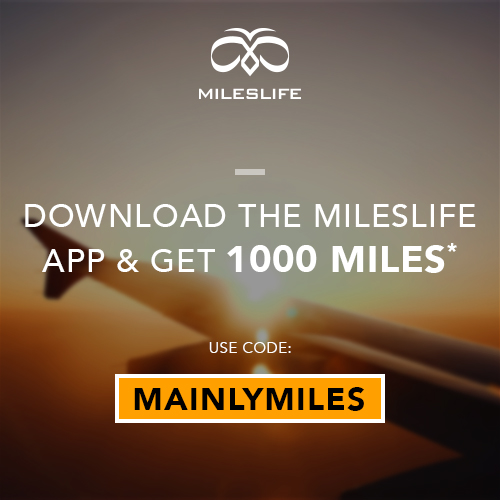 There’s nothing to stop you booking a Mileslife participating restaurant through Chope and effectively earning 200 Chope-Dollars while still accruing the extra frequent flyer miles by paying through the Mileslife app at the end of your meal.

We tested this recently down at Flying Monkey, a great Indian restaurant in the Arab Quarter, and it worked flawlessly. Not only did we earn 200 Chope-Dollars for making the reservation (which is effectively worth 167 KrisFlyer miles), but an additional 3 KrisFlyer miles per $1 spent through Mileslife. After dinner for two with a bottle of wine, that came to an extra 501 miles.

Remember if you haven’t signed up for Mileslife yet, see how to download the app and join here, then use our promo code MAINLYMILES to get 1,000 miles when you first spend $49.

Is it a good value redemption?

The question is, by converting to KrisFlyer miles, what is it costing you? For that we have to look at the alternative redemptions offered for Chope-Dollars. Currently, they can also be redeemed as restaurant vouchers, at 188 outlets in Singapore, with redemption levels as shown here:

Using the KrisFlyer promo code when you make a Chope reservation, in order to get 200 Chope-Dollars per booking rather than 100, does not compel you to convert the points to KrisFlyer, you can still opt for the restaurant vouchers instead.

1,200 Chope-Dollars, which is the minimum conversion ‘block’ to KrisFlyer miles, would therefore be worth anywhere between $30 and $36 as restaurant vouchers, depending on the denomination redeemed.

The alternative conversion, to 1,000 KrisFlyer miles, therefore appears to be a poor deal, at our assumed value of 2 cents each, these would be worth only around $20.

Let’s say Jon is excited about the new partnership between Chope and KrisFlyer, he’s a big foodie and keen traveller too.

Because Jon and his friends and family eat out often, he makes an average of eight restaurant reservations a month using Chope. With this KrisFlyer partnership and promo code, it’s not taken him long to calculate that he’ll net just over an extra 1,300 KrisFlyer miles a month, or 16,000 miles per year by transferring his Chope-Dollars across to KrisFlyer.

As Jon well knows, that’ll be enough for a return flight to Penang on SilkAir in economy (15,000 miles), his favourite spot to sample the delicious street food. Nice to have someone else paying for the trip!

There’s a flaw in the plan though. Jon will indeed be 16,000 KrisFlyer miles richer in a year from now, that we cannot deny. The problem is what he’s given up to achieve it. For every five restaurant reservations he made (and 1,000 Chope-Dollars earned), he was entitled to a voucher for $30 off the bill for his next booking at one of 188 Chope restaurants in Singapore.

Effectively over the year that’s $480 off. So assuming he used the vouchers effectively, which shouldn’t be too difficult with his regular dining habits, Jon would be $480 richer at the end of the year having enjoyed the savings provided by the vouchers, instead of earning 16,000 KrisFlyer miles.

After this is pointed out to him, you can imagine his horror when he discovers this is enough money to buy two return flights to Penang.

So it’s always better to redeem as vouchers?

In pure monetary terms, if you can make full use of the vouchers, yes it’s better. It’s not quite that simple though (is it ever?).

Chope vouchers can be applied to only around 188 restaurants in Singapore at the time of writing (not all 1,000+ restaurants which are signed up to take Chope reservations). This limits their scope significantly.

There are also terms and conditions for voucher use, which vary restaurant-to-restaurant.

Then there’s the old dilemma, if I’m just a few miles short – isn’t this an easy way to get them? Well yes, it is a relatively simple and straightforward way to top up your account by a decent amount if you need it, or if you are genuinely not interested in the restaurant vouchers, or you don’t like the terms and conditions attached.

16,000 miles, like in Jon’s case above, is also not an insignificant volume to add to your account. By themselves, they aren’t too useful, but if Jon already earned say 69,000 miles a year through other means, they are the difference between a premium economy redemption to London and a business class redemption.

Unlocking that difference would clearly be worth more than $480, so it boils down to the same old argument – the value is personal, and what could these miles do for you?

Vouchers can be used in other cities too

Chope is not just operating in Singapore, they’re also in Bali, Bangkok, Hong Kong, Jakarta and Shanghai. You can redeem Chope-Dollars at selected restaurants in those cities in the same way, at roughly the same exchange rate to SGD (it actually looks about 13% poorer value in Hong Kong). Here’s how many overseas restaurants are available by city, as of December 2017: