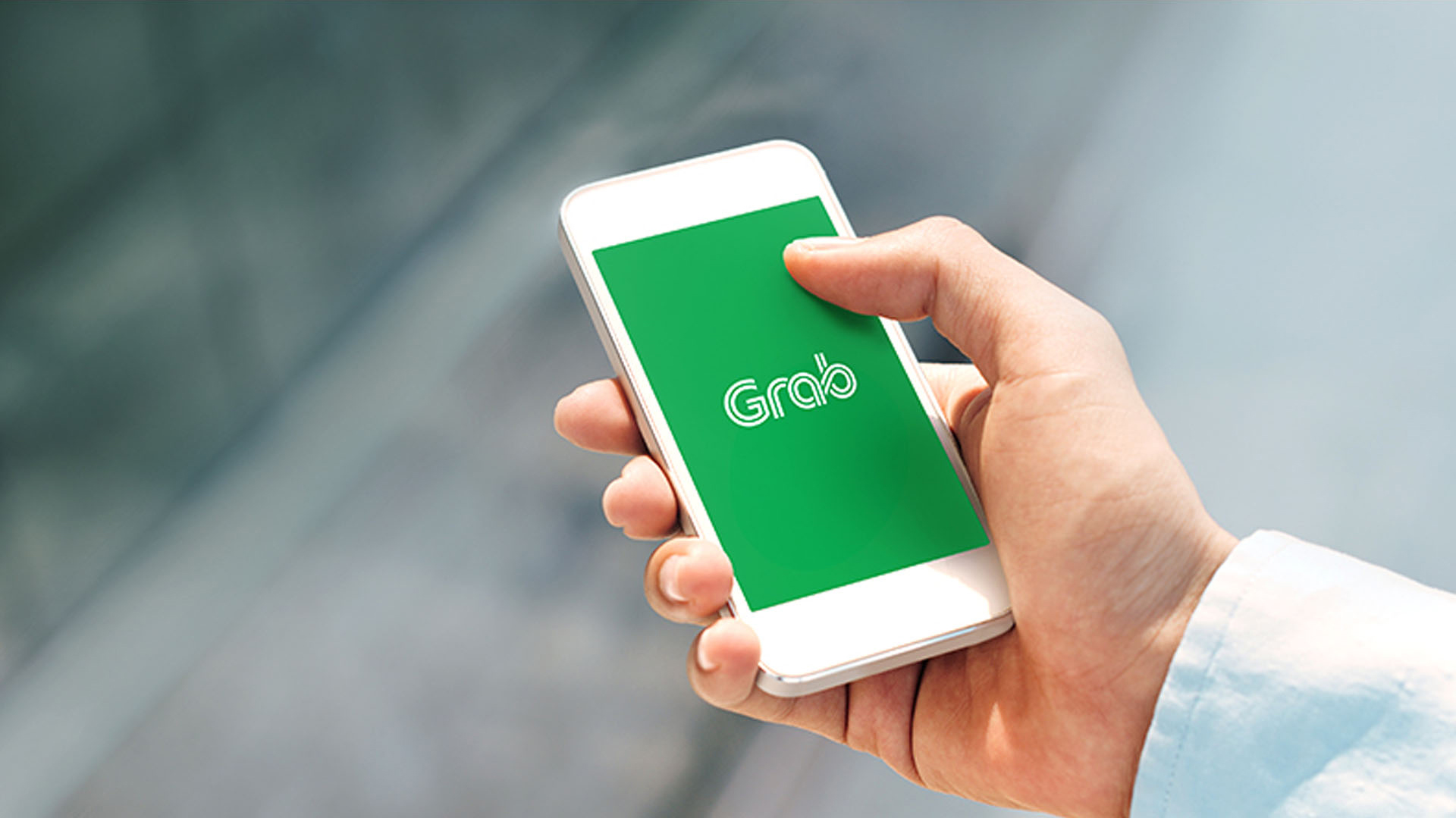 We last looked at the GrabRewards scheme a couple of months ago when they reduced the number of points needed to redeem fixed batches of Singapore Airlines KrisFlyer miles. It was a welcome improvement on the conversion rate, though there were also improvements for other categories too so the bottom line from our perspective was that it still didn’t really represent good value to transfer to KrisFlyer compared to other options.

We’ve been used to the standard rate of 16 GrabRewards points earned per S$1 spent on Grab rides using GrabPay (simply saving your credit card details into the app and using it to make payment each time). That was still the case, until I returned home from work yesterday evening.

Imagine my surprise when I took my usual GrabCar ride to work yesterday morning, a fare of S$13 which awarded me the usual 208 points (16x), only to find that my S$14 trip home from work yesterday evening netted me only 84 points (6x).

Thinking something must have gone badly wrong, I pulled open my laptop and quickly checked the GrabRewards homepage, which showed that indeed the entire earning structure of the scheme has been changed, with no notice, and as far as I’m concerned it’s not for the better.

A simple enough scheme – earn GrabRewards points based on the transaction type and climb the status ladder as a regular user. Points can then be used primarily as retail vouchers, Grab vouchers or converted to frequent flyer miles (KrisFlyer).

Here’s how many GrabRewards points are now awarded per S$1 spent compared with the rates that applied yesterday morning.

With GrabFood, only recently introduced and previously offering 8 GrabRewards points per S$1 spent, there’s another slash in earning rates of between 25% and 63% depending on your status level.

There is one benefit though in the latest changes – GrabPay for in-store purchases. This is clearly the higher yielding revenue stream for Grab and they are willing to encourage more customers to participate in the scheme.

How much more you need to spend

If we show the changes another way, given that most people use Grab for rides and most of our readers are interested in earning frequent flyer miles, here’s how much you will now have to spend on GrabCar rides (using GrabPay) following the changes to earn 1,000 KrisFlyer miles.

The figures speak for themselves, while a Platinum member will have to commit 166% more spending (significantly more than double) to achieve the same award, for basic members it’s over 5 times as much.

Grab vouchers are now more expensive for the most loyal customers

As if some of the eye-watering changes above weren’t enough, for those of us happy to exchange our GrabRewards points for Grab credits off future rides another kick was delivered. Not only do we suffer the significantly reduced earning rate – all Grab vouchers are now priced at the same points level regardless of membership tier.

As I log on to my Grab app this morning a S$5 voucher off a future ride, previously 1,900 points as a Platinum member, now costs 2,200 points. That’s on top of the revised earning system which awards me only 6 points per S$1 spent on rides instead of 16 points yesterday morning. A true double whammy.

That’s over 3 times the spend required on my side. Not only that, it completely disregards the loyalty I have shown in becoming a Platinum member by spending well over S$1,000 in a 6-month period. Now I get the same conversion rate to Grab vouchers as someone who downloaded the app last week.

This really isn’t what ‘loyalty’ programs are supposed to be about.

Indeed the changes haven’t gone unnoticed on Facebook with users already criticising. Here’s an exchange from a Gold tier member yesterday evening, rightly pointing out they now need to spend nearly 4 times more on Grab rides to achieve a fixed value voucher off a future trip: 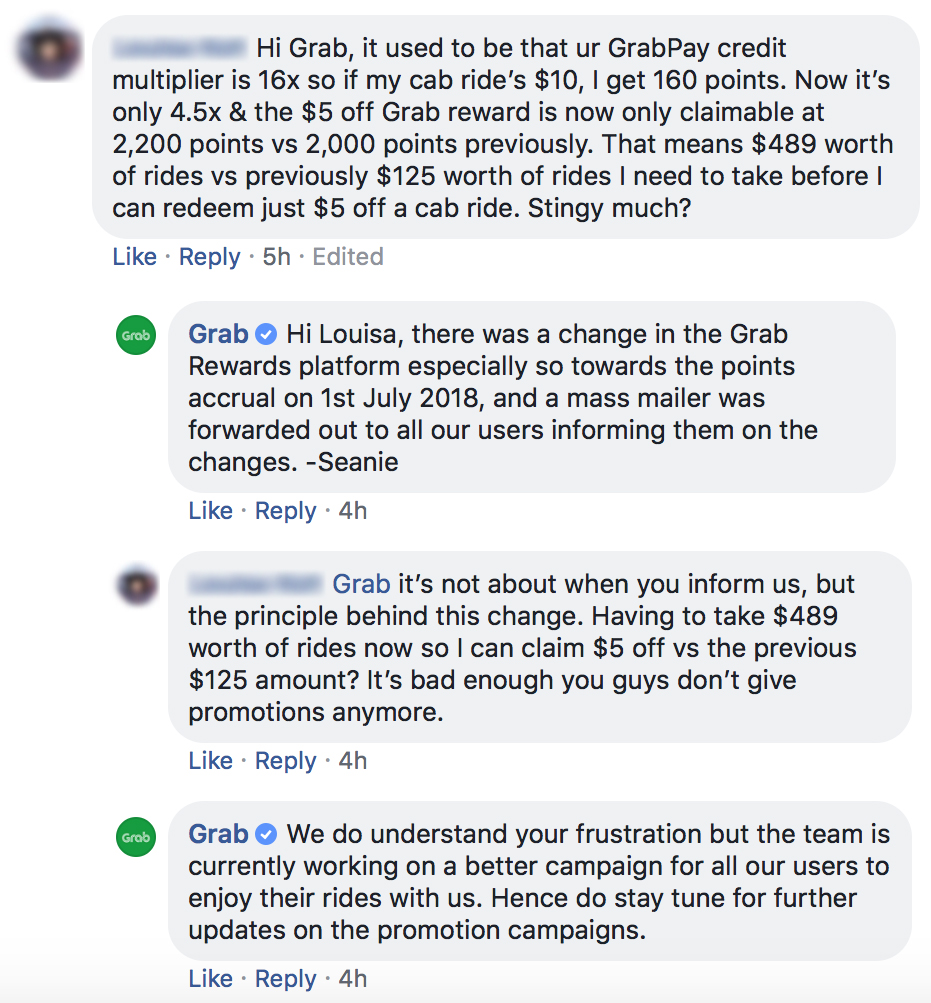 Apparently a ‘mass mailer’ was sent to all users about these changes on 1st July 2018 – but I never got one. Indeed in a email I received on 6th July 2018 Grab were still promoting the original earning rates.

It was quite a surprise following the merger between Grab and Uber in Singapore to find that Grab’s first move on the loyalty scheme front actually improved conversion rates for many benefits, including KrisFlyer miles, as we covered in May. Surprising not least given their newfound monopoly in the market.

Well of course it probably wasn’t going to last, the abrupt earning changes yesterday are almost wholly negative and as far as we’re aware – completely notice-free to loyal customers.

Remember this isn’t a ‘devaluation’ in the true sense – a GrabRewards point is broadly worth the same today as it was yesterday morning (ironically a bit less for the most loyal customers in certain categories).

They are simply making it far more difficult for those of us who earn these points through Grab rides to do so, with some suffering an 88% decrease in their accrual rate. Even those of us least affected (Platinum members) suffer a 63% accrual rate reduction.

Not a single redemption has become cheaper, with some now more expensive for higher status holders.

Granted if you use GrabPay for in-store purchases you are either exactly where you were before or at a 50% advantage (Gold) or 100% advantage (Platinum), so it’s clear this is where Grab see their highest margins, some of which they are able to return to customers through their rewards program.

Let’s be clear – Grab doesn’t owe us a loyalty scheme. Uber, after all, never had one. That doesn’t mean to say once you start one you should discreetly slash its benefits, serving double whammies to the most loyal customers in the process.

Overall this is a hugely disappointing, though not entirely surprising, shift in the GrabRewards scheme.