Good news for those of you who hold the Maybank Horizon Visa Signature card (you may even be looking closely at it following our review of the card on Monday this week) – a new promotion has been announced boosting the miles earning rates on all the spending categories by an extra 1 mile per dollar.

Labelled the ‘Triple One Campaign’ to celebrate Singapore National Day, the offer is valid from 1st August 2018 (today) to 30th September 2018, so you have 2 full months to take advantage.

You’ll need to spend at least S$1,000 on your card in both August and September to enjoy the enhanced rates throughout the promotional period, alternatively you can choose to participate for just one of the two months if you prefer (we clarified this with Maybank).

While the headline rate is clearly in the dining, petrol and taxi fares spend category, it’s the increases for overseas spend and general (local) spending which are the standouts here for us – rising to 3.0 miles per dollar and 1.4 miles per dollar respectively.

Now that the Citi 8 mpd with Apple Pay has ended and the OCBC 4 mpd mobile payments offer comes to a premature end in the next few days, these enhanced rates from Maybank are up there with the best credit cards on the market right now (with the exception of the BOC Elite Miles card, but let’s face it – who actually has one of those yet? Processing will take at least 2-3 weeks from application date according to a BOC representative we spoke to).

Here’s how Maybank break down the number of miles you can achieve in this promotion with an example:

There’s more good news on the overseas spend front. Maybank are only charging a 2.5% foreign transaction fee, so at 3 miles per dollar on overseas spend that’s a very attractive cost per mile of just 0.91 cents. That’s only beaten by the bonus rate on the (still non-existent, in people’s wallets anyway) BOC Elite Miles card.

Effectively this is based on the additional amount you are paying using your credit card over and above using cash overseas obtained at money changer rates. For the full methodology on our cost per mile analysis, see our article from February.

As you can see that’s a very competitive cost per mile on overseas spend during this promotion, which again of course does depend on a minimum total spend of S$1,000+ on the card in each of the calendar months you wish to participate in (August and September if you want to maximise the offer).

If you’re using the Standard Chartered Visa Infinite card to earn 3.0 mpd overseas, previously one of the cheapest ways to ‘buy’ miles, each mile is costing you 34% more than with the Maybank Horizon Visa under this promotion. If you’re using the UOB PRVI Miles card it’s even worse – you’re spending 57% more per mile with that card.

That takes away the worry of whether an online shopping transaction for example will be eligible for the higher earning rate – provided it doesn’t post in SGD it will qualify.

In our full review of the Maybank Horizon Visa published on Monday we broke down some computations on whether you should be using this card to earn the enhanced rate on dining transactions at a restaurant which is also included in the Mileslife program. It’s a little complicated, as Mileslife transactions are not coded under the dining category meaning they will earn at the local general spend rate on this card.

With these new rates though the calculation is slightly different, again assuming you are meeting the S$1,000+ spending threshold in one or both of the calendar months to activate the enhanced promotional earning rates.

Remember the Maybank Horizon Visa card will earn 1.4 miles per dollar for Mileslife transactions during this promotional period.

In summary, at a Mileslife restaurant during this promotion:

Miles are awarded as bonus ‘TREATS Points’ (2.5 points = 1 mile) and will be awarded based on the transaction date. For details of how the ‘TREATS Points’ scheme works and their validity, see our card review.

Remember also the combined cap on ‘regular’ bonus miles, which applies generally to the card (12,000 miles per month, or 30,000 ‘TREATS Points’) remains in force, so if your spending levels are high you may hit this threshold first. Your earning rate would then drop to 1.4 miles per dollar until this ‘Triple One’ offer was exhausted, then down to 0.4 miles per dollar after that.

For a breakdown of how the ‘regular’ monthly cap on bonus miles works for this card, click here to go straight to that section of our full review. If your monthly spend in the bonus categories on this card doesn’t exceed S$4,000 you don’t have to worry about any of this. Above that, take a look as it may affect you.

The cessation of 8 miles per dollar and 4 miles per dollar on mobile payments / Apple Pay seems to be spurring a few cards to enhance their rates lately – notably the recent launch of the BOC Elite Miles card and now the enhanced rates on this card.

Both the 1.4 miles for local spend and 3.0 miles for foreign currency transactions are now up there with the best cards on the market during this 2-month promotion, notably excluding the BOC Elite Miles card though it may be a few weeks before any of us can get our hands on that.

Indeed until the BOC card arrives the Maybank Horizon Visa now represents the best cost per mile rate for foreign currency transactions during this promotion.

The 4.2 miles per dollar on dining transactions is a very attractive rate and if you already hold this card primarily to take advantage of that perk then you’ll no doubt make good use of the bonus in August and September. Be careful at Mileslife restaurants to do the maths on the earning rate before deciding which payment method to use as the calculation has shifted slightly during this promotion.

Do bear in mind the minimum S$1,000 spend in August and/or September using this card to be eligible for the bonus miles in each respective month (do both to get the bonus through the whole 2 month period).

Also remember the ‘regular’ bonus miles cap might come into play before the cap on this +1 mile promotion if you’re spending a large amount each month. For more than $4,000 spending in the bonus category – you need to have a think about it. 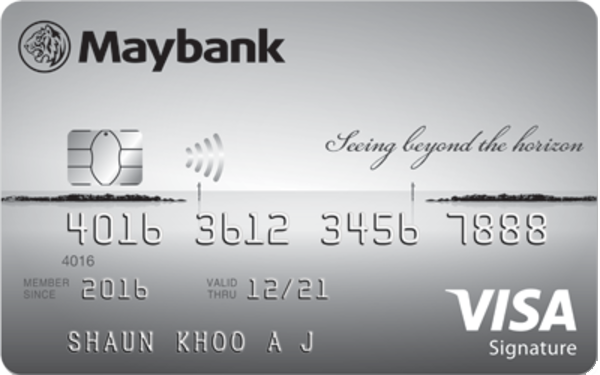