Skip to content
Don't forget to check out KrisShop's 3 mpd offer, worth up to a total of 7 mpd using the right credit card on purchases made by 11.59pm on Tuesday

As you may recall from our article a couple of weeks ago, the Singapore Airlines KrisShop is currently running a double miles promotion, offering 3 mpd instead of the usual 1.5 mpd on your purchases with no cap. Those are in addition to the points you’ll usually accrue with your credit card for the purchase.

Simply log in with your valid KrisFlyer membership number and complete your transaction as usual, between now and 11.59pm Singapore time on Tuesday 26th May.

90 cans of James Squire 150 Lashes Pale Ale delivered to your door for S$192.60 is a fantastic deal, equivalent to around S$12.80 per six-pack. Do be aware though – it’s cheap because the beer expires on 3rd August this year! 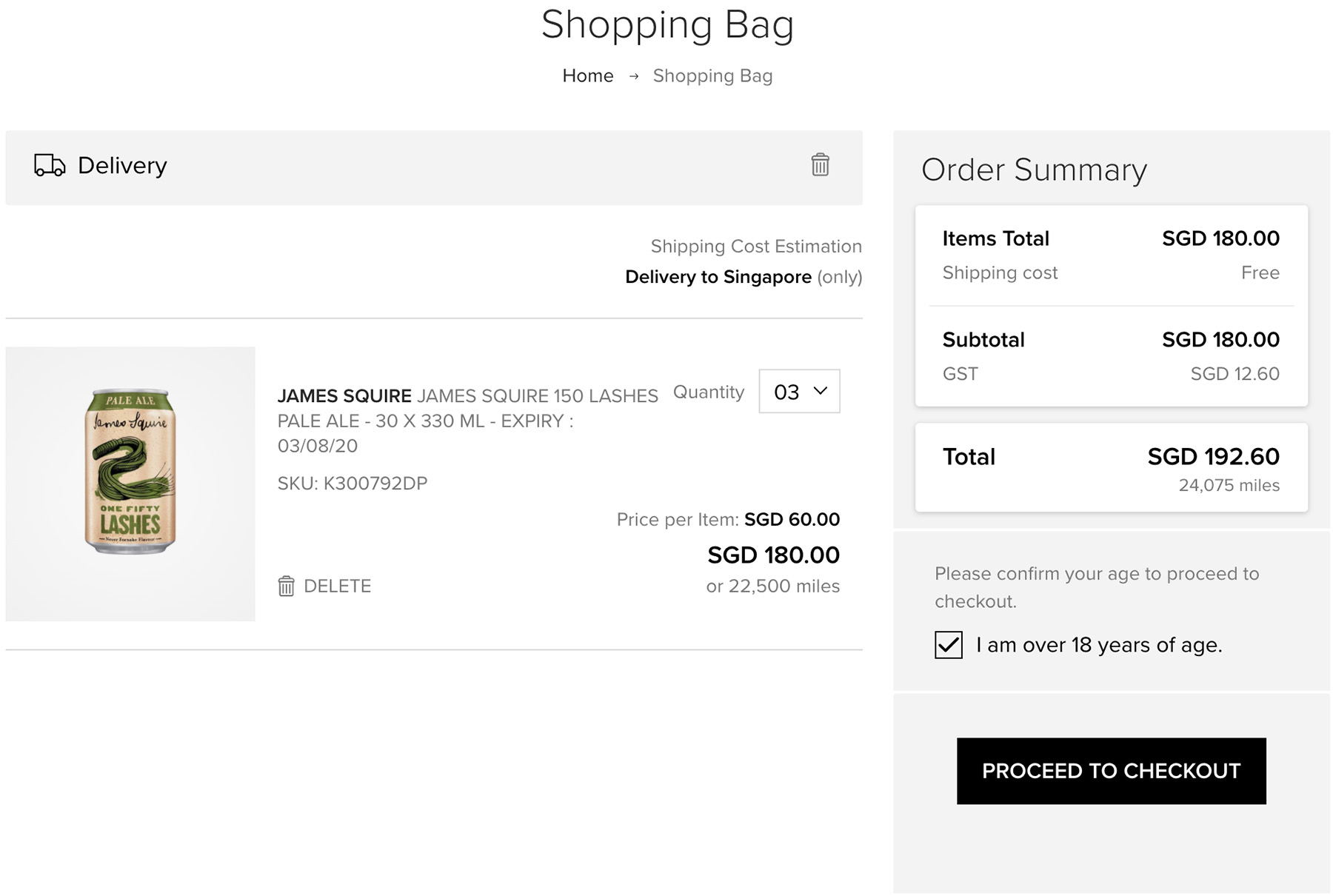 This is exactly the minimum net spend requirement for the 500 miles bonus with payment using any Amex card (S$180 net). Using the Amex KrisFlyer Ascend for this purchase will earn:

Take this S$354.21 net purchase (remember, KrisShop shows all prices as net, excluding GST, until the order summary page when GST is then added). 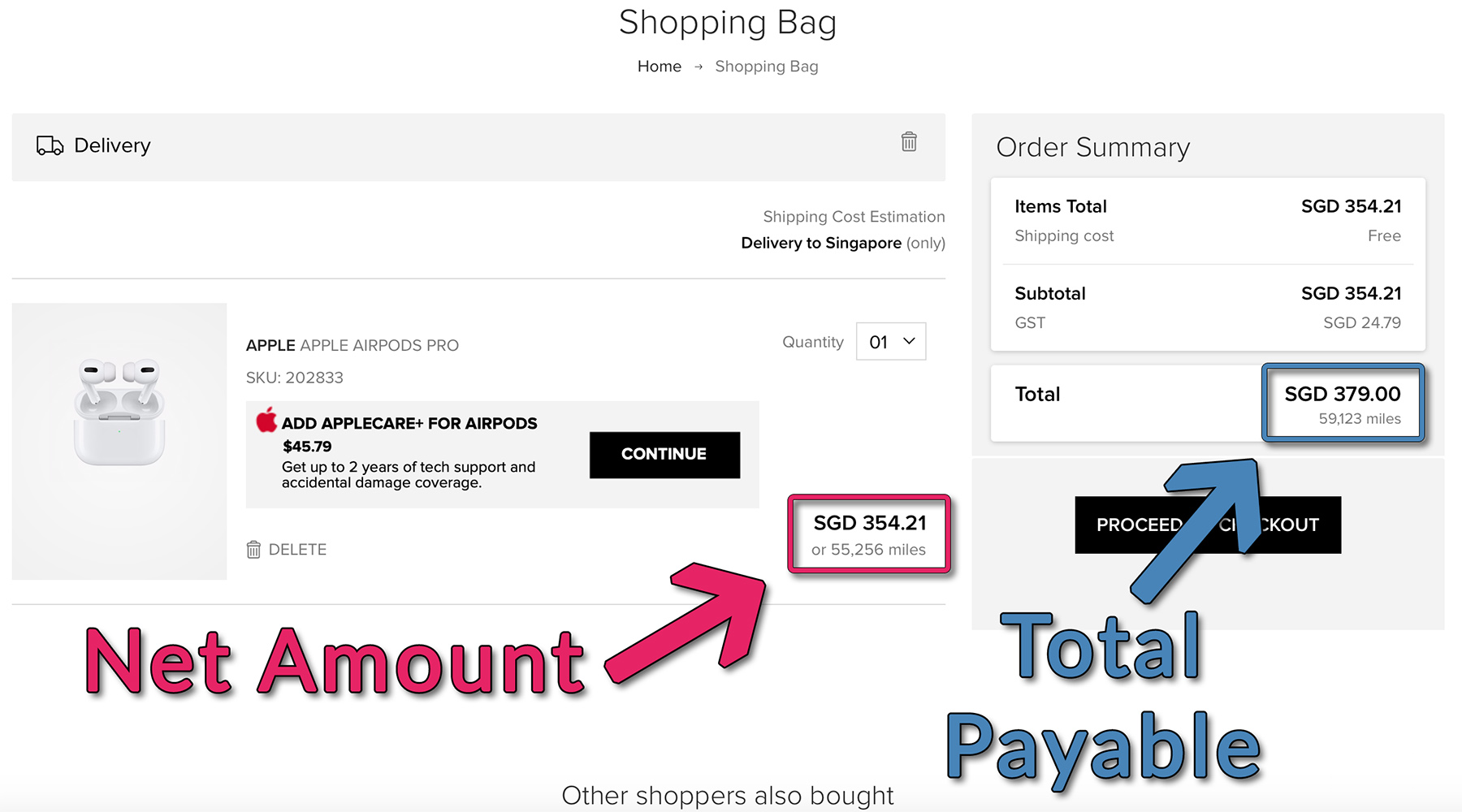 That’s an equivalent 7.44 miles per dollar (2,820 / S$379) at this ‘sweet spot’, an excellent earn rate if you can find a suitable product you like at a competitive price.

We value KrisFlyer miles at 1.9 cents each, so those 2,820 miles are worth around S$53 against future Business and First Class flight redemptions, meaning even if the KrisShop price for your item comes in slightly higher than through another website it may still be worth considering.

For this deal log in with your valid KrisFlyer membership number as usual and complete your transaction with any American Express card.

Pro Tip: KrisShop confirmed with us that you can make as many purchases as you like using any Amex card to trigger the 500 or 1,000 bonus miles multiple times. For example 10 x S$350+ net transactions paid by Amex card = 10,000 bonus miles, on top of your regular credit card points and KrisShop’s 3 mpd.

For example, here’s what you’ll earn using a Citi Rewards card at KrisShop.com for a S$100 net purchase (plus GST, so S$107 total):

Even if the product you’re purchasing is a few dollars more expensive than you can get it elsewhere, the miles you’re earning under this promotion might make it worth buying through KrisShop under this offer.

A nice way to top up your miles bonus over the next three days if there are competitively priced items you’re interested in from the KrisShop. With the Amex offer in particular, or a valid 4 mpd earning card, this deal can stack nicely for effective earn rates upwards of 7 mpd at certain ‘sweet spots’ that trigger the additional miles bonus.

Even with a good general local spend card, like the UOB PRVI Miles earning 1.4 mpd, you’ll be netting around 4.2 mpd from your KrisShop purchases during this promotion, making some items worth considering even if they’re a little more expensive than you can find them elsewhere.