Skip to content
Voted the best Priority Pass lounge in Asia Pacific in their 2017 user ratings, we actually found SATS Premier T2 quite average, and we think there are better choices at Changi.

In mid-December 2017, Priority Pass announced the results of their annual Lounge of the Year Awards, as rated by their 72,000-strong worldwide membership. While the global winner, somewhat randomly, was a lounge in Jamaica (which frankly we are unlikely to visit) there were a host of regional winners in the mix, and the one which caught our eye was the SATS Premier Lounge Changi T2, overall winner in the Asia Pacific category.

That’s no mean feat, as there are hundreds of Priority Pass lounges in the region, including 10 others at Changi Airport alone. As we had a trip planned from T2 the following week, we decided to see what all the hype was about and write a full review of the facility.

We used our Priority Pass to access the lounge, but it’s also available to business class passengers travelling with some other airlines operating from T2, including those flying with Air India, Etihad, Malaysia Airlines and United Airlines.

You can also use this lounge if you’re flying Scoot, and purchase their ‘Scoot-in-Style’ add-on, either in advance or at the check-in counter, currently priced at S$39.

We arrived in the lounge just before 6pm on a Monday evening, and it was relatively busy, though there were still a few seating options available. We found two comfortable armchairs around the middle of the main seating area.

First job as always, is to check the Wi-Fi connection and speed. The SATS lounge in T2, like the one in T3, has an unsecured connection with no password protection. That makes it really easy to access, but possibly a bit too easy! As the lounge was busy, and there could potentially have been users who weren’t lounge guests, it was pretty slow, though not as woeful as their T3 lounge Wi-Fi.

In fact we found that connecting to the Changi Airport Wi-Fi (the #WiFi@Changi network), which is a bit of a faff, as you have to enter an SMS access code sent to your phone, resulted in a much faster connection. Once you’re connected to that – you get free access for 3 hours.

Before we looked around in more detail, we decided to get a drink and some food. It soon became apparent the selection was very similar to the SATS Premier Lounge in T3, which we reviewed last month. Very similar, but a bit less inspiring.

The coffee station was basically the same setup – two “bean to cup” machines which can prepare a variety of drinks like cappuccino or latte, and use Australian UHT full cream milk stored in a cute little fridge alongside.

Not the best ratings we’ve seen, but not bad for a third-party lounge.

There was a basic selection in terms of spirits, with mixers available in the fridge behind, along with canned beer (Tiger and Asahi, though the Asahi ran out quickly), and a soft drinks machine and water / ice dispenser.

A popular section of the food area, which also features in the SATS T3 lounge, is the ‘make your own laksa’ station.

The salad bar was not nearly as inviting as the SATS T3 lounge, a coleslaw and green papaya salad were offered alongside cold meats and cheeses, with a selection of anonymous sandwiches.

The first two hot dishes were a chicken curry with biryani rice, and a fish curry. We tried the chicken curry and it was average, a bit dull and lacking in flavour, unlike the one we tried in the SATS T3 lounge in November. The fish curry was labelled as ‘spicy and rich’ so maybe this would have been a better choice.

The other two dishes were vegetarian noodles, and a mixed vegetables dish which was, rather unfortunately, swimming in a bed of oil. Not the healthiest choice.

There is also a bread station and toaster. 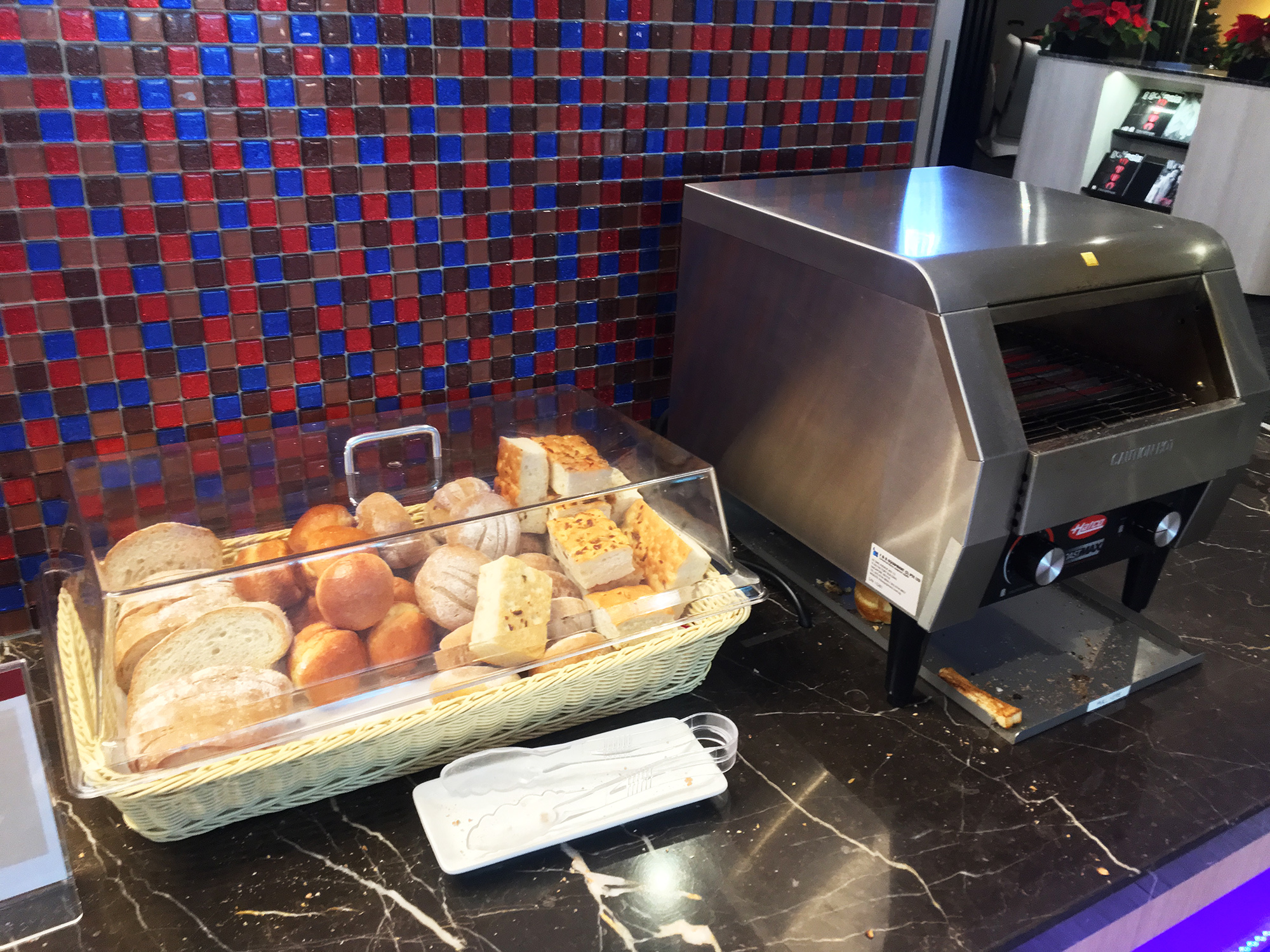 A small fruit and dessert section was fairly uninspiring. There were also some small cakes (not pictured).

Once departure of the Etihad flight was called, around 6.30pm, the lounge became a lot quieter. This gave us the opportunity to take a better look at the seating options and other lounge facilities.

One thing that strikes you about this lounge is the rather intense lighting, it’s a bit too bright almost everywhere to be relaxing. The best spots are probably the quad seats in the far left corner of the lounge against the window, where the lighting intensity was a little more subtle.

The majority of the seating across this lounge is in the large main section, comprised of low armchairs. Each has a table and ample multi-standard and USB charging sockets.

In the dining area, there’s a pair of long tables with high bar-style seating. There are also a few low tables setup for couples, and a continuation of the quad seating alongside the window, which runs the length of the lounge.

If you thought the lighting was intense in the main section of the lounge, in the dining area it’s practically floodlit!

On the left wall of the lounge as you enter the facility, furthest away from the dining area, are eight ‘productivity pods’. These are becoming very popular in lounges lately, and we found these ones clean, sufficiently spacious for solo travellers and a slight respite from the noise to get some work done or just relax in a little solitude.

There are showers available in the lounge, we found them to be of decent cleanliness (not perfect, but acceptable). Towels and basic toiletries are available on request from reception.

Back to Priority Pass

Here’s what Priority Pass said about SATS Premier T2 in their 2017 Lounge of the Year Awards press release:

“The lounge is known for immersing its guests in Singaporean culture with displays of real orchids, Peranakan porcelain and artwork depicting local scenes. The lounge hosts regular cultural events, for example serving mooncakes during the Mooncake festival, to ensure that visitors are treated to a unique experience every time they enter the lounge. Its signature Laksa meal is also a favourite amongst travellers.”

I won’t lie – a couple of times I actually had to go back to the award listing to make sure it was this lounge they were actually talking about! The only thing this lounge “immerses its guests in” is intense lighting.

Overall, it’s hard to get excited about this lounge. The atmosphere is dull, lighting is too bright, seating is mostly boring and unimaginative, Wi-Fi is slow, and the food and drink selection is nothing to write home about.

Quite how it was voted the best Priority Pass lounge in Asia Pacific is a mystery, the very similar SATS lounge in Changi T3 probably has a slight edge on this place, and we much prefer the DNATA lounges in both T1 and T3, and the Plaza Premium in T1 (missing reviews are coming soon).

Notwithstanding the probably undeserved ‘award’ status, it’s probably still a decent respite from the transit area, especially when it’s not too busy, and provides the opportunity for a quick shower in T2 between flights, or after a long day.m