Skip to content
A350ULRs will start arriving in the Singapore Airlines fleet in August 2018, for more non-stop flights to North America. 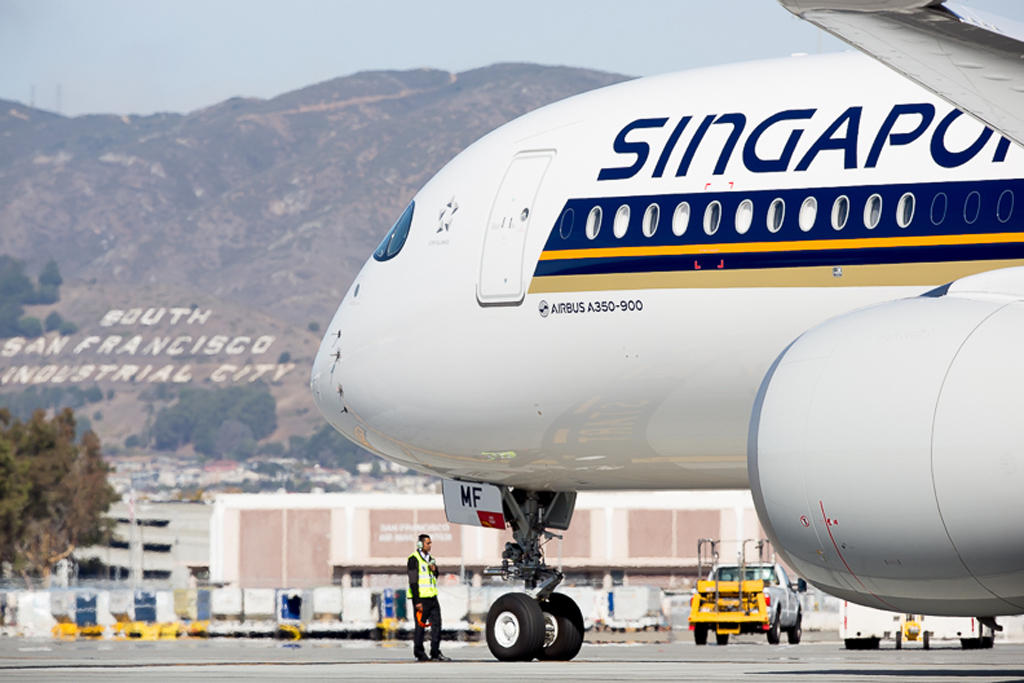 The 21st Airbus A350 for Singapore Airlines departed from Toulouse this morning on its delivery flight to Changi. On the face of it, as it wings its way across the 6,800 miles from France to Singapore burning its free tank of Airbus fuel (yes, you do get a full tank thrown in when you pick up the keys to your new S$395 million plane!), there’s nothing too exciting about the arrival of 9V-SMU this evening.

Singapore Airlines is already the second biggest operator of the A350 worldwide, and this plane is being delivered in the ‘standard’ configuration of 42 business class seats, 24 in premium economy and 187 in economy class.

It’s a passenger layout which has served the airline well as it has ramped up a significant A350 operation spanning anything from 1 hour routes to Kuala Lumpur and Jakarta, through to 8 hour hops serving Melbourne and Tokyo, and as far as 16 hour non-stop legs to San Francisco.

For Singapore Airlines, the A350 seems to be the plane that can do just about anything.

Aircraft 22 to 28 will play a different role

The arrival of the 21st A350 does represent a shift change though. A gap in deliveries is about to happen, and there will be no new A350 aircraft joining the Singapore Airlines fleet until August 2018. But ‘Aircraft 22’, and the six which follow, will be groundbreaking for a different reason.

These will be the first A350ULR (ultra-long-range variant) aircraft to enter commercial service, and one thing’s for sure – Singapore Airlines will not be flying them to KL.

“As part of its philosophy of continuous innovation, Airbus has launched the Ultra-Long Range version of the A350-900. Designated as the A350-900ULR, the jetliner offers increased fuel-carrying capacity of up to 165,000 litres and a higher 280-tonne maximum takeoff weight, enabling service on non-stop flights of up to 19 hours.

“Benefitting from the A350 XWB’s unique flexibility, the extended range capability does not involve installation of additional fuel tanks (just an adaptation of the fuel system within the existing fuel tank), and the A350-900ULR can be reconfigured to the standard long-haul specifications if required by the operator.” – Airbus

Singapore Airlines is the launch customer for the A350ULR variant, launched in October 2015, which has a range of 9,700nm, well in excess of the 8,300nm between Singapore and New York – the longest route announced for the jet so far by SIA.

The A350ULR will be in a two-class configuration, yet to be formally announced but rumoured to be 68 in business class and 94 in premium economy. That likely means business class seating will occupy the entire first and second main sections of the cabin, right back to the third main aircraft door (behind the wing), with premium economy in the single rear section between doors 3 and 4.

In the business class section, expect to see the latest ‘2017 J’ seat, recently introduced on the newest A380 aircraft, which we reviewed last month. That’s assuming they have found a way to squeeze the seat in (the A350 cabin width is about 30cm less than that of the upper deck cabin on the A380).

Compared with the A380, reducing the size of the side console tables / stowage in the middle seats to match the narrower ones found at the window seats might help to achieve this.

In premium economy we expect no big changes from the relatively recent product introduced in 2015 and currently used on the A350 in a 2-4-2 configuration. Sadly it’s the narrowest premium economy seat in the Singapore Airlines fleet at 19 inches wide (whereas 19.5 inches is found in the wider cabins on the A380 and 777-300ER).

Other carriers like China Airlines and Lufthansa went for a more comfortable 2-3-2 configuration in premium economy on their A350 aircraft, and we think Singapore Airlines should have gone down the same route with their aircraft.

2-4-2 leads to narrower seats and narrower aisles, an altogether tighter experience for passengers, which may be a strain on flights of up to 19 hours.

There’s no formal announcement yet about which routes the A350ULR will be deployed on first, but we’ve heard Los Angeles will be launched in September 2018. That’ll likely be followed by New York, and there are rumours of a fourth non-stop destination in North America, which would probably not be served until 2019.

We expect the flight timings on both the Los Angeles and New York routes to closely mimic the previous schedules for these routes.

That likely means a mid-afternoon departure from Singapore, landing into LAX at the same time on the same calendar day. For the return, it should be a mid-evening departure at around 8pm, landing around 6am in Singapore, two calendar days later.

For New York, expect a lunchtime departure from Singapore, landing in the early evening in New York (on the same calendar day), with a late night departure on the return sector around 11pm landing into Singapore around 4am, two calendar days later.

The ULR variant may also be used to replace the baseline A350-900 on the non-stop San Francisco flights, as these currently suffer from load restrictions on the westbound sector during strong headwind conditions, when the flight duration can be around an hour longer than usual.

We have no information about what the possible fourth non-stop destination in North America might be, but our money would be on one of the following:

Once the 7 A350ULR aircraft are delivered, the next batch of A350 deliveries for Singapore Airlines in 2019 are destined to receive the ‘regional’ configuration, sporting the new regional flat-bed business class product which will debut from 3rd April on the Boeing 787-10 (8 of those aircraft will be delivered this year, starting next month, from a total order of 49).