Skip to content
Singapore Airlines has successfully 'densified' the business cabin on the A380, while retaining an excellent product.

On 26th October 2017, Singapore Airlines announced that their newest A380 aircraft, fitted with the latest suites, business, premium economy and economy class products, would make its debut on flight SQ221, the Singapore to Sydney route, from 18th December.

A week later, we found ourselves at the Suntec Convention Centre witnessing the live launch of the new cabin products for this aircraft. Given that we had only kicked off our blog about three weeks earlier, we had to pinch ourselves a little!

Fast forward a few weeks and it was a slightly more despondent atmosphere in the MainlyMiles “office”. This new plane was flying the Sydney route every day, but how would we get on it to try the new product? Full-fare was a non-starter, and the day job for both of us also stood in the way, for a trip that would take at least two days out of our schedule.

So the solution was simple. KrisFlyer miles! Problem being, this flight has been either waitlisted or simply unavailable in both suites and business class for saver redemptions almost every day since the new A380 started serving it. So we waitlisted in suites and business, for every single day one of us could feasibly do it.

On the morning of 4th January, I woke up to the news. The news we all want to see on our phone. 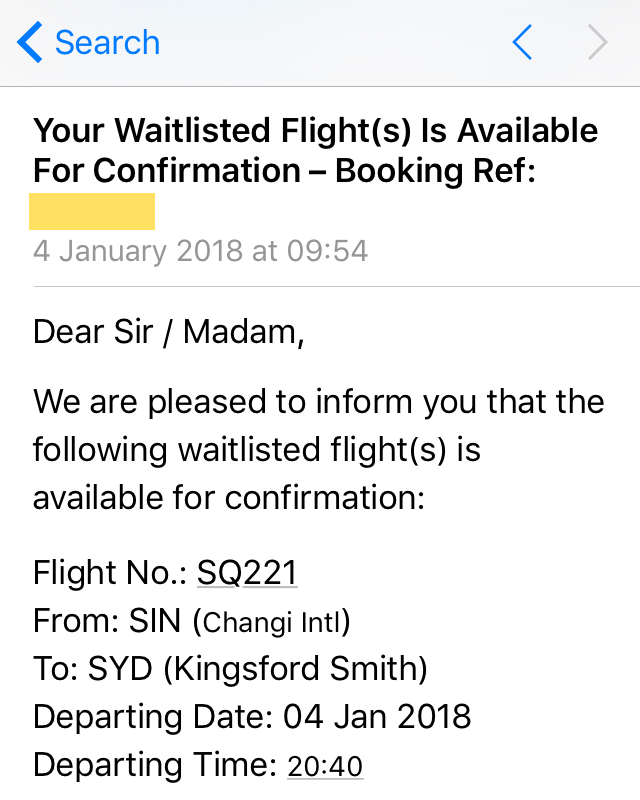 At the time, I didn’t even know which waitlist had come through, as I’d listed for both suites and business on the same flight three days in a row.

Truth is, I didn’t actually know which one I wanted it to be. Suites looks amazing, but it’s a novelty experience, and for most – a one off. Business is what our readers are much more likely to be interested in, as they’ll redeem into that cabin more regularly.

So naturally, I wanted it to be suites. Because it looks amazing.

Anyway it was business, so here goes…

There was no queue at the business class check-in when I arrived around 6.40pm, 2 hours before departure, and I was promptly issued with my boarding card for seat 97A. I had already selected this seat earlier in the day, having checked the seat map on both the Singapore airlines website and ExpertFlyer.

While it was difficult to choose exactly where to sit (all of row 11 was available at online check-in, for example), what I noticed was that the entire rear mini-cabin section of two rows (96 and 97) was unoccupied.

This had to be confirmed using ExpertFlyer as the SIA site shows 96A and 96K as unavailable for selection, but that’s because these are bassinet seats for travellers with infants, not (necessarily) because someone is sitting in them.

As the flight was not particularly full in business class, and there were ample seat choices further forward in the cabin, I figured at this stage it was unlikely anyone else would choose the small rear section, which would give me good opportunity to take some pictures of the window seats, middle pairs and the all-important “double” bed at row 96 (it only truly features here, and at rows 11 and 91).

The T3 SilverKris lounge was relatively quiet at this time of the evening, in contrast to my last trip for a 1am departure to Europe, which usually coincides with a raft of similar departures.

There was certainly no shortage of seating and I chose a high chair at one of the long bar-style tables.

I made my way from the SilverKris lounge around 8pm for the 8.40pm departure. There’s no review of the T3 SilverKris lounge this time, as Eddie is doing a dedicated review later in the week, on a different trip.

I was warmly welcomed on board and directed to my seat. The lead cabin crew in my area explained the seat functions, and also how this was the first aircraft in the SIA fleet with this new cabin product.

Interestingly as we chatted he also explained how he was part of the ‘pioneer crew’ selected to fly on this aircraft (and therefore this Sydney route) for the first few weeks of operation.

On this flight, there were also two cabin crew who, like me, were experiencing the latest A380 product for the first time, under the guidance of the ‘pioneer crew’ members, and were learning about the aircraft layout, seat functions and service schedule.

The crew also confirmed, as we suspected, that the second A380 aircraft arriving this month with the new configuration will be used to add a 3x weekly London rotation.

From the outset I must thank the crew who were all exceptional throughout the flight. Having been asked how to pronounce my name by the first steward, and once it was settled that ‘Andrew’ was fine, this was remembered without fail by all the crew for the remainder of the flight. That made the whole service experience very personal and friendly, which I greatly appreciated.

This seat is well designed, occupies a bigger floor area than the photos I had seen suggested, and has a nice ‘cocoon’ privacy feeling compared with the 2006 J and 2013 J products.

If you’re an SIA business class regular, let’s face it, you’ve been spoiled by seat width for a long time. The 2006 J product, when launched, was frankly ridiculously wide at 34 inches (nearly 3 feet). We all remember the ‘bolster’ cushion, which had to be provided in the early days to act as a second armrest – given the distance between the fixed armrests.

That changed when the 2013 J seat came to the market, first introduced on the 777-300ER and then on the A350, where some seat width was sacrificed to make way for additional storage space. Still, the seat stood at a very spacious 28 inches wide.

It was a surprise then to learn that this latest 2017 J seat on the new A380 would be narrower still, at 25 inches, almost a whole foot less than the 2006 J seat fitted to the existing A380 aircraft.

That said, it still feels absolutely fine, and compares very favourably with seat width in business class across some key competitors:

In fact we struggled to find any airline offering more than 25” business class seat width. One was Iberia on their A330/A340 fleet, which are in a 1-2-1 configuration, and have 26.4” seat width, but Iberia is hardly an SIA competitor.

The offset is slightly more noticeable in the rear cabin, at rows 96 and 97, but exists in all rows of the business class section. It improves privacy, but if you’re choosing your seats at the last minute as a couple and can’t secure a middle pair – don’t expect to be able to converse easily across the aisle in the same row.

I was offered a choice of welcome drink (juice, water or champagne), and couldn’t resist a glass of the Charles Heidsieck, and a hot towel was then provided.

The crew also took the after takeoff drinks orders.

The cocktail tray is fixed in this new seat design, which makes it very sturdy. There is still ample room to walk past it when entering and leaving your seat, without spilling your drink.

Later the crew also asked for my choice of main course (there is a fixed starter and dessert option on this flight, more on the menu and food later).

At the scheduled departure time of 8.40pm, the Captain welcomed us on board over the PA and explained that we would be a few minutes late due to Air Traffic Control. We then pushed back from the gate just 4 minutes behind schedule.

During the taxi out the usual safety video is shown, then in business class there was a video presentation about the new seat functions which included instructions on how to fold the mattress cover over the seat, and recline it into bed mode yourself if you wished.

Unlike the previous 2006 J and 2013 J business class seats, which fold over to reveal a mattress on the reverse side, in the new 2017 J product the seat reclines into a flat bed more conventionally, on the upper-facing side, which does make it easy to do yourself.

The cabin crew of course are still happy to do this for you on request.

This seat has several places to store your belongings, most are very neatly and thoughtfully placed to keep items within easy reach throughout the flight.

At the back of the side table there is a handy pocket-sized stowage for storing your mobile phone, which is also equipped with a USB charging socket. It’s worth mentioning here that the side tables in the middle D/F seats are noticeably wider than at the window A/K seats (see below, side table at seat 97A on the left, and at seat 96F on the right).

The side stowage features a recessed area for smaller items, above which and behind a door is a multi-standard charging socket with integrated USB charging port, and an NFC contactless payment reader which is currently not in operation but which could be used in future for purchase of Wi-Fi, duty free goods, and instant upgrade to suites.

There is also a larger storage area where magazines and the safety card are stowed, ideal for bottled water and laptop computers or iPads. Ideally your devices can be kept here while on charge.

Note how my 12″ MacBook fits neatly into the stowage with ease.