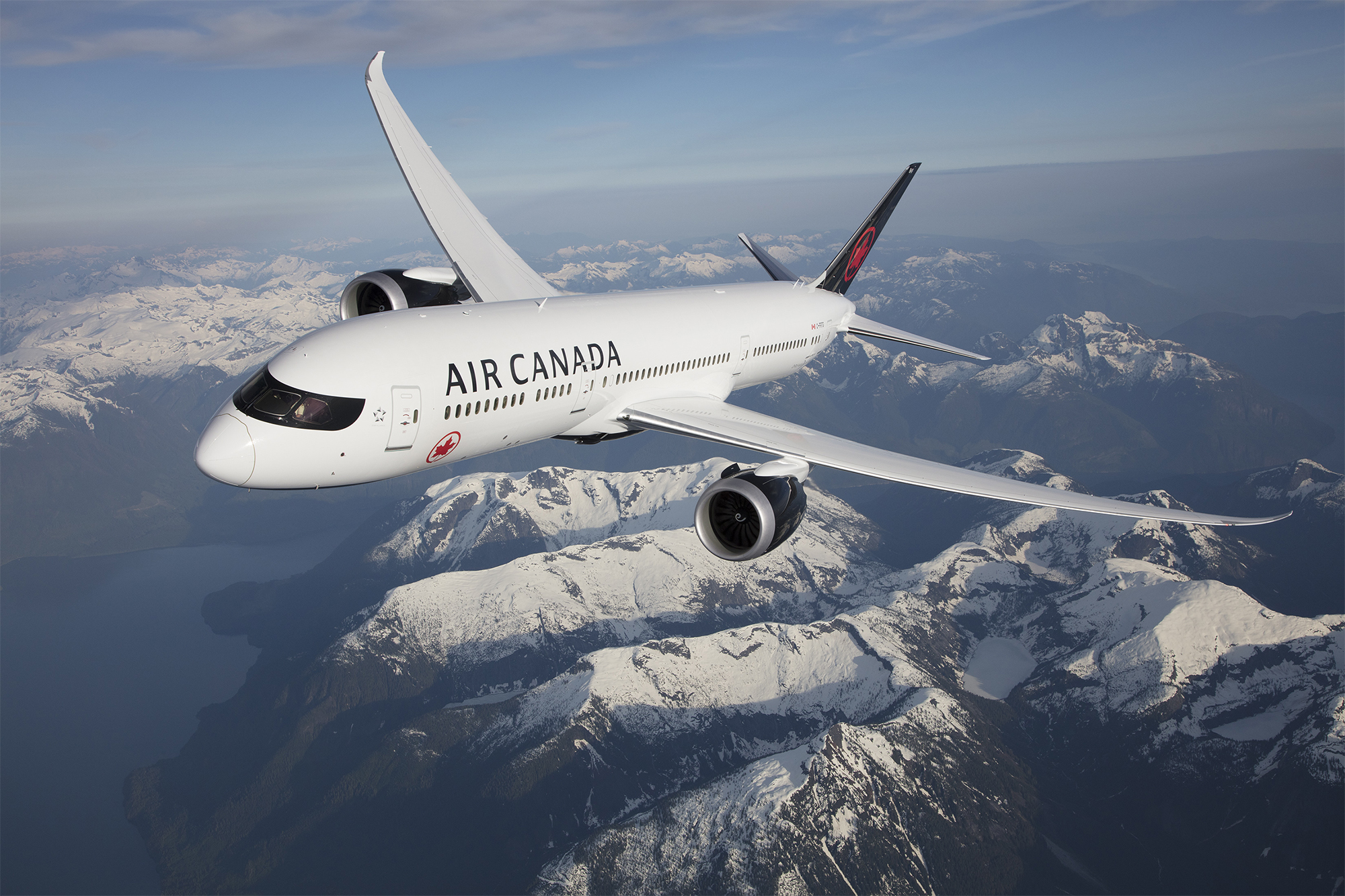 One of the great benefits of accumulating KrisFlyer miles is not only for redemption on Singapore Airlines and SilkAir flights, but also the option to secure award seats on other Star Alliance airline flights and those of SIA partner airlines.

In this article we’ll take a look at the Star Alliance options and leave partner airline redemptions for a later date.

Cast your minds back to November last year when we were reporting on the devaluation of the KrisFlyer Star Alliance redemption chart. At the time we promised ourselves to have a good look at the new chart to check if there were any ‘sweet spots’ and good value options left and we’ve finally got round to it!

Remember the chart pricing is for round-trip awards, a one-way ticket requires half the stated mileage.

Why do a Star Alliance redemption?

Singapore Airlines undoubtedly has some of the best cabin products and service in the business, pretty much whichever class you’re flying in, so why would you use your KrisFlyer miles to fly on a Star Alliance airline instead?

To us there are three key reasons:

There’s another reason some people may justify it too:

Do remember for the latter category though to make sure you are still getting good value for your redemption. For example if you want to try out Lufthansa First Class then flying from Singapore to Frankfurt for 129,000 miles is not a good redemption. The Middle East to Europe for 60,000 miles, Europe to South Africa for 70,000 miles or even Europe to the USA for 90,000 miles represent much better value.

Are there any ‘sweet spots’ left?

Yes there certainly are, though not all are terribly useful for those based in Asia. We found a number of excellent deals if your travels take you to Europe, the Middle East, Africa or the USA / Hawaii. 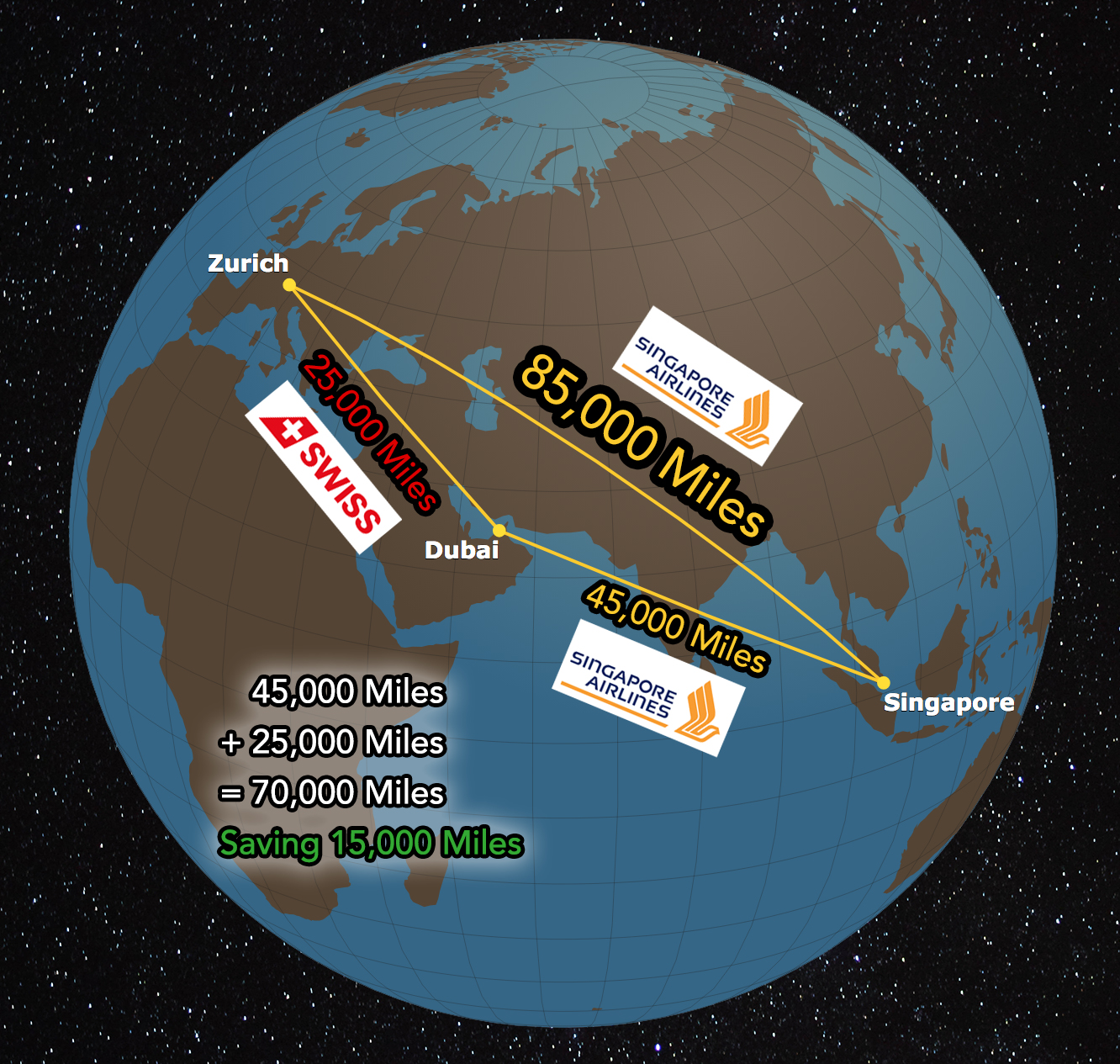 That’s because the Business Class Star Alliance redemption rate between the Middle East and Europe is only 25,000 KrisFlyer miles. The Singapore Airlines site won’t let you book this itinerary as a single ticket for 70,000 miles because it is an invalid routing but you are free to book the two legs separately. Just remember to build in suitable contingency, or perhaps plan a night or two in Dubai to break up the journey.

In another example not many people realise you can take a cheap Scoot flight from Singapore to the Maldives (S$191) for a couple of days in paradise then continue your journey to Europe from there on Turkish Airlines in Business Class for 47,500 KrisFlyer miles.

That’s a significant saving on the 85,000 miles a Singapore Airlines or Star Alliance Business Class saver redemption to Europe would cost you and potentially opens up a much wider choice of European destinations than SIA offer given the extensive Turkish network. It’ll also buy you some time in the excellently rated Turkish lounge in Istanbul.

It’s important to note that we haven’t specifically assigned all the examples shown into one of these two categories – it’s fairly obvious where a definite ‘sweet spot’ exists but many other routings would probably be best called a ‘good value’ redemption.

Taxes and fees may be higher

Remember that since Singapore Airlines no longer applies a fuel surcharge on award tickets you may find yourself paying quite a bit more cash than you would normally expect on top of the KrisFlyer miles rate to secure Star Alliance redemptions.

Lufthansa for example still apply a steep fuel surcharge, in some cases adding hundreds of dollars to your miles cost.

It’s not all bad news though – United redemptions within North America and Hawaii carry only US$5.60 of additional cost on top of the miles rate, and during our searches we also found that Ethiopian Airlines does not add a fuel surcharge to award tickets.

Between Singapore and Europe

Poor value in Economy Class or First Class where the mileage rates are higher than a saver award ticket with Singapore Airlines (38,000 and 115,000 miles respectively), however the Business Class redemption rate matches the SIA saver award rate at 85,000 miles one-way.

That means there’s an opportunity here to redeem on another airline like Lufthansa, Swiss, Turkish or Thai to Europe when a saver redemption on SIA is not available or you’re flying somewhere a bit more obscure.

There are no Business saver awards with Singapore Airlines to London this coming Thursday, so why not book this Thai Airways / EVA Air routing via Bangkok?

When you’re heading to London don’t forget to check flights to and from London Gatwick – Turkish provide a good option here.

Heading slightly off the beaten track doesn’t mean ditching Singapore Airlines either, you can combine an SIA and Star Alliance award flight if you wish. The Star Alliance redemption rate then takes precedence, but to Europe it’s the same in Business Class anyway.

Between Europe and North America

Since North America is a single redemption zone on the KrisFlyer Star Alliance award chart it’s far better value to use your miles to fly between Europe and the West Coast of the USA or Canada (like Los Angeles or Vancouver) than it is to the East Coast (like Boston or New York) as the mileage rate you’ll pay is the same in both cases.

A great rate in Economy Class here, a definite ‘sweet spot’ if you are able to exploit the maximum distance between these zones (e.g. Eastern Europe to West Coast USA).

Business Class isn’t bad at 65,000 miles – not great value from Western Europe to the East Coast of the USA where flight times are around 7-8 hours but again if you head all the way to the West Coast of Canada or the USA there’s good value here.

First Class is pretty much restricted to Lufthansa on this route, remember that Swiss First Class redemptions are blocked to KrisFlyer members. First is of course an aspirational experience, which can include the Lufthansa First Class Terminal at Frankfurt, but at far superior value on this routing compared with say an Asia to Europe redemption.

Not exactly a ‘sweet spot’ but Lufthansa First Class from Frankfurt to San Francisco is significantly fewer miles than their Singapore to Frankfurt flight in this cabin (129,000).

Expensive at 27,500 miles in business, but 12,500 miles in economy can make sense for longer or more costly routings. More often though it doesn’t make sense. Europe is relatively cheap to fly around, especially booking well in advance with a number of low-cost airlines and competitive fares from the full-service carriers too.

As always the key is to know the cost and get good value for your miles. Here are a couple of examples where that’s not the case.

Flying from Paris (CDG) to Frankfurt with Lufthansa in economy class a month out is a poor redemption. Europe is a single zone – so the number of miles needed is ridiculous for such a short hop:

The actual fare for a firm ticket is also low: 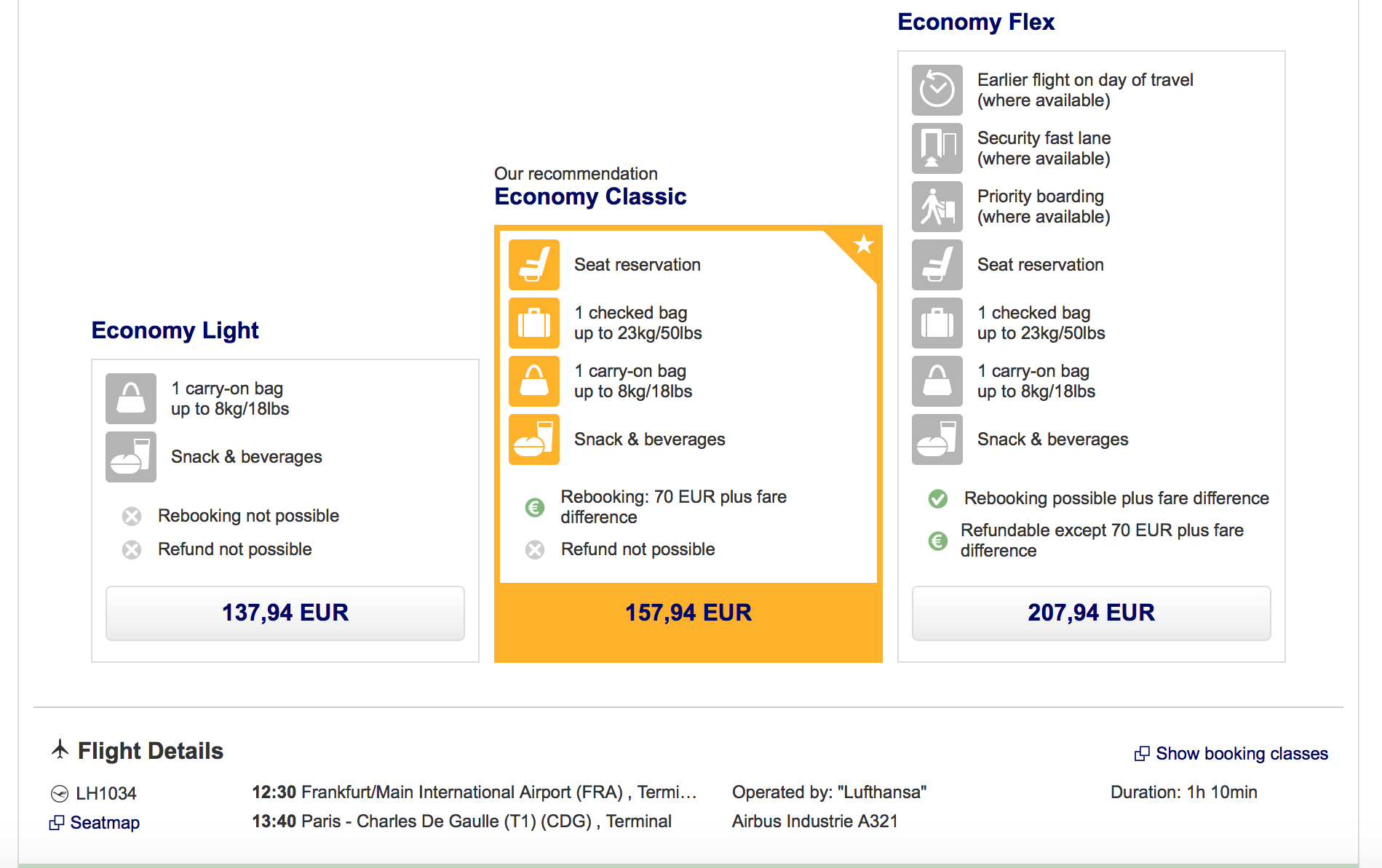 Ok so if a short hop isn’t worth it, what about a longer flight? Again let’s look about 3 weeks from now and fly the longer 3-hour flight from Malaga to Frankfurt.