Skip to content
An airport transit hotel designed for a short-term sleep is never going to be the epitome of luxury. Here Plaza Premium hasn't done a bad job.

Changi Airport boasts three ‘transit hotels’, located in the airside areas of T1, T2 and T3, in addition to the Crowne Plaza hotel connected to T3 in the landside (public) area. We reviewed the (excellent) Crowne Plaza in December last year. The T2 and T3 transit hotels are under the ‘Ambassador’ brand, while the T1 option is slightly different – the ‘Aerotel’ – Plaza Premium’s answer for a short airside rest spot, which opened in February 2016.

Apparently the world’s first transit hotel with an outdoor pool, the Aerotel has a few other benefits that set it apart from your regular short-term airside resting spot. We spent a night here in July 2018 to try it out.

The first thing to note about the Aerotel is that it’s not accessible to the public. This hotel is in the transit area of Terminal 1 and can only be reached by those holding a valid onward or outbound boarding card.

The location is near gate D41, at level 3 (up the escalator from the main departure concourse).

Even if you aren’t travelling to or from Terminal 1 – Terminal 2 is connected via a SkyTrain right below the hotel that takes about 4 minutes. For Terminal 3 it’s a 10- minute walk through the departure concourse to a SkyTrain from the ‘C’ gates for another 4 minute ride, so less than 15 minutes in total.

For some gates in Terminal 2 (E26 – E28) and Terminal 3 (B7 – B10) there is no need to take the SkyTrain as those gates are very close to T1 and the SkyTrain to those respective terminals actually drops you off further away from these gates than you would have started! Just walk to those gates as if they were in T1, they are well signed.

For a departure from Terminal 4 you will need to take the SkyTrain to T2 then the transit shuttle bus from gate F51. Do allow some additional time for this, we would recommend about 30 minutes.

Bear in mind that the SkyTrain does not operate between 2.30am and 5.00am. There are very few flight departures between these hours but if yours is one of them – prepare to allow more time for the walk.

We booked the Aerotel from 6pm through to 7am the next morning, as we had a booking on the Singapore Airlines SQ856 A380 Suites which departs at 9.55am.

Of course we had wanted to review one of the transit hotels at Changi, however this gave us the added advantage of being able to enjoy both dinner and breakfast in SIA’s flagship lounge – The Private Room, with a splash of Dom Perignon in both cases, to kick off our round-the-world First Class adventure in style.

Look out for our review of The Private Room coming soon.

As many of our readers will know you can check in for your Singapore Airlines flight and have your boarding pass issued up to 48 hours prior to departure, with several other airlines at Changi also offering early check in, which would therefore allow you use of the transit hotel for a few hours.

Say you’re heading to Tokyo with JAL at 2am, but you’ll be forced to check out of your city hotel at lunchtime. JAL early check in opens 12 hours before departure, so you can make your way to the airport in the afternoon, check your bags in and have your boarding pass issued, then get some sleep and a shower at the Aerotel before making your way to the gate around 1am.

There was a small queue of guests checking in when we arrived however despite that the process was quick and we were checked into our room within 10 minutes.

Three corridors lead off from the hotel lobby area depending on your allocated room number.

We booked a ‘Double Plus’ room which featured two beds and private en-suite bathroom facilities.

The room was spacious, for an airport hotel, and was clean and modern. According to other reviews the room size does vary slightly with some boasting even more space than the one we stayed in.

A decent sized desk is provided if you have some work to catch up on, with a couple of power sockets and a phone.

This particular room was runway facing with a small window, however do note that some rooms in this hotel don’t have a view at all as there is no external window.

There appears to be no way to know whether your room will have a window in advance, though there’s certainly no harm specifying a preference for one or making a request on check in if you think you may find a windowless room claustrophobic.

We found the en-suite bathroom to be clean and spacious with a shower but no bath.

The large rain head shower was very good and a perfect way to freshen up before your flight.

Basic toiletries are provided – you might want to bring your own or alternatively treat yourself to something new at the duty free shop just downstairs.

Be aware of liquid restrictions on your next flight though as security is at the departure gate at Changi T1, T2 and T3, or immediately after you disembark the transit-side transfer bus if you’re heading for T4.

Some additional complimentary amenities in the bathroom included two toothbrushes and toothpaste, a comb and a dental kit, so you don’t have to worry too much if your personal toiletries are in your checked baggage.

Power sockets by the bed were multi-standard type and also included USB charging so all your devices should be fully recharged once it’s time to head for your flight.

Tea and coffee in the room was basic, as you’d probably expect. Complimentary bottled water was also provided. There are several options close by in Terminal 1 at the main departure concourse for a more elaborate selection, including Starbucks and a 7-Eleven.

Unlike a typical hotel room there is no wardrobe to speak of in the Aerotel, on the assumption you will be travelling with hand luggage only and will be staying for a few hours up to a maximum of one night, there’s really no necessity.

Instead there are a couple of hanging options and a luggage stand, which should more than suffice for your short stay.

Unlike most airport transit hotels, which tend to feature just a check in desk and a bank of rooms, there are three principal additional facilities at the Aerotel:

The ‘fitness corner’ is just that – a small space with basic equipment for a quick workout. It wasn’t being used each time we saw it during our stay. No competition with fully equipped gyms found in most hotels, however this one is likely sufficient for most guests staying here for a few hours.

The outdoor swimming pool, jacuzzi and bar is a fantastic facility to have at an airside transit hotel. We went for a swim in the early evening however and it was packed with all the sun loungers occupied (though we later secured a pair).

This facility is obviously well known, able to be booked in isolation or by walk-up, and there were a number of people with later evening flights taking advantage.

The following morning we were able to take some pictures of a more serene atmosphere when we checked out at about 7am, with only one couple sat by the pool.

The ‘library lounge’ is a relaxation area with chairs and sofas. There’s a food and drink menu available too, and with a meal package it’s here you’ll be provided with the time-appropriate food as part of your stay. Note that your meal unfortunately cannot be served in your room.

There are nice views from the library lounge across the aircraft parking area and runway. 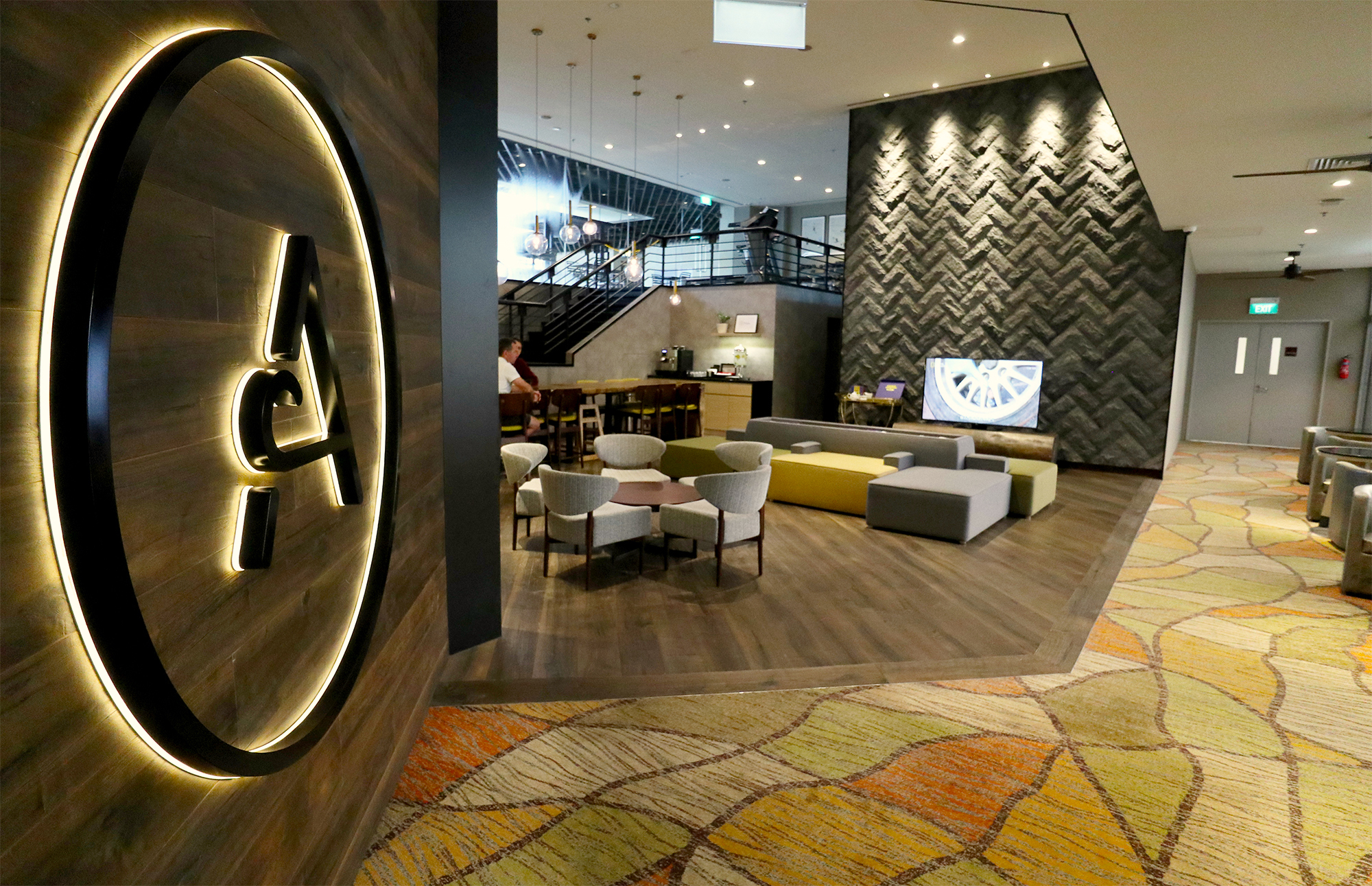 The Aerotel features three room types based on size. Previously called ‘S’, ‘M’ and ‘L’, these have been renamed and are now referred to as:

The Solo Rooms are equipped with a 32″ TV, while the Double Plus Rooms and Family Rooms have a 42″ TV and also feature different pillow options.

The ‘shared bathroom’ concept for the Solo rooms sounds a bit dormitory-style, however each toilet and shower room are private and secure once you are inside. You may have to wait for one to be available however.

The Aerotel brand also has similar facilities at the following airports:

and will also open future hotels at London Heathrow airport and Guangzhou soon.

If the idea of an international airport hotel conjures up some romantic vision in your mind, you’ll have to temper your expectations here.

You won’t be sitting in a softly-lit bar overlooking the runway with a live jazz backdrop while the mixologist turns out dazzling Vesper Martini’s, nor will you be tucking into hors d’oeuvres with your complimentary glass of Sauvignon Blanc in the well-appointed club lounge. Let’s face it, this place is really just for sleeping.

For what it is though, the Aerotel Singapore Changi T1 fits the bill – a quiet, clean room designed for a few hours rest then a freshen up between flights.

Most facilities are on the basic side, there is no room service for example (and no hand-crafted Martini bar), however the swimming pool and small gym are nice perks to have and rooms are recently completed, clean and a decent size. Soundproofing is good, just the quiet muffled rumble of jets taking off and landing is detectable but this didn’t prevent us from sleeping well.

Admittedly the land-side Crowne Plaza hotel attached to Changi’s Terminal 3 trumps this hotel in almost every aspect – except one. Location. For a short rest you can’t argue with walking straight from your gate to this hotel, then walking straight to your new gate after some precious sleep and a shower.

Example non-refundable rates for a 6-hour stay in September 2018, including a meal:

Additional hours are charged at S$20 per hour regardless of room type.

Alternatively the non-room ‘facilities only’ packages include: