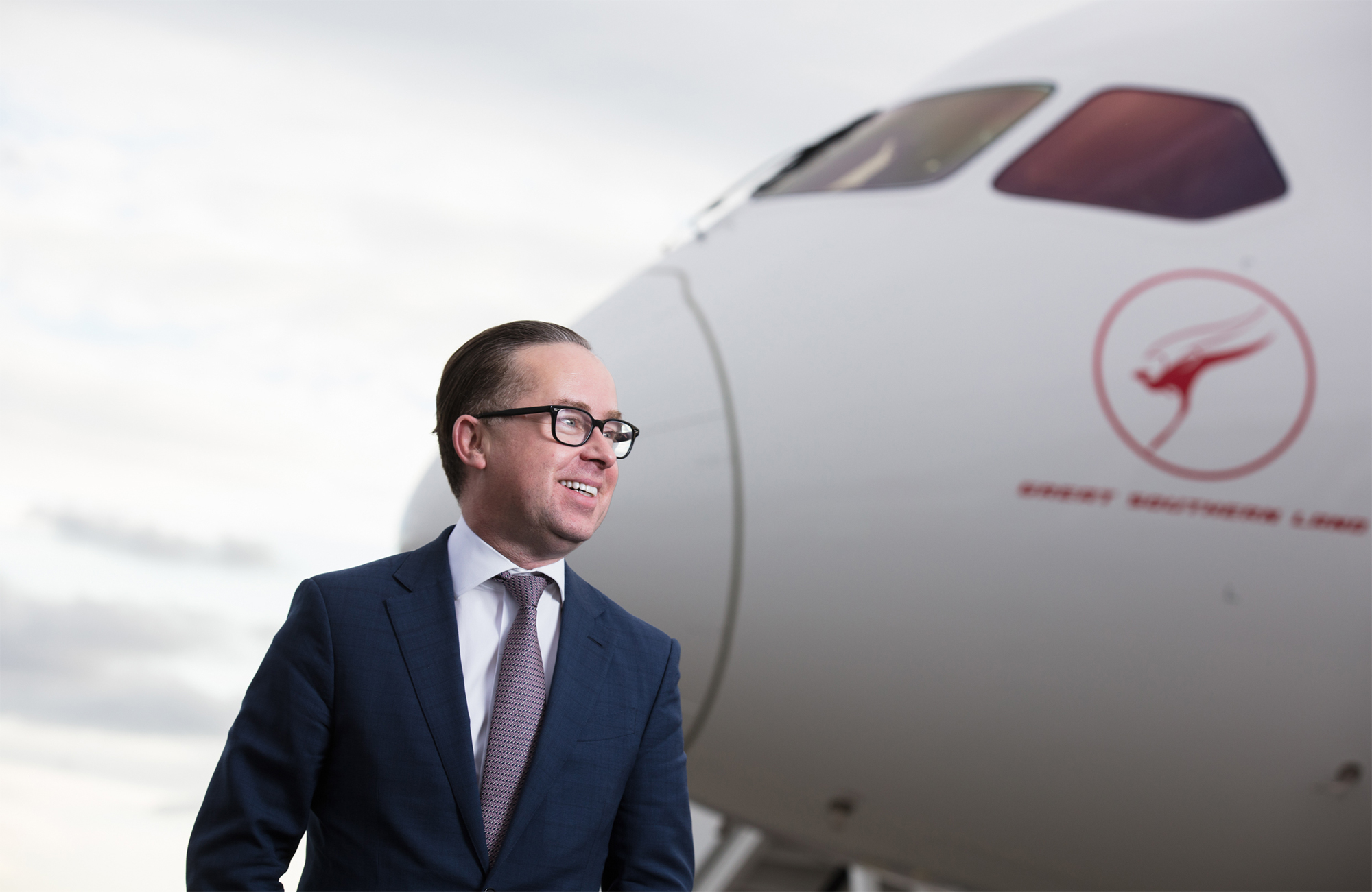 A few minutes ago the first Singapore Airlines Airbus A350-900ULR to enter commercial service, 9V-SGB, lifted off from Changi as SQ22 bound for New York’s Newark airport. 17 hours and 20 minutes of flight time lie ahead of it, meaning SIA has re-taken the accolade of operating the world’s longest passenger flight.

It’s a big victory in the aviation record stakes, made only slightly bittersweet because SIA actually flew this route before – nearly five years ago. It was discontinued then only because of spiralling fuel costs combined with fuel thirsty four-engined A340-500 aircraft previously deployed on this 15,000km city pair.

Efficient twin-jet aircraft like the Airbus A350, Boeing 787 and the upcoming Boeing 777X are writing a new rulebook for these kind of ultra long-range flights. This flight marks the first chapter in that book, and Singapore Airlines should rightly be immensely proud of that fact.

Like any good book though this one has more chapters to come – and they’re being drafted even as SQ22 flies towards Newark this evening. Sydney-based Qantas is leaving the aviation community in no doubt it will be next to fly ultra long-range flights and when they happen they’ll be even longer than this one.

There’s some breathing room for Singapore Airlines before it has to unlock the trophy cabinet for its oneworld rival – Qantas is still to place an order for its ultra long-range aircraft. Both Airbus and Boeing think their existing jets can be successfully modified to take on the challenge, with the A350-900ULR, potential A350-1000ULR and 777-8X initially in the running.

Two months ago during its annual results announcement, Qantas CEO Alan Joyce formally discounted the A350-900ULR, the plane SIA has chosen as their ultra-long range workhorse.

The aircraft is probably too small for Qantas’s goal of a 4-class configuration on these routes totalling 300 seats including an Economy Class offering. The formal ‘request for proposal’ now narrows the choice down between the Airbus A350-1000ULR and Boeing’s 777-8X.

This generates the real possibility that Singapore Airlines may end up being the only operator of the A350-900ULR.

Qantas has slated a decision on its order by next year with service introduction likely in 2022 on the Sydney to New York and Sydney to London routes. The latter would clock in at just over 20 hours.

Linking the east coast of Australia non-stop with cities like Paris, Chicago and Frankfurt has also been mooted, not to mention Melbourne to London, as part of what the Aussie carrier dubs ‘Project Sunrise’.

Tonight’s momentous SQ22 flight is, incredibly, shorter than all but one of those city pairs. Sydney / Melbourne to London alone covers 10% more distance (1,700km) than Singapore to New York. Even Sydney to New York is 4% longer (669km).

Beds in the cargo hold?

Qantas recently announced some rather outlandish plans to examine the case for features such as sleeping quarters and exercise areas in the aircraft cargo hold on these new ultra long-range aircraft.

While these plans sound far-fetched, there is some logic here. Ultra long-range aircraft usually cannot carry much if any freight once the passengers and their baggage are accounted for. The remaining weight allowance must usually be given over to fuel. This will be especially true for Qantas, who wants an Economy Class cabin to feature on its 300-seater ULR planes.

Indeed the Singapore Airlines A350-900ULR flying to Newark tonight, in common with the 7 such aircraft the airline will operate by the end of next month, has a deactivated 3,062ft³ forward cargo hold.

That space can be re-activated later if SIA choose to return these aircraft to regular range flying, subject to some certification paperwork and installation of the (heavy) cargo loading system – the wheels on the cargo hold floor which drive the containers into place.

For now though that’s a lot of space not being used for anything on its ULR jets.

Whether any of this will materialise remains to be seen, however Qantas is said to be in talks with Zodiac Aerospace and Airbus about the concept, which should be available on the A330 as early as 2020 and potentially the A350 soon after.

Here is the new list of the 10 longest non-stop commercial passenger flights operating* by distance. 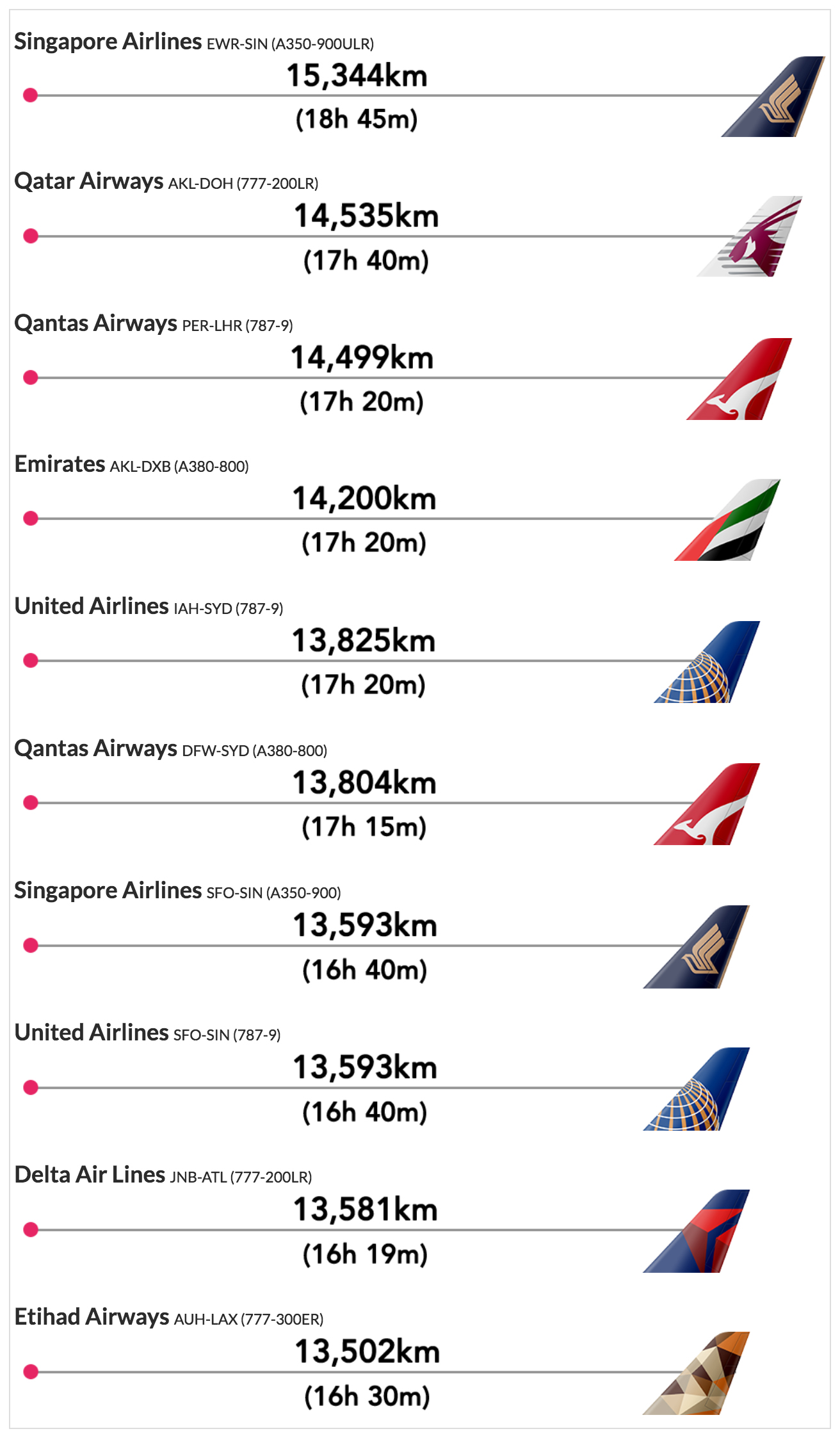 Yes and no is the simple answer. The latest iteration of long-haul jets Qantas will use for these ultra-long range flights aren’t in any way exclusive to one airline – in fact Airbus and Boeing sales teams will be going to great lengths to absorb the research and development costs for this small but important market across as many customers as possible.

For Singapore Airlines, the problem (if you can call it that) is that they have no need for planes flying much further than the current A350-900ULR flies. The only part of the world which lies beyond the current published range of that plane is Central America, The Caribbean and northern parts of South America.

Qantas however needs a ULR aircraft to reach almost all of Europe and the entire eastern seaboard of the USA non-stop from the east coast of Australia – i.e. Sydney and Melbourne.

The ‘ME3’ airlines don’t care

One group of airlines SIA doesn’t have to worry about in the longest flight accolade stakes is the Middle East carriers (often known as the ‘ME3’).

Cash-rich and seemingly constantly ordering brand new planes, the geographical location of these carriers’ hubs serves almost no case for the range of a ULR aircraft.

It makes no sense for these Gulf carriers to sacrifice passenger and cargo loads for fuel by committing to ULR aircraft, only to reach, well… almost nowhere useful.

It’s difficult to see a market for SIA to fly non-stop from Singapore to any cities in South America, having already withdrawn from their sole link to Sao Paulo (via Barcelona) in October 2016, citing poor loads.

This effectively means Singapore Airlines already has a great aircraft in the current A350-900ULR to meet all its needs for ultra-long range links to and from Singapore.

In acknowledging that fact, while reclaiming another world record, it is effectively handing the baton to more physically isolated airlines of the world, like Qantas, to take up the record-breaking non-stop flight challenges of the future.