Skip to content
We took an early preview of Jewel, the latest attraction at Singapore's Changi Airport 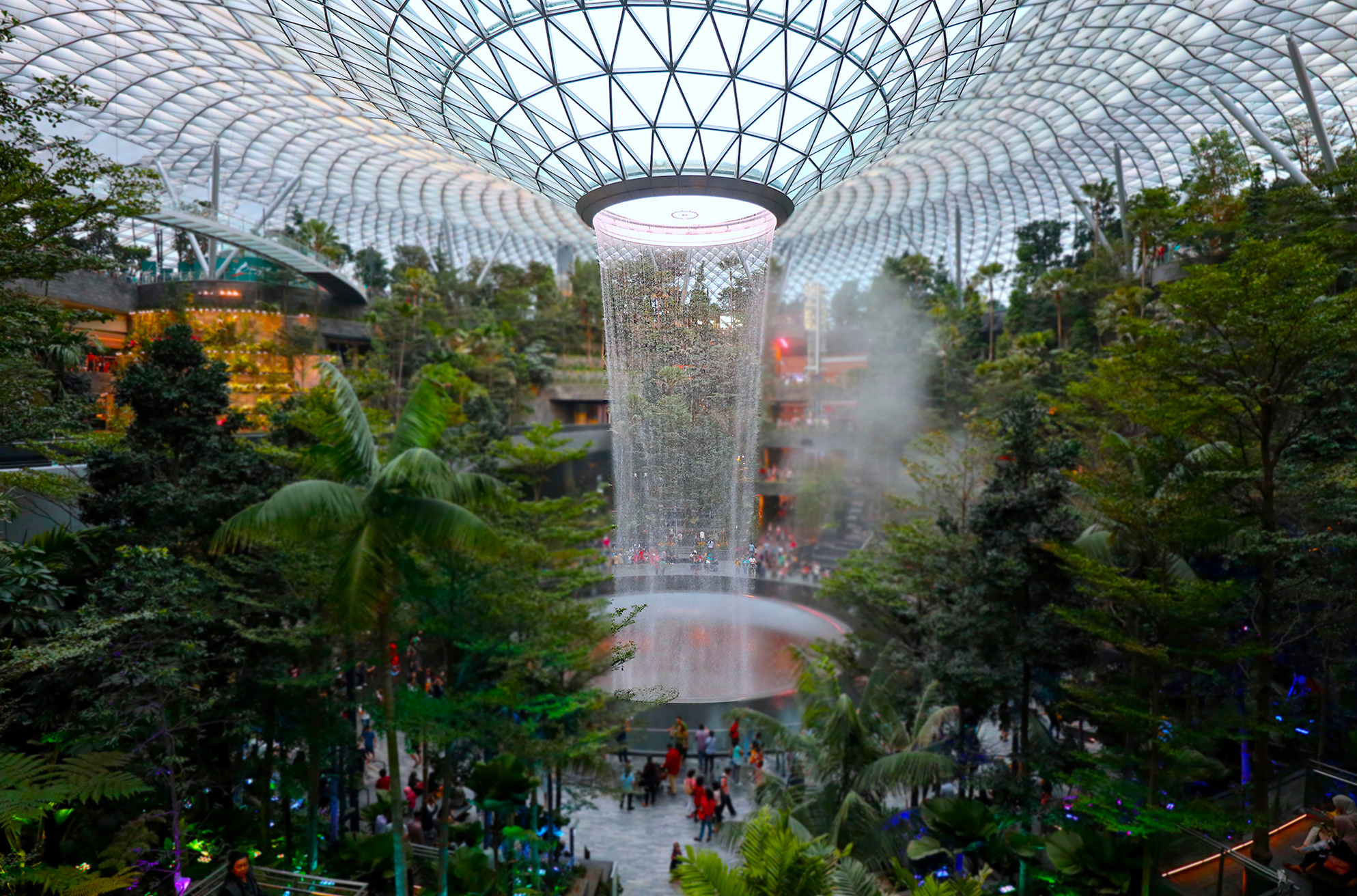 The glistening “Jewel” is the latest addition to the Changi Airport portfolio, coming hot on the heels of Terminal 4 (opened in October 2017). Airport construction is typically a slow and laborious affair but Changi Airport shows no signs of slowing down with a third runway due to open next year and the behemoth Terminal 5, set to be the size of Terminals 1, 2 and 3 combined, scheduled to open in the mid-2030s.

We took the opportunity to check out Jewel on the first public preview day – 11th April 2019. This is not a review as such, given that the facility isn’t fully open to the public yet and so can’t be considered to be in its final state. It should however give you a good idea what you are in for if you visit on or after the full opening next week – from 17th April 2019.

Effectively a large climate controlled indoor garden inside an imposing steel and glass structure sat beneath the iconic control tower, you haven’t been able to miss the Jewel for some time now as you approach Changi Airport by road.

It was designed by Moshe Safdie, Benoy and RSP Architects and is a joint venture between Changi Airport Group and CapitaLand (one of Asia’s largest real estate companies, headquartered in Singapore).

Our (slightly joking) references over the years to Jewel as ‘Ion@Changi’ aren’t totally misplaced here – CapitaLand also developed that mall and its subsidiary CapitaMalls still manages it.

When was it announced?

It’s been a long time coming, “Project Jewel” was first announced in Prime Minister Lee Hsien Loong’s National Day Rally speech in August 2013. Initially, the project attracted a fair amount of criticism, both about the projected cost ($1.5bn) and the point of having yet another mall in the already crowded shopping scene of Singapore.

It’s an airport, right? Not a shopping mall/leisure destination!

Either way, the project marched on despite the criticism. Frankly as much as we dislike the idea of another shopping mall, especially at the airport, this is rather a remarkable building.

How big is it?

This massive steel and glass doughnut-shaped structure is perhaps not as big as it looks – at 137,000m2 (Terminal 4 is Changi’s smallest passenger terminal at 195,000m2). But it spans a total of 10 stories high, five underground and five above.

As anyone who has arrived at Changi Terminal 1 lately will also know, the T1 arrivals area has also been expanded with a larger baggage claim section and a meet and greet area which now links directly into Jewel.

If you’re already at Changi Airport, Jewel is directly accessible by foot from Terminals 1, 2 and 3, but not from Terminal 4 without first taking a shuttle bus.

If you’re arriving at Changi by MRT, once you’ve reached Changi Airport Station (CG2), you can exit either via Terminal 2 or Terminal 3, then access Jewel via the link bridges located at level 2 of either terminal. Exiting via T3 is probably a bit quicker than via T2, as the pedestrian bridge is slightly shorter on that side.

If you’re catching a bus to Changi, all of these services operate to Terminal 1’s basement bus bays, from where you can head to L1 (Arrivals) and follow signs to Jewel. Bus numbers serving Changi are:

Finally, you may have noticed that the Changi Airport SkyTrain passes through Jewel. This is the original T2 > T3 public (landside) service, which had been closed for some time during the Jewel development and is now set to re-open.

It does not stop inside Jewel, so you can get a great view of the new facility, but you can’t get off! That’s a slightly odd decision, we would have thought they would build a station in Jewel itself to allow this, but there are likely sound reasons why this was not done.

After checking in just before our allocated time slot of 7pm on the first preview day, we took a little while to wander around.

Inside it’s a cooled glass dome, reminiscent of the Cloud Dome at the famous “Gardens by the Bay”, located near Singapore Marina. The layers run around the outside of the building and hollow out towards the centre. There are outlets extending below the surface level, down into the basement levels (which is also where you’ll find the car park).

The waterfall, or “Rain Vortex” is certainly a sight to behold. You can’t help but be awed by this 40m tall central feature of Jewel, the world’s tallest indoor waterfall.

After dark, lights, shapes and images are projected into the water flow creating a stunning visual effect. All the visitors on the first public preview evening seemed rather captivated by it, especially the first light show which was shown at 7.30pm.

For a sneak peak of the first light show, take a look at our video below.

There are a number of light shows scheduled from 8.30pm to 12.30am, so if you visit in the evening you’re bound to catch one.

It may be easier to list what isn’t. With over 300 different F&B and retail outlets, a hotel, the world’s tallest indoor waterfall (the ‘HSBC Rain Vortex’ in media speak) and even a cinema, there’s certainly no shortage of things to do here.

We ventured down to B2, the first level above the car park, to start exploring from ‘ground up’.

Here you’ll find the food court, the Shaw cinema featuring IMAX and a Fairprice Finest supermarket. It’s also where the ‘Immersion Garden’ sits at the base of the waterfall.

More dining and shopping outlets, many with a central waterfall view.

The best view of the Rain Vortex waterfall, this is a great place to watch the five nightly light shows running hourly at 8.30pm – 12.30am.

It’s also home to the Shiseido Forest Valley, two walking ‘trails’, East and West, which allow you to climb up the Jewel on foot all the way to Level 5.

The Level 2 viewing deck provides one of the best views of Jewel.

More formal dining outlets and the link bridges to the airport terminals are found here.

The ‘cabin hotel’ – YOTELAIR and the Changi Experience Studio are here, among more food and dining outlets.

Also level 5 has a ‘Dine under the stars’ concept, with “alfresco” mid to high-end drinking and dining options.

The vast array of F&B outlets, quite a few of which will be open 24 hours for late night supper, include: