Skip to content
Singapore's newest hotel is designed for a bit of short term R&R between flights. We checked it out on opening night to see if it fits the bill. 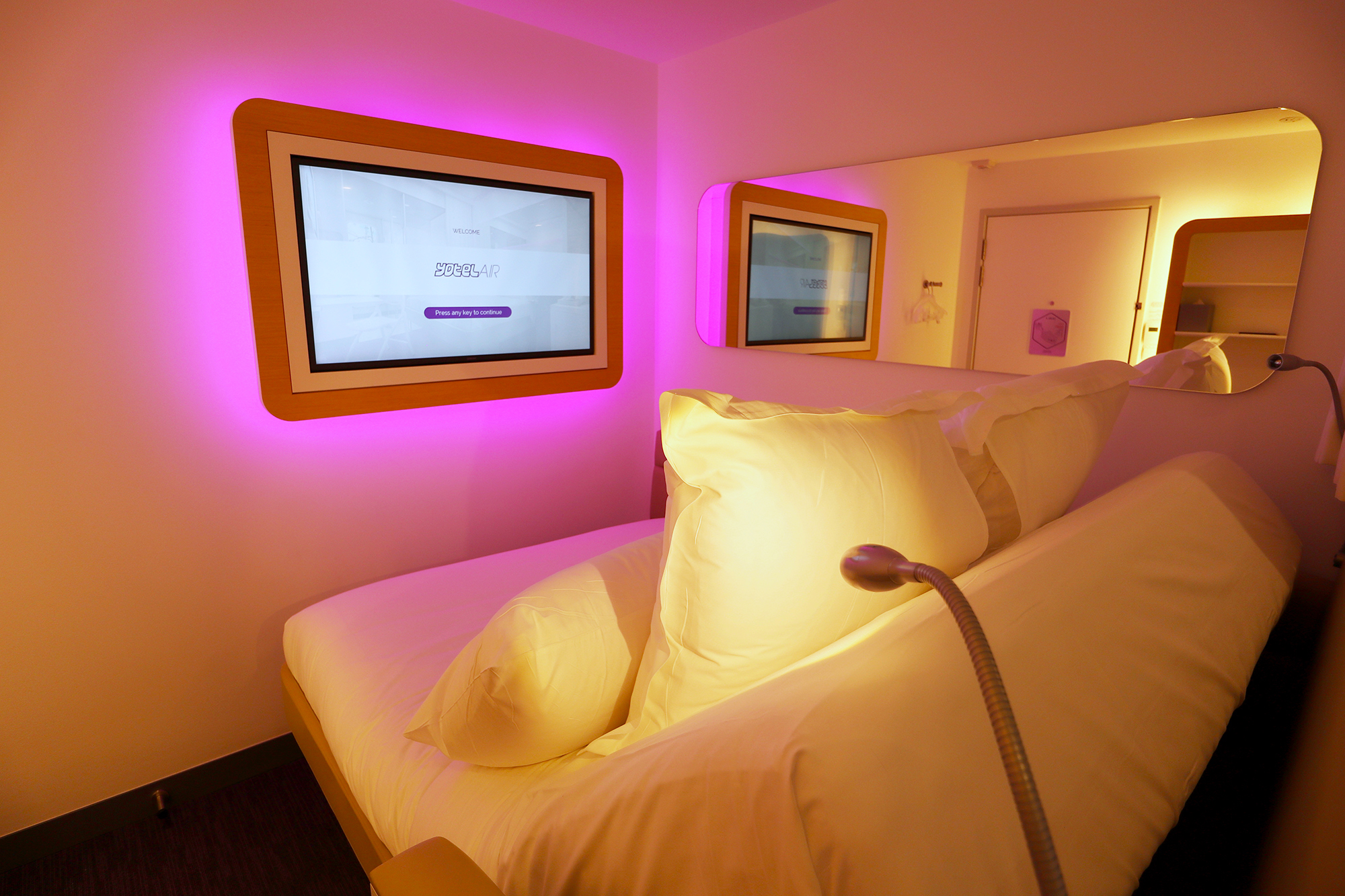 The YOTELAIR at Changi Airport is located in the brand new Jewel complex, centrally located between Terminals 1, 2 and 3.

It is directly above the pedestrian walkway linking Jewel with Terminal 2. Simply take the lift up to Level 4 (the walkway from T2 enters at Level 3), or one of the escalators.

From elsewhere in Jewel, the hotel is well signed so you should have no trouble finding it.

The company rebranded its airport locations as YOTELAIR in July 2016, to differentiate them from those in city centre locations. You can now find these hotels at the following airports:

With the Orchard Road YOTEL opening as the first such property in Asia, the YOTELAIR at Changi Airport is also the first of its kind in the region.

Note: For ease of readability we will not fully capitalise the YOTEL brand name for the remainder of this review.

We had already secured tickets for the first public Jewel preview day on Thursday 11th April. The Yotel was opening the following evening, and any guests staying there prior to the official public opening of Jewel (on 17th April) are automatically entitled to access and use the facility.

We decided that was a good opportunity to review Singapore’s latest hotel on its opening night, also giving us two further preview days to explore the new Jewel facility.

If you haven’t seen it yet, check out our Jewel preview article, which summarises our experience at Changi’s latest attraction.

As you enter the hotel lobby, which Yotel calls ‘Mission Control’, you’ll notice three self check in stations at a central podium.

Whatever time of day or night you’ve booked your room for, these podiums are where they want you to check in and issue your own room key.

We went ahead and tried it out, but unfortunately the self check in system did not recognise our booking.

Luckily there are manned information counters right alongside and the friendly staff were happy to assist, checking us in ‘traditional style’.

There are lifts to the side to take you to the cabins on the second floor of the hotel (201-261), however our room was on the main level.

Corridors are certainly functional but designed with clean lines, modern signage and the brand’s signature purple in the carpet.

We got our hopes up when we arrived outside our room right at the end of one of the corridors, with one of Jewel’s large triangular windows right alongside. Did our room have an outside view?

Alas it did not. Indeed none of the ‘cabins’ in this hotel feature any external windows, so if the idea of this gives you claustrophobia then this isn’t the hotel for you!

The space is certainly used very efficiently here, with the double bed taking up most of the room almost against the wall on two sides. Luggage storage is under the bed, and two clothes hangers are provided on the wall.

At the far side opposite the door a long landscape mirror gives the impression of more space, while the bed itself faces a large flat screen TV. By the entrance are the air conditioning and lighting controls, and on the same side of the room there is a set of narrow storage shelves.

This small area, believe it or not, is also home to your desk. The purple section extends to the horizontal position, so you can work here sitting on the small fold up stool, also provided in a specifically designed recess at the side of the bed.

There were four controls for the room lighting, allowing you to choose between the pink recessed light behind the TV, soft lighting behind the storage shelves, overhead / bathroom lighting and a night light to help you find your way to and from the bathroom at 3am without blinding yourself using ‘full bright’.

If you need an iron and ironing board, these are available on request from reception.

Speaking of glass screens, there is a privacy curtain which pulls across the windows above the bed and the glass door into the bathroom, if required.

The bathroom features a rain head shower in the far corner (yes, it’s a good one), with a conventional shower head option for those who prefer it. Alongside are the toilet and a small sink.