Skip to content
The Standard Chartered X Card brings with it 11 alternative transfer partners. That's where the good news ends. 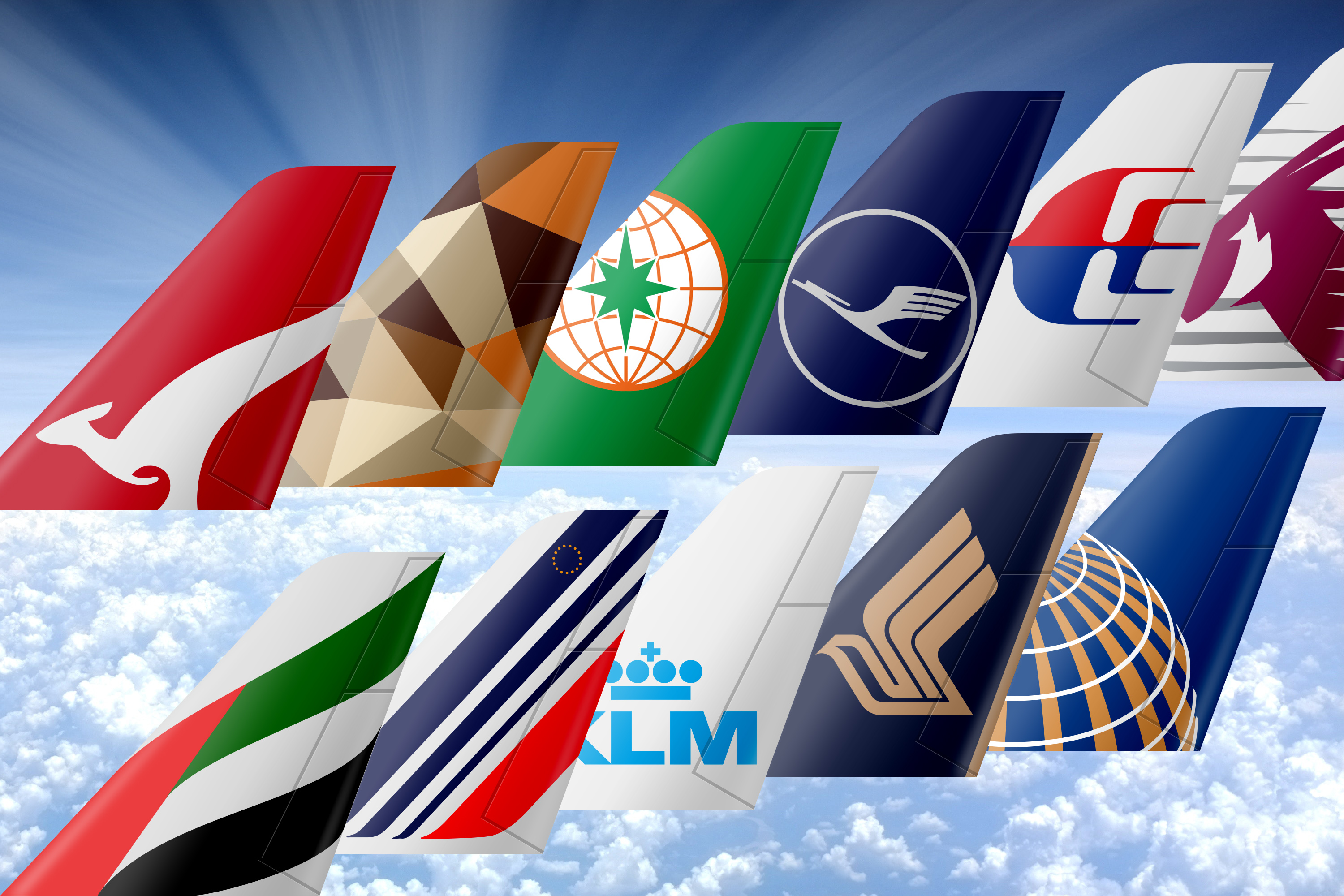 Yesterday we wrote about the 100,000 miles sign-up bonus for the new Standard Chartered Visa Infinite X card, a very generous offer requiring S$6,000 spend in the first 60 days of card membership, subject to payment of the S$695.50 annual fee. Even existing Standard Chartered credit card holders are eligible for the bonus.

One interesting change is that unlike previously, where Standard Chartered 360o Reward Points only transferred into KrisFlyer, we now have confirmation from the bank about the nine additional frequent flyer programmes (FFPs) and two hotel loyalty schemes supporting miles transfer from the X card.

To our surprise, eight additional frequent flyer programmes were revealed to be eligible for miles transfer from 360o Reward Points accrued on the X card (Air France and KLM Flying Blue really counts as just one scheme), for a total of nine including Singapore Airlines KrisFlyer (the only one we were expecting).

On top of that, there were two hotel loyalty schemes. 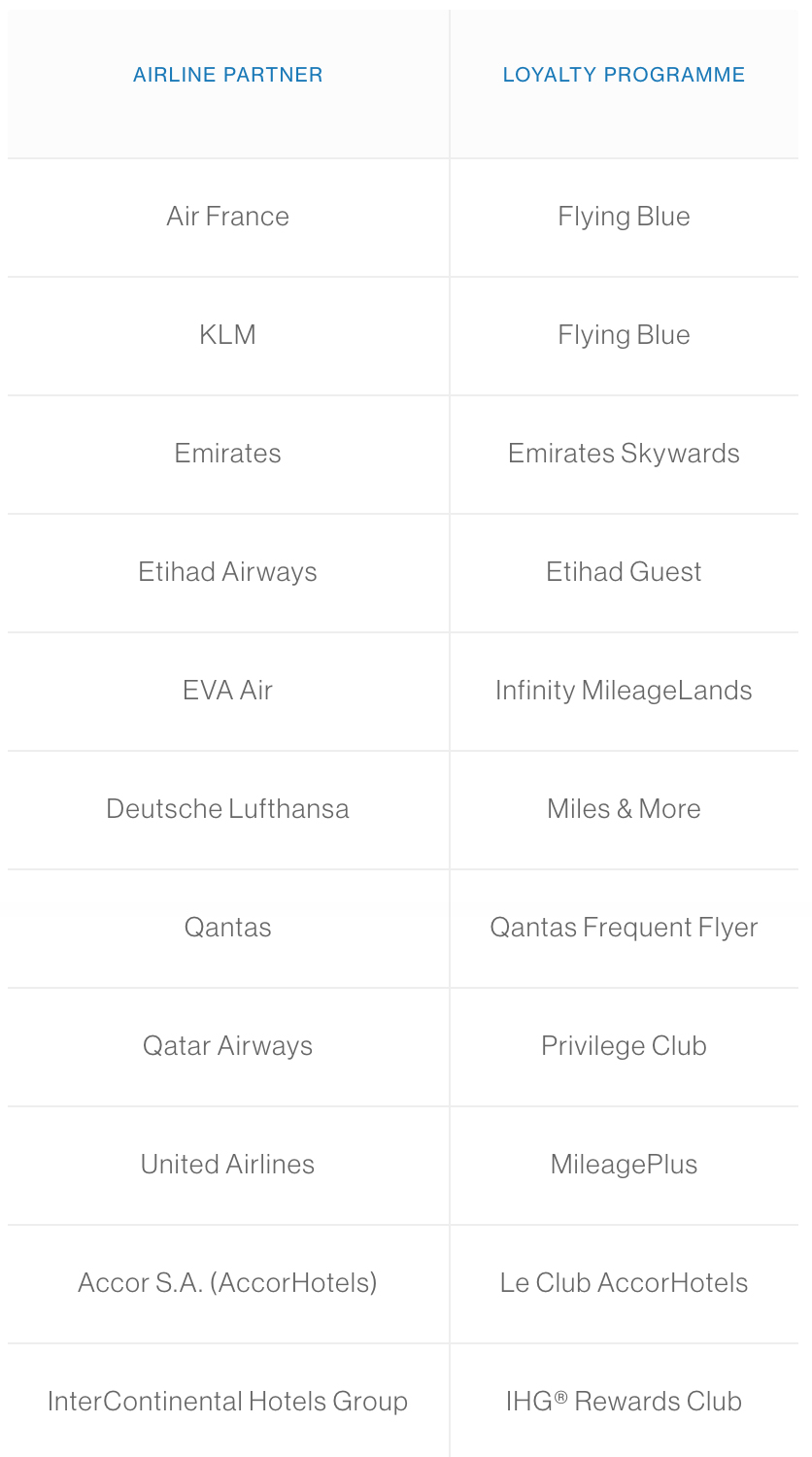 In fact Standard Chartered has confirmed to Mainly Miles that a ninth FFP should also be on the list. Don’t get too excited though, you’ll also be able to convert into Malaysia Airlines Enrich miles.

This is a significant expansion and includes some ‘firsts’ for credit card point transfers in Singapore, those being Lufthansa Miles & More and United MileagePlus.

Five other schemes are only currently available to transfer into from one of the banks in Singapore, those being Flying Blue (Citi), Etihad Guest (Citi), EVA Air (Citi), Qatar Privilege Club (Citi) and Emirates Skywards (American Express).

On the hotel loyalty side, 360o Reward Points will also transfer into Le Club AccorHotels and IHG Rewards Club points.

We couldn’t really comment yesterday on whether this was particularly good news or not without knowing the transfer ratios from 360o Reward Points into miles for X card customers.

We can now reveal those will be as follows, with an example of how many points or miles you will be able to transfer into these schemes with your 100,000 miles (250,000 Reward Points) sign-up bonus.

The good news to begin with is that for Air France / KLM, EVA Air and Qantas Frequent Flyer the regular transfer ratio of 2.5:1 will apply, giving you the same number of miles or points in those schemes as you’d get transferring to KrisFlyer.

For Etihad, Qatar Airways and Malaysia Airlines the 3:1 ratio means you’re taking a hit. You’ll only get 83% of the usual miles in those schemes compared to the total you would get in KrisFlyer. That’s a poor deal with all three of those programmes transferring from Citi at the same rate as KrisFlyer.

Finally Emirates, Lufthansa and United get the poorest ratio of 3.5:1, so you’ll end up with about 71% of the miles or points you would otherwise achieve with a KrisFlyer transfer.

Value is not identical

We consider a KrisFlyer mile to be worth 1.9 cents against Singapore Airlines flight redemptions, but we don’t come to an exact figure for other FFPs and loyalty programmes. For one thing to do so in such detail would take far too long!

Like any programme, each has its own ‘sweet spots’ where you’ll get outsize value, but not all of those will be useful to readers based in Singapore.

To give you an idea, here is what One Mile at a Time and The Points Guy provide as approximate valuations of these miles or points, in Singapore cents (converted from US cents at US$1 to S$1.37 exchange rate at 26th July 2019).

It’s worth mentioning that as with all miles valuations, these are subjective and you might personally use a different valuation, however they provide a reasonable benchmark.

The minimum transfer block for all these partners is 1,000 miles or points in the partner scheme. 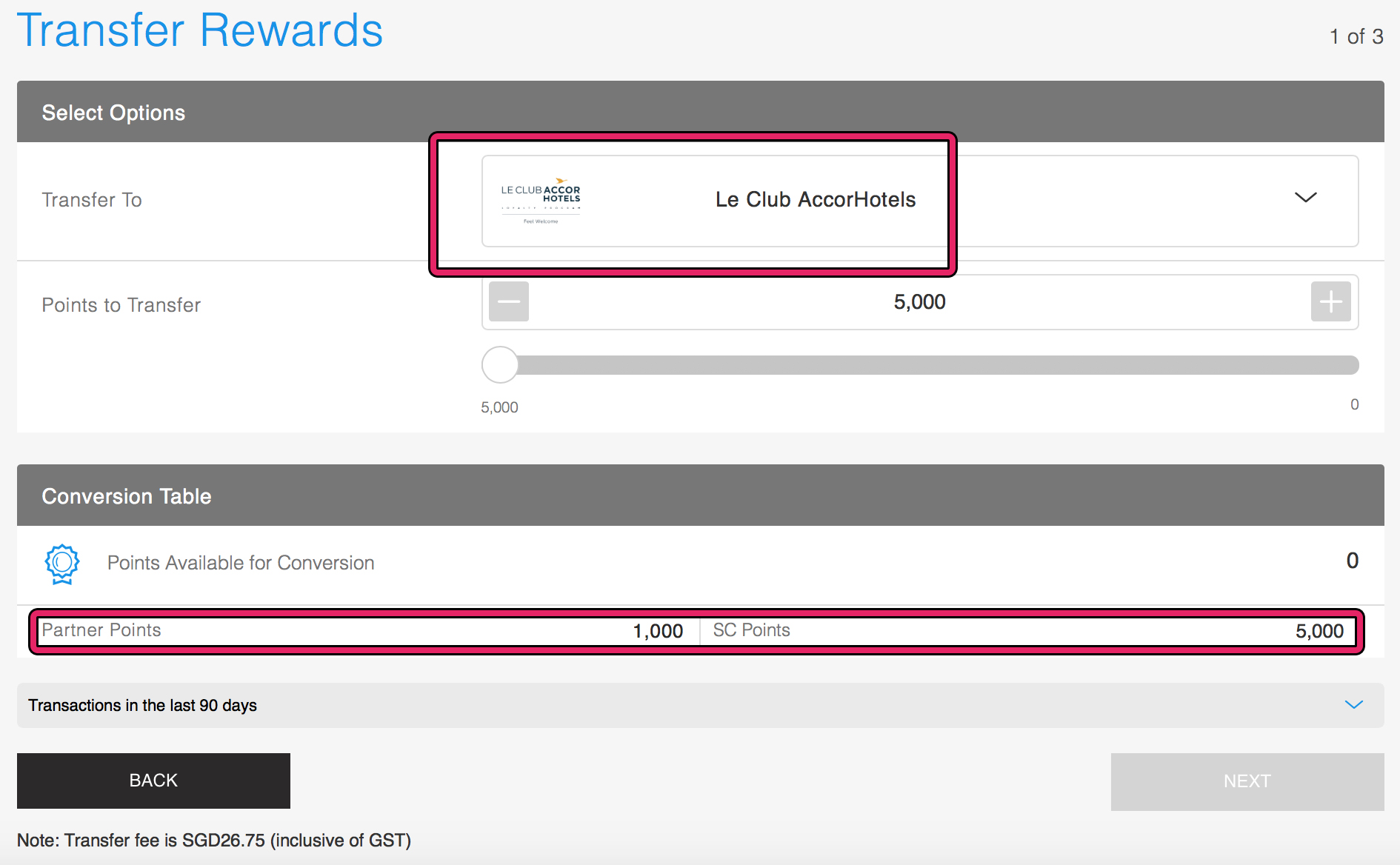 If you’re transferring to a 3.5:1 partner the minimum transfer is 3,500 Reward Points, and so on.

Whether the transfer blocks increase at the same size as you transfer more points we don’t yet know, as I don’t have any points from the X card yet so the system does not allow me to increase the transfer quantity.

Standard Chartered told me the blocks are equally sized (so you can increase in steps of 1,000 miles or points in the partner scheme), and it looks like that should indeed be the case.

I swore blind to Standard Chartered over the phone yesterday that these options are simply not there on the rewards page. I was then told it would happen “soonest”, but eventually got them to tell me what the transfer ratios would be (this was not easy and occupied almost all of my afternoon!).

After all that effort someone called me back and advised that the transfer options are actually there, they are just not found in the same place!

This is a bit cryptic, so follow along carefully.

When you are logged on to your credit cards home page you should see your X Card there. I have a Visa Infinite too so I can see both. Now don’t click on the ‘Rewards’ button, which takes you to the usual place to transfer to KrisFlyer miles.

Your rewards points are shown at the bottom alongside the ‘Redeem Rewards Now’ link. Again don’t press this (like you might think was logical), instead click the ‘Card Details’ button.

There are a few links to Rewards here but scroll down to the very last one ‘View My Rewards’ and click it. 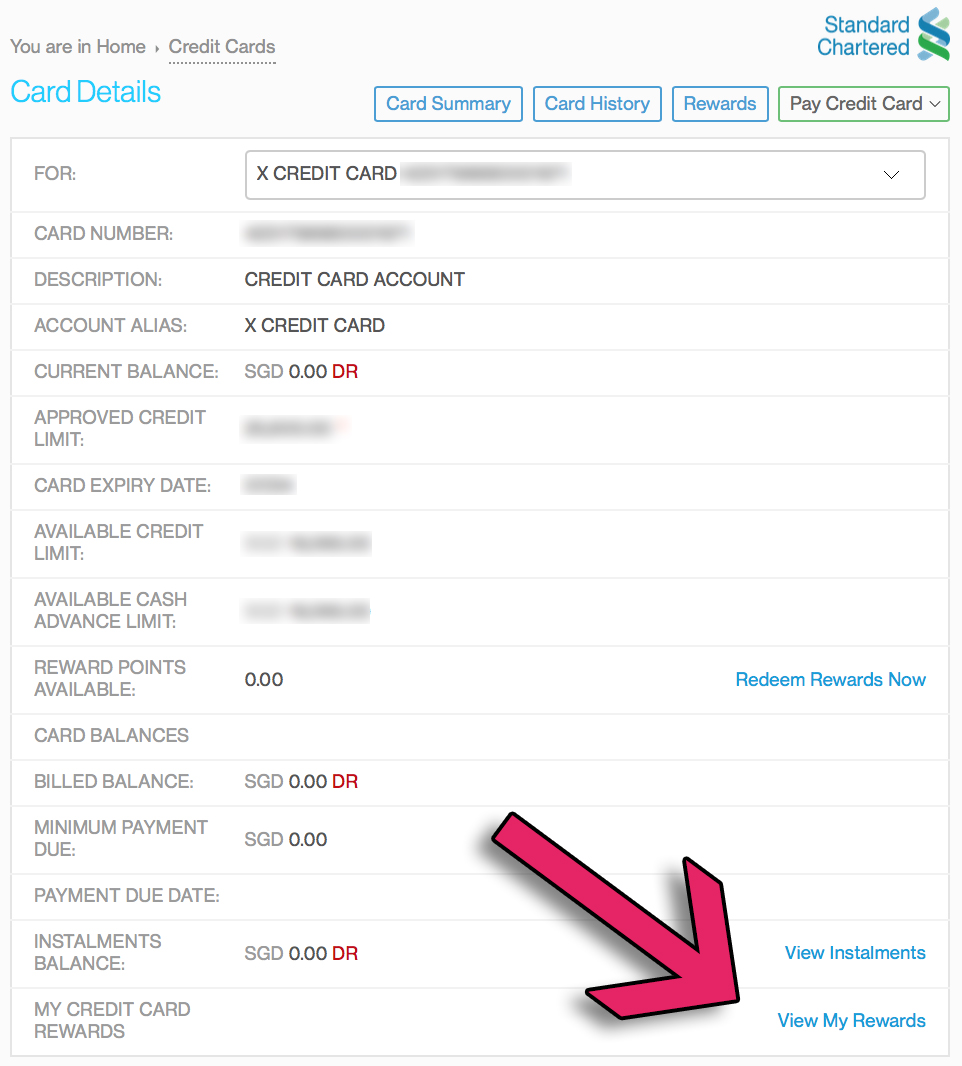 Nothing too interesting on the next page, it just summarises your points balances. Click ‘Transfer Rewards’ (‘Purchase with Rewards’ is the cashback thing).

Read and accept the terms and conditions and voila! 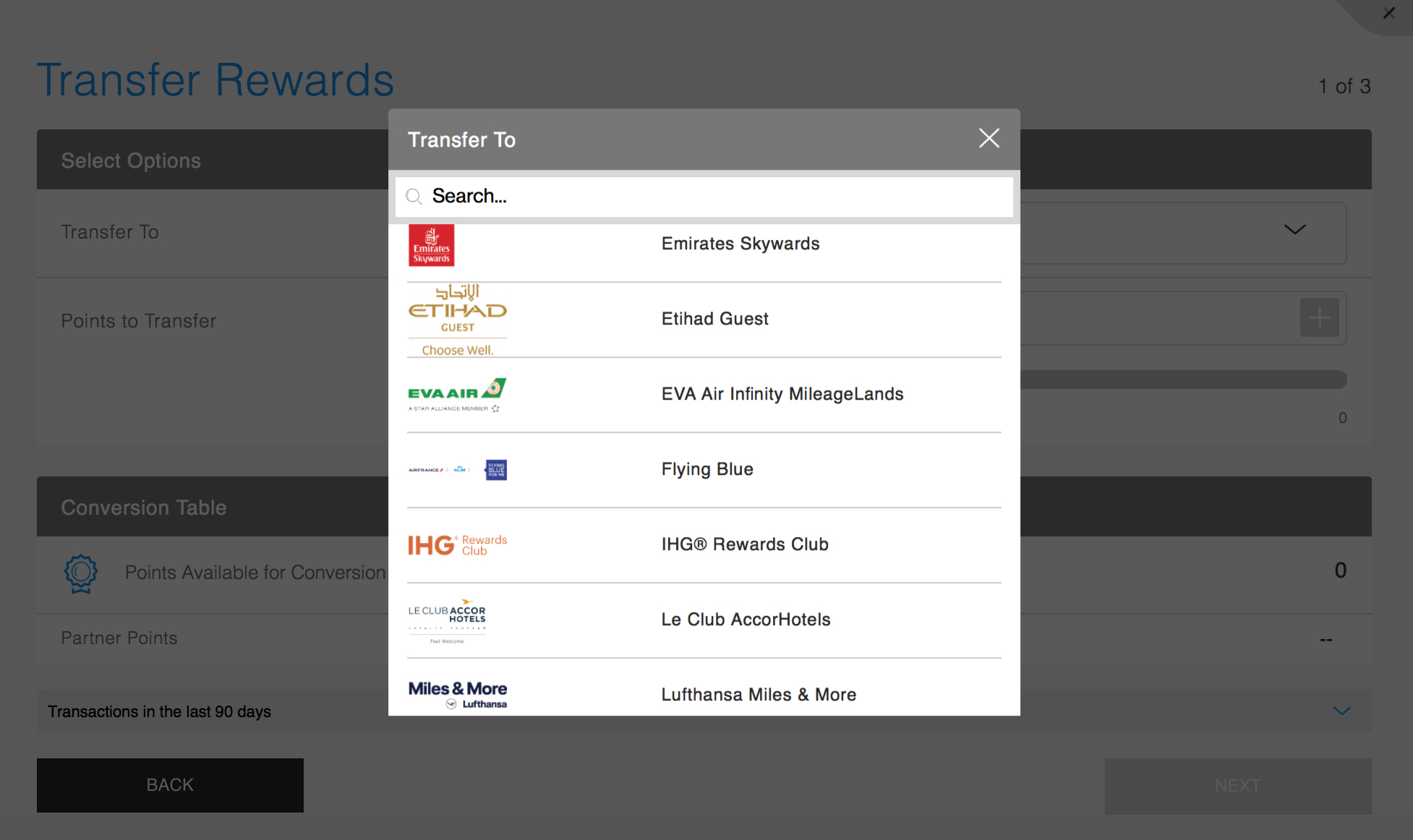 It is not possible to use reward points accrued with another Standard Chartered card, like the Visa Infinite, with these partners, so for now that’s all I can show you since I have no points on the X card yet.

If you want to transfer to KrisFlyer miles you simply use the ‘old’ system, and Standard Chartered told me that there your points from other cards will be combined with the points from the X card so you can make a single transfer from your entire points ‘pool’ to KrisFlyer and only pay the fee once.

I can’t verify that at this stage, but will update once I have some X card points in my account. If you have more than one card and are already seeing some X card points, do let us know if the two are being combined for KrisFlyer transfers.