Skip to content
Ambitious luxury startup airline Starlux of Taiwan should take to the skies in early 2020. Here's a first look at their onboard product. 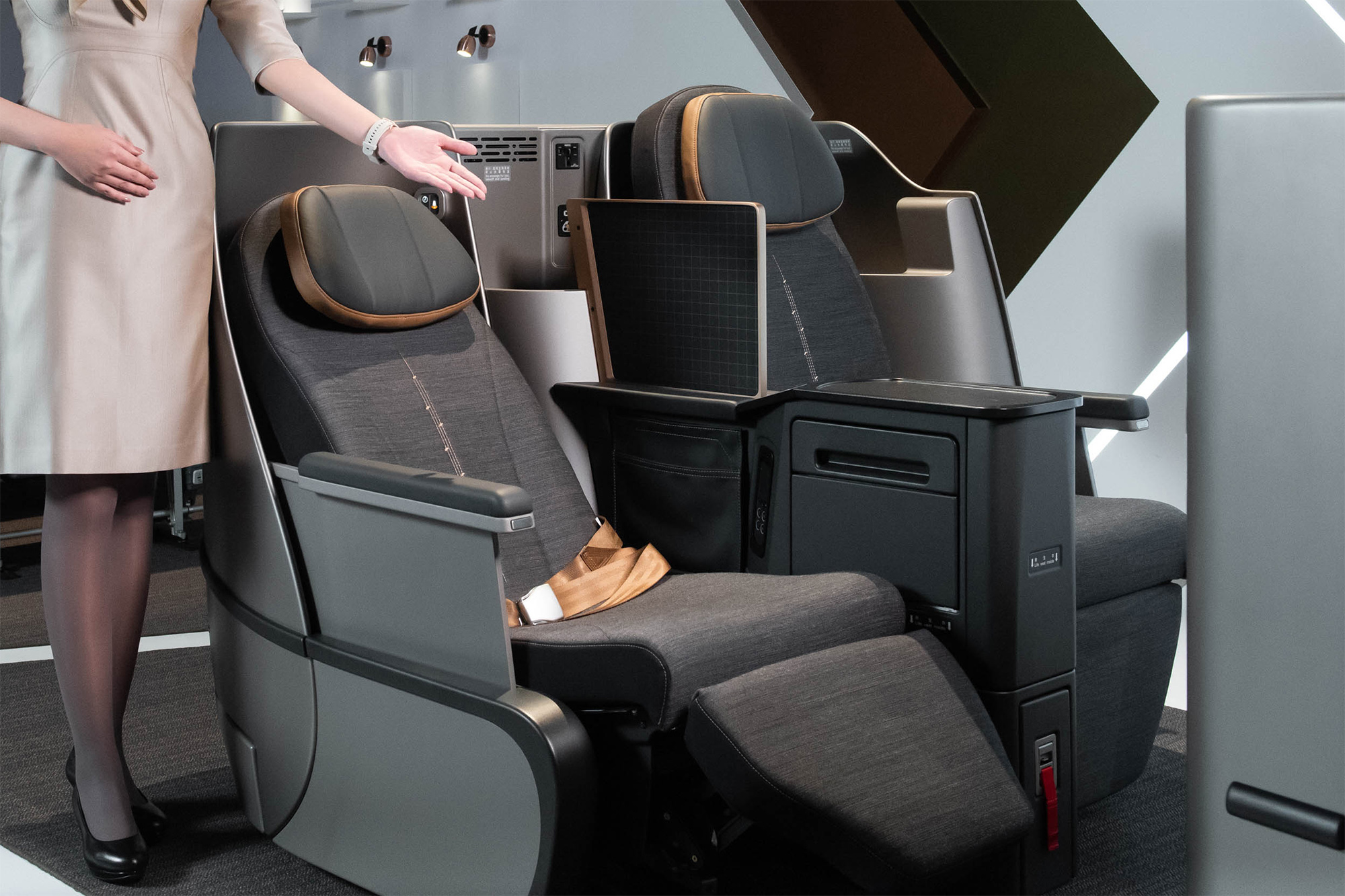 When a new airline sets up in Asia-Pacific these days, more often than not it’s a low cost carrier with the same strategy – Airbus A320 or Boeing 737 family jets deployed into growing markets (or disrupting established ones) to take advantage of what’s been a burgeoning business model in the region for the last decade.

Unusual then to learn of a startup with a full-service business model, one of which is Starlux Airlines, planning to launch services from its Taipei base in January 2020.

Far from a fanciful pipe dream, like many airline startups that never make it to market, Starlux has solid credentials and is headed up by former EVA Air Chairman Chang Kuo-wei.

It will receive its first aircraft this month and, while it is still progressing through the regulatory process to obtain its Air Operators Certificate, it has already secured a range of route approvals in preparation for launch.

Starlux will commence commercial flights using brand new Airbus A321neo aircraft next year, with 10 such models arriving between now and the end of 2021. The first aircraft is due this month, with two more joining the fleet by the end of 2019 for a fleet of three at operational launch in January 2020.

The remaining seven A321neo aircraft will arrive in 2020.

Compare that to the more typical single-class layouts used by low cost carriers on this aircraft type of 230 to 240 passengers, and you can tell straight away Starlux is looking to offer something different.

Plans get a little more exciting from 2021, when the airline aims to introduce the first of five Airbus A350-900s and 12 Airbus A350-1000s to serve long-haul destinations. These should all be delivered by 2024, with the exact configuration and Business Class seat types on those aircraft yet to be disclosed.

Options are held on an additional 10 A350s, which if exercised would bring the A350 fleet to an impressive 27.

Although the chosen premium seat type for its long-haul jets isn’t yet known, the airline has now released details of its Regional Business Class offering on the A321neo jets.

The Collins Aerospace (formerly B/E Aerospace) Diamond Seat is to be used, with a slightly staggered 2-2 configuration which converts into a fully flat bed.

Customisation is by BMW DesignWorks, the same firm responsible for the finish on Singapore Airlines’ Boeing 777-300ER First Class seats.

You may recall our review of KLM’s Boeing 777-300ER Business Class last year – this is effectively the same seat but installed on a narrow body aircraft, with Starlux’s own colour scheme and customer options.

No trendsetter on long-haul routes, however these seats are an impressive choice for narrow body intra-Asia services.

Starlux will become the first Taiwanese airline to offer flat-bed seats on narrow body planes. Seats will convert to 82″ long beds and will be equipped with 15.6″ High Definition 1080p IFE screens. Wi-Fi is also available. 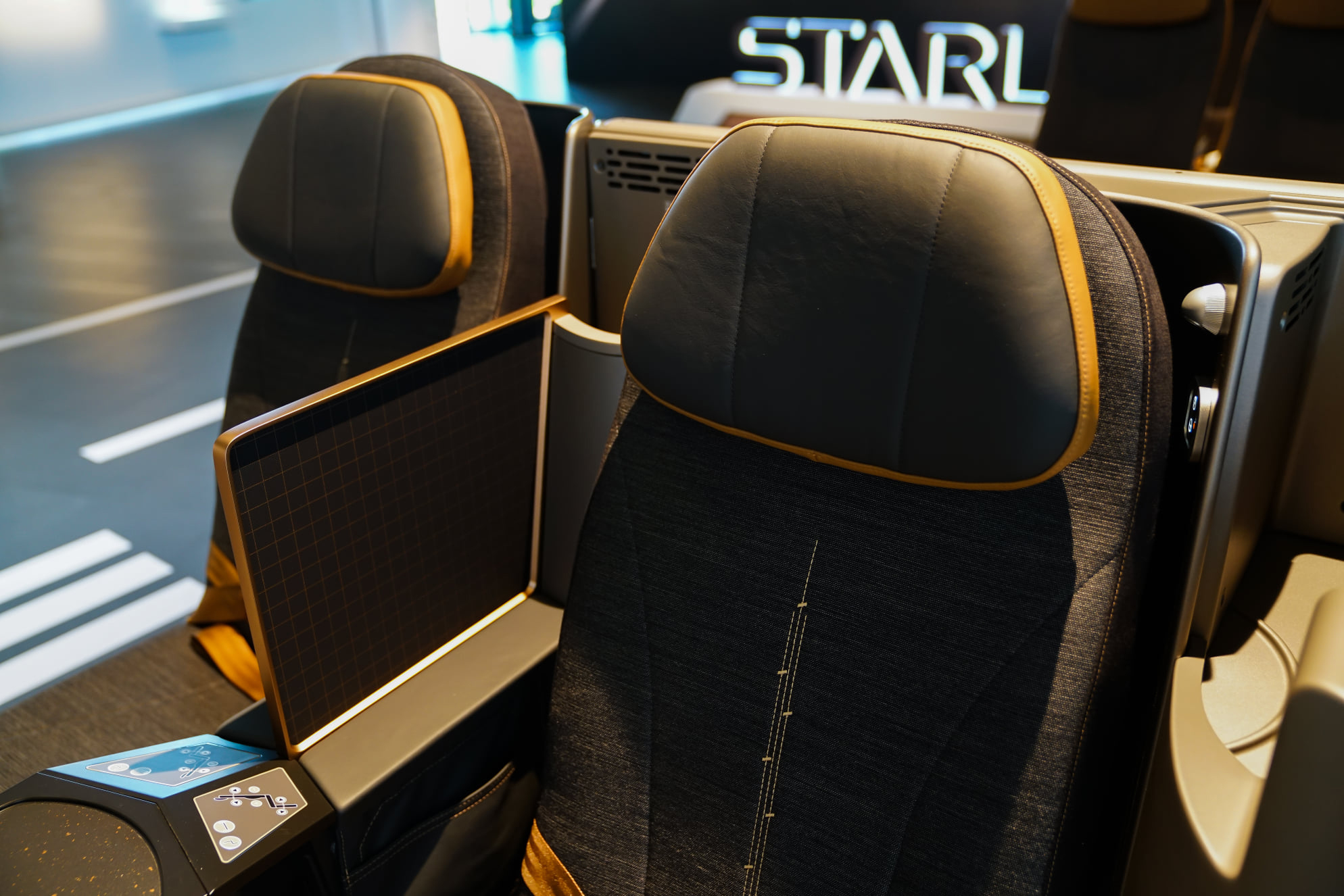 Another airline using the Collins Diamond seat is Business Class airline La Compagnie, with 76 of these seats installed in an all-Business Class configuration on its A321neo aircraft flying between Paris and New York.

The main disadvantage of these seats is the need for window passengers to climb over their seat neighbour to reach the aisle, especially problematic with the seat in bed mode.

This is an irritation, but not totally unexpected in a regional Business Class product.

It will be interesting to see what seats the airline chooses for the A350 Business Class cabin, with a range of off the shelf options available including the Thompson Vantage XL, Safran Cirrus and Collins Super Diamond seat.

Some of these seat types also include the option of a privacy door to create an enclosed ‘suite’, an industry trend which again would be a first for a Taiwanese airline.

Starlux could of course stick with the Collins Diamond seat as fitted on the A321 in a 2-2-2 configuration on the A350, but that wouldn’t represent a very premium layout and would compare poorly against the competition, so we doubt they will do this.

Will Starlux fly to Singapore?

With a business-centric model it’s no surprise Starlux want to link key economic hubs in the region, however those cities haven’t proven possible so far and instead the airline will launch to Da Nang, Macau and Penang on 23rd January 2020.

These are predominantly leisure destinations and almost certainly not what the airline wanted to start with, but we would predict the major target cities including Singapore will eventually be secured.

This will be essential when the airline starts receiving A350s for services to Europe and the US West Coast from 2021, with connecting itineraries between the major Asian and US business centres a solid and growing market the airline will be eager to tap into.

Tickets on the initial routes should go on sale in December this year.

It will be interesting to see how the airline fares against well established competition in the Taiwanese market.

Local full service carriers China Airlines and EVA Air boast extensive route networks and alliance membership, while Cathay Pacific also has a stronghold in the market using Taipei as a focus city with up to 15 daily flights to its Hong Kong hub.

That doesn’t mean Starlux can’t be successful, but it will be an uphill battle to carve a niche in the market and investors will need deep pockets for the first few years if they are to make a success of this one.

One to watch – Starlux certainly bucks the trend with its premium offering, and we’re looking forward to seeing what they install on their long-haul aircraft and reviewing their product and service in future.