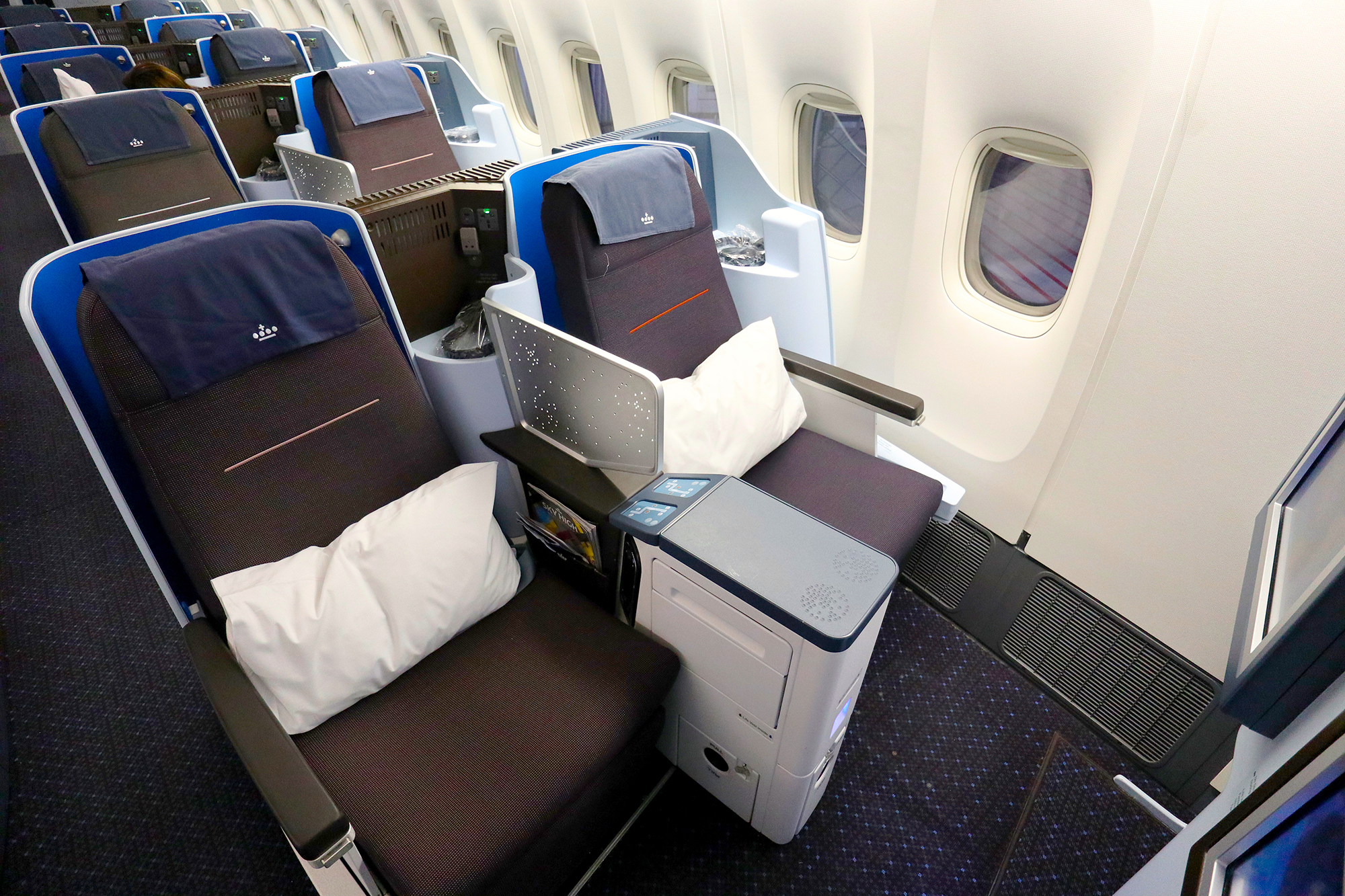 If you follow us on Instagram, you’ll know we never stay away from Bali for long. A few months ago we booked some (very) last minute leave and flew down there from Singapore the same evening, a true ‘spontaneous escape’, for a long weekend to chill out and wind down.

We managed to get a KrisFlyer redemption on Singapore Airlines in Business Class to Bali around 6pm so we could leave after work, but getting back was a bit more problematic. For such a short trip we wanted to maximise our last day, and as usual Singapore Airlines saver redemptions out of Bali on a Sunday were only available on the morning flights.

We almost resigned ourselves to a low-cost Scoot or Jetstar option to head home, though as we searched for prices and departure times an option we’d almost forgotten about popped up – KLM.

It’s probably a bit unnecessary to take a flat-bed long-haul Business Class seat on a 2.5 hour flight, but KLM’s fares are competitive (at about 1/3 of what SIA charge for Business Class on the same route), and finishing off the short trip in style and comfort with the benefit of a full last day in Bali before we went back to work was too good an opportunity to miss.

We were informed at check in of a 45-minute delay to our flight, which gave us a little longer than expected in the Garuda lounge. It’s nothing special, but certainly an improvement on the adjacent Premier Lounge.

We made our way down to the gate at the revised boarding time, however it was still 10 minutes or so before the process actually got underway. A large queue had already formed at the Business Class / Sky Priority side, so we joined the back.

Generally the process was quite chaotic at the small gate area for such a busy flight, with lots of confusion among passengers about which queue to join and many passengers repeatedly approaching the agent desk with questions.

The forward section accommodates 28 passengers across five rows (four rows on the far right hand side), while a single-row cabin behind the second main aircraft doors and directly ahead of Economy Class has a further six seats, for a total of 34 Business Class passengers.

All rows have a 2-2-2 configuration, meaning 23 of the 34 seats have direct aisle access with only the passengers in one of the 11 window seats having to step over another passenger to access the aisle.

This is a vast improvement on the former 2-3-2 layout KLM offered in this cabin, in which 15 of the 35 passengers did not have direct aisle access including five in the dreaded ‘middle seats’. That configuration has thankfully now been phased out on all KLM 777s.

Rows 1 and 6, the bulkhead positions, feature much larger footrest areas than the other seats. These are really worth going for if you’re flying on this aircraft. As usual, ignore the useless SeatGuru (can’t even bring ourselves to link it), which even states that floor storage for takeoff and landing is not available at these rows (we can attest that it certainly is available!).

Incidentally if that route is any use to you, it’s probably one of the cheapest ways to experience this (or any) long-haul flat-bed Business Class product in the region – S$177 in March for the 2-hour hop one-way from KL to Jakarta or S$366 for a return itinerary.

That’s around half what Singapore Airlines charge for an Economy Class round-trip flight from Singapore to Jakarta!

We were welcomed on board the aircraft by the cabin crew and directed down the left aisle to our seats 1A and 1C.

The crew brought round welcome drinks, and we both opted for a glass of Champagne (trying to forget that we were both back at work in 12 hours time).

On the large central armrest between the two seats there is an in-built bevelled portion designed to serve as a drinks coaster to prevent your glass from slipping. We doubt it would stand up to heavier turbulence, but for the most part it does its job.

Already the small touches are apparent – the bevelled glasses are beautiful. KLM serves a non-vintage Nicolas Feuillatte Réserve Brut Champagne, which picks up 3.8 stars out of 5 on Vivino.

In our experience you don’t see Nicolas Feuillatte much in Asia, however having both lived in London we know this one is available in UK supermarkets at around the £30 (S$53) mark, with the cheaper non-reserve version quite widely available for around £20 (S$36). In Singapore you’re looking at about S$80 for the reserve from a wholesaler.

The crew also came round with an amenity kit, quite a surprise for a 2-hour flight. We’ll take a look at that later in the review.

The only difference between this and a long-haul flight, like Singapore to Amsterdam, is that no blanket is provided on boarding. We forgot to ask the crew, but it’s likely they will provide one on request even on this short flight.

Edit 9th March 2019: Apparently blankets are not available on the SIN-DPS or DPS-SIN sectors on this flight, only the longer flights to/from Amsterdam. Thanks to PlaneSimple in the comments section for the heads-up.

The seats are staggered from one another by a few inches, improving privacy if you don’t know your neighbour.

There is also a small fixed privacy divider, with some decorative holes presumably to make it look less industrial.

Even though the seat positions are staggered slightly, the IFE screen is not, affording the passenger in the aisle seat of a window pair (or the ‘D’ seat in a middle pair) some additional space.

If you’re flying on one of KLM’s new Boeing 787-9 aircraft, these have a different seat product – the Zodiac Cirrus in a 1-2-1 configuration.

Though these don’t currently fly from Singapore, you can find them flying on KLM’s flights from Osaka, Beijing, Chengdu and Hangzhou, plus on a range of transatlantic flights from Amsterdam.

We recommend trying to secure a bulkhead position in this cabin, which means a seat in either row 1 or row 6. That’s because there is significantly more foot space at the cubby hole for your feet, since it doesn’t have to make way for another seat in front. This especially improves comfort on longer flights when you’ll be using the seat in bed mode.

The foot area is almost the same width as the seat itself at these bulkhead rows.

The only downside with rows 1 and 6 is proximity to the galley and toilets at these locations.

These seats aren’t hugely generous with additional storage. Below the IFE screen there is a shelf for personal devices, or potentially magazines and newspapers. Here’s how in iPhone 8 looks inside that area.