Skip to content
If you're just short of a redemption threshold for your Standard Chartered to KrisFlyer miles conversion, you can top up the difference for 2 cents a mile 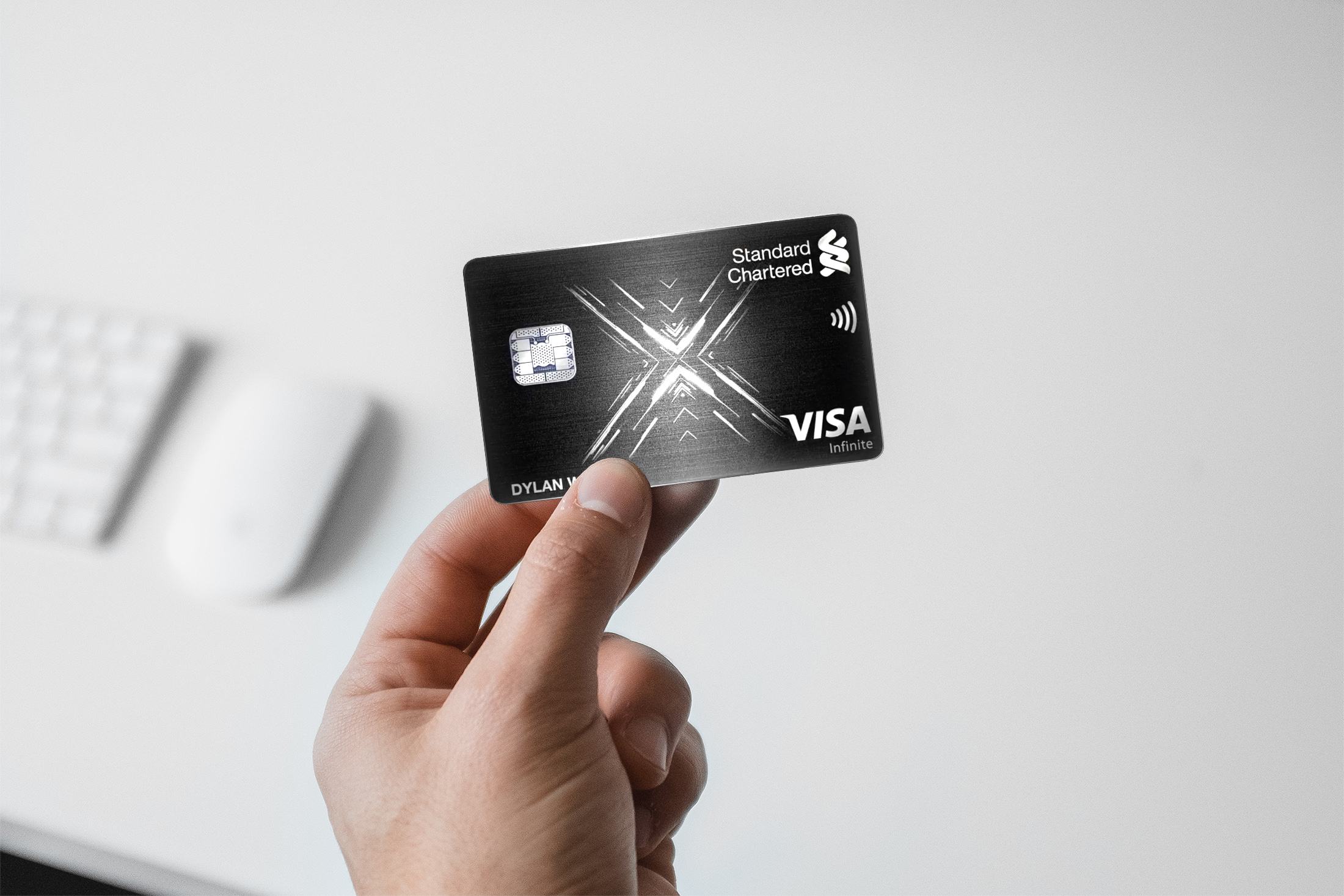 A few weeks ago we were writing about the ability to ‘buy’ unlimited KrisFlyer miles through your UOB PRVI Miles card for 1.9 cents each, a temporary discount until the end of the year, coming in nicely below the other credit card option – OCBC Voyage’s 1.95 cents per mile rate.

Standard Chartered has added an interesting option recently if you’re looking to convert your reward points from their Visa Infinite, X card or Rewards+ card to KrisFlyer miles – a flat rate of 2 cents per mile should you wish to transfer more than you would otherwise be able to.

Apart from the relatively high cost (we value KrisFlyer miles at 1.9 cents each), the snag with this method is that you must have at least 30% of the desired points transfer total in order to pay to top up (though you likely won’t want to be paying to top up by 70% at this purchase rate!).

Since you can transfer up to 3.33 times the number of points you actually have in your rewards account by paying extra, you can potentially take this top up to quite a ludicrous extreme, depending on your current rewards balance. 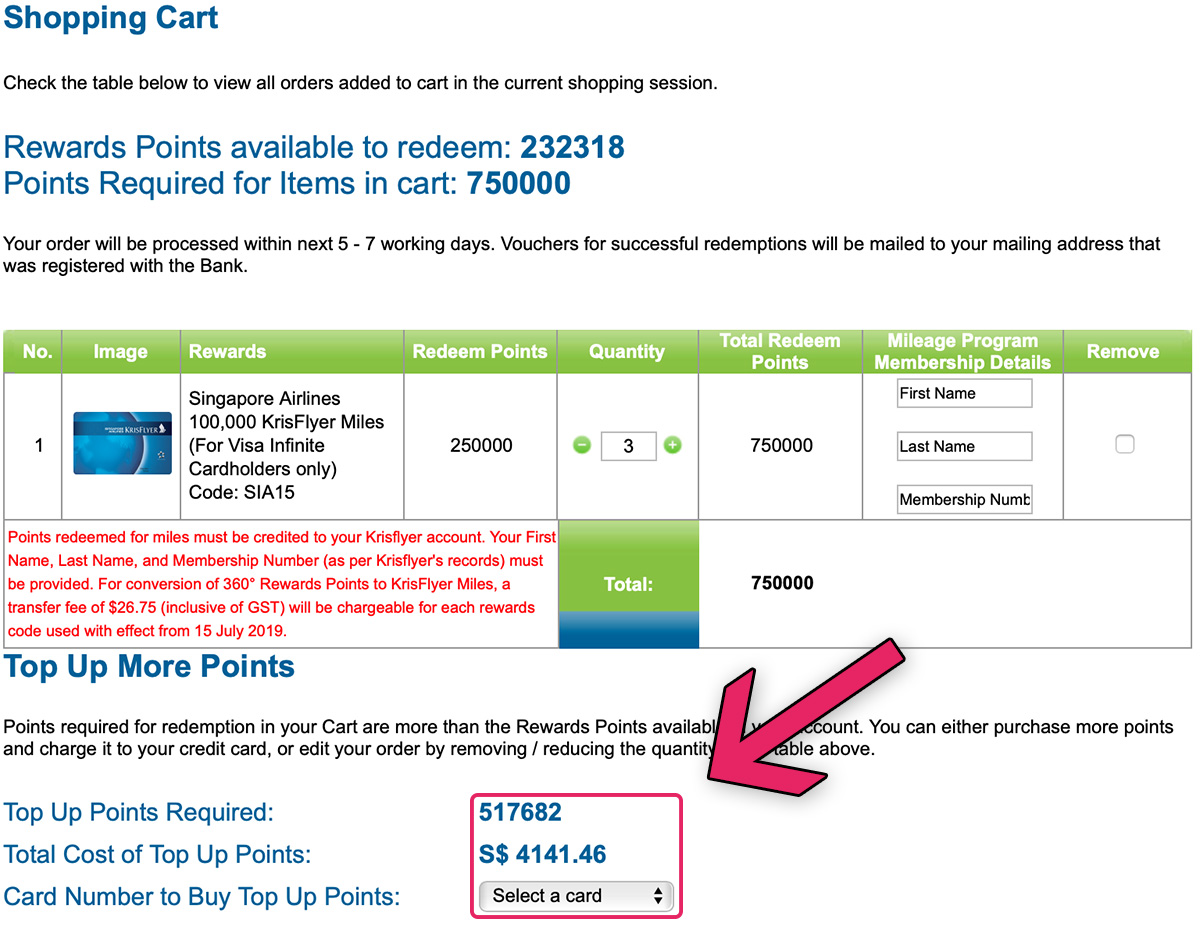 As you can see in my situation I can top up my 232,000 balance (good for around 92,000 KrisFlyer miles) by well over half a million Standard Chartered points to achieve a transfer of 300,000 KrisFlyer miles instead, at an additional cost of over S$4,000!

That’s crazy when there are far cheaper ways to accrue miles than paying 2 cents each for them, but you can’t fault its simplicity – you don’t need to have a bill to pay like you do with CardUp or ipaymy, and there are no forms to fill out like with UOB. In a couple of days (typically), these miles can be credited into your KrisFlyer account.

2 cents per mile is also not unheard of – OCBC used to offer a S$10,000 annual fee option for its Voyage Visa Infinite card for a 500,000 KrisFlyer miles sign-up bonus, the same effective purchase rate of 2 cents per mile.

The bank is now allowing this, by selling you the extra points for 0.8 cents each. Since you need 2.5 points for every KrisFlyer mile, it works out as 0.8 x 2.5 = 2 cents per mile of additional cost. 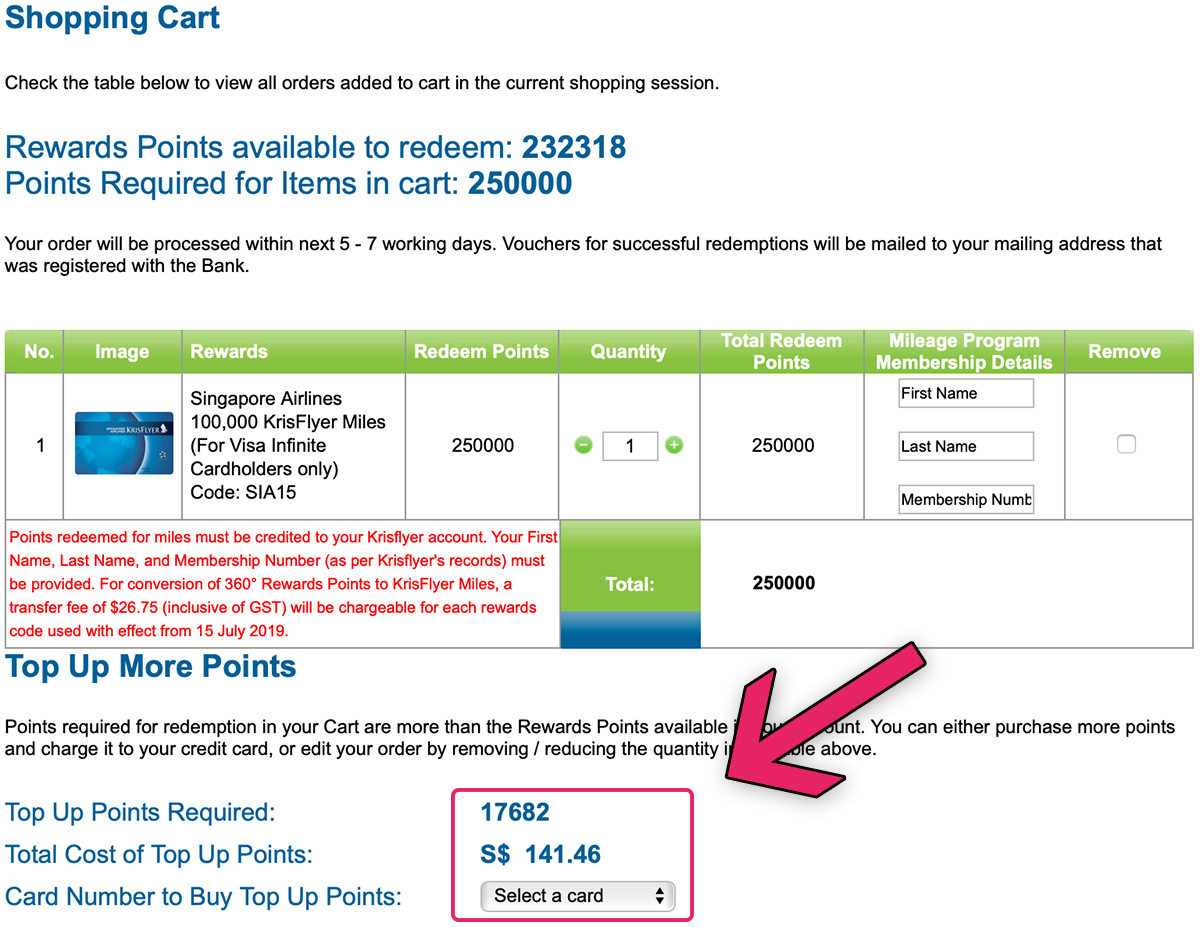 The site will ask you to select which Standard Chartered card you wish to use to pay for the points top up, if you have more than one card with the bank. A couple of things to note here:

Is it worth it?

Actually this isn’t something I would do, as my KrisFlyer balance is healthy enough without having to top up at 2 cents per mile.

It might make sense for some people though, particularly if you’re in painfully close proximity to the next transfer threshold, and that means the difference between locking in a redemption or not having enough miles in your account to do so.

You might also consider that an available KrisFlyer redemption you didn’t expect to achieve is worth paying the extra 2 cents per mile for (like the recent splurge of saver awards in new Suites to London), but tread very carefully here.

Standard Chartered rewards points to KrisFlyer conversions take at least 2 days in our recent experience, so the award flight you’re looking at could easily be gone by the time the miles are credited.

We would only consider this option if we had already called Singapore Airlines and put the award seats on hold while the miles transfer took place.

Since you will attract the S$26.75 transfer fee charge for each of the blocks used, it’s better to add multiple numbers of the same block size. For example if you have accrued 325,000 points that should give you 130,000 miles. 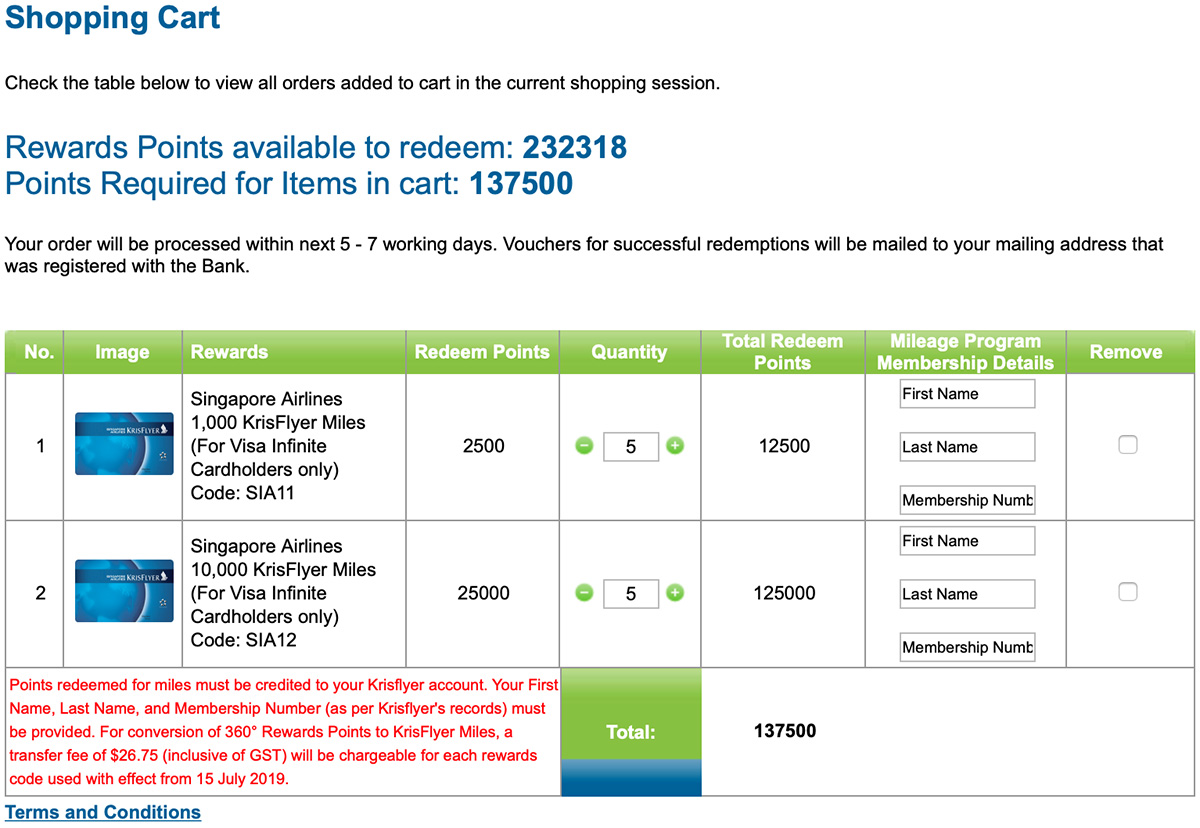 Yes it’s stupid, but in this above example I will be charged S$53.50 (S$26.75 x 2) because I have included miles transfers under two different rewards codes. Don’t make that mistake.

If you’re cashing out completely, it’s worth considering

As you can see with my balance of just over 232,000 points, the highest and most efficient KrisFlyer transfer I can make is 92 of the smallest transfer block, for a single S$26.75 fee.

However let’s say I’m no longer going to use my Standard Chartered cards and I wish to cash out of the scheme completely. Many of our readers are eager to do just that, following the X card sign-up promotion.

The most efficient way to do this is instead transfer 93 of the smallest batch, for 93,000 KrisFlyer miles, and pay the small top-up difference. This will completely wipe out my Standard Chartered points balance, so there are no leftover points when I cancel. 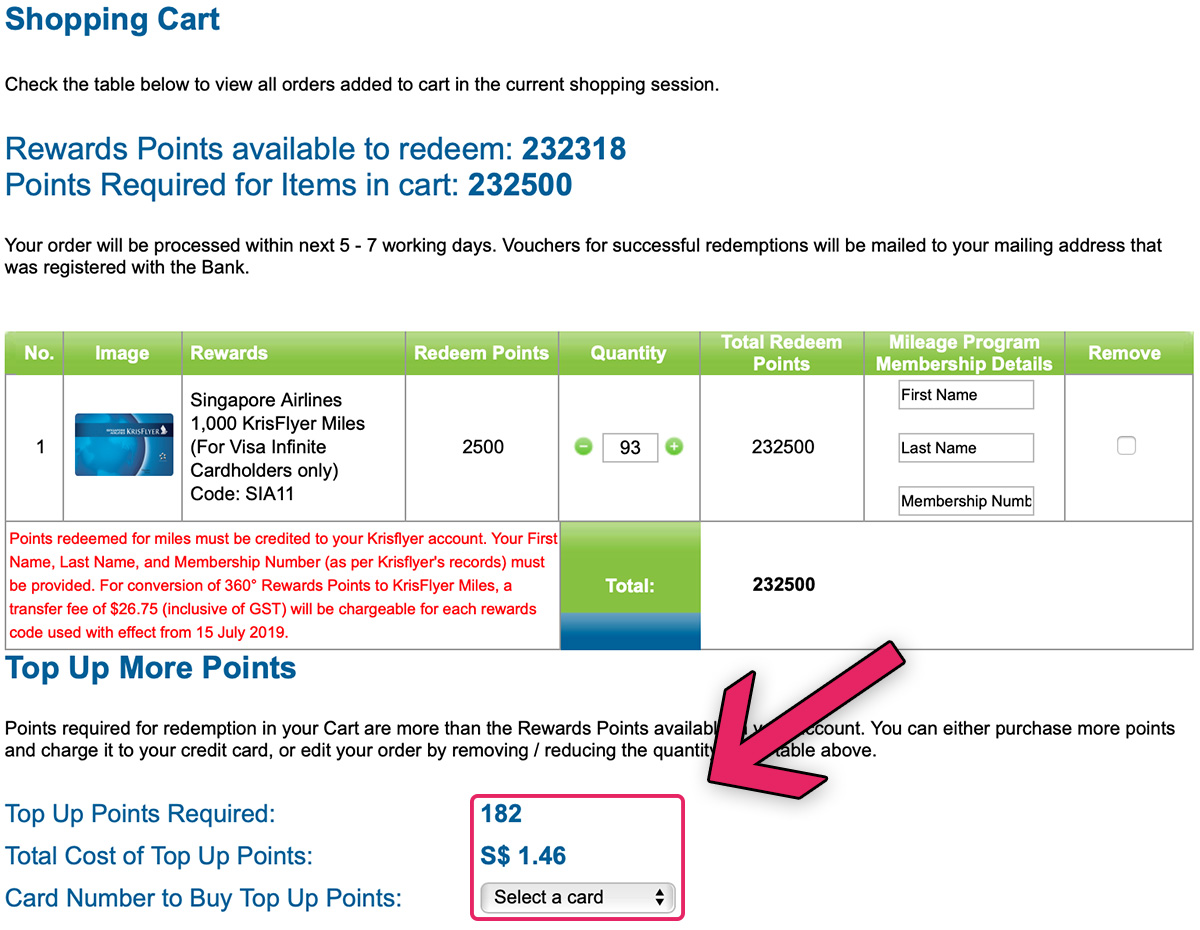 Since I am already so close to the next threshold, this is the equivalent of paying 0.15 cents per mile for those last 1,000 KrisFlyer miles, clearly worth doing if the remaining points balance will otherwise go to waste in an account cancellation scenario.

Don’t be confused by the valuation there though – it only applies if you will not accrue any Standard Chartered points in future. If like me you will actually continue to accrue miles in the programme, the cost is still 2 cents per mile, which is too steep for me.

Top ups are not supported for 11 new loyalty partners

In case you’re wondering whether you can also apply this paid top up for Standard Chartered’s 11 new loyalty partners, which came about when the X card was launched and have since been unlocked for all the bank’s miles cardholders, it’s bad news.

The top up option is only applicable to using your Standard Chartered Rewards points for KrisFlyer transfers. 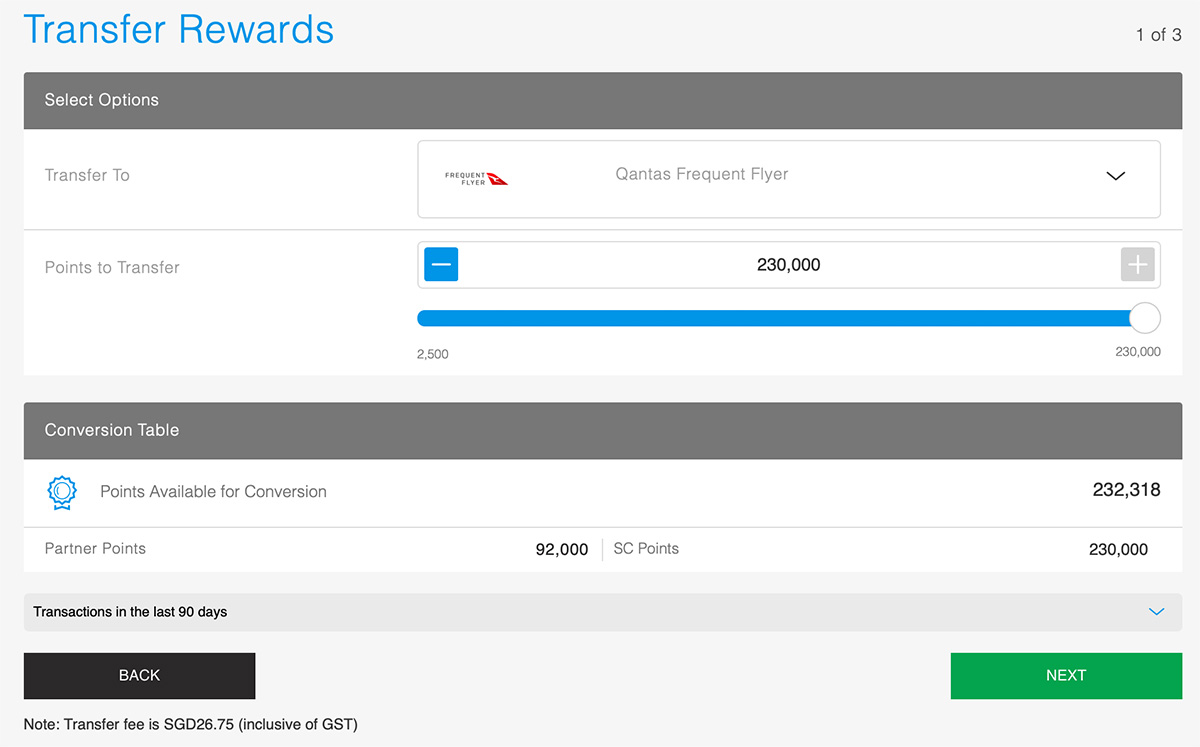 You’re still stuck with the ‘sliding scale’ for transfers to other FFPs, which is limited by your rewards points balance.

Any Standard Chartered credit card customer with a Visa Infinite, X card or Rewards+ card can now more than triple their points transfer total into KrisFlyer.

The drawback? This comes at a cost of 2 cents per mile. That’s above what we typically endorse (1.9 cents per mile), but that doesn’t mean there are no reasons to consider it.

Those close (but not quite close enough) to a points quantity for a specific redemption they have in mind may see the value and simplicity in the option.

Anyone wanting to cash out of the Standard Chartered rewards programme, for example having met the spend threshold for the X card but now using better miles earning cards and intending to cancel, will almost certainly want to consider topping up to the next transfer threshold.

This will always come in at a cost of less than 2 cents per mile in that example, as otherwise the unused points would simply be forfeited, so you are now using some of those points to ‘dilute’ the purchase rate.