Skip to content
Staggered 1-2-1 seating will feature 'couple' middle seat pairs at alternate rows on the Boeing 787-10, while only 8 of the 36 seats are likely to have the highest level of privacy. 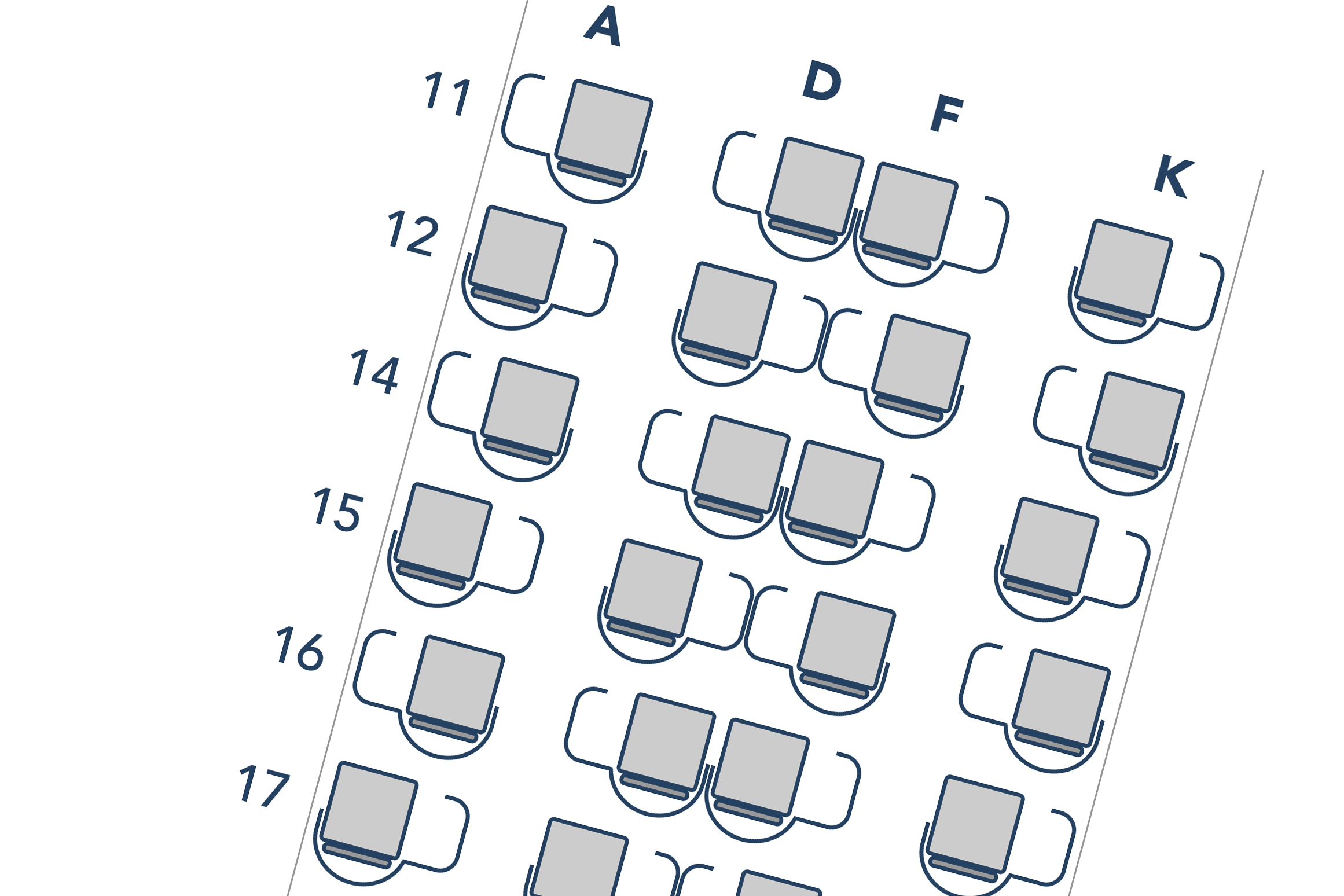 Singapore Airlines are remaining tight-lipped about the new regional business class product to be introduced on their Boeing 787-10, which will be delivered about a month from now and enter service on 3rd April between Singapore and Bangkok.

We’ve had a little snippet of information though, and that’s the more specific layout of the business class seats – over and above the fairly basic seat map the airline has already published.

Singapore Airlines released a seat map for their upcoming 787-10 business class cabin to the Global Distribution System (GDS), not normally very exciting as this information does not detail the exact seating arrangement and is used mainly by travel agents and reservations / check-in staff, but some interesting information was added which we think has given the game away on the actual layout – disabled access seats.

We first noticed this on ExpertFlyer, which shows the following seat layout, now with disabled access seats additionally marked as shown.

Seats marked as suitable for disabled passengers must have unhindered aisle access, and that means the ones closest to (and most exposed to) the aisle in a staggered 1-2-1 layout are marked this way.

That’s fine, you might say, we’ve basically known for some time and remain 90% certain from the Australian Business Traveller leak in October last year that the new regional business class will use the Stelia Aerospace ‘Opal’ seat in a staggered 1-2-1 layout, which means some seats will be nearer the window while others will sit closer to the aisle.

What we didn’t know, until now, is how the airline would configure the middle seats.

The fact that the middle seat pairs alternate between disabled access and regular seats row-by-row, leads us to conclude that couple seats alternate in the middle with solo aisle seats in each subsequent row (the latter being suitable for disabled passengers).

Here’s how we think it will look. Do note that the graphic is not to scale or anything clever like that, and we don’t know that the window and middle rows are exactly aligned (they probably aren’t); it’s just our approximation. 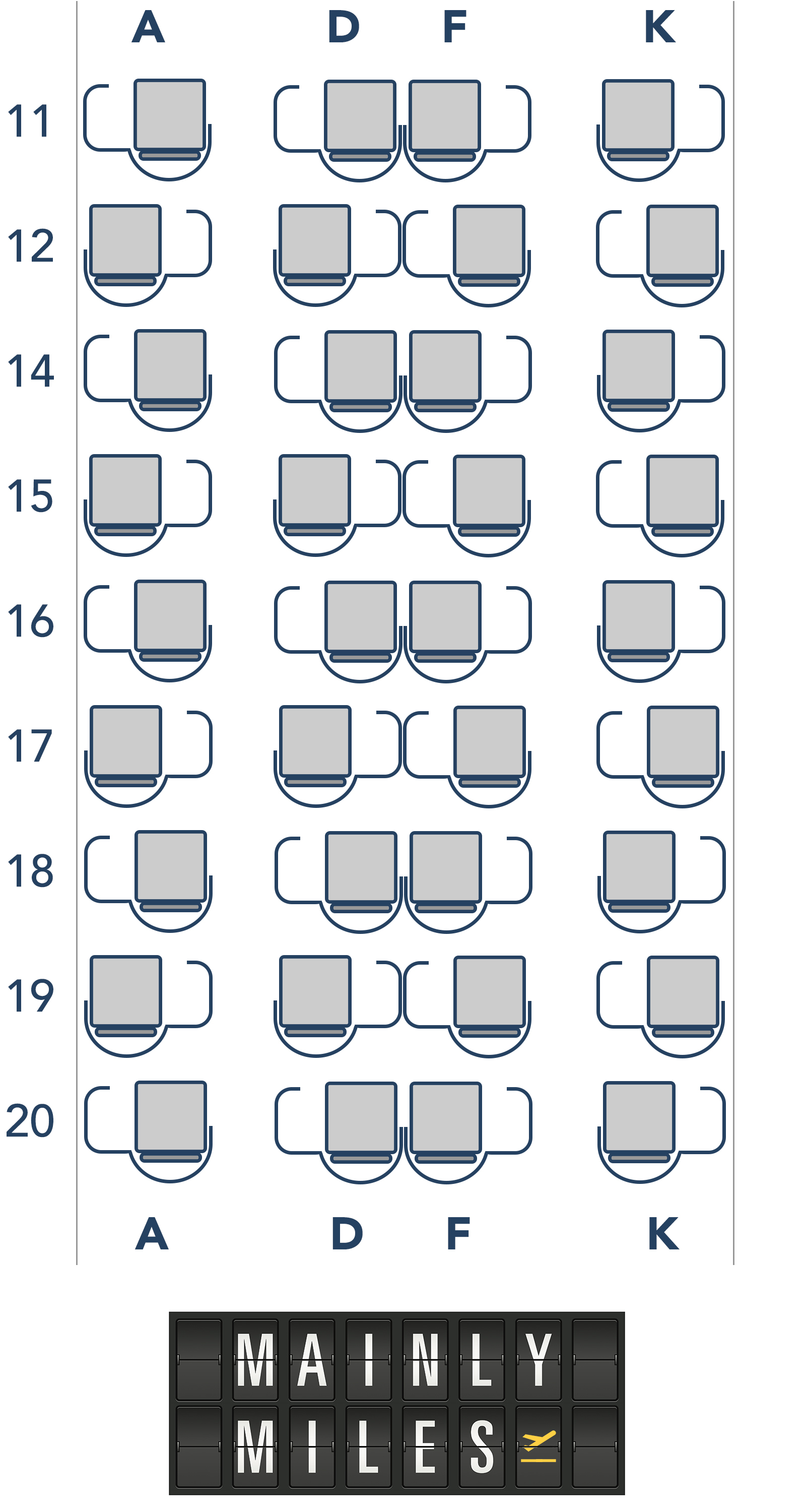 The predicted seat for the new regional business class is shown in the following YouTube video by Runway Girl Network. Note that this is the basic seat design, with no customer adaptations. The final Singapore Airlines version is likely to have a different colour scheme and furnishing options.

We are a little surprised

As the 787-10 and the new regional business class product is predominantly to be used on shorter flights between major Asian business centres like Bangkok, Jakarta, Manila and Hong Kong, we actually expected Singapore Airlines would more likely go with the new Qantas business class seating layout. That also uses a staggered 1-2-1 arrangement, but retains solo seats at all rows in the middle section, rather than alternating between solo and couple pairs.

Which other airlines have this configuration?

The staggered 1-2-1 business class seating layout has been common on a few carriers for years. Some of those (unlike Qantas) who configure it with alternating solo / couple seats in the middle section include:

The big benefit of course it that the layout offers a much more sociable option for couples or colleagues travelling together.

Summary of the expected seating layout

Which seats to choose on the 787-10 business class

Now that the initial launch schedule for the aircraft has been announced, many of you may be booking redemption flights or firm tickets on these services to check out the new product.

The Singapore Airlines seat map, however, doesn’t provide much guidance at this stage about which seats will be exposed to the aisle, and which will have a more private arrangement.

Here are our tips about what seats to pick at this stage, based on what we expect.

For couples, choose a middle pair (D and F) seat together at row 11, 14, 16, 18 or 20 if you can. These seats should be directly alongside one another, and we expect them to be shielded from the aisle by the side console at each side, a bit like the middle seats in the new Singapore A380 business class.

The new Singapore Airlines Airbus A380 business class seats have a similar side-by-side couple arrangement, with consoles located to the aisle side. (Photo: MainlyMiles)

If you pick a D/F pair in one of the other rows (12, 15, 17 or 19), we expect you’ll actually find yourselves a long way from each other with the dividing console for each seat located between you, and both your seats will be more exposed to the aisle.

If you’re travelling on your own, the A or K seats aligned directly by the window on each side will have the most privacy, as we expect the seat ‘shell’ and storage console to be between the seat and the aisle. That means going for an A or K seat at rows 12, 15, 17 or 19. Note that this means we predict there are only 8 business class seats on the aircraft with this high privacy level, out of 18 ‘window’ seats and 36 business class seats in total.

Should none of those seats be available (and we expect they will get booked first once people become familiar with the configuration), the remaining solo seats are all more exposed to the aisle.

Your other fallback could be to pick a middle ‘couple’ pair if no other passenger has reserved the seat alongside, in the hope you can secure this double seat all to yourself. In the worst case if someone is seated next to you, as we’ve said above, we expect there will be a decent privacy divider.