Skip to content
All the latest on the upcoming Singapore Airlines 787-10: Seats, Routes, Schedules, Redemption availability and more. 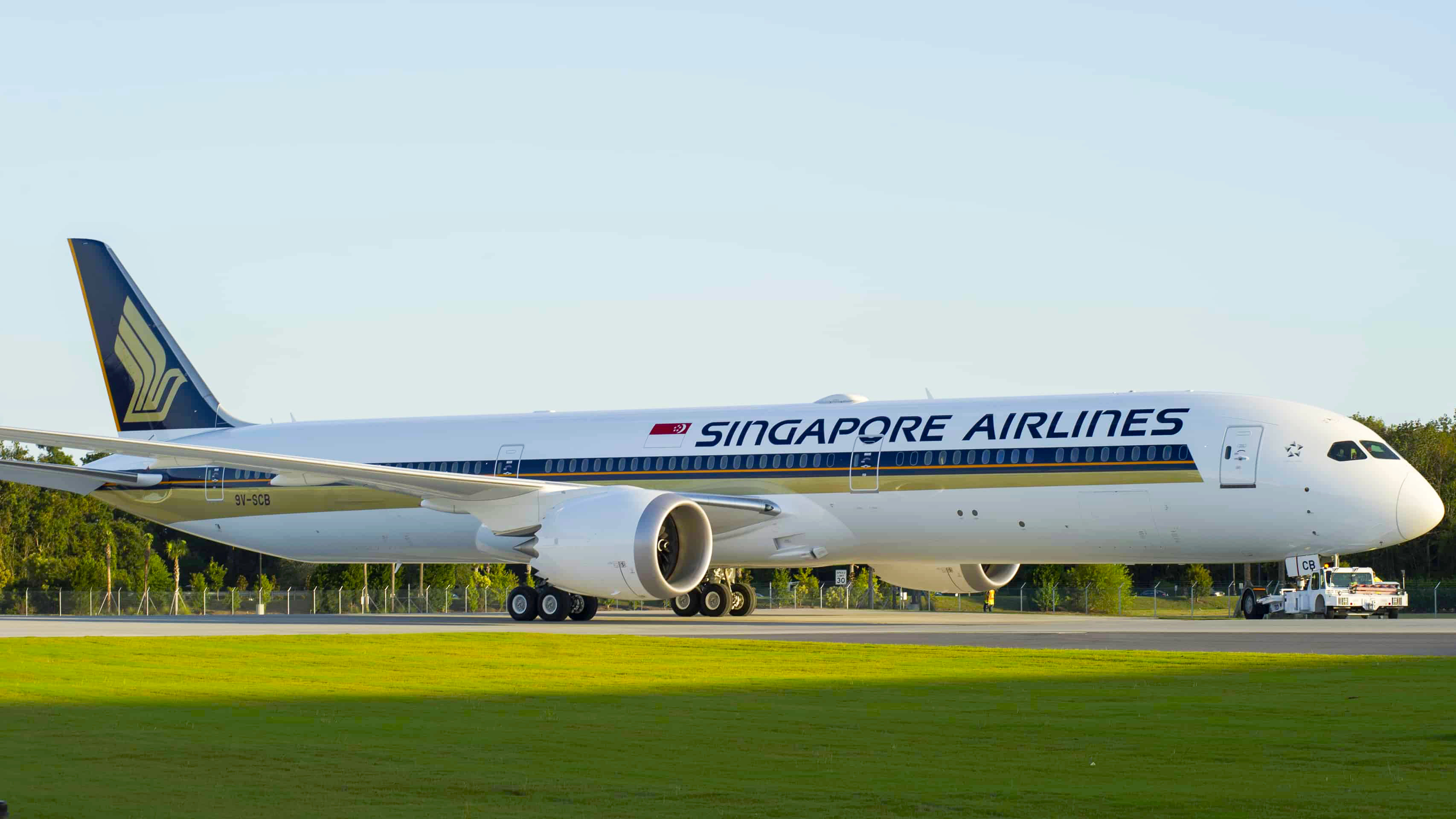 We’ve talked a lot in the last couple of weeks about the new Singapore Airlines 787-10 aircraft, set to arrive just over a month from now and due to commence commercial passenger flights on 3rd April. Though hundreds of 787 aircraft now ply the skies each day, this will be the first of the largest variant (the ‘dash 10’) to enter commercial service worldwide.

There are a few reasons we’re quite excited about this new plane. Maybe a bit too excited. Here’s our summary of what to expect:

Singapore Airlines is ramping up 787-10 operations quickly this year, with 8 aircraft due for delivery during 2018 as shown below, including 3 planes arriving in May alone.

Source: 787Blogger
* – SCG and SCH are the first two 787-10s ever built, which flew as test aircraft in the Boeing certification campaign, but now require some re-work and customer interior fittings, hence their later delivery dates.

Not only will SIA receive eight aircraft this year, they will get the first seven 787-10s delivered worldwide. Etihad will be the second operator, but won’t receive their first example until October, just before SCH is delivered. United will then get their first -10 in November.

After the initial eight planes, the next batch for SIA will start arriving in 2019.

The first 787-10 is 9V-SCA, and her delivery flight is due to land into Singapore (from Charleston, via Osaka) on 28th March. Later that day there is scheduled to be a launch event hosted at the Changi Airport JetQuay CIP terminal for VIPs and PPS club members.

We’ll be live blogging on the day – so stay tuned to mainlymiles.com and our Facebook and Instagram feeds for the news, as it happens.

It is now almost certain that the Australian Business Traveller reveal of the Stelia Aerospace ‘Opal’ business class seat will be the product installed at the front end of this aircraft. What remains to be seen is the extent of the customisation by SIA of the furnishings and fittings, which are likely to make the seat look significantly more luxurious (we hope!) than the standard images.

Obviously a vast improvement on its predecessor, but specifically it provides a full-flat bed, much improved privacy (especially in the window seat that is aligned directly against the window), and hopefully storage aplenty.

We’ve travelled several times on the new Qantas A330 business class and were impressed with it; their concept is not too dissimilar to Stelia ‘Opal’ and so we hope the fitment to the 787-10 should be just as good.

The likely cabin configuration that we exclusively revealed here makes it an even better proposition for couples… as we predict the ‘Love Seat’ middle pair option.

Due to the staggered arrangement for the Stelia ‘Opal’, seats are offset row by row. This allows a higher seat density, but also maintains privacy and retains decent bed length. In bed mode, your feet basically fit under the side console of the seat in front of you, an efficient use of space.

Airlines effectively have two options with this kind of configuration, that used by Qantas with the ‘solo business traveller’ layout, where all middle seats retain privacy, and an alternating couple / solo pair arrangement like Asiana and Emirates on their A380s.

Judging by the seat maps, Singapore Airlines has chosen to create some closer middle pairs, or so-called ‘Love Seats’. Our representation below gives you an idea of the configuration we expect to see, based on the GDS disabled access seats information. We could still be wrong, but the disabled access seat plan makes no sense otherwise.

Traveller Tip: For a detailed guide on which seats to choose if you’re booking ahead on the 787-10 business class – check our predictions here.

Good news – the 787-10 will be delivered with Panasonic’s latest in-flight Wi-Fi hardware promising ‘broadband connectivity’. Long overdue on the Singapore Airlines regional fleet as the A330 and 777-200/-300 (non-ER) have never featured it.

This product has been tried and tested on-board Scoot’s Boeing 787 aircraft and in our experience provides good speed. However, Wi-Fi packages with Singapore Airlines do tend to be a little on the pricey side.

We’re not sure which data provider has been chosen yet, or whether Boingo or other access plans will be available, but the IFE will be the Panasonic eX3 system as currently installed on the A350 fleet, so we expect it will be the same. We’ll update you once the aircraft enters service.

A Singapore Airlines spokesperson confirmed to us last week that the new 30MB free Wi-Fi allowance for business class passengers, and PPS Club members travelling in any class, will be available on the 787-10 fleetwindows.

Everyone hates that missing window disappointment, when they settle into a ‘window’ seat on an aircraft and find themselves staring at a blank panel instead. Even business class is not immune, as you’ll see from the photo above in the ‘Wi-Fi’ section, and in the cover image of the article, there is a missing window in the business class cabin about halfway down.

It’s difficult to judge from the outside, but we expect this will probably affect row 16 (i.e. seats 16A and 16K). We predict the seat design at this row to have a side console between the seat and the window, so the effect may have been minimised as part of that design, but for now if you’re fan of the view outside – avoid these window seats.

(Note: Airlines don’t deliberately exclude windows to annoy us, air conditioning ducts run in these areas behind the cabin wall – so a window cannot be placed there)

For the toilet, that is. Not content with increasing the economy passenger to toilet ratio to 49:1 on their latest Airbus A380 aircraft (it was 40:1 on their earlier models), Singapore Airlines has gone one further with the economy cabin on the 787-10 – only 5 toilets will be shared by 301 passengers, a 60:1 ratio.

This is the same as low-cost subsidiary Scoot offer on their A320 and 787-9 aircraft, and is actually poorer than the ratio offered in economy class on the Scoot 787-8 planes. A harsh change from the more civilised 36:1 ratio on the current SIA regional fleet of A330s in economy class.

We can only imagine the queues after the breakfast service prior to landing on an 8-hour sector to the east coast of Australia or Japan.

Here’s the rollout plan for the first two aircraft joining the fleet:

As mentioned in our original schedule reveal here the official “first route” will be Osaka (KIX) but the aircraft will actually operate to Bangkok (BKK) and Kuala Lumpur (KUL) for a month before that, for crew training and familiarisation.

Perth will be the official second route to be added to the schedule. There’s a one-off schedule on 7th May (SQ223/214) before it slips into its regular slot (SQ215/216) the following day, replacing a current A330-300 service. The inaugural flight on 7th May seems to have been missed in the other announcements, perhaps because it’s a different flight pair for that day only, but it’s definitely there:

ExpertFlyer showing 787 cabin on 7th May

ExpertFlyer showing 787 cabin on 7th May

Here’s where we know the Singapore Airlines 787-10 is flying so far, based on the latest schedules loaded into the GDS.

Star Awards are redemption tickets made available to members of frequent flyer programs across the Star Alliance group (some 26 other airlines).

While Singapore Airlines usually blocks redemption availability of their latest business class and first class cabin products to Star Awards (instead keeping them exclusively for KrisFlyer members), they are p