Skip to content
With the wealth of painstaking preservation of culture and history in this new project - have Six Senses been able to provide the 5-star luxury their patrons crave? 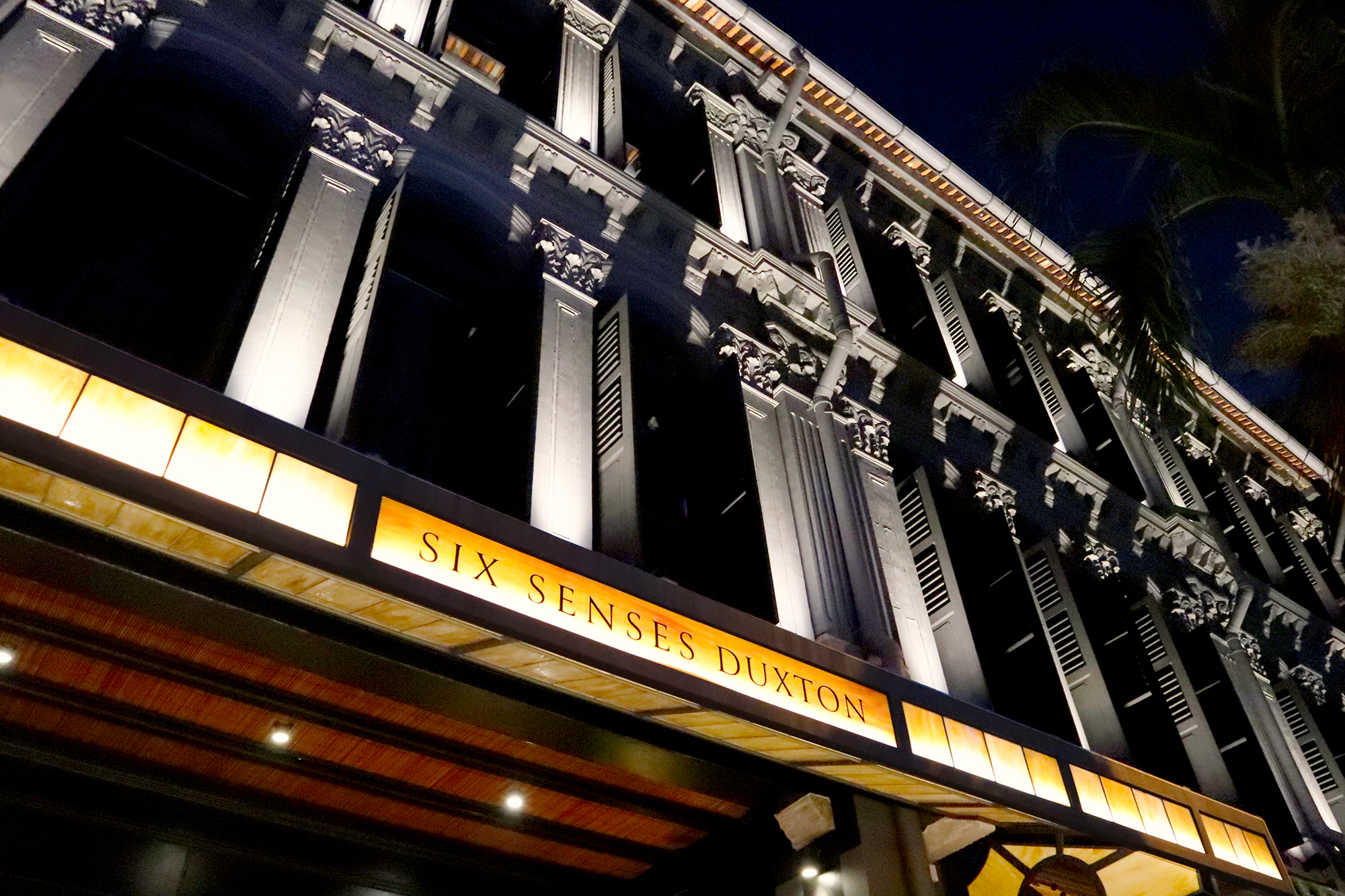 We checked in to Singapore’s newest hotel three days after the official opening to explore the first urban interpretation from the Six Senses brand – right in the heart of Singapore.

The brand currently operates 11 resorts and 30 spas spanning 20 countries – small fry in the SPG/Marriott and Hilton/IHG behemoth world we live in. Although grand plans lie ahead with seven new resorts and two spas opening between now and 2019 – they are certainly a fast-growing brand to watch out for.

Usually found on a pristine white sand beach – Six Senses hotels have up until now focused on ultra-lux, sustainable wellness resorts. Prime examples of this concept are the Six Senses Con Dao in Vietnam (which looks fantastic – we’ll be reviewing later this year for another perspective on the Six Senses brand).

So – an inner city hotel, occupying colonial-era shophouses and situated in the bustling foodie hub of Chinatown in central Singapore is certainly a departure from the norm.

This is the first city hotel for the brand and represents the first half of the overall project, Six Senses Singapore, which later this year will include another building situated at nearby Maxwell Road.

The concept of the hotel is to celebrate local culture and history whilst playing on the stunning heritage aspects of the property.

Six Senses have partnered with the building owners Satinder Garcha and Harpreet Bedi of Garcha Hotels, experts in the boutique heritage property arena, to ensure the success of this project. The pair is responsible for The Vagabond Club, located only a stone’s throw away – another beautiful and award-winning property.

The question is, with the wealth of pain staking preserved culture and history at this new project – will they still be able to provide the 5-star luxury and serenity that Six Senses’ patrons crave?

In the past the building has played host to rickshaw pullers, opium and gambling dens and even further less reputable vices.

More recently it was operated as the Berjaya Hotel, then replaced by The Duxton Hotel. It closed in June 2015 – promising to be open again the following year.

The hotel has had a bit of an identity crisis since it closed. The Starwood / Marriott group laid claim to it in September 2016 announcing it would be the Singapore debut of The Luxury Collection Hotels and Resorts brand. The 2017 opening never happened and it wasn’t until late January 2018 that Six Senses issued a press statement announcing this was to be their first city centre hotel.

It has been restored by Anouska Hempel – of Hempel and Blake’s hotels in London and former Bond girl from ‘On her majesty’s secret service’.

The new hotel features a total of 49 guest rooms and suites.

The entrance way is grand and imposing with elegant dark wood features, Chinese porcelain and the heritage design award plaque flanks the doorway.

The lobby continues the theme of dark wood mixed with Chinese accent lamps. Yellow / gold against black is the main accent colour here, with green palms breaking up the palette.

Check-in was fast and efficient with friendly service. After a refreshing welcome drink, a cold towel and brief chat with the staff about their opening week we were shown to the room by Spencer – soon to be the front office manager at the nearby Six Senses Maxwell.

Due to the unique nature of the architecture, no two rooms are the same giving a wonderful sense of anticipation as you approach your room door for the first time. We were not disappointed.

Three types of standard room and five different suite categories are available for booking. For the main part of this review, we’ll focus on the Duxton Duplex Suite we booked. 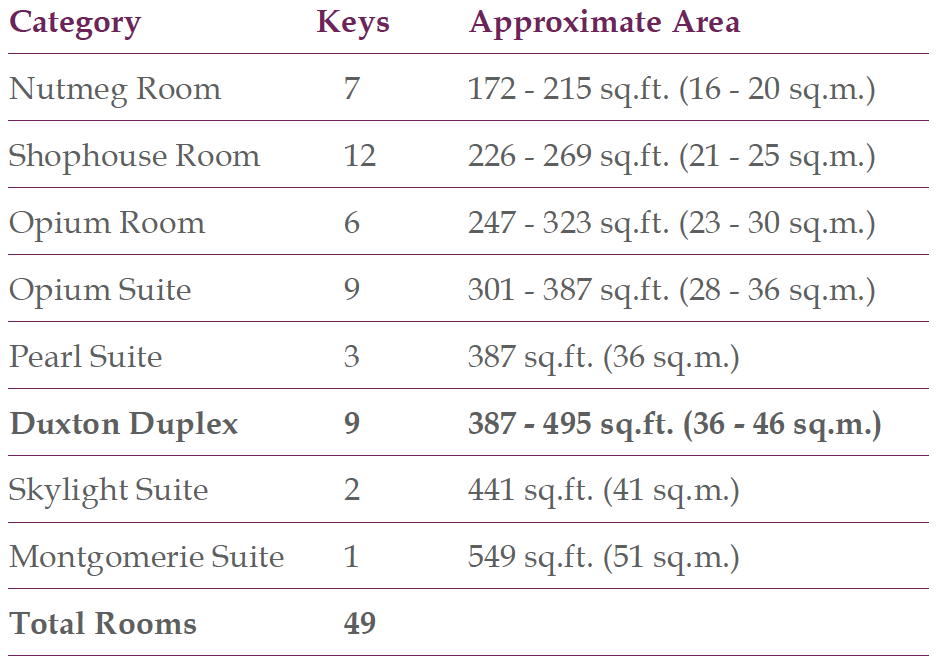 These nine suites run along the Duxton Road side of the hotel and are all located on the 3rd storey. As you enter the room you are greeted by three tall traditional style windows. The furniture is almost entirely black with hints of gold and yellow.

Surprisingly, despite the dark woods and black colour scheme, the room doesn’t feel dark. There is plenty of designer lighting in the room, which helps offset the palette and through the windows flows an abundance of bright light and an entirely different low-rise perspective of the Singapore skyline.

A black kidney-shaped sofa, ottoman, desk and dining table occupy the downstairs area. There’s a Nespresso machine with eight coffee capsules and a selection of teas for use with the dedicated teapot and cups.

The water provided in glass bottles is “Six Senses Water”. The brand produces its own drinking water by treating, purifying, mineralising and bottling it in order to mitigate the negative environmental and social aspects associated with imported water and plastic bottles.

The glassware in particular is beautiful – created by William Yeoward and part of the American Bar crystal collection. A top-end product, the brand has the royal warrant of appointment.

The windows look down over Duxton road, which we suspected would create some noise disturbance. Significant double (possibly triple) glazing has taken care of this and there is no noise at all from outside.

The owner himself is apparently a light sleeper and therefore personally addressed the soundproofing of the windows. Because of this, the windows don’t open. In fact, the only noise comes from the corridor outside the room – other than that it’s a silent sanctuary.

Up the beautiful (but not new to Six Senses) spiral staircase are the bedroom and bathroom. Lower ceilings up here give a cosy feel.

Plenty of thoughtful, quality features help the room stand apart from the crowd: USB ports, multi-standard power sockets and a retro-styled phone to mention a few.

The turn-down service includes sleep promoting tinctures, local herbal remedies and a brain-teaser to help you disconnect and relax.

The bathroom is a sleek, black wet room with high-end fittings from Villeroy and Boch.

A heated mirror runs along the back wall opposite a full-length rain shower. Interestingly – there’s no bathtub. In fact, only one room type at the hotel has a bath: The Pearl Suite. More on that room later.

The complimentary Wi-Fi connection in the hotel was fast and reliable throughout our stay.

After settling in we decided to have some lunch in our room. Typically we’d order our perennial favourite The Club Sandwich – a benchmark by which we have judged hotels worldwide for years.

However the room service menu here (other than breakfast) only offers local options from the hotel’s Yellow Pot restaurant. No issue – we opted for the Cold-boiled Chicken with Spicy Peanut Sauce and Pickled Cucumber and Crispy BBQ Pork Belly with Mustard.