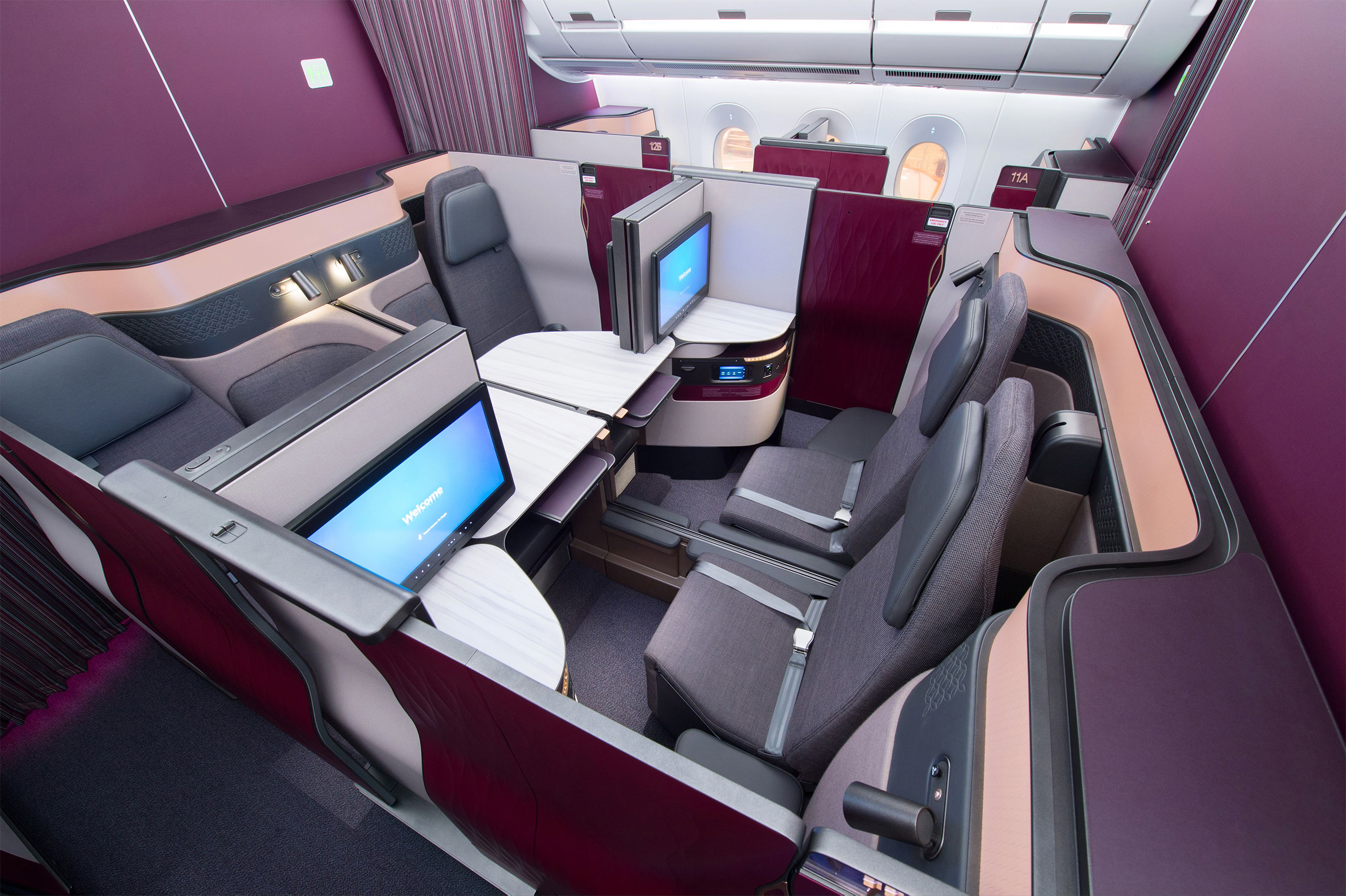 A couple of months ago we wrote about how you can try Qatar Airways’ new Qsuite product from Bangkok each day. The bad news with that particular flight, operated by a 777-300ER, is that it reverts to the older 2-2-2 configuration with no Qsuites from 28th October 2018. Perfect timing then for some exciting news if you’re interested in this groundbreaking Business Class seat – the Singapore – Doha route to is be upgraded to feature Qsuites from November.

Initially one daily flight on the route is to be upgraded to the Airbus A350-1000 from 1st November 2018 (2nd November from Singapore) with a second out of three total daily flights following suit from 1st December 2018.

This gradual shift from the Airbus A350-900, which currently serves the route, will allow you to try out this fantastic looking seat on a daily basis on flights from Singapore to the Middle East and a wide range of destinations further afield in Europe and the USA for example, some of which like London, Frankfurt and New York feature the Qsuite product already.

As announced earlier today and confirmed by GDS timetables, the following schedules will be effective. Qsuites equipped aircraft are highlighted in maroon colour.

The schedule is valid until 30th March 2019, the end of the northern winter season, after which time the route in GDS returns to three A350-900 aircraft, all of which indicate a non-Qsuite configuration in Business Class (some Qatar A350-900s do have Qsuites however).

The Gulf Times is reporting that the longer-term plan is for all three flights on the Singapore – Doha route to be operated by the A350-1000 (all of which have Qsuites) from April 2019, however the GDS timetables have not yet been updated to reflect this. We’ll update this article accordingly once the confirmation can be made.

It’s also worth mentioning as part of the schedule changes that Qatar Airways will also replace an A350-900 with a Qsuite-equipped A350-1000 on their Tokyo Haneda – Doha route from the beginning of January 2019. This may also be of interest to our readers.

Our review is coming soon

More exciting news is that we just so happened to secure a Qsuite redemption yesterday (on a different route) as part of our Europe trip next month. In 12 days we’ll be trying it out for ourselves, on the very same A350-1000 aircraft set to serve the Singapore route from November.

Keep a look out for our usual comprehensive review of this exciting new product.

One good thing about the Qatar A350-1000, aside from obviously having Qsuites, is that there are 46 of them installed on this aircraft, 10 more Business Class seats than were available on the A350-900 (a 28% increase).

It means from December this year there will be 92 Qsuites per day on this route, which should lead to decent award flight availability.

The table below shows how many miles or points you’ll need to redeem a Qsuite between Singapore and Doha with a variety of frequent flyer programs.

Bear in mind that Qatar generally release more award seats for connecting itineraries than for individual sectors. For example you may easily find a number of award seats from Singapore to Frankfurt on a particular pair of flights, but there are no award seats on the same first flight on that itinerary – i.e. just between Singapore and Doha.

It’s how several hub-and-spoke carriers manage their inventory for both revenue and award tickets. The key here is don’t check Singapore to Doha in isolation, find no award seats available, then give up. You might well find a redemption on a connecting itinerary.

Don’t forget the Qatar Privilege Club suffered a sudden shock devaluation in May, increasing the miles rates significantly on many of their routes. You’ll get the best rates using another frequent flyer program to redeem the Qatar Qsuites between Singapore and Doha (or beyond), such as American Airlines AAdvantage or Asia Miles.

The news we’ve been waiting for as far as Qatar’s Qsuites is concerned, especially with the closest alternative (a daily Bangkok connection) reverting to a non-Qsuites configuration from the end of October.

Hopefully the Gulf Times are right and the plan is for the Singapore route to feature this new product permanently from April next year. Until then there’s plenty of opportunity for you to try this new seat on up to two flights per day from December. There are also several regular Qsuites routes now flying from Doha.

Remember, award availability to and from Doha is irrelevant unless that’s your final destination. Qatar’s award space works on a city pair basis, so if you intend to redeem further on the Qatar network from Doha, more award inventory is usually available. Check as many routings as would suit you and a redemption ticket may well appear for the whole itinerary.

For us another Europe trip beckons and we’re flying the A350-1000 on Qsuites in just 12 days from now, so keep an eye out for our comprehensive review.

Will you be trying out the Qsuites from Singapore, or have you flown the new product already? Let us know in the comments section below.