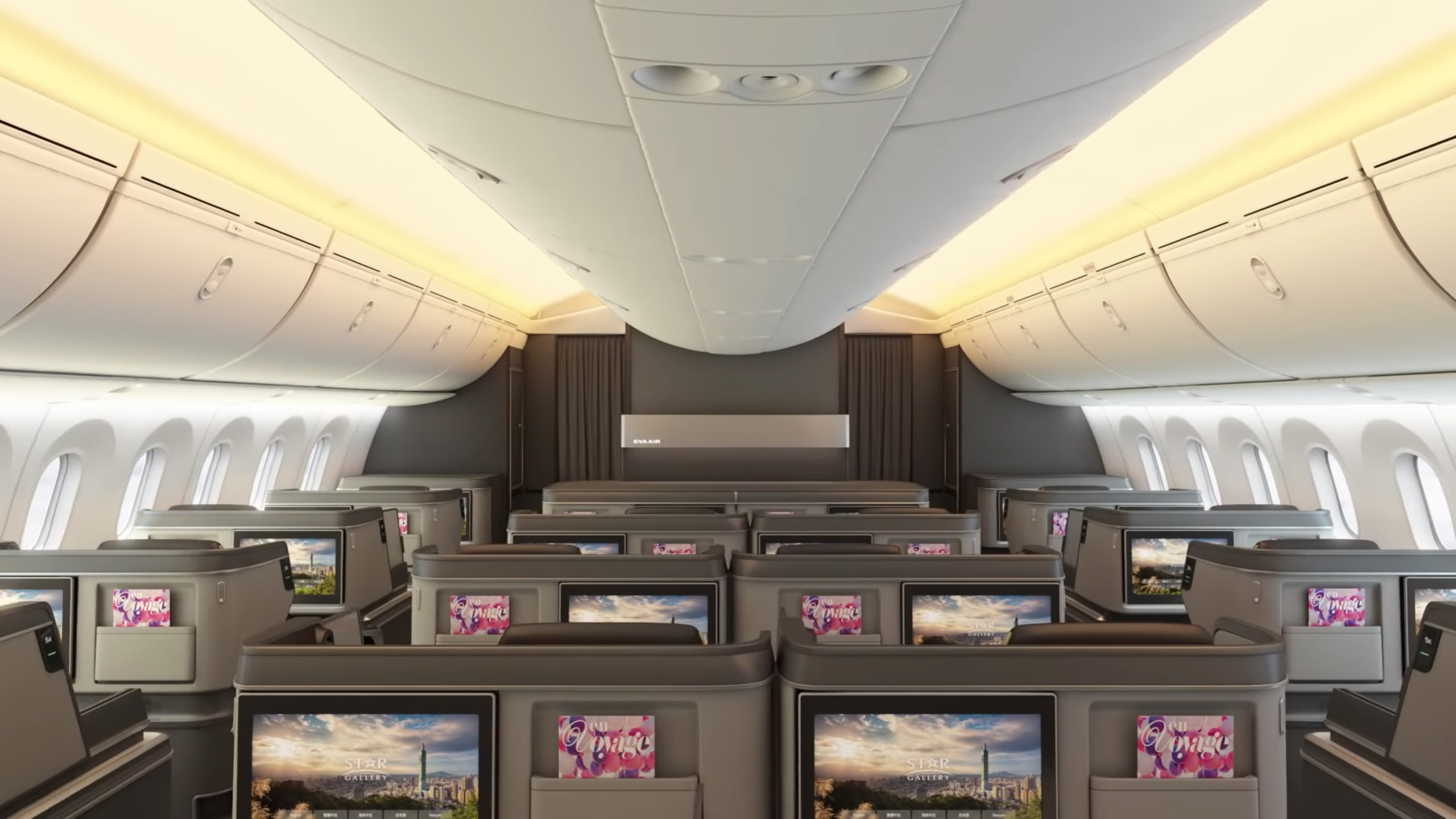 Star Alliance airline EVA Air has revealed a brand new Business Class seat for its upcoming Boeing 787-9 and 787-10 aircraft, due for delivery from October 2018, and in a departure from their current Zodiac Cirrus seat the Taipei-based carrier has switched to the all forward-facing Thompson Aero Seating Vantage XL product in a staggered 1-2-1 layout.

Unlike the current Cirrus design installed on EVA Air’s Boeing 777 fleet, the new product for their 787 does not feature a ‘reverse herringbone’ format, whereby the Business Class seats are angled away from the aisle.

Instead in the new design each seat is aligned directly with the aircraft fuselage, with the foot area in bed mode taking advantage of the space underneath the console of the seat in front. That requires each seat to be laterally staggered from the one in the preceding and subsequent rows for effective use of space.

BMW Group company Designworks was tasked with the customisation to incorporate EVA’s brand image through “mature, muted colors to enhance the feeling of a comfortable, spacious environment”. The same company crafted Singapore Airlines’ 2013 First Class seat on their newest Boeing 777-300ERs, just in case you wondered if they were cut out for the job.

Each seat is 23 in. (58.4 cm) wide and converts to a 76 in. (193 cm) long flat-bed, according to EVA’s press release. Thompson Aero documents sighted by Mainly Miles in combination with the quoted bed length lead us to conclude EVA has opted for the minimum design seat pitch for the Vantage XL seat of 44 in. (111.8cm), though the actual seat pitch has not been quoted by the airline.

An 18in. touchscreen HD personal monitor will also be fitted for each passenger. Very few good quality photos of the actual aircraft (currently parked in Charleston, USA) exist, however those that we have seen confirm this aircraft will be Wi-Fi enabled too as the tell-tale large satellite antenna is installed on the fuselage roof.

On a bit of a run with Asia-Pacific airlines lately, Thompson’s Vantage XL seat is already used in the Business Class cabins of Qantas, Malaysia Airlines, China Eastern and Philippine Airlines.

It also forms the basis for the Vantage XL Suite, used by Delta Air Lines in their award winning ‘Delta One’ Business cabin, now installed on their A350 and at least one 777.

Aside from the regular customisation such as the trim and finish, optional extras for this seat chosen by EVA Air include extended consoles with additional stowage, adjustable privacy panels between the centre seat pairs and seat number light / do not disturb function.

We understand the Vantage XL seat has also been chosen for the latest Business Class seats in Turkish Airlines’ new Boeing 787 and Airbus A350 aircraft, with rumours they have selected the optional sliding privacy door for a ‘Business Suite’ concept.

It will be very interesting to see what Turkish do reveal, but whatever it is – it will be a vast improvement on their current 2-2-2 (in some cases 2-3-2) long haul Business Class offering, a rather dated concept for full-service carriers.

Delivery of EVA Air’s first Boeing 787-9 is slated for 2nd October 2018, just 11 days from now. The airline has formally announced only one route so far for the new jet – Taipei to Hong Kong.

The 787-9 will replace the Airbus A330-200 in the EVA fleet, while the larger 787-10 will be used exclusively for regional Asia flights, according to this CAPA article.

GDS timetables have not been updated to reflect any 787 operation at this stage however, though it’s likely the first aircraft will spend some time operating shorter crew familiarisation flights to destinations including Hong Kong, Vietnam and Japan before serving a regular long-haul route.

This will be the first Boeing 787 ever to be operated in Taiwan under the jurisdiction of the Civil Aeronautics Administration (Taiwan), so it is also likely that some initial familiarisation and test flights will be non-revenue services between Taipei and Kaohsiung, a route on which EVA does not operate revenue passenger flights.

Subsequent deliveries bringing the EVA Air Boeing 787-9 flight up to 4 aircraft will complete replacement of EVA’s Airbus A330-200 fleet, meaning this new Business Class product should feature on intra-Asia routes between Taipei and Jakarta, Hong Kong, Guangzhou and Pnomh Penh as well as Brisbane.

Later deliveries to EVA of the 787-10 will commence in mid-2019, with the same Business Class seats installed. The exact configuration of those larger planes in terms of Business / Economy split has not yet been revealed, though we reckon a bet on something close to what Singapore Airlines achieve on their 787-10s (36J/301Y) won’t be far off.

It’s not yet known whether the Singapore-Taipei route will see the EVA Air 787 with the new Business Class seats, either as part of the familiarisation flights or as a future regional route (most likely with the 787-10). We’ll keep you advised if it’s going to happen, however for now the usual pair of EVA Air 777-300ERs fly daily on this route.

Wherever EVA Air end up flying their Boeing 787 fleet with these new Business Class seats, award flights can be redeemed using frequent flyer miles from a Star Alliance scheme like KrisFlyer.

If EVA’s 787 does eventually fly between Taipei and Singapore it’s 37,500 miles one-way in Business. That’s 10,000 miles more than Singapore Airlines are charging for an equivalent saver award flight on their own planes, but do bear in mind SIA are still exclusively flying their old 2009 regional Business Class seat on Taipei flights, and this new EVA Business product may well warrant the extra miles if it does appear on the route in future.

It’s interesting that EVA has opted to move away from the angled Cirrus seat in Business Class, still a popular layout among many airlines. Even more interesting that the bulk of their 24-strong Boeing 787 order is for the 787-10, a regional aircraft with limited range.

That means this latest Business Class product will largely feature on some of EVA’s shortest routes, a real coup for their regional passengers.

We’ll keep you updated on exactly where this new seat is flying on the EVA Air network as soon as we know.