One of the benefits of the UOB PRVI Miles cards in Singapore, for the last 18 months or so, has been ‘PRVI Pay’. For those not familiar, it’s essentially a way to generate unlimited points (subject to your credit limit), convertible into KrisFlyer miles or Asia Miles, at a fixed rate of 2 cents per mile.

Not great, but worth considering if you needed them, or knew you would definitely achieve much better value from them.

Here’s how it works for a typical payment:

Thing is, you didn’t even need to have an income tax bill to pay, or even produce. Provided you had the credit limit, UOB would do this “no questions asked”.

Yesterday UOB changed the small print on their PRVI Miles card website landing page. We noticed that they had neglected to update their actual PRVI Pay details page at the same time, so we contacted them to clarify the situation.

Unfortunately their response confirms that the change to the small print was correct – as of this morning the dedicated PRVI Miles Payment facility page now carries the same note at the bottom (despite the worked examples not reflecting the change yet).

Note: With effect from 15 March 2019, UOB PRVI Miles Payment Facility will only have the option to charge the requested amount as a one-time payment with a one-time administration fee of 2.1%. UOB

The admin fee is going up, miles will cost 2.1 cents each

With effect from 15th March 2019, the UOB PRVI Miles Payment Facility will charge an increased one-time administrative fee of 2.1% instead of 2.0%, effectively increasing the cost of ‘buying’ KrisFlyer miles from 2.0 cents each to 2.1 cents each.

Equally, you can also transfer to Asia Miles at the same ‘purchase rate’.

Ok so a 5% increase doesn’t seem too bad, but it is already top end and the new rate will now be above our upper limit to buy of 2 cents per mile.

Arguably the same principle applies as before – if you fall painfully close to a specific short term redemption you might still justify using PRVI Pay to relatively quickly see you ‘over the line’, even after 15th March at this 2.1 cents per mile rate.

It’s certainly a better option than buying the miles from Singapore Airlines at over 5 cents a piece.

Remember however that each transfer from UOB’s UNI$ into KrisFlyer costs S$25, and the minimum transfer ‘block’ is 10,000 miles, so using PRVI Pay to top up your account by a small level is only feasible if you’re already approaching one of those ‘blocks’ in your UNI$ account.

The installment option is gone

In the ‘good times’ a 12-month installment option was available for your PRVI Pay payments, allowing you for example to spread a fixed payment over a year and pay the 2.0% fee each month as you received the money into your bank account.

In May last year however UOB increased the fee for that method from 2.0% to 2.2%, making it a really unattractive miles purchase rate of 2.2 cents per mile. They also capped the installment period from 12 months to 3 months, so it was a dead duck for most miles collectors.

Well as of 15th March, even if you did utilise this relatively poor deal, it’s going.

You will no longer be able to use the installment option with your PRVI Miles card. If you sign up prior to 15th March, presumably it will continue until the end of your fixed 3-month period and then be unavailable thereafter.

Launched in mid-2017, and originally set to end in December that year, PRVI Pay was designed to help you pay bills like income tax or property tax, where credit card payment wouldn’t normally be available (though even back in those days alternatives were appearing).

Of course you’d earn some extra miles in the process, for a nominal fee. Even though the scheme was extended indefinitely in early 2018, this ‘unlimited miles generating’ option wasn’t likely to remain at the same rate forever.

The reality remains that it can be used to pay for just about anything you like, since UOB make the payment directly to your bank account. What you then do with the money is up to you.

That hasn’t changed, but the rate is becoming less attractive than ever, and there are many other ways to ‘buy’ miles at cheaper rates if you need to like ipaymy and CardUp.

How do we feel about PRVI Pay from 15th March? Well, as they write above the over-wing exits, “Emergency Use Only”. 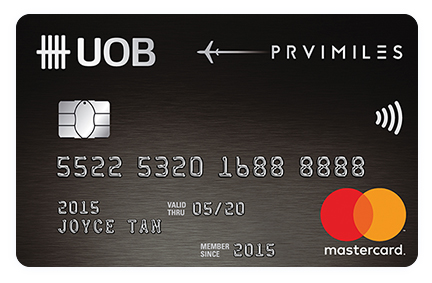