Skip to content
Our first Apex Suite Business Class experience was no disappointment, on board Oman Air's impressive, spacious and comfortable seat from Muscat to Jakarta. Did the food and service match up? 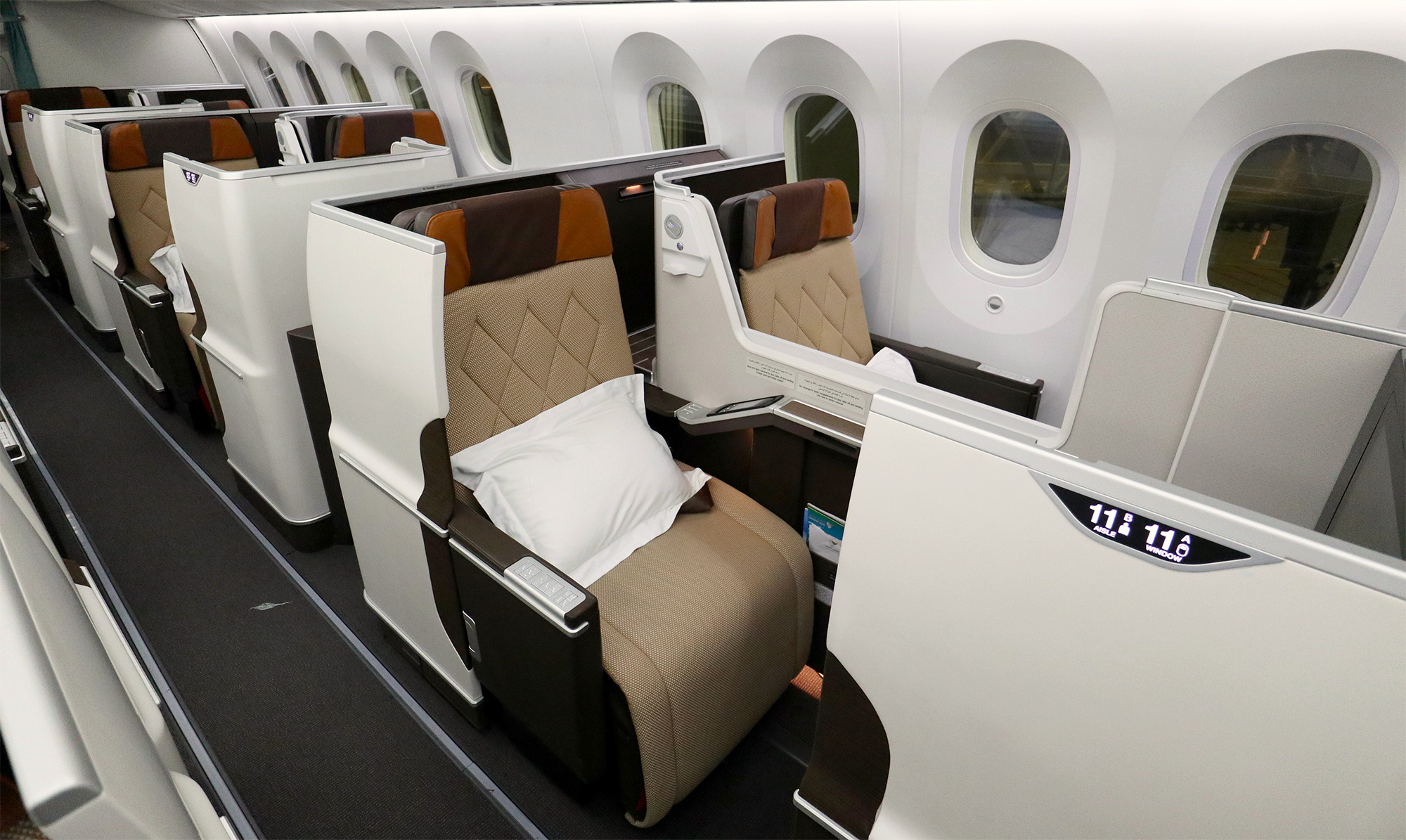 Originally designed and launched by B/E Aerospace (now Collins Aerospace), the ‘Apex Suite’ is touted as one of the best Business Class seats in the industry. On paper though, with a 2-2-2 layout, that seems a strange accolade.

The key to this design is a clever staggered arrangement at the window seats, allowing direct aisle access for the window passenger (and no one climbing over the aisle passenger at the window pairs), the primary drawback for older 2-2-2 configurations.

A high quality product, it takes up additional floorspace and so comes at the expense of passenger capacity compared to more dense layouts like the Zodiac Cirrus and Thompson Vantage XL. It is also rumoured to be the most expensive ‘off the shelf’ Business Class seat on the market. That perhaps explains its limited reach so far, with only Korean Air, Japan Airlines, Gulf Air and Oman Air currently using it.

Indeed the seat was originally designed as a high-density First Class product, and Korean Air has used it as both a First and Business Class seat on some 787s.

We were flying on one of Oman Air’s Boeing 787-9 ‘Version 1’ aircraft, a 2-class variant with 30 Business Class seats in a 2-2-2 configuration spread across four forward rows between the first two main aircraft doors (rows 10 to 14) and a single row behind the second main aircraft door (row 15), directly in front of the Economy Class section.

As mentioned, the clever design of these Business Class seats means all passengers have direct aisle access despite the 2-2-2 layout.

The remaining 258 seats on this aircraft are in Economy Class, with a 3-3-3 configuration.

The window seats (A and K) in Business Class have the highest levels of privacy once the divider is raised. Aisle seats (B, D, G and J) are more exposed.

Solo travellers appreciating the ‘suite-like’ closed off effect will have the best experience in the A or K seats, but can have a sufficiently private experience in any seat thanks to the large extendable privacy dividers.

Couples can choose the window pairs (A/B or J/K), which are slightly staggered but still allow for conversation with the divider down, or the middle pair (D/G), which are directly aligned and therefore most conducive to conversation.

We opted for 10A and 10B so that we could try out both the window and aisle experience.

If you’re flying on one of Oman Air’s pair of Boeing 787-9 Version 2 aircraft, which are dedicated to the twice-daily Muscat – London Heathrow route and also have a First Class cabin installed, the seat map looks like this:

Due to the presence of a First Class section, this configuration has fewer Business Class seats, 24 in total, across two very intimate 2-row cabins.

Oman Air has a separate check-in area for First and Business Class passengers.

There is a dedicated drop off point at the first door of the departures concourse, including a separate access lane for your driver to use. Your luggage is then taken by the porters who escort you through to the check-in counters.

Although it’s not a separate building it reminds us a little of the Singapore Airlines First Class check-in section at Changi Terminal 3. There are plenty of counters and staff to assist, with sofas and seating areas along one side with reading materials, which don’t seem to serve much of a purpose.

The process was swift and we were quickly checked in for the flight with boarding cards issued for seats 10A and 10B, which we had chosen online in advance when we first booked.

The First and Business Class check-in area leads to a private immigration counter and priority security screening section, so we soon found ourselves in the obligatory duty free shop, searching for a way up to level 5 and the Oman Air lounge.

It wasn’t difficult to find with both escalator and lift options. We took the escalator while admiring the impressive new terminal and found ourselves at the lounge entrance just 15 minutes after being dropped off at the terminal entrance by hotel car.

That’s a very quick thoroughfare considering we probably wasted 5 minutes of that time taking pictures of the First and Business Class check-in area.

Oman Air operates its own lounge at its home base, as you would expect. The facility largely caters for Business Class passengers, with a separate First Class section once you’re inside.

Overall a pleasant place to spend time prior to your flight, with a manned bar, Champagne, good food options and shower facilities, though it’s not up there among the best we’ve been to in the world.

We’ll cover the lounge itself separately so look out for that upcoming review.

We made our way to the gate 45 minutes before departure time. It was a chaotic scene there with the poorly labelled Business Class line full of Economy Class passengers, and the Economy Class line also nearly full.

There was no real effort to give any priority to Business Class passengers until one of the counter staff spotted our boarding passes then ushered us to come through the crowd (rather awkwardly) to the front.

Once boarding started from the gate lounge at 35 minutes before departure, there was no priority boarding for Business Class passengers and it was simply a free for all.

Despite being a dual airbridge gate, a single airbridge was used for boarding connected to the second aircraft door.

At a home base airport, especially a brand new one, where in theory it’s easy to pamper your premium passengers, this fell well below our expectations. It felt like a boarding arrangement at an outstation, and certainly fell well short of the impression created with the kerbside porters, private check-in area and very decent lounge experience.

After the slightly chaotic boarding process we took a few photos of the cabin then settled in to seats 10A and 10B.

The first thing we noticed about these seats was the size, they are huge for Business Class. Even longer than a British Airways First Class seat, and almost as wide, the all forward facing and direct aisle access arrangement is very impressive.

Another thing that appeared concerning on photos was that if you were sat in one of the window seats next to a stranger it wouldn’t feel very private. This was not the case at all. The clever stagger at these window pairs ensures good privacy even with the divider retracted.

You’ll soon realise there are no overhead lockers in the middle section. We’re not usually a fan of this, especially on the A350 with its strange ‘blocky’ flat ceiling, but on the 787 the design retains a nice curvature and feels more natural.

In any event if you’re in a middle seat you will have to share overhead locker space with your neighbour at the window side.

Another thing we noticed was that there are no overhead or in-seat adjustable air outlets, which is a shame but unfortunately it seems to be becoming more common.

A bottle of water is waiting in a dedicated holder at your seat. The crew came round with hot towels and shortly later offered Champagne.

Oman Air is serving Laurent-Perrier Brut in Business Class, a mid-range Champagne with good ratings that retails from around S$50-70 a bottle in Singapore depending where you buy it.

No complaints here, a nice drop and we certainly enjoyed a glass or two. We really appreciated the Champagne flute design with a good stem, a difficult balance to strike on an aircraft due to potential turbulence combining poorly with a high centre of gravity drink. Oman Air has done a good job here with an attractive high-end design.

If you’re flown with a Middle Eastern airline before, you’ll probably be familiar with the pre-flight Arabic coffee and dates. On Emirates you get this treatment in First Class, but on Oman Air it’s offered in Business Class too.

With the late departure time, and our plan to sleep after dinner, we skipped the coffee option but the dates were very good.

Shortly after this the menus, pyjamas and amenity kit were presented.

Pyjamas are also offered in a variety of sizes. They are good quality, reminding us of the Qatar Airways ones, and come in a carry bag that includes a pair of slippers.

Given the rather lacklustre comparative offerings in Singapore Airlines Business Class, even on 17-hour non-stop flights, this extensive selection from Oman Air is impressive and much appreciated.

There are three toilets in the Business Class cabin on Oman Air’s Boeing 787-9, meaning an excellent passenger to toilet ratio of 10:1 (Singapore Airlines has a 14:1 ratio in Business Class on its long-haul A350s, and 16:1 on its new A380s).

The toilets are relatively standard for a Boeing 787, including the mood lighting. They are also washlet (bidet) equipped. This is the first time we have seen the feature installed on a non-Japanese airline.

They are stocked with some additional Amouage toiletries including hand cream and both men’s and women’s fragrances. A baby-changing table extends over the toilet for those travelling with infants.

With our flight being only around 60% full in Business Class, there was never a long wait and we had the forward left toilet, just ahead of seats 10 A/B, almost all to ourselves.

If you need to stay connected during your flight you’ll be happy to know that Oman Air’s Boeing 787s are all Wi-Fi equipped.