Skip to content
"Business Plus" or a real First Class contender? We flew the British Airways 747 at the pointy end to find out.

British Airways First Class has an international reputation the airline would probably prefer it didn’t. “Business +”, “J +” and “The best Business Class in the sky” are among the less complimentary descriptions of BA’s most prestigious cabin.

While airlines across the world have developed their First Class products, and in some cases their Business Class products, into large enclosed suites, even incorporating double beds and showers, there’s a strong opinion that BA has failed to keep up with international competition.

Does the product deserve to be labelled in these ways though? We recently flew from London to Washington on the airline’s Boeing 747-400 in First Class to find out.

If like us you’re departing from London Heathrow, you’ll be eligible to check in at the new British Airways ‘First Wing’ at the far south end of Terminal 5 in Zone J. Drop-off by car should be at door 5 (the last door).

You can also take advantage of this facility if you hold British Airways Executive Club Gold status, or oneworld Emerald status, and are flying on a oneworld operated flight.

This area is designed to whisk you through the check in process, through a dedicated security lane, and straight into the British Airways Galleries First lounge. Perfect not only for those travelling First, but BA Gold and oneworld Emerald status holders, as we were about to discover…

Perhaps we were unlucky but when we arrived at the First Wing to check in for our flight, we were greeted by a sizeable queue.

It wouldn’t be the last time we stood in a queue that day, so if anything it was good practice!

It took about 15 minutes from joining the queue at the First Wing to completing the process. The staff member who checked us in was very friendly and helpful, also assisting with a minor name issue on one of our ESTA visas.

From the check in area you proceed straight through the private security channel.

Since we were busy snapping photos we were reminded by the staff who scanned our boarding cards not to take any pictures of the security area itself, for obvious reasons. We can confirm this media image accurately depicts the setup.

There are bench seats and tables for you to repack your items after security screening, and the whole process is quick and efficient. Security staff were friendly and courteous, but of course they are employed by a third party security firm not by British Airways.

The final stage of the First Wing, for many passengers at least, is the corridor from the security screening area into the Galleries First lounge.

From clearing security to arriving at the Concorde Room (via the Galleries First lounge) took just 4 minutes. In addition to the time spent queuing for check in, the whole process therefore took about 20 minutes.

In essence, the First Wing, while a nice idea, was a waste of time. We spent more time queueing than anything else. At the time the nearby Club World check in desks (adjacent to the First Wing) were empty and as a First Class passenger you can check in there, walk through priority security and then take the first right straight into the Concorde Room (via the ‘secret’ back door).

Maybe we were unlucky with the time of day, but queuing just to join a First Class check in area, whose private security channel leads you into a lounge you aren’t even destined for, doesn’t make much sense.

As we were flying in First Class, we headed for the Concorde Room. This lounge is exclusive to BA First Class passengers and Concorde Room cardholders, it is not for oneworld guests. 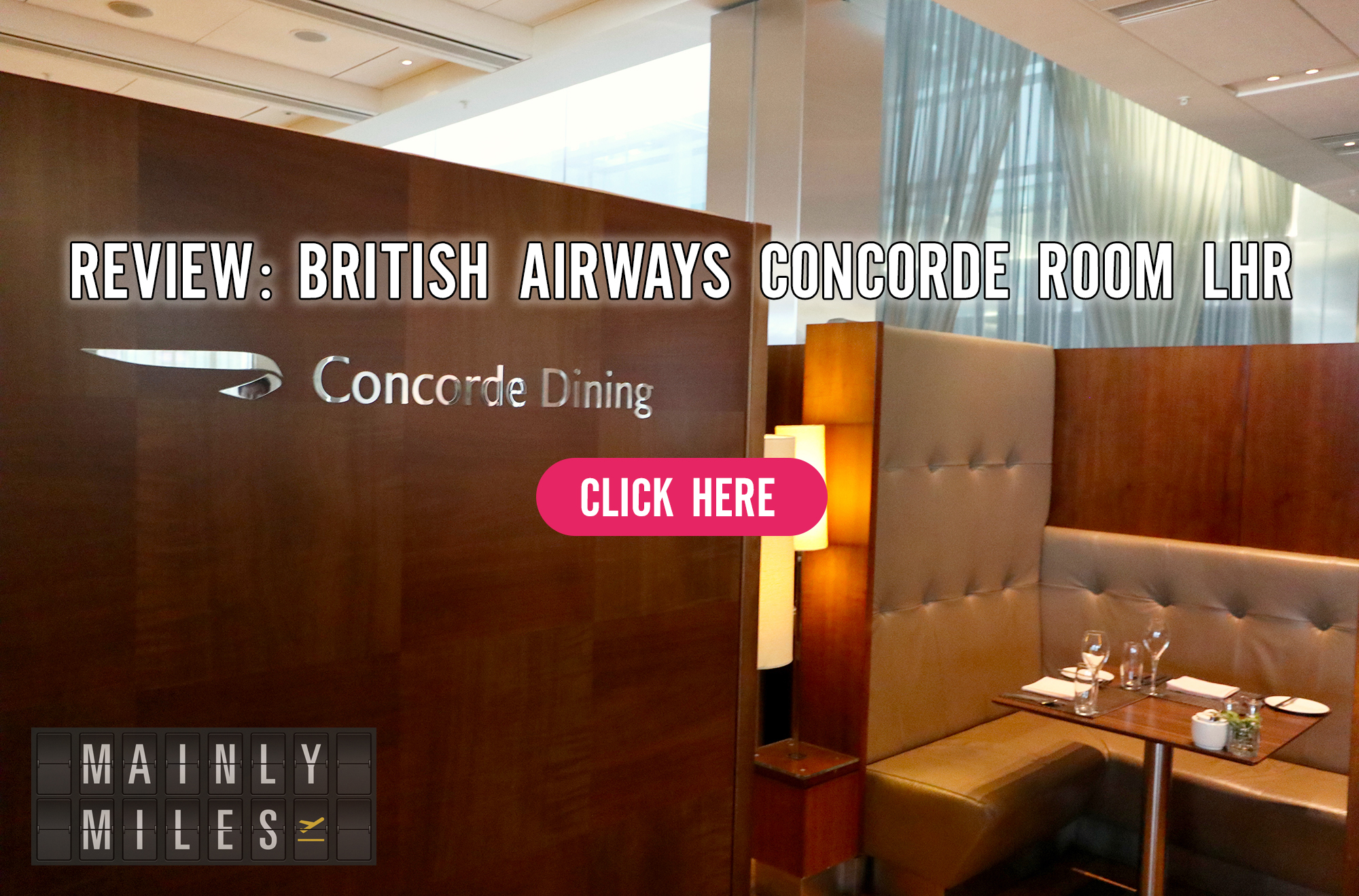 Click here to read our full review of the Concorde Room

The gate for our flight was only displayed on the screen in the lounge 45 minutes before departure time.

As usual at Heathrow T5, it meant taking a train to one of the satellite piers (B in this case), so we packed up our things and made our way out of the Concorde Room about 40 minutes before departure time.

The journey was actually quick and we arrived at gate B45 just 10 minutes later, 30 minutes before departure time.

The scene however was quite chaotic. Boarding had not commenced and banks of queues had already formed.

It wasn’t particularly clear where the First Class passengers should wait, and seeking assistance from one of the gate staff met with a rather curt response with us being directed to the back of the ‘Group 2&3’ queue. We decided that probably wasn’t right and joined the back of the Group 1 queue.

Only then did we realise our boarding passes did actually say ‘Group 1’ on them (we hadn’t even noticed before), which means you are boarding with Club World, BA Gold and oneworld Emerald status passengers. Lots of them.

Families with young children boarded first (which was a little confusing as initially we thought they might be First Class passengers and that we were just waiting in the wrong place!).

Finally Group 1 boarding commenced, 19 minutes before departure time. Only it hadn’t really commenced. What happened is we were all assembled into the (hot, windowless) airbridge where we then stood waiting for boarding to actually start. Around 7-8 minutes went by stood here. Not a First Class experience by any means.

Once boarding actually started, it quickly became apparent the entire 747-400 was being boarded through only the second main left door, via a single airbridge.

Finally, 11 minutes before the scheduled departure time, after a walk through Premium Economy, we were the first two passengers to arrive in the First Class cabin (everyone ahead of us was apparently destined for Club World, or were status holders).

Not a problem of course, we aren’t all that precious about being first on the plane, but the way it was arranged just didn’t feel very ‘First Class’ to us.

We were shown to our seats by the crew, who were friendly and welcoming but did seem a little flustered. We got the impression this late gate assignment and delayed boarding through a single door was all a bit of a last minute change for them too.

We were each offered a welcome drink and opted for a glass of Champagne, the excellent Laurent-Perrier Grand Siècle (LPGS) as served in the Concorde Room and in flight, so there’s no skimping on costs even at the boarding stage like with many airlines.

Emirates, for example, served Veuve Cliquot on the ground in First Class on our recent trip, before cracking open the Dom in flight. This is done to save duty (tax), which is payable if the aircraft doors are open in most countries.

The cabin decor is by London-based design firm forpeople,