Skip to content
Cathay will launch a new First Class product in 2021. Until then, is the existing offering up to scratch? 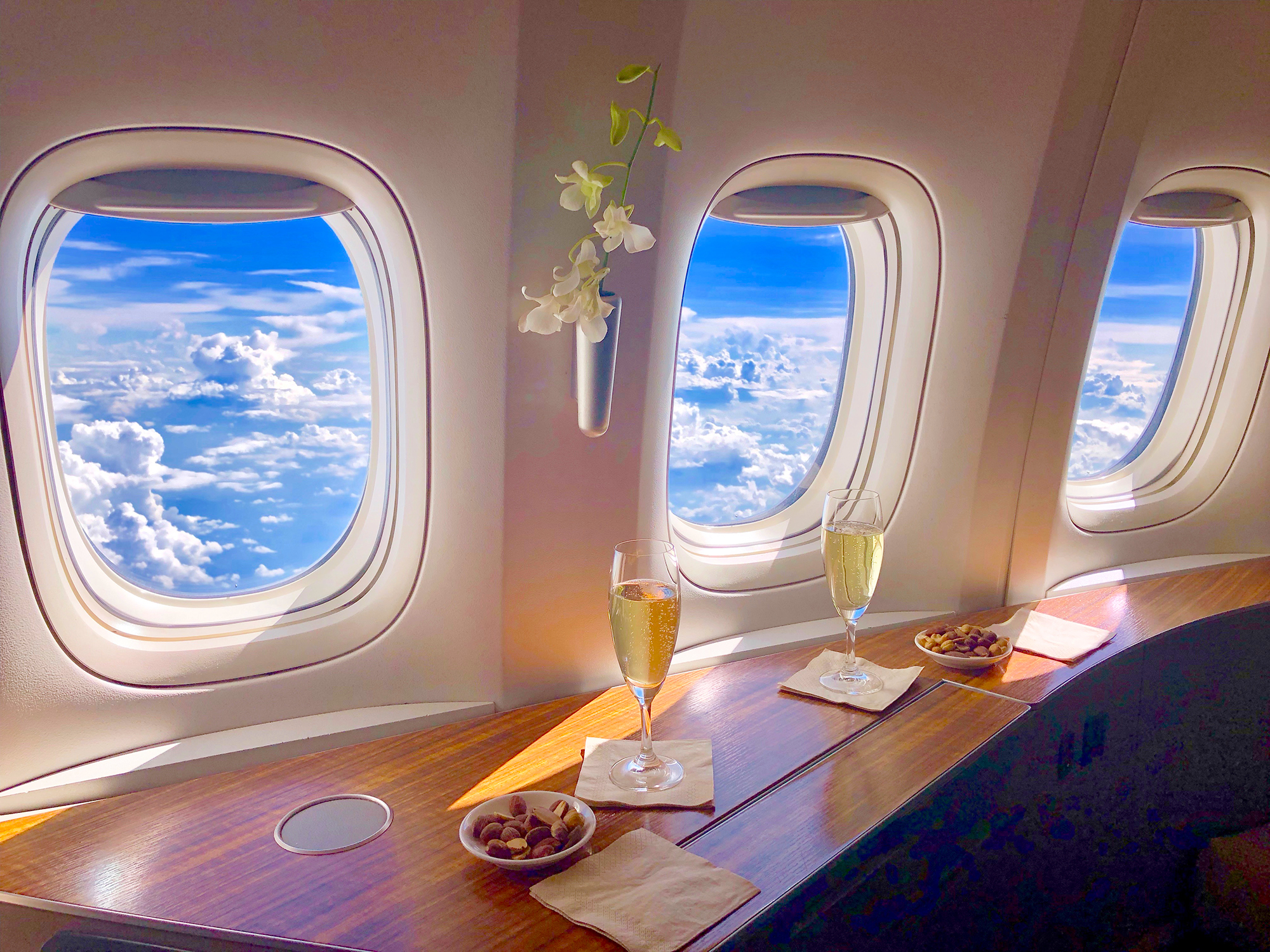 Cathay Pacific’s First Class seat isn’t ground-breaking or brand new, but its long-established reputation for comfort and service continues to win it many fans. With a brand new First Class product coming in 2021, we took a flight from Hong Kong to London in the current configuration to see whether it’s past its best, or still stands up to industry competition.

We arrived at Hong Kong International airport around 11.10am, three and a half hours prior to the departure time for our flight to London.

Cathay Pacific has its own dedicated First Class check-in counters in zone A.

Rather than the more traditional check in desks you find at airports with the luggage belt to the side and an agent sitting behind a desk, these are styled as ‘podiums’ where you interact with the agent while standing at eye height.

If you have checked luggage this is tagged and taken to a designated drop point out of sight by another agent.

The whole process was friendly and super-efficient, taking just 5 minutes. From here it was a short walk to the closest security checkpoint. This benefits from same level direct access to The Wing First Class lounge – out first stop for the obligatory review.

Passengers travelling in First Class with Cathay Pacific from Hong Kong have a wide variety of lounge options, not only including the carrier’s own facilities but also the well-rated Qantas Hong Kong lounge.

Almost everyone will want to sample one of the two dedicated First Class lounges, The Wing or The Pier. If time permits, you may want to try both – as we did prior to our flight.

The Wing is a good starting point, right after the security checkpoint on the left side. Once you’ve passed through the priority security lane, take a left and you’ll find this lounge has its own dedicated entrance to the First Class section on the same level (those flying Business have to go downstairs to the main entrance).

The Wing is our recommended starting point, especially if you arrive early as the departure gate for Cathay flights is often not assigned until around 2.5 – 3 hours prior to the scheduled departure time. Here you can enjoy a ‘cabana’ – your own private room with a chaise lounge, shower and bath, among the plentiful other lounge facilities.

At peak times the cabanas can suffer a waiting time, so if it’s your goal to try one – this is definitely the first lounge you should head for in order to put your name down as soon as you arrive. 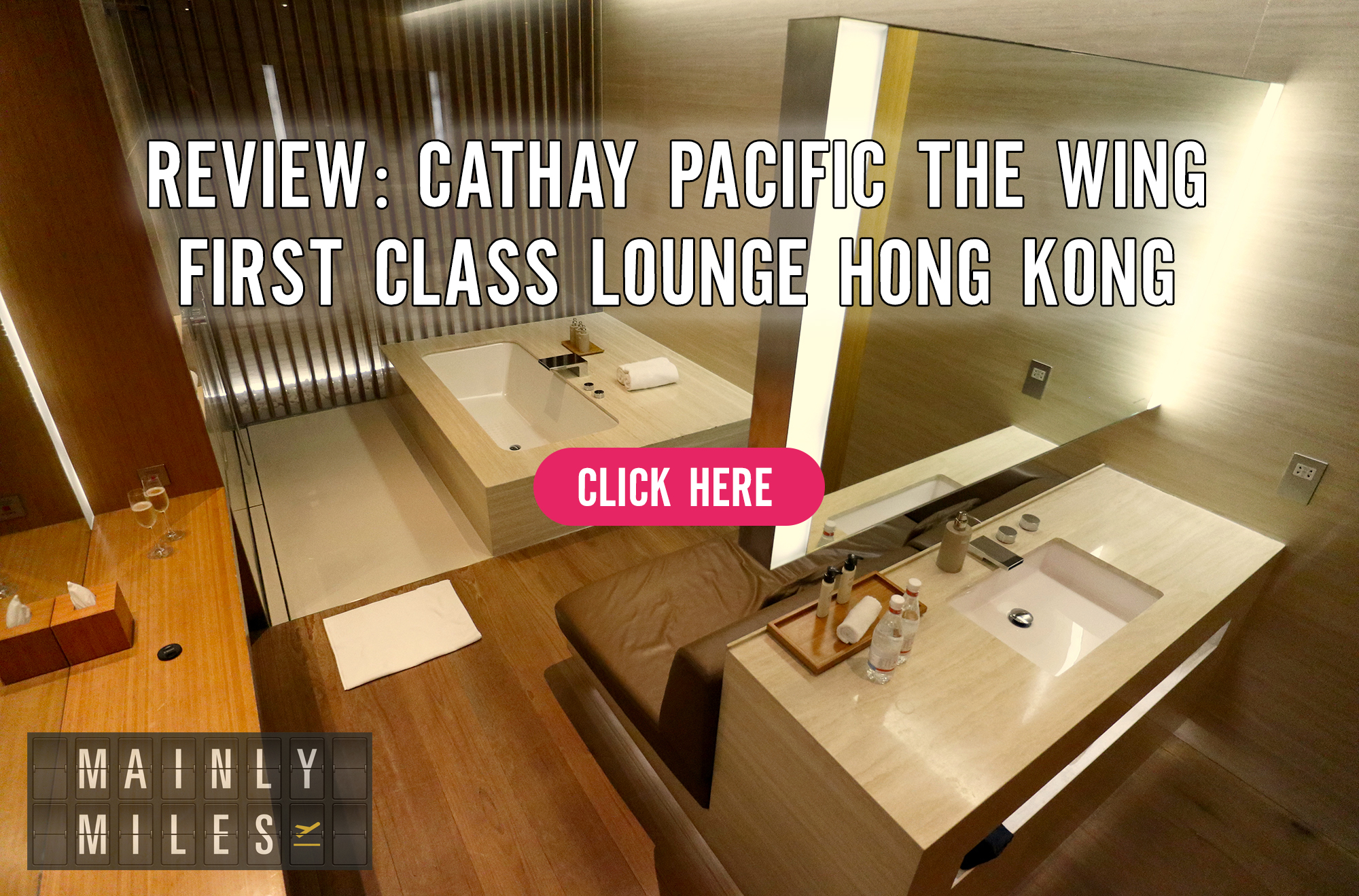 Click here to read our review of ‘The Wing’

Heading straight to The Pier is another option, however you may then have a long walk back to your gate if you are departing in the 1-28 range (see map above). There is a train available, though we find it doesn’t save a huge amount of time. 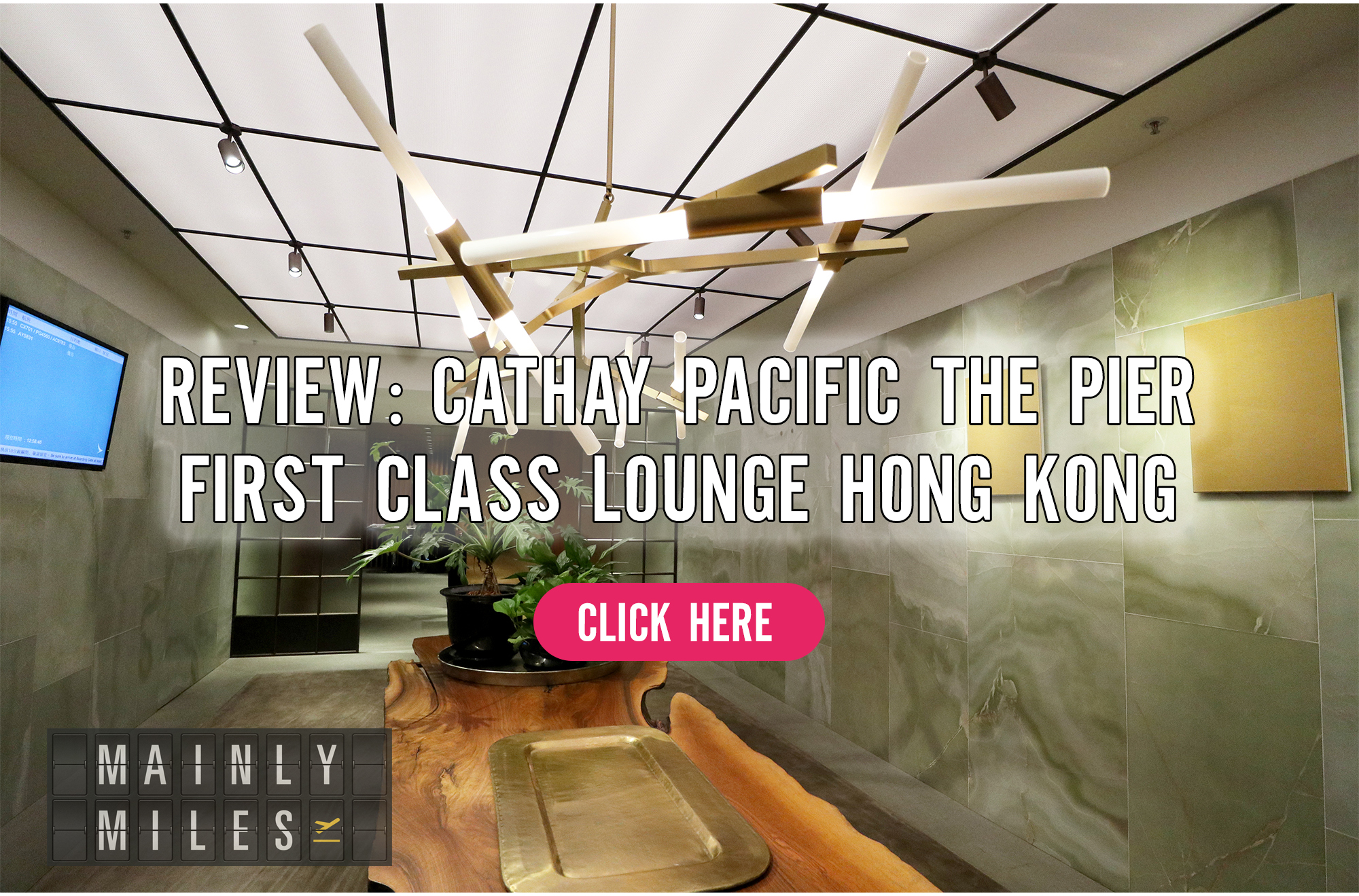 Click here to read our review of ‘The Pier’

Boarding commenced at 2.20pm and as we managed to be first on board, I went across to the right hand aisle to take a few photos of the other four First Class seats before returning to our ‘private aisle’ pair at 1A and 2A.

The two-row cabin is bright and airy, with no overhead lockers. However there is a crew rest compartment in the forward ceiling, reducing the height slightly.

The middle ‘D’ seats have a seat-height wall to the left side, shielding them from the left aisle, with a long opaque ‘window’ for some natural light to shine through from the actual windows during the daytime.

I wouldn’t personally choose a middle seat as a first preference, however the space remains very private and the seat is angled away from the aisle. It is also staggered slightly behind the ‘K’ window seat on the right in each case, which itself is angled towards the window, further enhancing privacy.

As a couple we would strongly recommend seats 1A and 2A in First Class on the Cathay Pacific 777-300ER. That’s because these two seats have an aisle all to themselves, with the other four seats in this cabin (1D/K and 2 D/K) using the right hand aisle.

Foot traffic is very low on the left side and therefore this feels almost like your own private cabin.

One issue you may face with this is that seat 2A is a designated bassinet position in this cabin, and is therefore not available for advance selection (assuming you are not travelling with an infant).

You will have to call Cathay Pacific and ask to be assigned this seat. Provided it is still available they will do this for you, with the usual caveat that if a booking with an infant included is then made in First Class on your flight you might be relocated. With a total of only six seats in Cathay First, and another bassinet position available at seat 2K, this is a very slim chance indeed.

Eddie took seat 1A and I went for 2A. The first thing to note about the window seats in this cabin is that they all benefit from having three windows – no one is short changed here.

The space around the seat strikes you right away – it’s immense. Sure we had just come off the new Singapore Airlines A380 Suites a couple of days before, but along with the new (and rare) Emirates 777 Suites that’s in a league of its own in floorspace terms.

There’s also an ottoman, which may look small in the pictures but is probably bigger than an Economy Class seat!

A fold-down armrest is located alongside the seat to cater for the sheer width of the seat. Similar to the bolster cushion provided on the equally wide Singapore Airlines 2006 J seat, it allows you to sit comfortably when upright.

The crew came round to take our drinks order and we each went for a glass of Champagne. The beauty of the space available means it’s an obvious choice to take your pre-flight drinks together in a single ‘Suite’, so Eddie joined me in 2A. 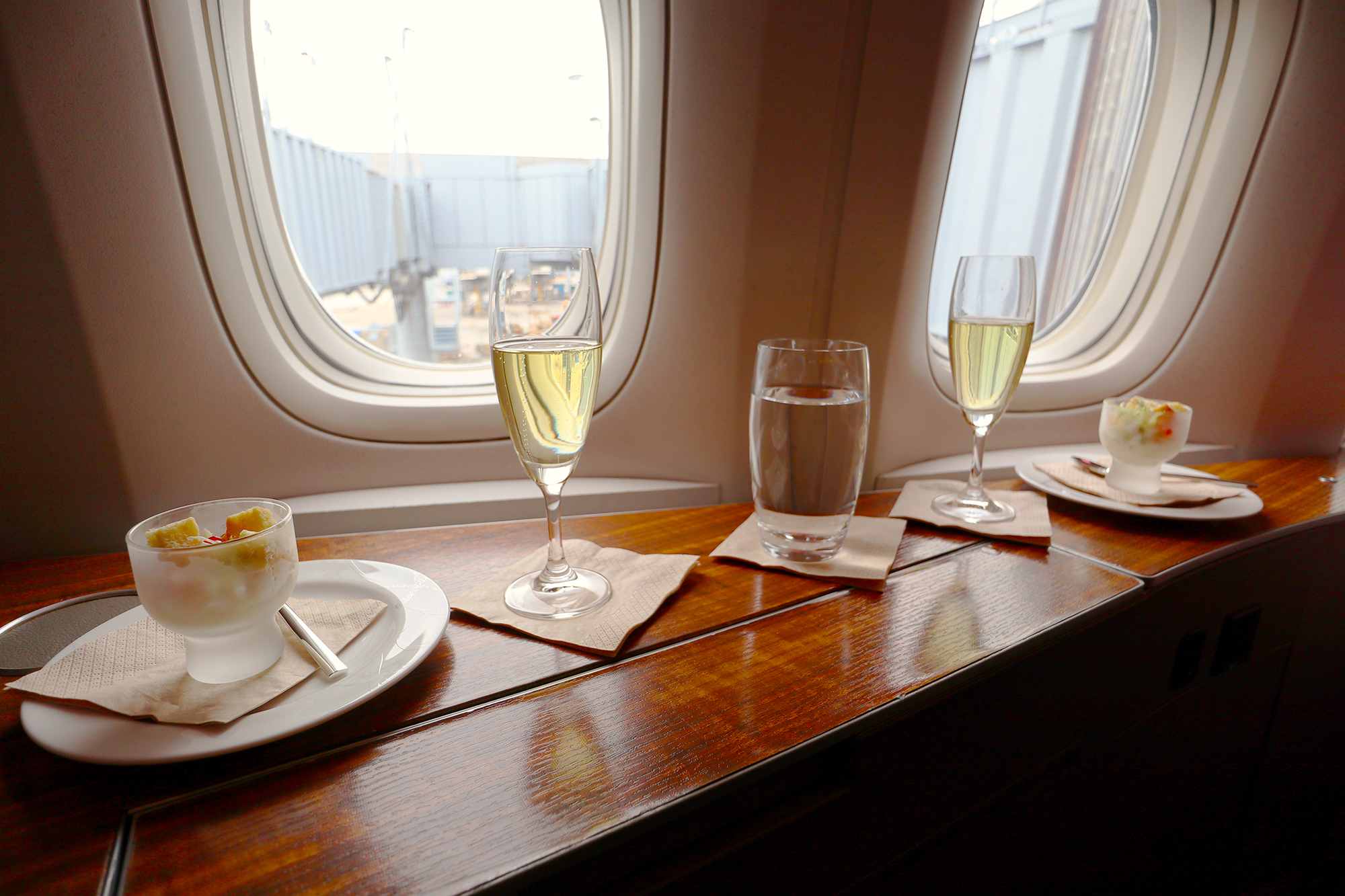 We were each also served with a crab meat amuse-bouche which was very tasty and a nice welcoming touch. Introduced to First Class in 2014, the amuse-bouche was withdrawn in 2017 amid some other cuts, however it seems to be back which is great. 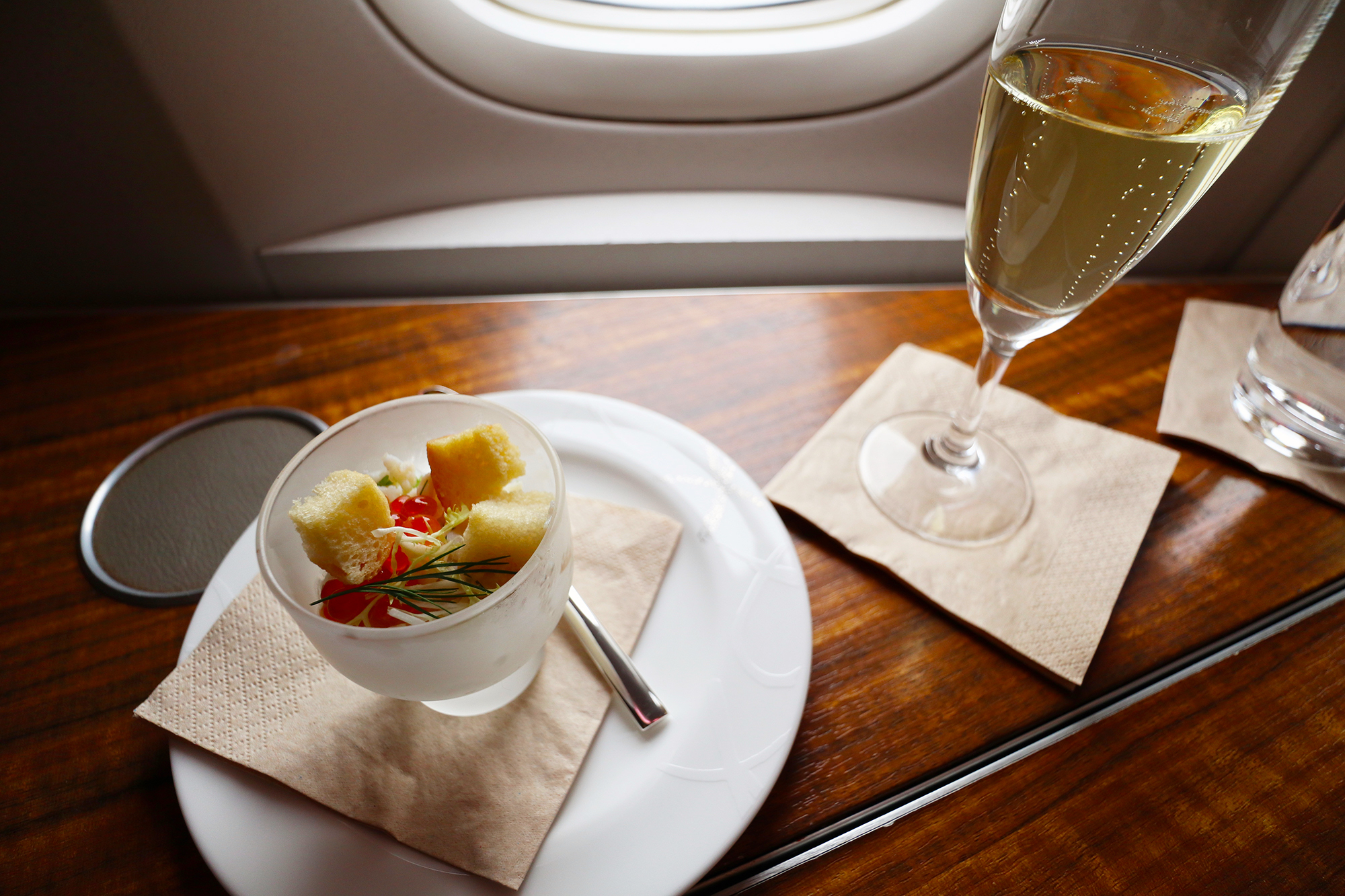 Hot towels were also provided. Pushback was postponed due to an air traffic control issue, and the crew came round to offer us a second glass of Champagne during the short 10-minute delay. 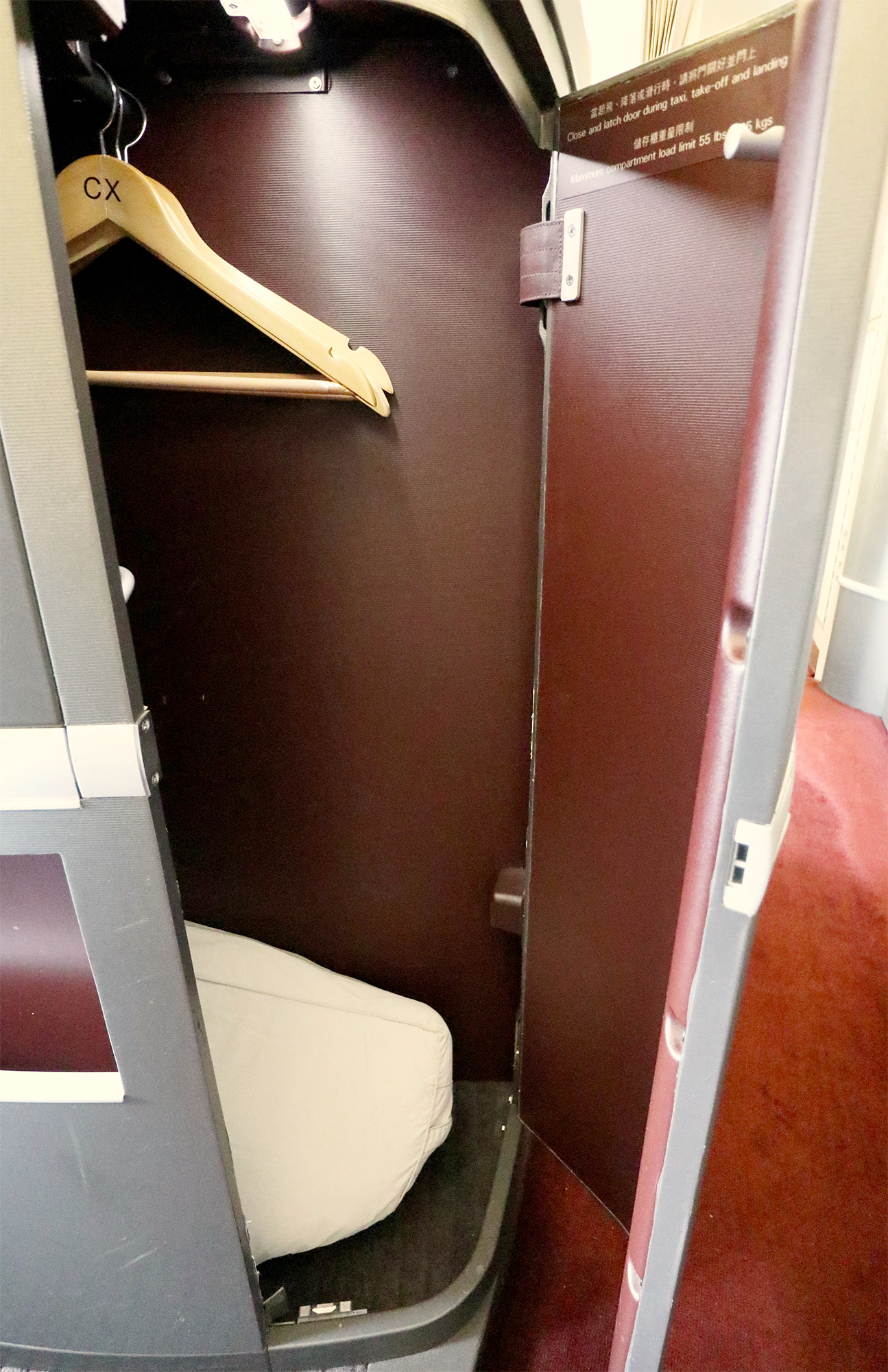 A large wardrobe is located to the side of the seat, where you enter from the aisle.

It is equipped with three hangers and an additional coat hook.

There is also plenty of room here for your carry on luggage, even if you have two carry on items. This of course is vital due to the lack of overhead lockers in the First Class cabin.

The storage of smaller carry on items is permitted below the ottoman even during taxi, take-off and landing. Perfect for quick access to essential items.

My large rucksack fit in the space under the ottoman with room to spare.

A further small cubby to the left of the seat is good for passports, phones and other small items.

Located beneath the IFE screen is an additional open storage area. It’s the perfect location to stow the pyjamas and amenity kits after they are handed out near the beginning of the flight. The space on the left side is larger than on the right, as you can see in the photo below.

As you may notice from some of the photos, the cabin on this older aircraft was starting to show some signs of wear and tear from a few years of use – however everything still worked.

The Cathay Pacific First Class seat has a multi-standard power socket, meaning it doesn’t really matter what kind of plug your device uses you will be able to keep its battery charged no problem without worrying about having the right adapter.

There is also a USB charging socket alongside – great for charging your mobile phone while also using the main socket for a larger device such as a laptop.

A large sturdy table folds out from the sideboard. It moves back and forth allowing for easy access to the seat, for example if you need to use the toilet halfway through dinner. An additional section can be added to facilitate buddy dining. The table has no vertical adjustment but we didn’t find this an issue.

The armrest is also sturdy enough to provide a more casual workspace if required, I found this quite a comfortable way to do some work.

After departure, the crew bring round Aesop amenity kits and pyjamas with a choice of size – Small, Medium or Large.

There’s a set of eye shades with the pyjamas, and if ear plugs are your thing you’ll find those in the amenity kit.

The kit was otherwise fairly basic for First Class, and also included: