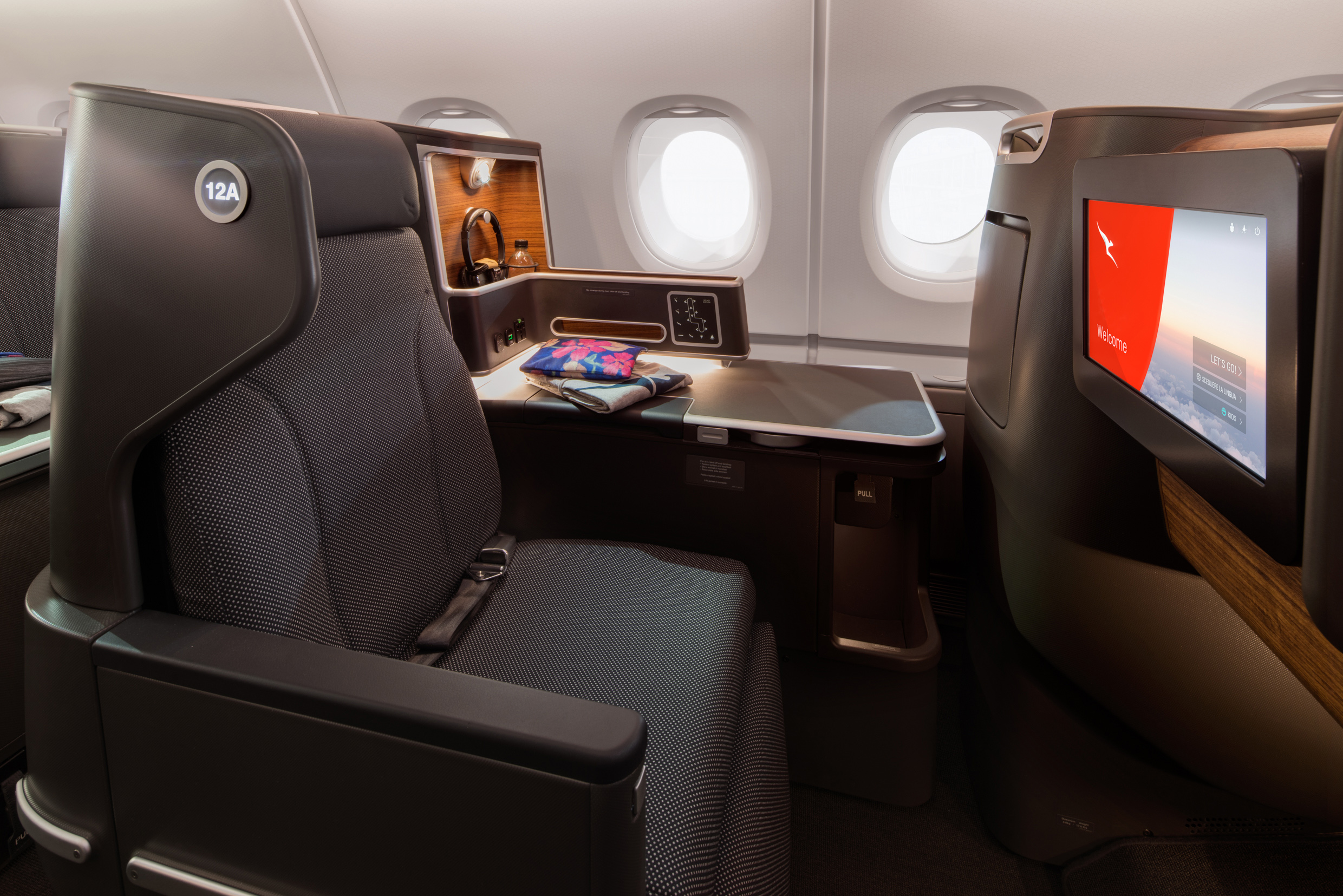 The first Qantas Airbus A380 to be refitted with the airline’s latest seat products, including a new upper deck passenger lounge, has now re-entered service. It will be progressively flying on the airline’s three superjumbo routes from Singapore starting with QF2 to Sydney this evening, 1st October 2019.

All 12 of the airline’s A380 fleet are due to have the upgraded cabins fitted by the end of 2020, for a consistent long-haul Business Class product across the airline.

The mid-life upgrade of these jets allows Qantas to keep the total capacity of the aircraft almost identical, but with a more premium-heavy configuration boasting additional seats in Business Class and Premium Economy.

It’s good news if you’re due to travel on one of the older aircraft over the next year or so and your flight is substituted for one with the new configuration, as that will mean more chance of an upgrade on flights booked close to capacity, especially for Economy Class passengers.

Let’s start by looking at the main enhancement on these newly refitted A380s, which is in the enlarged Business Class cabin.

Gone are the older Skybeds in a 2-2-2 configuration, replaced with the latest Thompson Vantage XL Business Class seats, also found on the airline’s Airbus A330s and Boeing 787s.

These seats provide direct aisle access for all passengers in a staggered, forward facing, 1-2-1 arrangement.

Like many Business Class seats offered today, they are ‘space efficient’ with your legs being accommodated under the console of the seat in front when in bed mode. This has allowed Qantas to up the Business Class seat count from 64 to 70 on these refitted aircraft, in the same physical cabin space.

More good news is that the press images appear to suggest that the large side storage compartments on the upper deck, including in the Business Class cabin, have not been removed. These are very useful, especially for storing your shoes, and provide a great deal of extra space for window seat passengers.

Singapore Airlines removed these compartments when it introduced its new Business Class cabin product on the A380.

Qantas promised a refresh of the 14 First Class seats on its refitted A380s, incorporating a larger high-definition IFE screen and re-cushioned seats with new contoured fabrics.

Seats now feature a cream leather headrest, the wood appears to have been replaced with a darker hue and a smart dark trim has been incorporated around the seat shell and privacy dividers.

The Qantas First Class product already had a soft refresh in late 2017 with new bedding, a pillow menu and memory foam mattress. We can attest to the comfort of the bed having tried it in March 2018 between Sydney and Singapore, see our full review to get an idea about the Qantas A380 First Class experience. 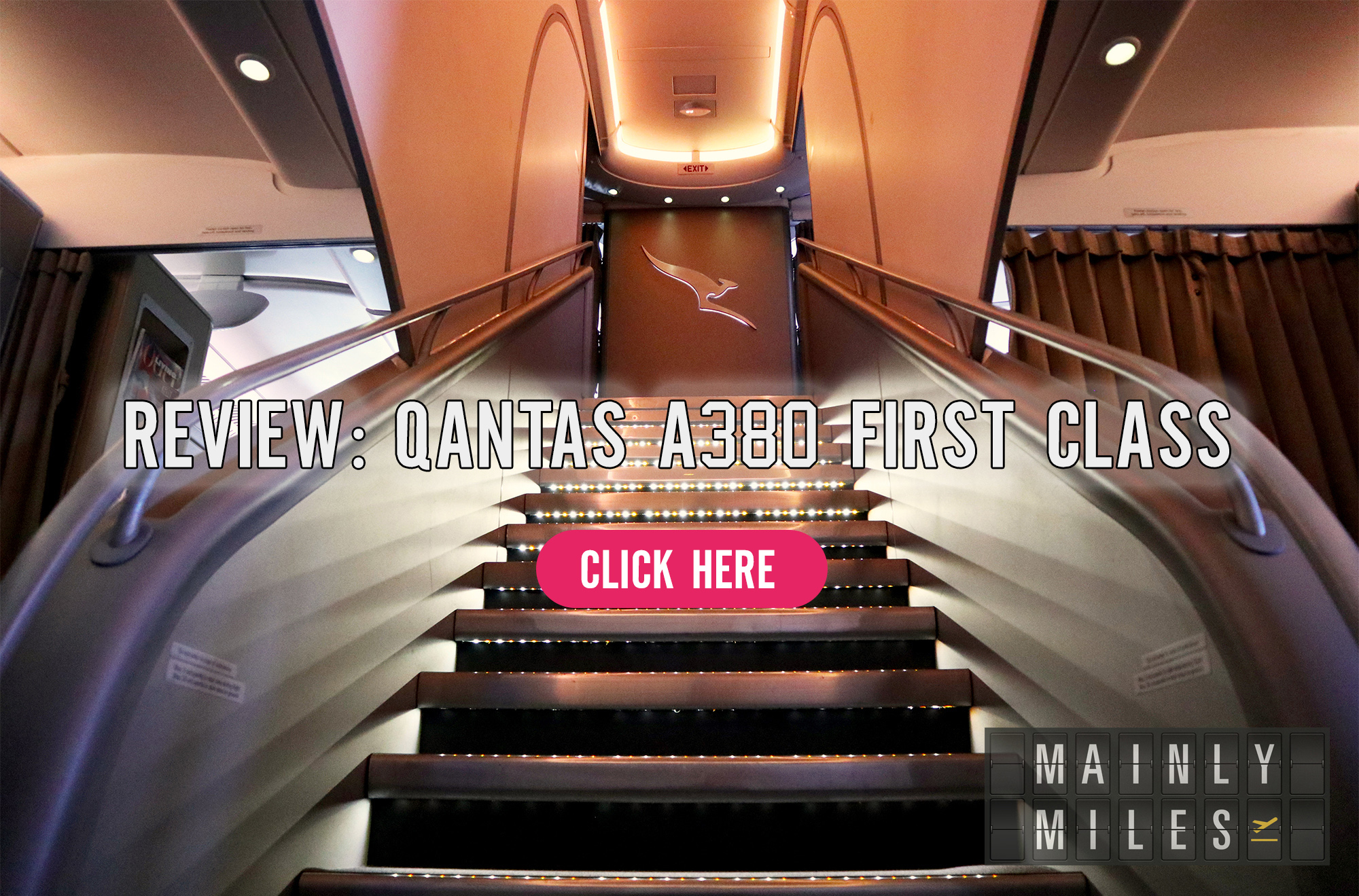 Another major part of the cabin upgrade is a redesigned upper deck passenger lounge by creative designer David Caon, for First and Business Class passengers to dine and relax.

This lounge, located where Singapore Airlines fits its large Suites lavatories on the newer and refitted A380s and where Emirates offers shower suites, now provides a seating area for 10 passengers.

Two tables on the right side of the aircraft are set up for dining in a booth format, while on the left side the space is better suited for drinks and light snacks with a smaller table and more sociable L-shaped sofa arrangement.

The top of the staircase has been opened up at the sides for a feeling of increased space, a nice touch as these ‘corridors’ could feel a little claustrophobic otherwise.

A bar area remains in its former location for self-serve drinks and snacks.

Qantas has promised more details of the onboard service on these newly fitted jets at a hangar event in Sydney on 2nd October 2019, and it will be interesting to see what they will offer regarding the dining options in the upper deck lounge.

The remainder of the aircraft’s upper deck is dedicated to the enlarged Premium Economy cabin, with a total of 60 seats made possible through removal of the small Economy Class section in this area and deactivation of the final set of exit doors on this level.

The seats themselves are in a 2-3-2 configuration, with 18 ‘couple pair’ options. As with Business Class, the A and K seats benefit from the large side storage compartments. Those familiar with the Premium Economy cabin on the Qantas Boeing 787 will feel immediately at home here – as the same seat design is being used.

On the main deck behind the First Class section the Economy Class cabin remains largely unchanged, with the exception of new cushioning, fabrics and a revised colour scheme. There is also a self-service snack bar and an enhanced, faster inflight entertainment system.

Of course there is no longer any Economy Class option on the upper deck, which was a popular choice among many.