Skip to content
Changi's most anticipated new airline lounge of the year is officially open, and it sure looks the part 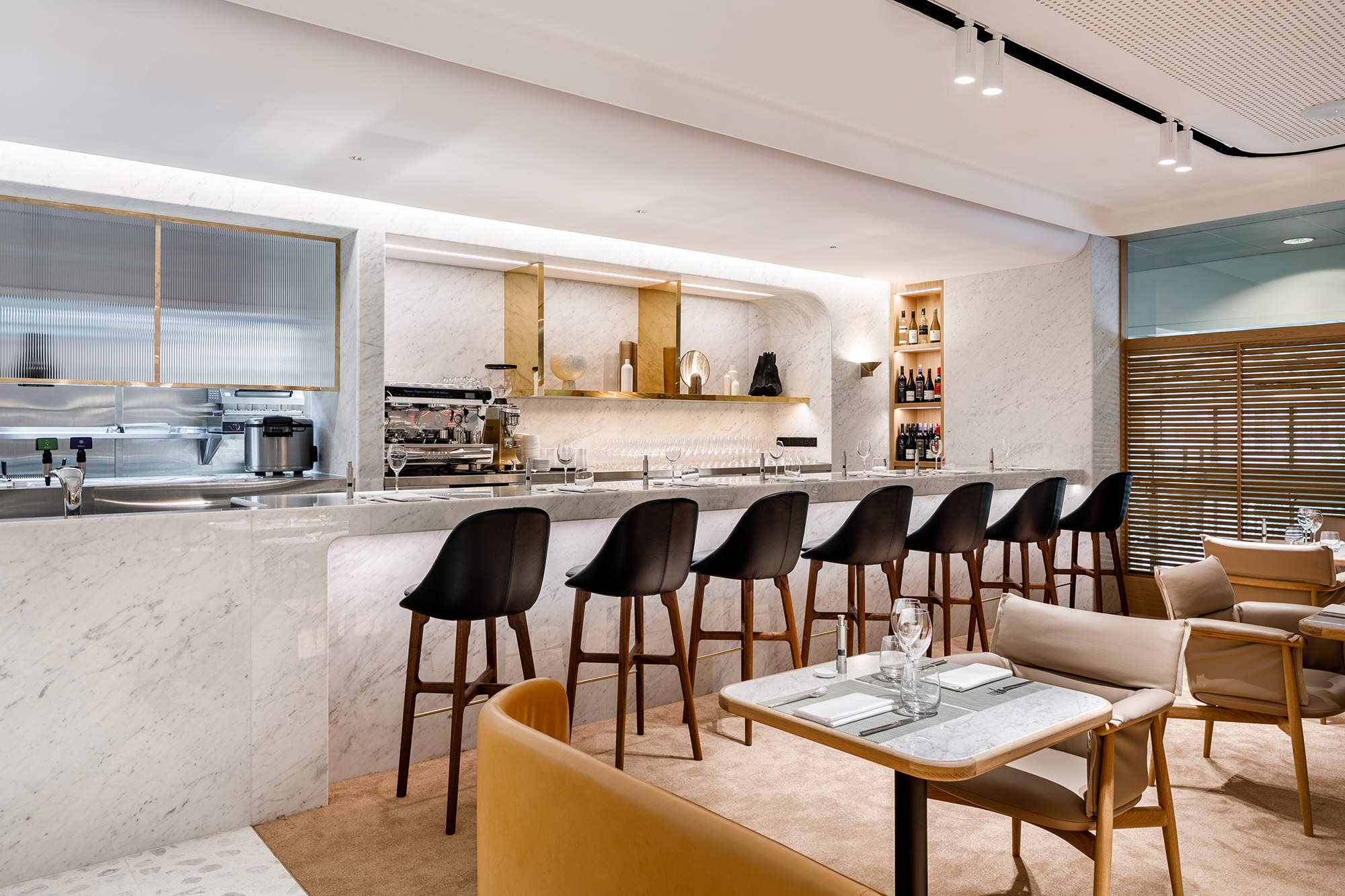 Qantas has formally opened its newest dedicated First Lounge, the fourth on its global network, at Singapore Changi Airport Terminal 1. While the lounge has been available since its ‘soft opening’ on 18th November 2019, staff worked to perfect the service for selected guests over a couple of weeks and 2nd December 2019 was the official launch, led by Qantas CEO Alan Joyce.

The Qantas Singapore First Lounge caters for Qantas First Class passengers, departing on one of three daily Airbus A380 flights to London, Sydney or Melbourne, plus the airline’s platinum frequent flyers and oneworld Emerald status holders.

Design was by David Caon, who was also responsible for the airline’s Singapore Business Lounge and some of its latest cabin updates.

Caon worked in collaboration with Kelvin Ho of Sydney-based architecture and design firm Akin Atelie on this project, which according to Qantas “features a number of Singaporean influences across the look and feel of the lounge”.

At over 1,000 square metres, the footprint is less than half that of the nearby Qantas Singapore Business Lounge, however there is still capacity for 240 customers.

Speaking of the existing Business Lounge, the opening of its First Class counterpart is welcome news for those who frequent the former facility, which can suffer from significant crowds during the busy evening peak departure period.

The lounge is managed by Sofitel, in common with the airline’s First Class facilities in Sydney, Melbourne and Los Angeles, and also with the nearby Qantas Singapore Business Lounge.

The lounge is a relatively narrow design, structured along a single corridor leading to the various sections.

As you can see a large area is set aside for dining.

Neil Perry of Rockpool Consulting, co-owner and executive chef at several Australian restaurants, is Creative Director of Food, Beverage and Service for Qantas, responsible for developing the restaurant experience in the new Singapore First Lounge.

There are no fewer than ten items on the all day dining menu, including the signature Qantas First Lounge salt and pepper squid with green chilli dipping sauce and aioli.

Asian tastes are catered for with dishes such as crayfish laksa with rice noodles, bean spouts and egg, and stir fried black pepper beef, served with onion, red capsicum and jasmine rice.

Options like poached eggs with mushrooms and salsa verde on sourdough nod to the fact that despite afternoon and evening opening hours, not everyone using the lounge will be on the same time zone. Perry explains:

“Customers visit the First Lounge at different stages of their trip, so we included items like poached eggs with mushrooms and salsa verde on sourdough and First Lounge classics like the chicken club sandwich with salt and pepper squid, intended to cater to our customer and their taste buds regardless of where they are on their journey” Neil Perry

The full dining menu, which will incorporate seasonal changes throughout the year, is available below. 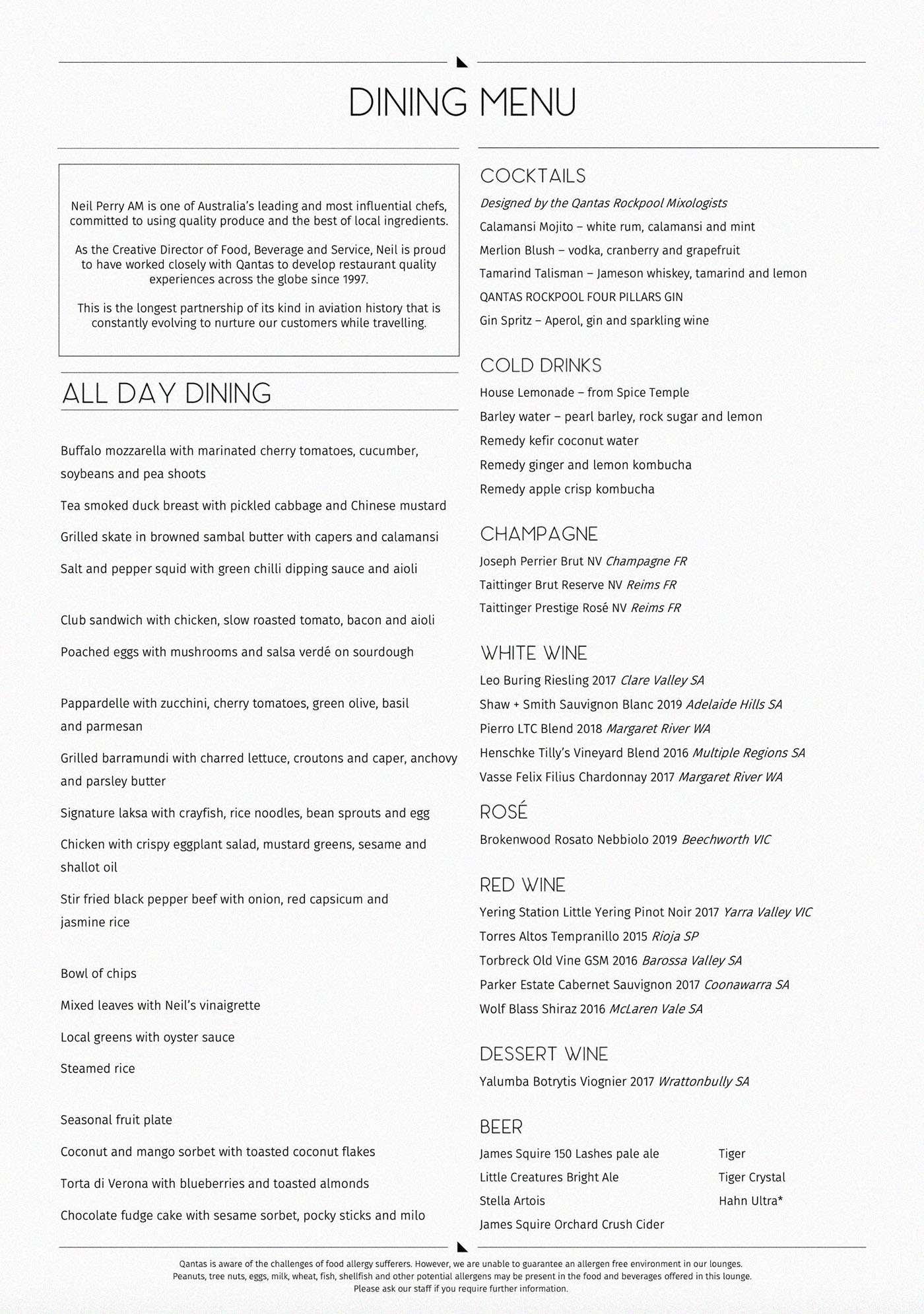 A tended cocktail bar serves up a menu designed by Qantas Rockpool Mixologists, but the bartenders will also go ‘off-piste’ if you have a particular request in mind.

Specialities include the Calamansi Mojito, which Qantas says is the most popular cocktail served at their Singapore Lounge, and a ‘Merlion Blush’ – with vodka, cranberry and grapefruit.

Five white wines and five red wines are all from Australia, as you’d expect.

There is also a small bar area near the open kitchen, with bar stool seating for those who prefer it.

There are nine shower suites in total, including one oversized / wheelchair accessible suite.

The tiling is something to behold! An adjustable skylight effect allows you to customise the lighting to the best time of day to suit your body clock.

Toiletries are by LaGaia Unedited, the new provider for Qantas’ First Class amenity kits, First Lounges and the Sydney and Melbourne Spas launched concurrently with the airline’s new A380 cabin products last month.

One specific area has an artificial skylight, again a testament to how Qantas and the designer have prioritised jet-lag reduction where possible, especially for those flying all the way to or from London on the QF1/2 flights.

There are a couple of workstations with printers, a communal workspace or those individual high chairs we spoke about with privacy dividers. That’s should be a sufficient array of options to suit the needs of most modern business travellers without the need for a dedicated ‘business centre’.

Provided your journey through Changi coincides with the 2.30pm to midnight opening hours, you’ll be welcome to use this lounge if you’re travelling on a departing flight and meet one of the following requirements:

Flying on a Qantas or Emirates flight, or on a oneworld member operated flight:

Eligible lounge users may also be entitled to a guest allowance, the full policy is available here.

To maximise your experience, you may want to take advantage of Changi’s Early Check-in option. If you’re flying Qantas, for example, you can drop your bags and collect your boarding cards up to 12 hours before your flight departure time at either T1 or the new Jewel facility.

Qantas has been expanding capacity on its routes to and from Asia, especially at Singapore which is now its largest overseas hub with 59 weekly departures to five destinations.

Changi’s position was well cemented since the airline brought the Sydney to London ‘kangaroo route’ back through the Lion City in early 2018, also upgauging Melbourne flights to the A380, reintroducing wide-body A330s to Perth and increasing frequencies on the Sydney route.

Alan Joyce mentioned that this new lounge is a reflection of the airline’s extensive premium investment in the region.

“Since our A380 flights have returned to Singapore, we’ve seen an increase in demand for premium travel which has also translated to an increase in the number of travellers enjoying our lounge hospitality.

“This is our fourth Qantas First Lounge, and each time we build an entire new lounge facility from scratch, we speak to our frequent flyers to get a better understanding of how customers like to spend their time in the lounge and tailor it accordingly. Our customers told us thei