Skip to content
Previously only available for advance selection by PPS Club members, SIA's 'Solo Seats' on A350 ULR flights are now available for US$140 per flight 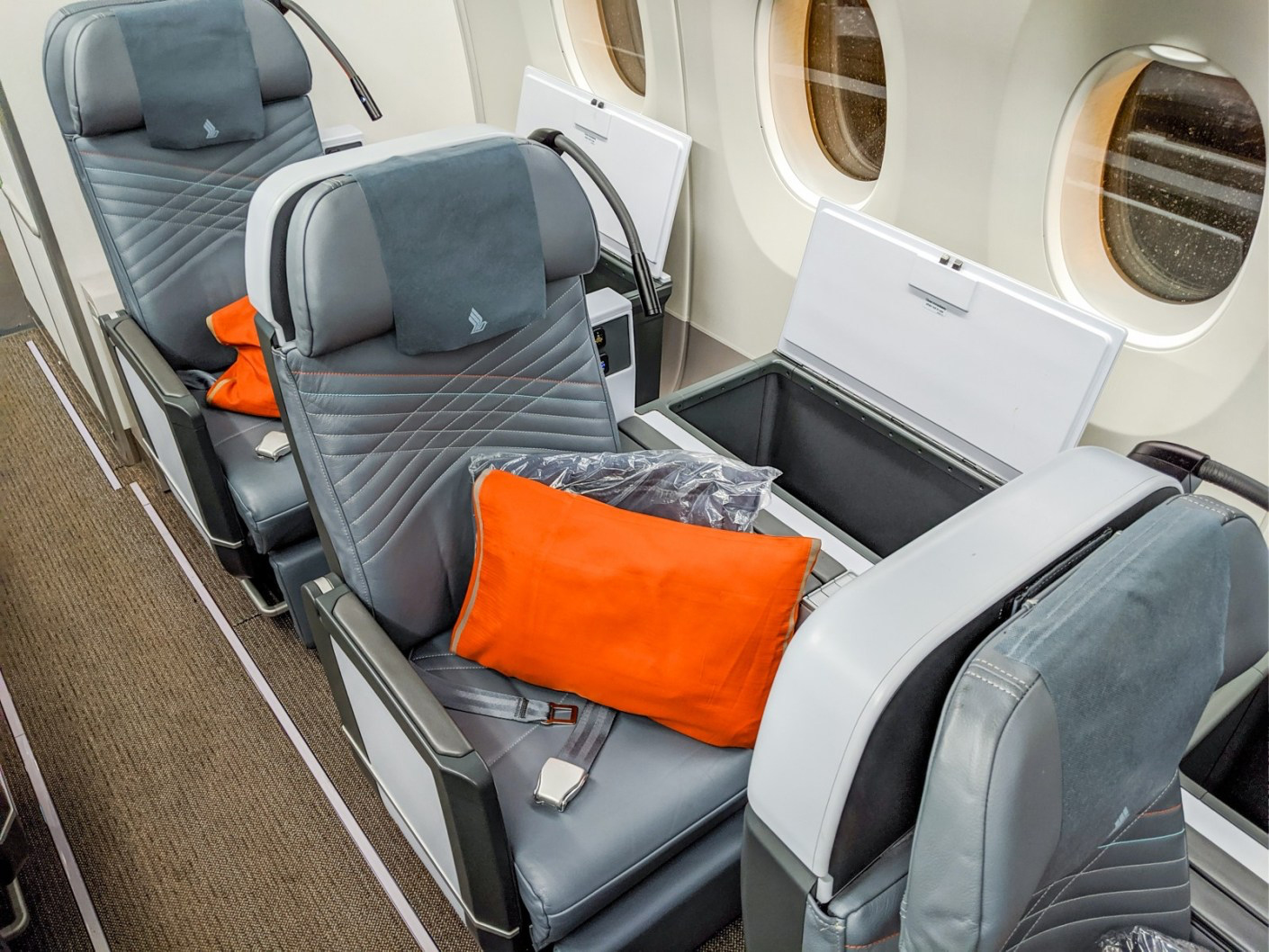 Back in August 2019 we reported how Singapore Airlines had started blocking the six Solo Seats at the back of the Premium Economy cabin on its Airbus A350 ULR aircraft for advance selection only by PPS Club members, with other passengers left to chance their luck at online check-in 48 hours before departure time.

From 1st March 2020 the airline has started to allow selection of these Solo Seats by all Premium Economy passengers, for an additional fee of US$140 per sector (US$20 more than it is charging for the four Extra Legroom seats at the front of the Premium Economy cabin).

PPS Club members will continue to be able to select these seats for free, and KrisFlyer members get between 5% and 15% off depending on their status tier.

When Singapore Airlines revealed the seat map for its upcoming Airbus A350 ULR aircraft in May 2018, we were left somewhat puzzled about the six missing window seats in the final three rows of the cabin. 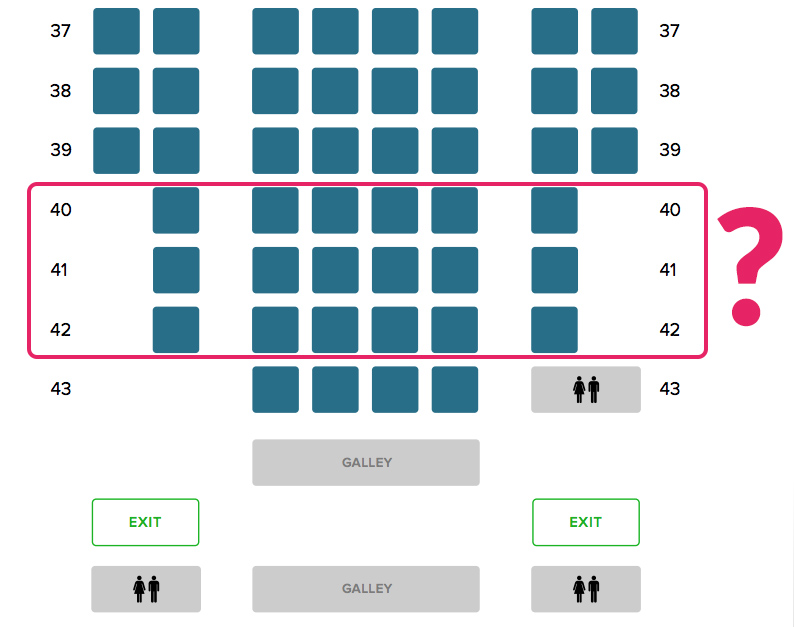 In fact it later transpired that the usual overhead lockers in the middle of the cabin at this rear section had to make way for an additional overhead crew rest compartment.

It means passengers in the four D/E/F/G seats need to use the overhead lockers at each side of the cabin to store their belongings, so the solution was to install a floor-level storage locker where the window seat would have been located at these rows to ensure those passengers had sufficient storage too.

With the mystery solved, in June 2018 The Points Guy took a trip to Zodiac Aerospace in Texas, where the seats are manufactured, to see how they looked in the flesh.

Despite being aligned with the aisle, rather than against the window, the privacy of an individual seat plus a large storage bin that doubled up as a useful place to stow your items when closed meant these would surely become the most sought after seats on the aircraft in Premium Economy.

There is also additional floor stowage between your feet and the window, ahead of the storage bin alongside the universal power point, making it the perfect place to keep a laptop on charge for example.

Of course one of the most important aspects of these seats is that you’ll have unimpeded direct aisle access; no one to climb over to reach the aisle and no one climbing over you to do the same.

The six seats you need for this experience are:

Singapore Airlines now advertises the Solo Seats with “more space, greater privacy, plus an extra compartment with generous stowage – so you can keep everything within reach”. 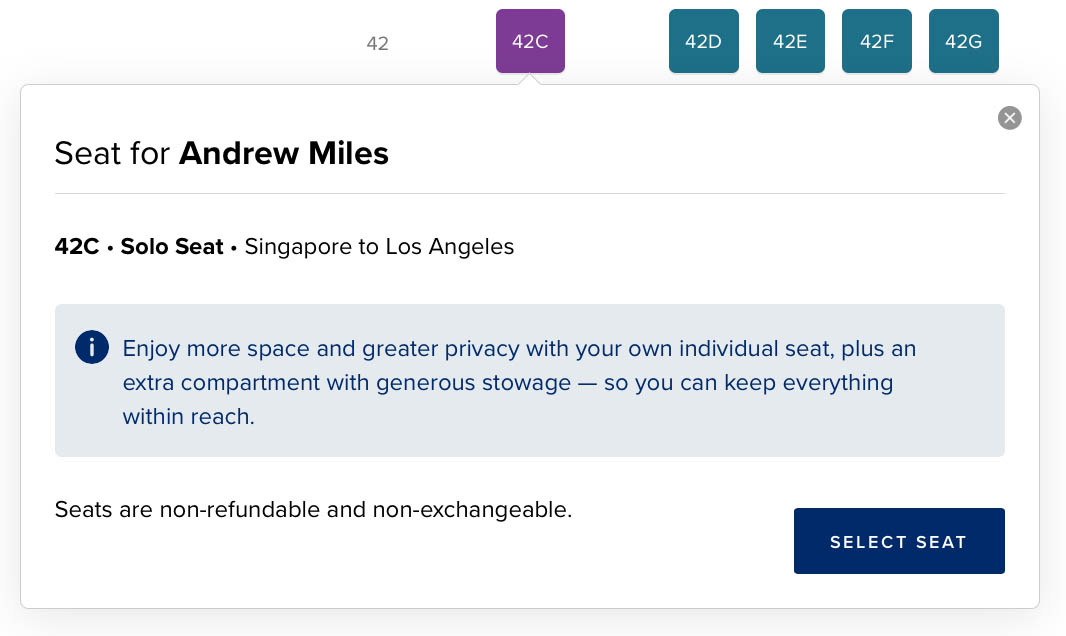 When we first saw these seats in June 2018 we said “Singapore Airlines will be charging extra for them before long“. Well it took them nearly two years, but finally they have started to do so.

Since 1st March 2020, you’ll pay an extra US$140 per flight on the A350 ULR to secure one of these Solo Seats, with that amount converting into local currency on the day of selection / payment if you’re paying in using other currencies (at the time of writing, it’s equivalent to S$195.40).

It doesn’t matter whether you purchase a Premium Economy Lite, Standard or Flexi fare, the additional charge for a Solo Seat remains the same (as it does for an Extra Legroom seat).

As we noted earlier today, KrisFlyer members will get a discount on the fee payable, whether redeeming or booking with cash, as follows:

That’s a nice discount of US$21 (around S$29) per flight for KrisFlyer Gold members, whose travelling companions on the same booking still get a 10% discount even if they are not KrisFlyer members at all.

Joining KrisFlyer is free, so there should be no reason to pay the full rate for these Solo Seats since even basic members get a discount when reserving them.

Pro Tip: This does not prevent you from changing the frequent flyer programme (FFP) you wish to credit the miles from your paid flight towards later, simply change the FFP on your booking after paying for your seat selection.

PPS Club members, whether principal or supplementary cardholders, still get Solo Seats for free, however their non-PPS Club travel companions on the same booking will have to pay the US$140 fee per sector, or the applicable discounted rate shown above if they are KrisFlyer members.

The same policy applies for PPS Club members selecting Extra Legroom seats in the Premium Economy cabin, however in this case travelling companions get 15% off the usual rates even if they are not KrisFlyer members.

Note: KrisFlyer Elite Silver and Elite Gold members receive no complimentary Extra Legroom or Solo Seat benefits in the Premium Economy cabin, but as mentioned they do now get a 5-15% discount on the fees payable.

Once online check-in opens, which happens exactly 48 hours before departure time on SIA’s non-stop USA flights, additional premium seat selection costs are cancelled and any passenger can select any available seat for free within their cabin class.

That means there’s still a chance to secure one of these six coveted seats for nothing, however we recommend logging on to the manage booking portal exactly 48 hours before your flight departure time if you want to try and do this, as we expect any available seats to disappear quickly – especially thee Solo Seats.

Singapore Airlines’ A350 ULRs are currently flying the following flights:

* Note that the Daily SQ31/32 A350 flight to and from San Francisco is operated by a regular 3-class A350. Only the three times weekly SQ33/34 has the ULR configuration.

That means from late October it’s Newark, Los Angeles and ‘some other flight’ that will have the ULR aircraft deployed.

Any seats to avoid?

It’s worth noting that the rearmost Solo Seat on the right side, 42H, is directly in front of one of the three Premium Economy Class toilets.

There is likely to be heavy foot traffic and noise during the flight in this area (remember there are 94 Premium Economy Class seats in total on these aircraft, so over 30 Premium Economy customers are using this one facility on a full flight).

Stick to the left aisle if you can (C seats), as there is no toilet in the same location on that side, or alternatively sit as far forward as possible (40H and 41H are probably ok).

If you’re not a PPS Club member and you managed to have one of these solo seats allocated for a forthcoming flight before August 2019 when the blocking first started to apply – don’t worry you aren’t about to be kicked out of it.

It’s important not to change your seat now, as you may then be unable to reallocate it, but any selection made before the policy changed in August 2019 should remain safe.

PPS Club members themselves needn’t worry – their allocations are also safe and they are free to change their selections as they please.

If you are interested in taking one of these long-haul flights in Premium Economy, be sure to check the cash fares before exploring redemption availability. Even with the typical 30% off Spontaneous Escapes offers for last minute redemptions, it still often makes sense on these flights to just use cash in this cabin.

Here’s how prices look in September 2020:

If you’re able to book in advance, you can pick up a non-stop return flight in Premium Economy on SIA’s A350 ULRs for around S$1,500. That isn’t a coronavirus issue by the way, off-season flights on these routes in Premium Economy have basically always been on fire sale at similar levels since day one.

Assuming you don’t want to fork our close to S$200 each way for the privilege of sitting in one of these seats, then you’ll need to check the seat map when online check-in opens, exactly 48 hours before your flight departure, for the best chance to secure one of them.

There’s one negative aspect of the new policy – last minute (but more than 48h before) PPS Club member bookings in this cabin might not get the option of a Solo Seat anymore if they have all been reserved by other passengers who paid a fee.

Under the previous system from August 2019 to February 2020, these members were almost certain to get a Solo Seat since they were the only ones eligible to select them outside the online check-in window.

Overall though we think most people will appreciate the security of being able to guarantee one of these spacious, private seats with (rare) direct aisle access well in advance, and KrisFlyer members of any status tier do get a small discount on the selection fee.