Skip to content
A few tweaks on the whole to the SIA Premium Economy seat, with the new 'solo seat' concept revealed. 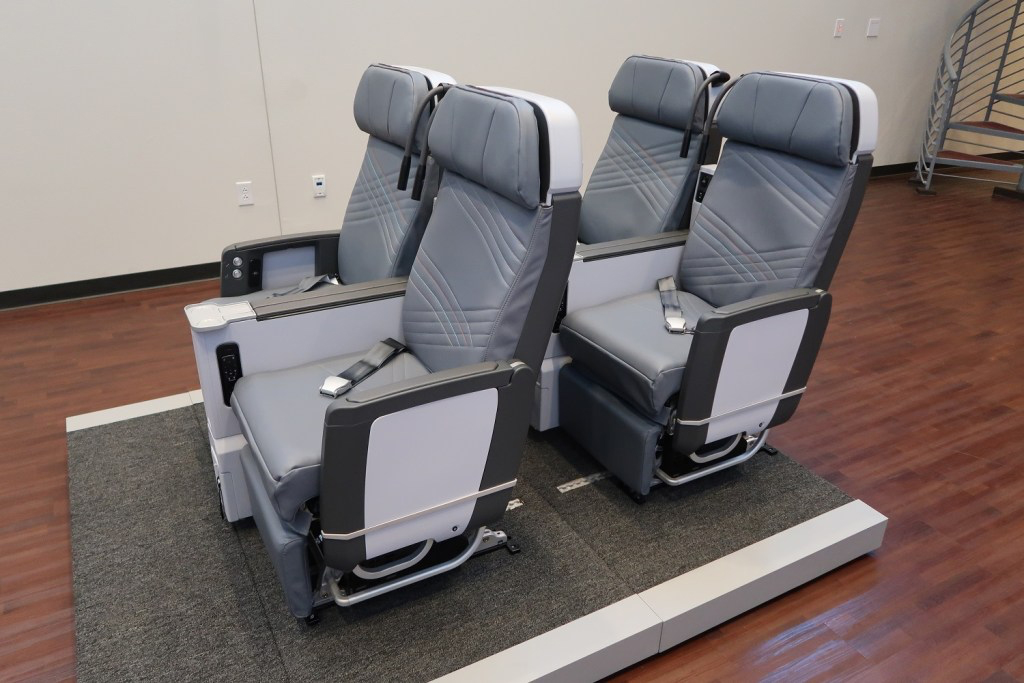 One of the more unusual things we noticed about the A350ULR seat map when it was released on Thursday this week was the arrangement of the last three or four rows in the Premium Economy cabin, right at the back of the plane.

Here the seating arrangement changed from the standard 2-4-2 layout to a rather unusual (and possibly unique) 1-4-1 layout. It means passengers flying solo in this cabin should choose one of these window seats in the rearmost rows to enjoy their own dedicated single seat with both a window and direct aisle access to boot, usually the preserve of business class.

Well aside from confirming how these single seats will look, The Points Guy yesterday joined a media tour arranged by Singapore Airlines of the Zodiac facility in Texas where these seats are manufactured. There they revealed a few other enhancements for the A350ULR Premium Economy seats we didn’t previously know about.

You can take a look at the full article written by The Points Guy here.

Though it’s heavily based on the existing A350 Premium Economy seat, according to The Points Guy the seat enhancements include:

The tray table is the only other major change, now a single piece rather than a bi-folding one to save weight. Potentially that will make it more difficult to get in and out of your seat during meal times.

The obvious choice for solo travellers will be difficult to secure on the A350ULR with just six of these individual seats at the back of the plane. Not only do you get a more private seat to yourself here but there is a large storage compartment to your side (a huge one in fact, though it’s not clear how much of the space will be available).

You should also get a decent amount of floor space to the side, ahead of the storage compartment itself.

It looks to us as though this is destined to be a ‘C’ seat on the left side of the aircraft and therefore the storage compartment is located between your seat and the window. That’s how it’s effectively depicted on the Singapore Airlines seat map, as an aisle seat. Equally though it could be an ‘H’ seat on the right side which would put the storage console between the aisle and the seat, with the seat itself directly alongside the window.

We can’t find anywhere that’s been confirmed yet.

We took a look on ExpertFlyer and found these seats are already becoming pretty popular on the initial Newark services. Unsurprising as the airline is not currently charging extra for these, nor are they blocked for PPS members.

A serious question is why have they done this to the seats at the back? Unlike many other wide-body aircraft the A350 fuselage only begins narrow at the back just before the rear toilets ahead of the rearmost passenger exits. Indeed Singapore Airlines’ current A350s feature a 3-3-3 layout in economy right to the last row.

Even if fuselage narrowing did require this in Premium Economy it would only affect the last row in our view, and a 2-3-2 configuration there would have easily been sufficient. Here two seats have been removed at each of the last three rows, which seems like serious overkill.

This set of six solo seats therefore seems to be a quite deliberate effort on the part of Singapore Airlines to add an additional comfort and storage option for solo travellers. We think they may therefore try to monetise these seats at a later date like they do with extra legroom seats in Premium Economy.

Note: We now understand this relates to the additional cabin crew rest area in the ceiling at the middle of the rear cabin section, meaning there are no overhead lockers in the middle section of the last few rows of the A350-900ULR.

The solution to this lack of storage space appears to be the large storage bin for the window passengers, where a seat would normally be located. Those seated in the middle seats at these rows will therefore use the overhead lockers at the side of the cabin, while passengers in the solo seats will be directed to use their own stowage compartment at seat / floor level.

Some subtle changes here and the proof will be in the experience of sitting in this seat for 19 hours, a prospect we certainly wouldn’t relish ourselves.

The solo seats look great with ample side storage. They also seem completely unnecessary which leads us to conclude that Singapore Airlines will be charging extra for them before long, so pick them while you can if you’re flying in this cabin on the Newark route.

Hat-tip to The Points Guy for the information and the photos.