Skip to content
This month Singapore Airlines confirmed four of its oldest 777-300ERs have been retired, while 737-8 MAX aircraft and more efficient wide-body jets will continue to arrive in the year ahead.

This month the most significant news about the Singapore Airlines fleet has been the revelation that four older Boeing 777-300ERs have been retired from service, in continued response to the impact of the COVID-19 pandemic on SIA’s fortunes.

Meanwhile it has been confirmed that a large boost to the fleet over the current financial year will arise from not only the six Boeing 737-8 MAX aircraft moving across from SilkAir, but a further eight of the type currently stored in the USA under Boeing’s care.

This will boost the MAX fleet to 14 by March 2022, though it’s not yet clear when the type will be cleared to operate again in Singapore, nor whether all 14 would be brought into passenger service immediately as they are delivered.

The troubled Boeing 737 MAX 8, now cleared to fly in many countries but still awaiting approval here in Singapore, will also eventually replace the older 737-800s, and the first two to receive the SIA colour scheme and new cabin products have now been rolled out of the hangar.

Meanwhile the wide-body fleet renewal process is set to continue, with more Airbus A350s and Boeing 787-10s confirmed for delivery this year.

Here are the Singapore Airlines passenger fleet totals at 31st May 2021.

The official registered aircraft data in combination with recent retirement announcements and analysis of actual flight movements over the last few weeks allows us to determine the actual ‘in service’ fleet (available to the airline) of 114 planes at 31st May 2021, 89 of which were recently active.

Additionally, four newly announced Boeing 777-300ER retirements and all currently registered Boeing 737-8 MAX aircraft, which are awaiting re-certification, are excluded from the ‘In Service’ column.

Almost all Airbus A350s and Boeing 787-10s remain in consistent use, alongside the nine recent Boeing 737-800 deliveries, while the deployment of Boeing 777-300ERs has risen to 52% of that fleet, now that we know only 23 of the aircraft will return to service.

Overall the airline was actively using a total of 89 aircraft in May 2021, its highest total since the COVID-19 pandemic began. 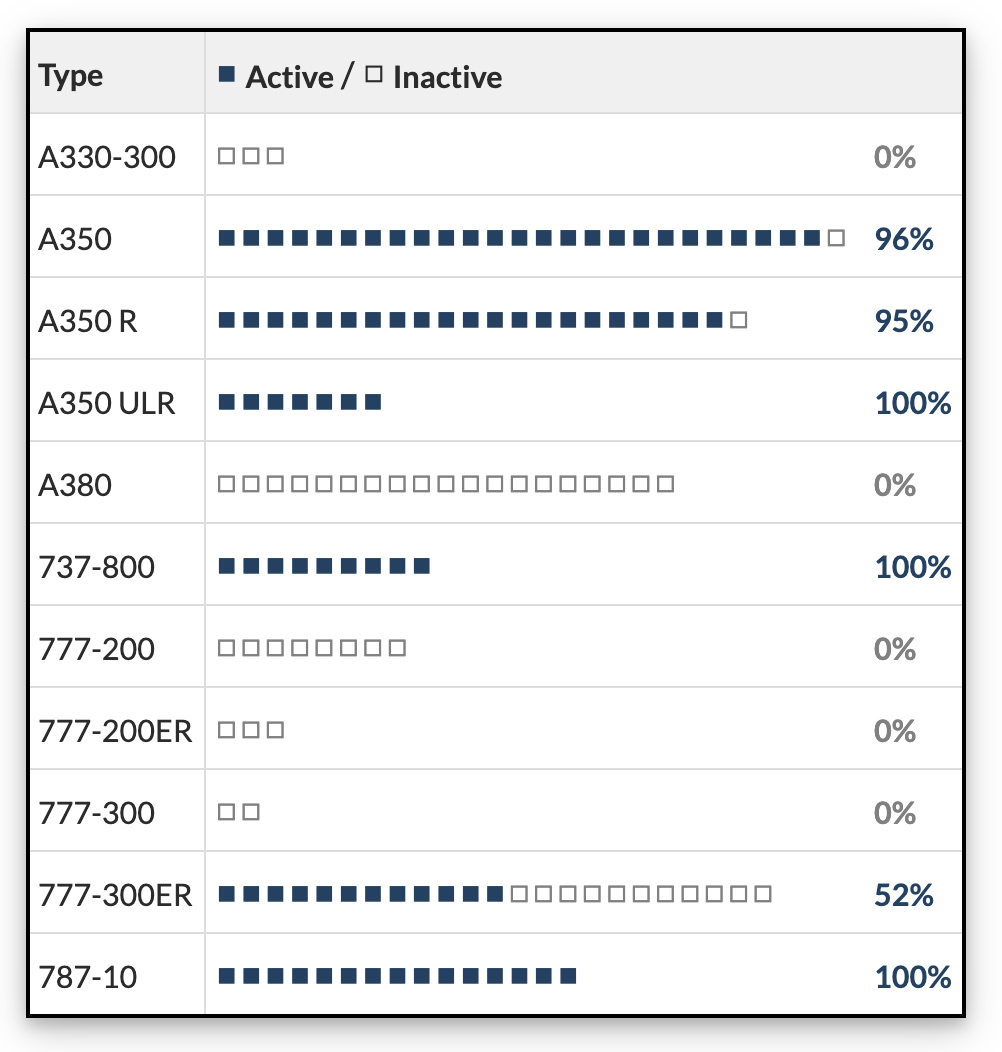 Here’s a look at how busy each aircraft fleet has been, based on active aircraft over the seven-day period from 21st May 2021 to 27th May 2021.

Airbus A350s are the current ‘workhorses’ in terms of daily flying hours per aircraft, though the Boeing 787s aren’t far off.

Not surprisingly, with 21 active aircraft and a focus on regional routes, the A350 Regional is flying the highest number of flights per week.

Four Boeing 777-300ERs have been retired

In SIA’s latest financial update, the carrier confirmed it had written-down the value of four Boeing 777-300ERs, with these aircraft now retired from the fleet. They will therefore not be returning to operation post-COVID.

We checked with Singapore Airlines, who confirmed to us that the affected aircraft are:

These are the four oldest Boeing 777-300ERs in the fleet, notably excluding 9V-SWB which has been spared an early retirement.

9V-SWB suffered extensive wing damage after a fire in June 2016, while landing at Changi after turning back from a proposed flight to Milan, due to a technical problem.

The repairs took five months to complete and the expenses incurred probably resulted a much higher write-off to bring the aircraft to ‘book value’ for resale, likely the reason it is being retained in the fleet for now.

This month, with the final SilkAir passenger flight completed, five of the regional wing’s six existing Boeing 737-8 MAX aircraft (9V-MBA to 9V-MBE) have been formally transferred to the Singapore Airlines Air Operator Certificate.

Here’s how the fleet will look once 9V-MBF also makes the shift.

According to our sources a second aircraft, 9V-MBC, has now also had its refit completed.

Aside from a repaint from SilkAir colours, the process also involves:

Here’s 9V-MBA pictured at Changi in late April sporting its new colours, with the tell-tale Wi-Fi antenna on the roof.

The MAXs will eventually replace SIA’s Boeing 737-800s, for a consistent product and service offering across the narrow-body and wide-body fleets, however the type is still awaiting approval to fly again in Singapore from the Civil Aviation Authority (CAAS).

No timescale for a reintroduction of the aircraft type in Singapore has yet been announced, but hopefully once that does happen we can look forward to a formal reveal of the new cabin products.

Three Singapore Airlines Airbus A330s remain in storage at Changi. All aircraft have ceased service, not flying revenue flights for over a year, and are for return to their respective leasing companies.

9V-SSI has yet to make a test flight appearance after sustaining tail damage during a landing incident at Yangon in November 2019. The aircraft was ferried empty to Singapore over 17 months ago in mid-December 2019, but has not flown since.

The Airbus A350-900 long-haul fleet remained at close to full strength in May 2021, with an operating total of 25 out of 26 aircraft. 9V-SMH appears to be having routine maintenance.