Skip to content
The countdown begins for the big reveal of the new Singapore Airlines regional business class product: 9V-SCA is en route to Changi 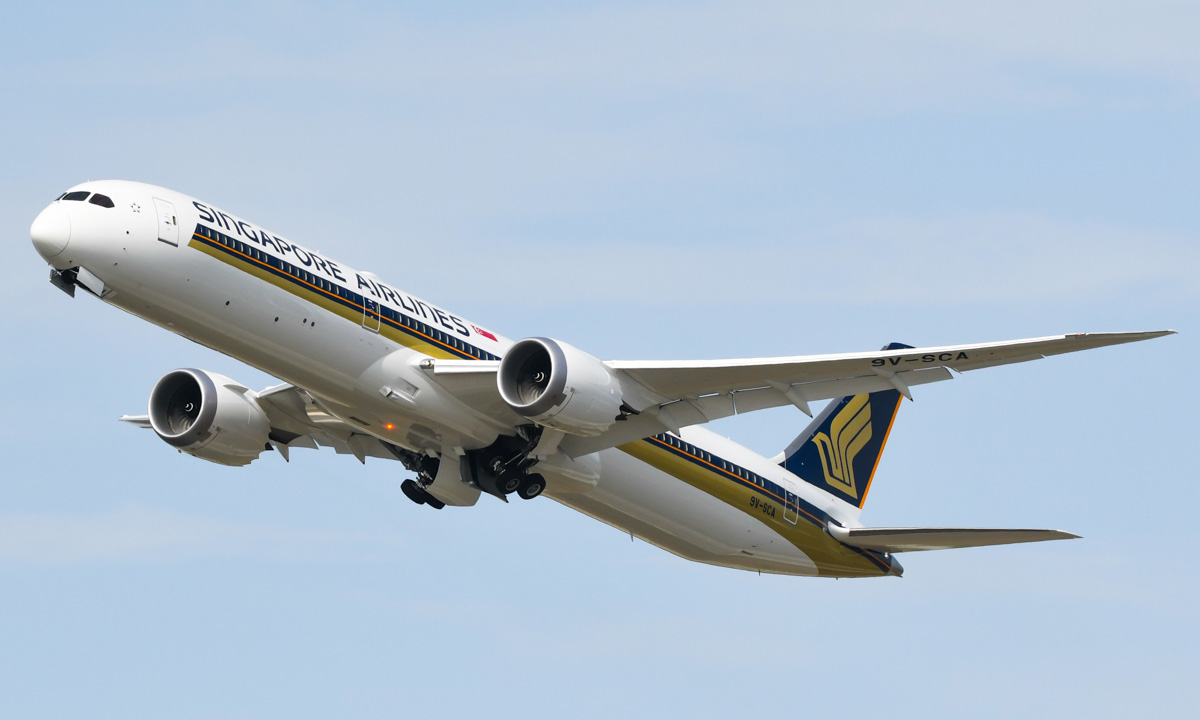 Most people, let’s face it, aren’t plane spotters. Here at MainlyMiles, even as we lie on the beach during our vacation seemingly without a care in the world, still admit to peering over the top of our book when a plane flies by. Just in case it’s… you know, something interesting.

Hopefully that puts us more in the ‘committed enthusiast’ column, rather than the ‘plane spotter’ one. Well there are only a few special occasions we’ll go full ‘spotter mode’, so here goes!

About 30 minutes ago 9V-SCA, the first Boeing 787-10 in the world to be delivered to an airline customer, took off from Charleston on the east coast of the USA for the day-long trip to Singapore, including a refuelling stop in Osaka, Japan.

Right now, the airline executives, journalists and lucky travel bloggers on board are no doubt indulging in fine food, remarking on the wonders of the new flat-bed regional business class cabin, and sipping expensive champagne (we’re not even jealous, because we were busy today anyway).

Why’s it so interesting?

Boeing 787s have been around for years, so why is this one so special? Well aside from being the first ever Boeing 787-10 in the world delivered to a commercial airline, 9V-SCA is the first aircraft in the Singapore Airlines fleet with the much-anticipated and very latest regional business class cabin installed.

It’ll begin to replace the current regional business class product, first introduced on the A330-300 nine years ago (almost to the day).

So where are the cabin pictures?

The press and bloggers on board, while enjoying their unique and exciting experience, are under a strict gagging order from Singapore Airlines. No cabin photos can be published until approximately 10am Singapore time tomorrow morning (28th March), when the aircraft touches down from its Osaka to Singapore leg.

David Flynn from Australian Business Traveller is on the delivery flight and teased us on his Facebook page with a shot of the IFE screen.

This pretty much confirms the seat map we predicted a month ago, roughly as shown here:

There’s not much to see from the reflection in David’s photo – unless someone can do some CSI-style Photoshop enhancement – other than it looks a lot like the Stelia Opal seat, with the inevitable SIA customisation. Only 24 hours to go before the full reveal, so we’ll likely have to wait till then for further details.

We’ll be covering the launch at Changi tomorrow morning, so stay tuned to the blog, our Facebook page and our Instagram page for the latest updates as they happen.

Does the plane look any different from other 787s?

Not exactly. In fact, not at all.

9V-SCA was legally handed over to Singapore Airlines on 15th March – 12 days ago.

Since then it has flown a dizzying array of 25 minute hops for crew training flights between Charleston and nearby Myrtle Beach almost every single day, finally winding up the program on Friday afternoon when it landed back in Charleston to be readied for the delivery flight today.

It’s the equivalent of flying from Singapore halfway to Kuala Lumpur and back again, and this plane’s been doing it twice a day pretty much all last week.

Where will it fly?

If you’ve been following our 787-10 coverage, you’ll know the first commercial passenger flights with this new jet will kick off next week with services to both Bangkok and Kuala Lumpur on 3rd April.

After that it’ll hit Osaka from 3rd May followed by Perth from 7th May.

Then more Japan services are rumoured, with Nagoya and Fukuoka potentially seeing services with the new jet, but we also expect these to be paired with closer cities like Jakarta and Manila for both scheduling efficiency and continued crew training as the fleet is ramped up.

9V-SCB, the second 787-10 for Singapore Airlines, is due to be formally handed over on 2nd April. We expect it will fly out to Singapore on a similar routing around mid-April, and will be used alongside 9V-SCA to help launch those Osaka and Perth flights in early May.

Including the plane on its way today, eight 787-10s will join the Singapore Airlines fleet this year. Here’s the status of those still to come, and the proposed delivery dates:

Note that future delivery dates are provisional, and relate to the legal handover of the aircraft from Boeing to Singapore Airlines, not the delivery flight to Singapore which will typically be planned some days later in each case.

Source: 787Blogger
* – SCG and SCH are the first two 787-10s ever built, and flew as test aircraft during the Boeing certification and test campaign, but will now undergo re-work and customer interior fittings, hence their later delivery dates.

Remember to stay tuned to the blog, our Facebook page and our Instagram page from about 10am tomorrow for the first look at the new regional business class seat.