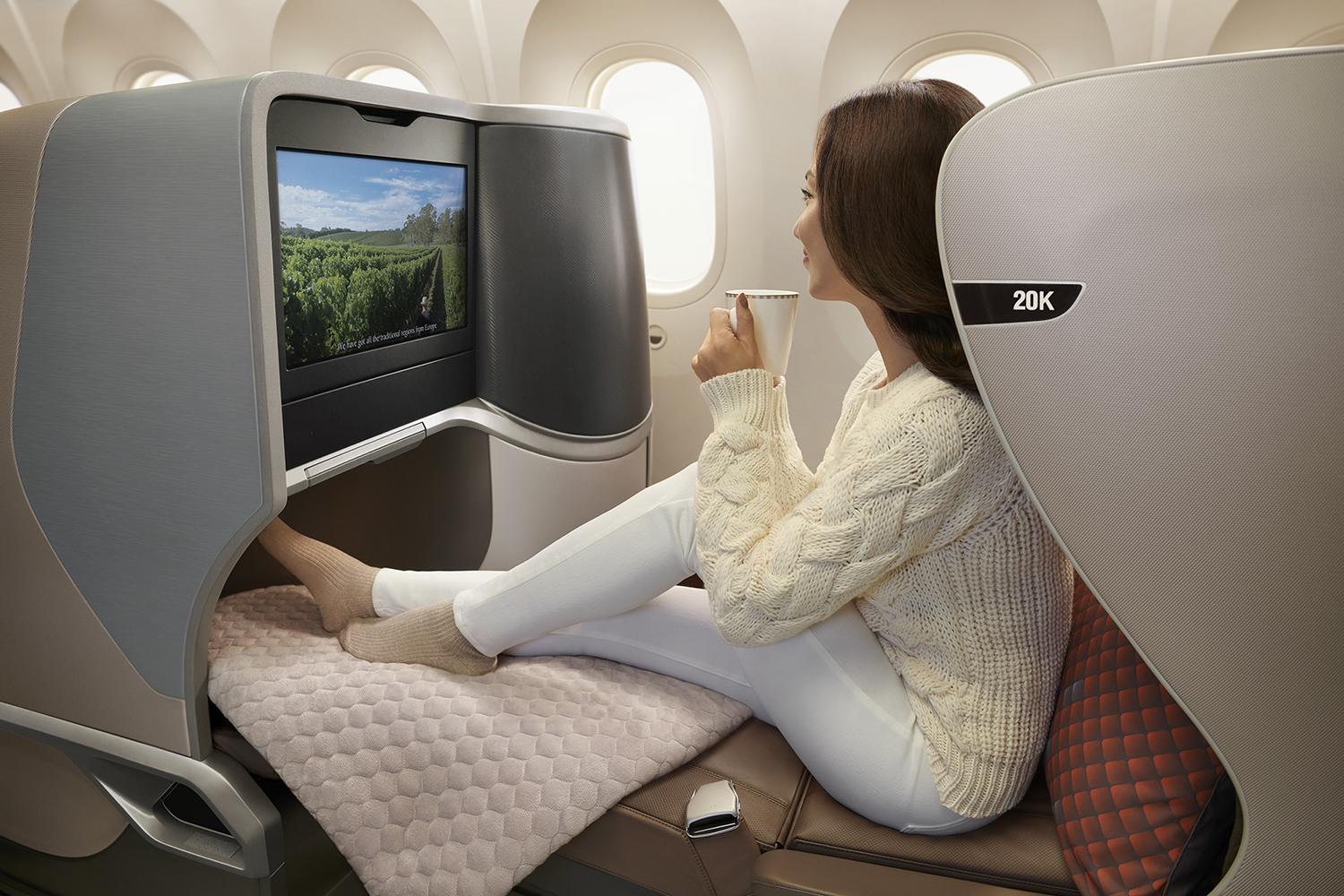 Just over an hour ago the first Boeing 787-10 for Singapore Airlines and for that matter the first in the world to be delivered to an airline customer, touched down at Changi Airport following a nearly day-long delivery flight from the USA. Inside – the long awaited and highly anticipated replacement for the Singapore Airlines regional business class product.

Arrival of the new jet has triggered the big reveal, and as predicted the airline has opted for a fully flat-bed seat in a staggered 1-2-1 configuration with direct aisle access for all passengers, to replace the ageing 2-2-2 sloped-bed seats currently used on the regional fleet.

As you may have already noticed from the product images – the first leak, by Australian Business Traveller back in January 2017, proved incorrect as Singapore Airlines have not opted for the STELIA Aerospace ‘Opal’ business class seat. Instead they have gone with the superior ‘Solstys III’ product by the same company as a starting point, customised and enhanced for Singapore Airlines as the ‘Symphony’.

It’s one of the more spacious seats on the market in the ‘staggered 1-2-1’ flat-bed business class category. The same basic product, albeit with different customisation, is already used by Alitalia and Azul Brazilian Airlines.

STELIA is an Airbus subsidiary, manufacturing a wide range of premium aircraft passenger seats in the first class, business class and premium economy categories – and yes, they’ll happily install their product in a Boeing aircraft for you.

As you can see, significant customisation has been applied to adapt the product to the Singapore Airlines customer standard.

The finish is in soft brown leather, with the light orange accents as seen in the new A380 products in the storage areas and cushions. At the headrest side, a sizeable ‘wing’ provides additional privacy, even for aisle-exposed seats.

We plan to fly on the 787-10 soon, so stay tuned to the blog for our full review of this new regional business class product.

The new regional business class seats are configured in a space-efficient ‘staggered 1-2-1’ configuration, where in bed mode your feet go partly underneath the console of the seat in front. That means the seat rows can be closer together, allowing the airline to increase capacity.

It also means the lateral position of the seats alternates at each row. That makes the ‘simplistic’ seat map on the Singapore Airlines website  (Edit: They have seen sense, scroll down…) when choosing a seat on aircraft fitted with these new seats, like the 787-10.

We took the liberty a month ago of predicting the likely layout, based on seats marked for disabled access (which we figured would be the ones closest to the aisle), and used it to correctly predict the actual seating layout, which looks very close to this much more useful seat plan:

Edit: Someone at SIA is listening, and reading! The online seat map has just been amended.

One advantage of the chosen layout is that couples aren’t left out, with five of the middle pair rows configured as ‘love seats’ situated directly alongside one another.

You’ll still have to lean forwards past the privacy ‘wing’ at headrest height to have a good conversation though, by the look of it.

Another option on quieter flights may be to take the risk of booking into an empty middle ‘couple’ pair when flying solo – in the hope that the seat next to you remains vacant. You could then retract the privacy divider potentially giving you a large private space to yourself, if the gamble pays off.

We’ll save a full rundown covering each aspect of the new regional business class for our own review of the product next month, and there are already some reviews you can read in full from the delivery flight (see links below in ‘What the Bloggers are Saying’).

A few features from these reviews do look quite neat though, so here’s a sample of what piqued our attention.

Based on the large hump about a third of the way down the fuselage of the Singapore Airlines 787-10s, we stated that Wi-Fi was an inevitability on this new jet – and indeed it was confirmed this morning that Panasonic’s Ku-band ‘Aeromobile’ Wi-Fi is fitted.

This system is already in use on the Scoot Boeing 787 fleet, but those used to Wi-Fi on the Singapore Airlines long-haul aircraft will be familiar with one thing – it’s a mishmash!

The prices are steep – and higher than Scoot are charging per megabyte on their 787s, which use an identical system. We can’t see a big take-up for this service especially on the shorter regional flights this aircraft will also be operating.

Singapore Airlines confirmed to us that those with a Boingo account, like the unlimited one which comes with the Citi Prestige card, will have complimentary access on this plane in accordance with their Boingo plan.

We also covered it in our recent article about the new free Wi-Fi allowance, and it was confirmed to us at the time by Singapore Airlines that the 30MB complimentary allowance for business class and PPS Club passengers will also be available on the 787-10.

Edit: There were conflicting reports between the Australian Business Traveller review and The Shutterwhale review on the Wi-Fi pricing plans. We reached out to Singapore Airlines who clarified that the above volume-based package will apply as shown in the table on the 787-10.

As expected, the 787-10 is equipped with the latest IFE system as installed on the new Singapore Airlines Airbus A380 aircraft, meaning you’ve got all the benefits of myKrisWorld where you can pair your individual device to the IFE system, making relevant media selections in advance of your flight using the Singapore Airlines app if you wish.

Two toilets are located at the front of the business class cabin on the 787-10, just aft of the forward doors ahead of row 11. That’s a passenger to toilet ratio of 18:1, not quite as good as the regional business on the A330 (15:1), but still acceptable.

You may wish to pick a seat towards the middle of the business cabin on an overnight fight on this aircraft, as the noise and foot traffic from the toilets could cause disturbance.

There’s also a galley at both the front and back of the business section, so mid-cabin wins on a night flight. Just be aware of the missing window at row 16.

So far we haven’t seen any photos of the toilets themselves, but expect them to be pretty standard.

What Singapore Airlines are Saying

Let’s take a look at what Singapore Airlines have said in their press release for this new product. First, a short promotional video for the new seat.

A few lucky travel bloggers and aviation journalists joined the delivery flight, and it seems many were furiously typing for much of the journey. Here’s a run down of their thoughts published so far on the new regional business product.

The latest edition of Flight International features the following cutaway drawing of the Singapore Airlines 787-10. It shows the seats and some more technical aspects of the aircraft, for those interested (click to enlarge).

When You Can Fly It

Starting on 3rd April 2018 only one Boeing 787-10 (the one delivered this morning) will fly four flights per day for Singapore Airlines (Singapore to Bangkok and back, and Singapore to Kuala Lumpur and back), meaning your chances of seeing the new regional business class product on your next flight are very slim indeed.

As the fleet ramps up there should be eight aircraft in service with the new seats by October 2018, and in 2019 the ‘Regional A350’ aircraft will also be delivered with this product installed.

For full details of the routes and dates we know about so far with this new product, check our Singapore 787-10 schedules info here.

What are we Losing?

The 2009 regional business class seat (2009 RJ), but not anytime soon. As of today – 36 Singapore Airlines aircraft are still fitted with this seat, in a 2-2-2 configuration:

The seat was designed by Weber Aircraft LLC (now Zodiac Seats U.S.), and was first introduced on the Airbus A330 (9V-STA) delivered in January 2009.

By February 2009 the aircraft was regularly flying to Kuala Lumpur and Jakarta as crews gained experience of the new aircraft type, but the first ‘official’ launch was on 30th March 2009 from Singapore to Brisbane – almost exactly nine years ago today.

The new 2018 regional business class looks like a great product, and it’s exciting to have a private, direct aisle access fully flat-bed seat for flights as short as Kuala Lumpur and up to eight hours from Singapore.

We’re looking forward to trying out the new seats for ourselves next month, so as always stay tuned to the blog for our comprehensive review of this new product.