Skip to content
A solid hotel offering from SPG with fantastic views, spacious rooms and good facilities, let down mainly by a slightly awkward location. 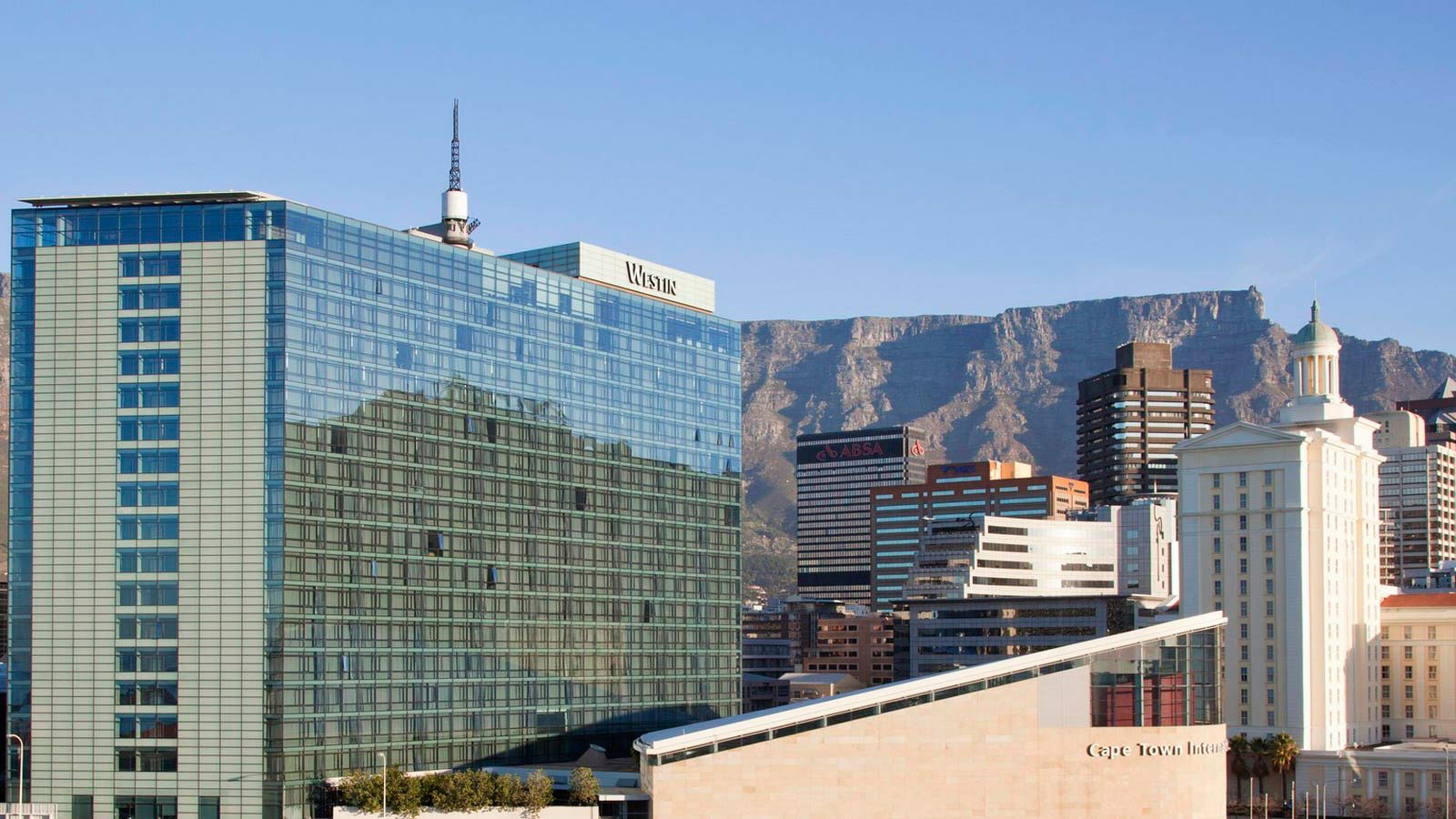 After spending two weeks touring around South Africa during January this year, mostly staying in small ’boutique’ hotels which we felt would probably be of little interest to our readers, we found ourselves spending the last two nights at The Westin Cape Town.

As it’s one of the highest rated hotels in central Cape Town, and part of the giant SPG / Marriott portfolio, it’s a likely option for anyone visiting the city, so we decided to review our stay here.

The Westin is located right next to the Cape Town International Convention Centre, at the north end of the main central business district, about a 10 minute walk to the many shops, bars and restaurants in this area.

It’s a little further from the V&A Waterfront, about a 20 minute walk, but the hotel provides a regular complimentary shuttle service between 9am and 11.15pm, operating every 30 minutes for most of the day.

Unless you’re in town for a convention, in which case this hotel is perfect, we found the location a little awkward – neither in the main shopping area nor the V&A waterfront. Having said that the shuttle service was efficient and Uber rides in Cape Town are safe and inexpensive.

If you’re travelling from Cape Town International Airport, the journey to the hotel is as little as 20 minutes, but can increase to over 30 minutes in heavy traffic at peak hours. The Westin will provide a private car transfer on request, which we took advantage of on arrival for ZAR 695 (about S$77). That’s quite steep but by far the smoothest arrival experience.

The public transport option from the airport is not ideal – a ZAR 150 (S$17) bus service which takes 45 to 55 minutes and operates to the Civic Centre bus station, two kilometres from the hotel. From there you’ll need to take a taxi for the final part of the journey anyway.

Check in was quick and efficient and we received very friendly service, this was a common feature with all staff we encountered at the hotel especially in the Club Lounge.

While these rooms are no bigger than the hotel’s standard ‘Deluxe’ rooms, they are located on higher floors and have complimentary club lounge access.

The room is a reasonable size but is starting to look a little dated. Built-in laminate pine-effect wardrobes flank the walls and the other furniture is rather poor quality compared to other Westin hotels we have stayed at.

The fittings are starting to show their age too, with some lamps hanging off the wall at an angle. The bed however was extremely comfortable – as always with the signature ‘Westin Heavenly Bed’.

The view was over the exhibition centre with a glimpse of Table Mountain to the right.

A well-stocked chargeable mini-bar, with no space for your own wine or beer, is located in the wardrobe. We particularly dislike this style of mini-bar, as even if you move one of the items to refrigerate one of your own (say a bottle of nearby Stellenbosch white wine) you are automatically charged. Cue a possible argument with reception at checkout time!

The in room coffee machine made a reasonable espresso but there was no milk, only powdered creamer – a bit disappointing for a hotel of this standard.

A selection of out-dated sockets that are no longer useful lines the desk.

A desk with two chairs is a thoughtful touch in an executive room where you are expecting business people who will likely be sitting down to do some work, and is also ideal for in-room dining.

One thing that impressed us about this hotel was the little touches, like easy printing services from your mobile device or laptop, the lavender balm fragrance for better sleeping and the daily weather forecast card left next to the bed.

The hotel also has a supply of New Balance workout gear which can be delivered to your room in your size, if you didn’t pack your gym kit (no excuses now!).

The Executive Club Lounge is located on the 19th floor of the hotel, with spectacular views over the V&A Waterfront area to one side, and Table Mountain to the other. The space is also partly shared with ‘On 19’, one of the hotel restaurants.

An extensive breakfast is served in the club lounge with tea and coffee available throughout the day and a ‘Canapé Hour’ in the evenings (which actually runs for 2 hours), also offering complimentary snacks and beverages.

During the evening ‘Canapé Hour’, which runs from 5pm to 7pm, we were seated with a fantastic view of Table Mountain as we enjoyed a glass of wine and some food, all with table service rather than the more common self-serve style found in many hotel club lounges.

A white wine and a red wine were on offer, both scored fairly well on our favourite wine-rating app Vivino, 3.4 out of 5 for both the Pinot Grigio and Cabernet Sauvignon.