Skip to content
Given the choice, Japan's All Nippon Airways wouldn't be doing this. Kudos to them for making the best of it nonetheless. 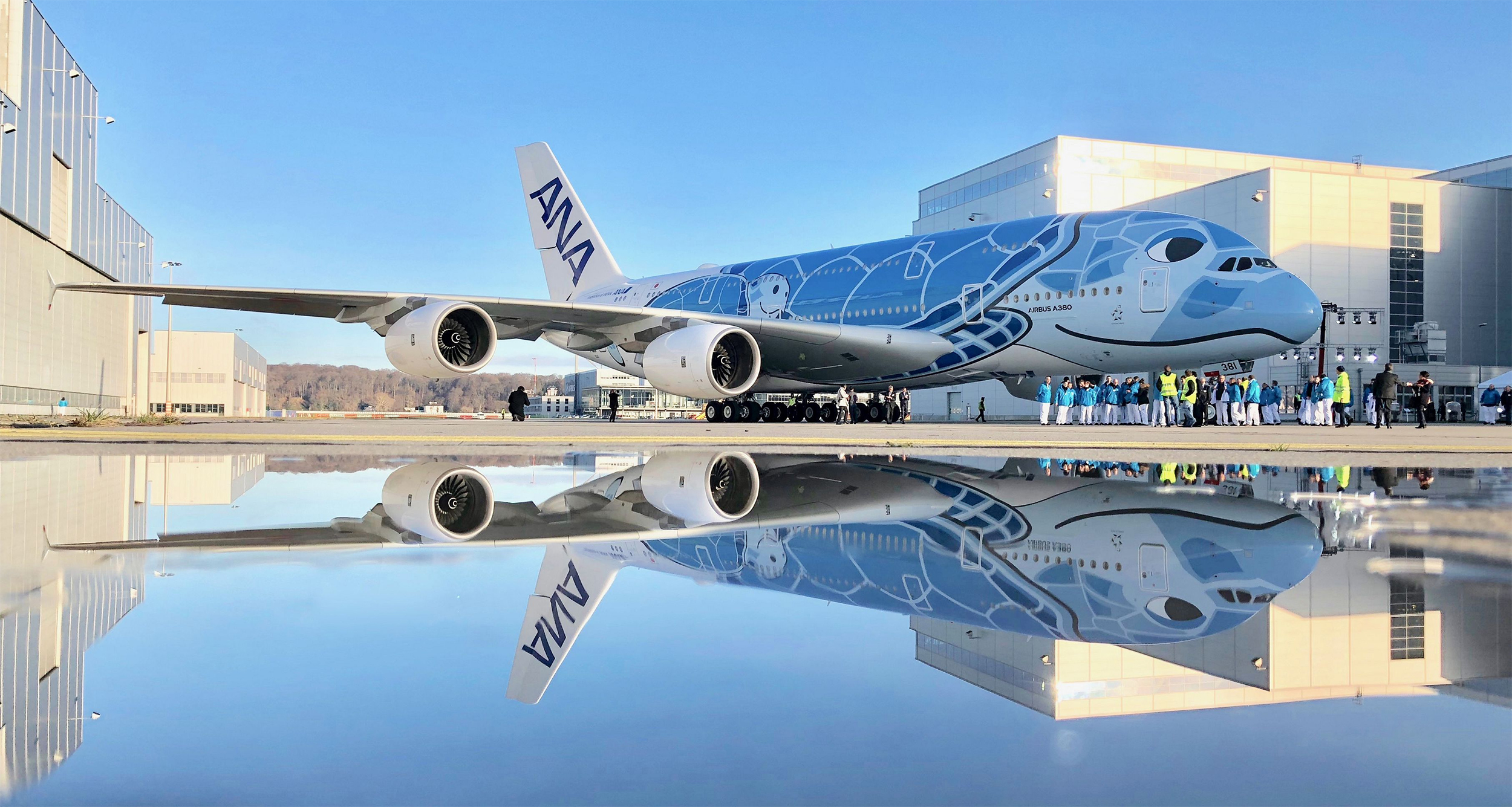 The first of three Airbus A380 aircraft for Star Alliance carrier All Nippon Airways was rolled out of the paintshop in Hamburg yesterday morning in its special blue ‘turtle’ livery. Japan’s first Airbus A380, it sports a Hawaiian green sea turtle, known as “Honu” in the Hawaiian language, which symbolises good luck and prosperity.

The airline first announced it was ordering just three Airbus A380s in late 2015. A strange decision on the face of it, in fact the trio of superjumbos was part of a deal with the creditors of Skymark Airlines (the major pair being Airbus and Rolls-Royce) to secure more takeoff and landing rights at slot constrained Tokyo Haneda airport, and prevent an American giant encroaching on the Japanese aviation market.

The consequence? Taking these planes was a non-negotiable part of the deal. The result? ANA has triumphed in making the best of an unwanted scenario, branding the ‘FLYING HONU’ jets with unique distinctive liveries and a specialised onboard product and service.

The backstory to the ANA A380

What airline in its right mind orders only three A380s?

Simple question – as it’s clearly impossible to make a profit from a brand new A380 fleet that small due to the significant operational overheads for a standalone wide-body aircraft type.

Simple answer – no airline, not even this one, would ever do it. ANA didn’t order these planes of its own free will. This all happened effectively under duress in 2015 as the carrier was vying for what was left of Japan’s then-bankrupt Skymark Airlines.

ANA needed more slots at Tokyo’s Haneda airport, and Skymark had plenty of them. The problem was that Skymark, in a moment of either misplaced optimism or pure insanity, ordered six brand new Airbus A380s in 2011. These enormous aircraft had a US$1.7 billion value – higher than the airline’s entire 18-strong Boeing 737-800 fleet at the time.

Deposits were paid and Airbus started building the first two planes, but an impasse was soon reached. Skymark, now cash-strapped following a major devaluation of the Yen against the US Dollar, missed a major (and contractually required) payment for the planes in April 2014.

When it became clear later that year that Skymark wouldn’t be able to make the required payments due for the aircraft to be completed, around the time interior fittings including cabins, toilets and galleys were set to be installed, Airbus refused to work on the planes anymore and they were parked up indefinitely.

It was a logical move from the manufacturer – once major service fittings including water and waste lines serving galleys and toilets are installed in an aircraft this size, it’s almost impossible for them to be reconfigured to the preferred specifications of another carrier. In fact no two Airbus A380 operators worldwide have the same galley / toilet locations as one another.

By July 2014, Airbus had run out of patience and formally informed Skymark that its A380 order was terminated. The two aircraft already built were eventually picked up by Emirates in late 2017, though it’s thought Airbus took a large financial hit offloading the pair for around half the list price.

Back to the takeover bidding of the bankrupt carrier though, Airbus (who had now built two A380s for Skymark) and Rolls-Royce (who were building the engines for the planes) were creditors to 45% of Skymark’s debt.

Another complication was that while Jetstar and Hainan Airlines were also in the running to take over the remnants of Skymark, it was US carrier Delta Air Lines who was the most likely viable competition for ANA’s bid.

That meant a potentially catastrophic breakup of the duopoly ANA and JAL enjoyed in the Japanese aviation market.

“Delta has demonstrated its equity investments are not mere tokens; the airline turns its acquisitions into more sustainable operations, integrated into the Delta framework. Delta would likely have made Skymark far more efficient than ANA will ever be able to, as well as generating significant synergies. The threat of a third competitor in the domestic and long haul market was so great as to make any other option preferable. The complexity of an A380 operation, and possibly even of sustaining losses, becomes an acceptable trade-off.” CAPA – January 2016

“If Skymark submits the plan (that involves ANA’s sponsorship), there is a significant and realistic risk that it would not be able to gain the support of major creditors, including Airbus”. Airbus

In other words, take the planes or Delta wins.

ANA weren’t prepared to let that happen and succumbed to the demand, effectively having to place a fresh order for three brand new A380s as part of the deal. What they were going to do with them was the next question.

Yesterday morning Airbus rolled out the first ANA Airbus A380 from the paintshop in Hamburg, Germany. Here’s how the ‘whale’ looks, in the blue (green!) turtle livery.

Airbus said that the ANA A380 livery is one of the most elaborate they have ever painted, taking 21 days for the 120-strong team to paint a surface of 3,600 square metres using 16 different shades of colour.

Aircraft two and three will be the green and red versions, arriving from mid-2019. 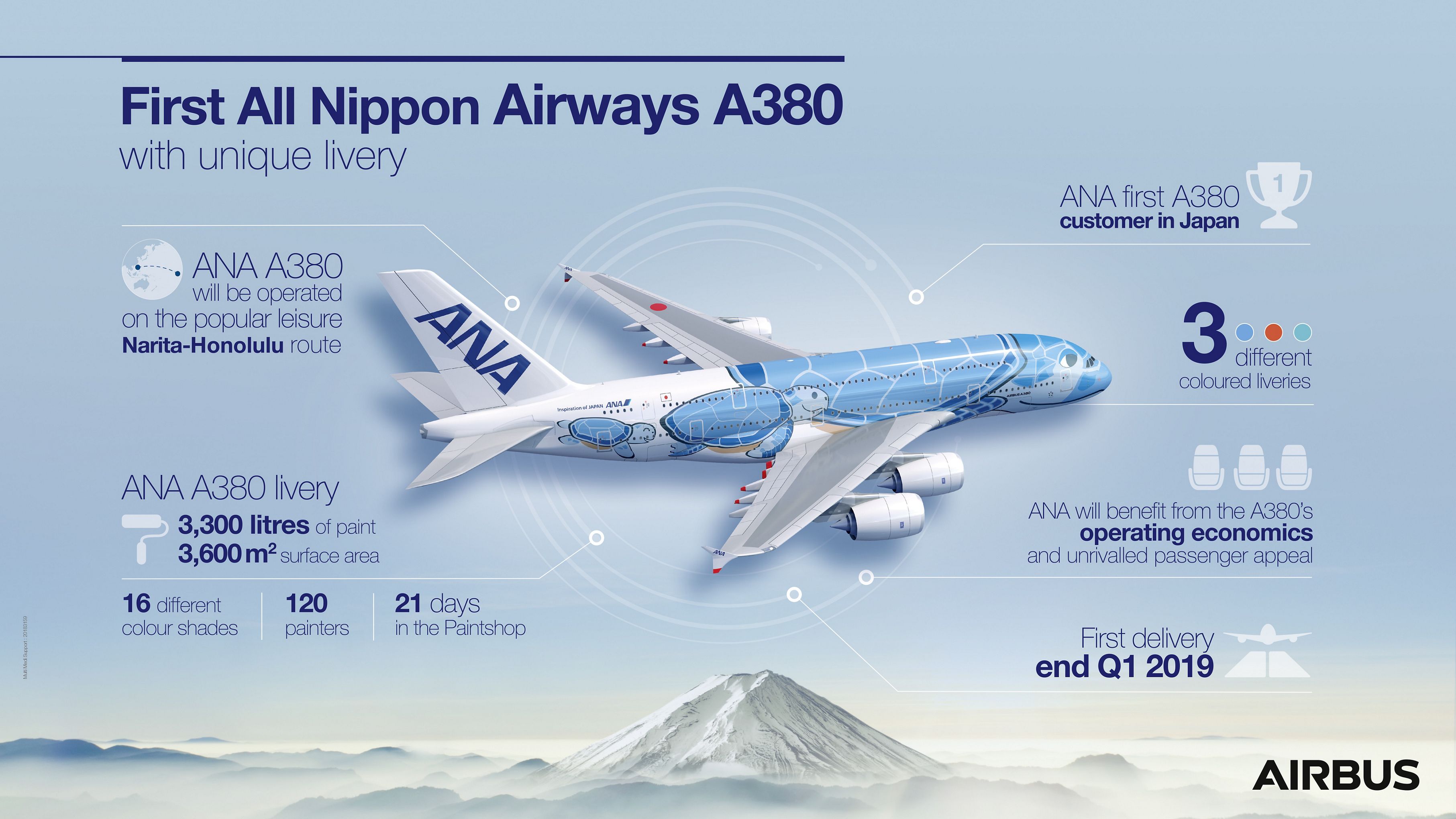 The aircraft will now have completion of its cabin and enter a final phase of ground and flight tests in Hamburg, before it flies back to Toulouse for preparation of its delivery and ferry flight.

ANA will be the 15th airline worldwide to operate the A380 when it takes delivery in March next year.

This will be the second-densest A380 configuration in service once it starts flying next year, with 520 seats in total, comprising:

Only Emirates squeezes more seats into its 2-class A380s, which accomodate an incredible 615 passengers.

It’s certainly a far cry from Skymark’s original plan to fit just 394 seats to these aircraft – which would have been the lowest density configuration on the market with 114 Business Class seats on the upper deck and 280 Premium Economy seats on the main deck.

ANA has never offered First Class on its Honolulu route before, so this new 8-seat cabin at the front of the A380’s upper deck, featuring two rows of enclosed suites in a 1-2-1 configuration, is a true enhancement on the route.

Solo window seats are obviously very private, but the central seat pairs have a full-height divider between them in case you don’t know the person next to you, maintaining high privacy levels.

With the divider retracted though, these pairs provide a sociable space for couples with excellent privacy in your ‘double suite’ once the doors are closed at each side.

Amenity kits on the A380 Honolulu flights have been designed in collaboration with English luggage manufacturer Globe-Trotter, the first time the brand has worked with an airline.

When it comes to dining, First Class passengers can look forward to a choice of food from “Noe” an award-winning Italian Restaurant located at the five star luxury Four Seasons Resort Oahu at Ko Olina.

The meal will be overseen by the restaurant’s Michelin starred Head Chef Ryo Takatsuka. This menu will be served from the start of A380 services on 24th May 2019 through the end of August 2019.

When it comes time to take some rest on these 8-hour flights, First Class passengers are provided with a comforter from Japan’s famous Tokyo Nishikawa Sangyo, as with existing First Class ANA flights.

Pillows are made out of premium Hungarian white duck down, and passengers will also receive 100% organic cotton loungewear and a blanket made by the renowned Japanese producer Tenerita, who claim to be the only Japanese company holding the Global Organic Textile Standard certification.