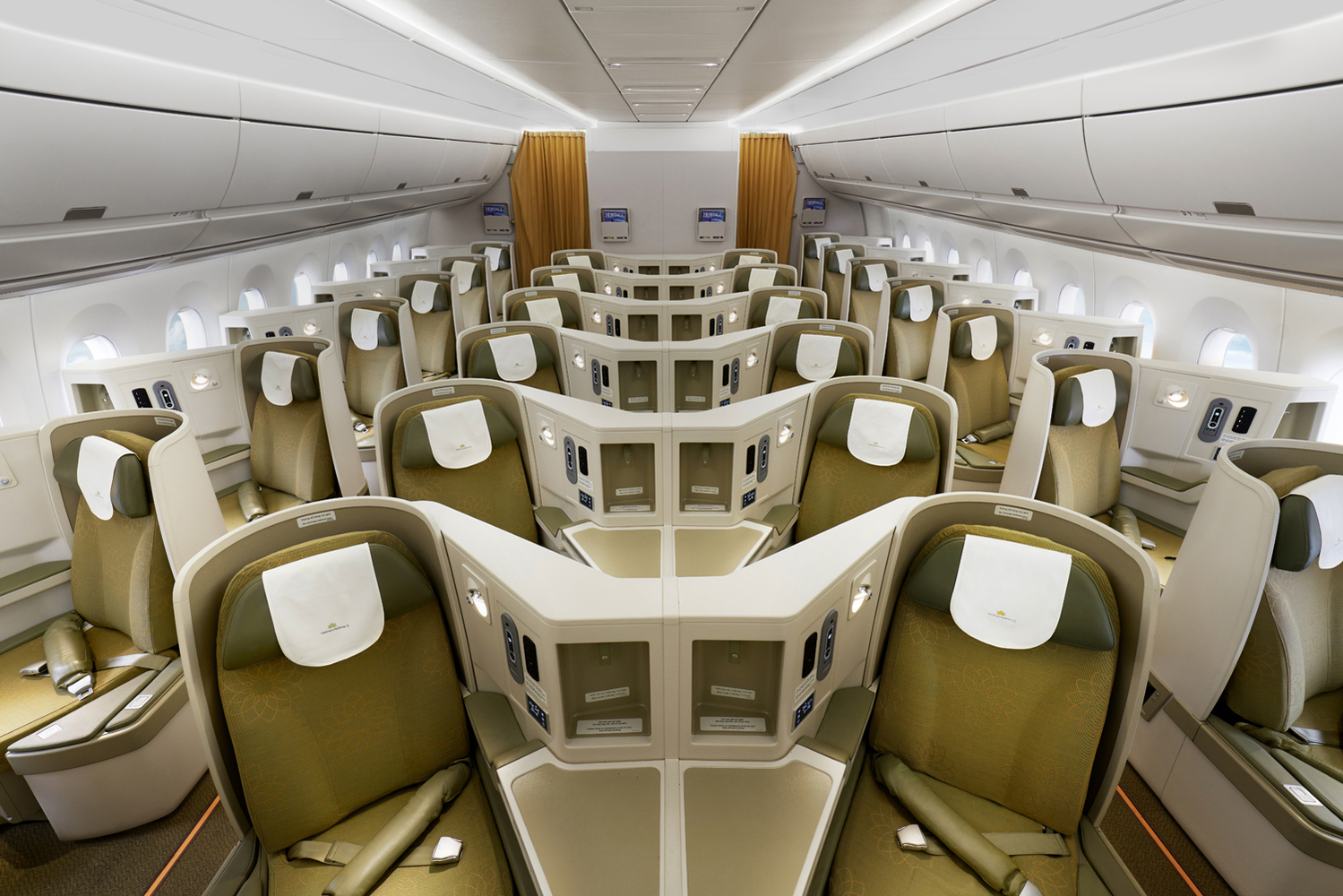 In a schedule update posted on Monday, Vietnam Airlines revealed that it is replacing one of its three daily Airbus A321 services between Singapore and Ho Chi Minh with an Airbus A350 from March 2019.

This aircraft features 29 flat-bed seats in Business Class, a far cry from the 16 recliner seats offered on the current A321, meaning the airline will soon offer a long-haul product all the way to destinations such as London, Frankfurt and Tokyo with a single stop from Singapore.

Vietnam Airlines flies three times daily between Singapore and Ho Chi Minh. From 31st March 2019 the evening service VN656/VN657 will be operated by the Airbus A350-900 in 29J/276Y configuration, as highlighted in the following schedule.

Vietnam Airlines intended to fit a common Business Class seat to its new Airbus A350 and Boeing 787 aircraft – the popular Zodiac Cirrus seat in a 1-2-1 reverse herringbone layout. It’s the same long-haul Business Class seat now used by many airlines, including Cathay Pacific, albeit with different customisation.

As one of the first customers for the A350 though, Vietnam Airlines got caught up with the Zodiac delivery delays issue. That meant in order to stick to the original delivery schedule the airline had to source a different seat for its first four A350 aircraft – the Stelia Solstys.

The remaining eight aircraft delivered since those first four have the intended Cirrus seat, as pictured below.

It really doesn’t matter which seat you pick with this configuration, the choice being only between window or middle seats.

Whichever seat type you get you’ll still enjoy direct aisle access with the 1-2-1 layout common to both versions. Generally speaking, Vietnam Airlines try to use A350s with the Stelia seat on shorter flights in Asia-Pacific, with the Cirrus seat focussed on long-haul flights to achieve commonality with the Boeing 787 (which all have the Cirrus seat).

It can still be either seat type on the Singapore route though, and unfortunately the seat map is identical for the two configurations, making it very difficult to know which one you’ll get.

We haven’t tried the Vietnam Airlines A350 yet, but check out these recent reviews of the Business Class cabins for each seat type:

This equipment upgrade is good news for those connecting to or from long-haul Vietnam Airlines flights, as you’ll now get a flat-bed product for the whole journey provided you can make a suitable connection to or from this A350 service.

The VN656 from Singapore connects to the following Vietnam Airlines late evening medium- and long-haul departures from Ho Chi Minh:

Previously you had to ‘slum it’ in a recliner Business Class seat on the airline’s Airbus A321 aircraft on the Singapore to Ho Chi Minh leg, or vice-versa at the end of your return journey.

Here are the miles or points balances you’ll need with some of the more popular SkyTeam frequent flyer programs to fly on this route.

We checked Business Class award availability on the route in both directions for April 2019 and found at least 2 award seats in this cabin on every day of the month, with the exception of four days towards the end of April between Ho Chi Minh and Singapore, which showed no availability.

Cash fares in Business Class aren’t particularly attractive on this 2-hour A350 flight, with a return trip from Ho Chi Minh to Singapore starting at S$792 in April, rising to S$1,043 if you start your (return) journey in Singapore instead.

One-way tickets are available in Business Class from S$606.

The important thing we noticed is that the cash fares in Business Class for the A321 flights and the A350 flights are identical. As the photos above illustrate, the hard product is worlds apart so if you are parting with either miles or cash (or better still, your company is footing the bill), go with the VN656/657 from 31st March onwards for a far better experience.

One minor disadvantage for passengers flying out of Singapore Changi on this Vietnam A350 flight is a longer walk than usual through Terminal 4, already known for its lack of moving walkways compared to other Changi terminals.

That’s because the flight will have to use one of the four gates at the north end of the terminal, designed for wide body aircraft (G18 – G21). Vietnam’s A321 flights on the other hand usually depart from a mid-terminal position (G5 – G12), a short walk from the main shopping area and the Blossom lounge.

Another one to add to our long-haul seats on short-haul routes article next time we update it, Vietnam joins a few other Asian carriers operating long-haul Business Class products from Singapore to their respective hubs.

That’s good news because it means you don’t necessarily have to put up with those dreaded ‘recliner’ seats just to get a cheap fare on a long-haul Business Class itinerary.