Skip to content
First Class Suites awards from Japan to Hawaii are available from 62,500 miles on ANA's new A380 flights 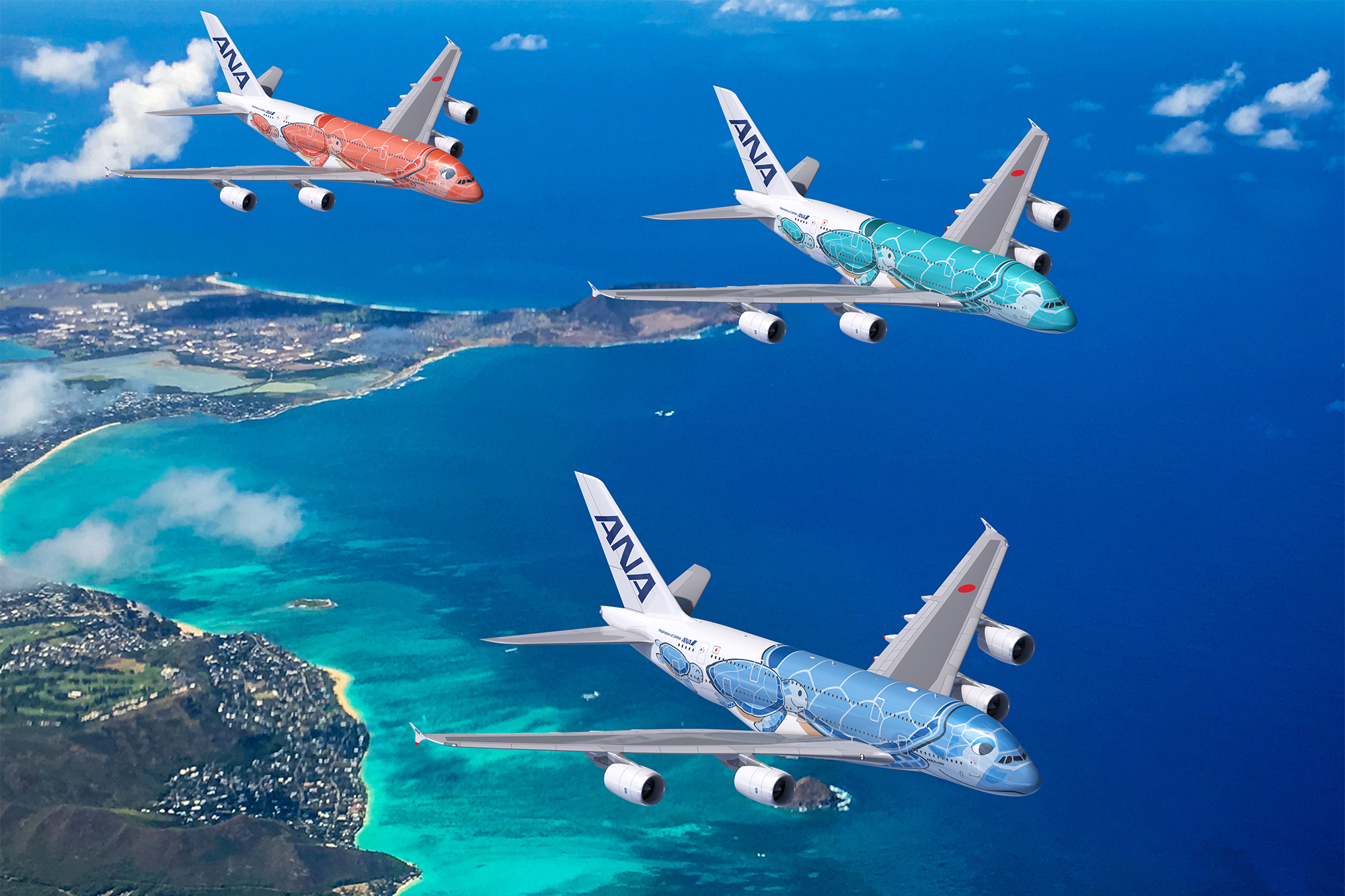 We recently covered the rollout of All Nippon Airways’ first of three Airbus A380s in its special turtle livery, including details of the new cabin products set to be installed on these jets which will enter service in May this year.

Flight schedules and award tickets went online yesterday, with some special offers too, and here’s how it looks.

This is the current ANA flight schedule between Tokyo and Honolulu, with two Boeing 787-9s flying the route on a daily basis from Narita airport and an additional 787-9 flying from Haneda.

It hasn’t been announced which flights the third and final A380 to join the ANA fleet will operate, though it seems logical that the NH182 / NH181 pairing will then operate with an A380 on a daily basis, switching the entire Narita to Honolulu operation to the superjumbo year-round.

This would then leave the sole daily Tokyo Haneda flight operated by ANA using the Boeing 787-9 from that time.

First Class promises to be a treat on these aircraft, with eight suites on the upper deck in dark grey / black tones, with closing doors and 32″ IFE screen. Special amenity kits will be provided, as will catering from “Noe” an award-winning Italian Restaurant located at the five star luxury Four Seasons Resort Oahu at Ko Olina, as we highlighted in our recent article.

ANA has published some promotional First Class fares for these Airbus A380 flights, announcing that return fares from Tokyo to Honolulu will be available from ¥ 350,000, around S$4,400, plus taxes and fees.

We did find this fare on a few dates, mostly in early July, however on other dates it costs much more.

Star Award availability (seats for redemption for those using miles from other Star Alliance programs like KrisFlyer and Lifemiles) is non-existent in Business Class so far on these flights, and very sparse indeed in Economy Class. This is not the case if you book using your ANA Mileage Plan miles, see later in the article for details on that.

First Class Star award availability starts off similarly, but it does pick up in July however once two daily flights are operating on certain days of the week (and a daily A380 is the norm), and award seats really become much more plentiful in August.

ANA has never offered First Class on its Honolulu route before, so this new 8-seat cabin at the front of the A380’s upper deck, featuring two rows of enclosed suites in a 1-2-1 configuration, is a true enhancement on the route.

With upwards of 16 seats per day flying on the city pair by July, and cash fares very much on the high side, we think First Class award availability will improve even more as the launch date for these flights approaches.

We found the same award space well replicated via the KrisFlyer portal:

You’ll certainly want to be redeeming Lifemiles or United MileagePlus miles on this route over KrisFlyer miles, which are a very expensive option in comparison. Other good options include Aegean Miles+Bonus and Lufthansa Miles & More. Which brings us on to…

Here are the miles redemption options for these Hawaii flights. Firstly, all the way from Singapore to Honolulu via Tokyo.

* ANA Mileage Club requires all redemption flights to be return journeys, the mileage shown here is half the total for a return trip for proper comparison with other FFPs, but there is no option to actually book one-way under ANA Mileage Club. Slightly lower rates apply for low and regular season (high season rates shown for ANA).

Secondly if you just want to redeem from Tokyo to Honolulu.

* ANA Mileage Club requires all redemption flights to be return journeys, the mileage shown here is half the total for a return trip for proper comparison with other FFPs, but there is no option to actually book one-way under ANA Mileage Club. Slightly lower rates apply for low and regular season (high season rates shown for ANA).