Skip to content
Turkish Airlines will boost its Singapore and Kuala Lumpur to Istanbul flights in 2020, with many services featuring the airline's new Business Class on the Boeing 787 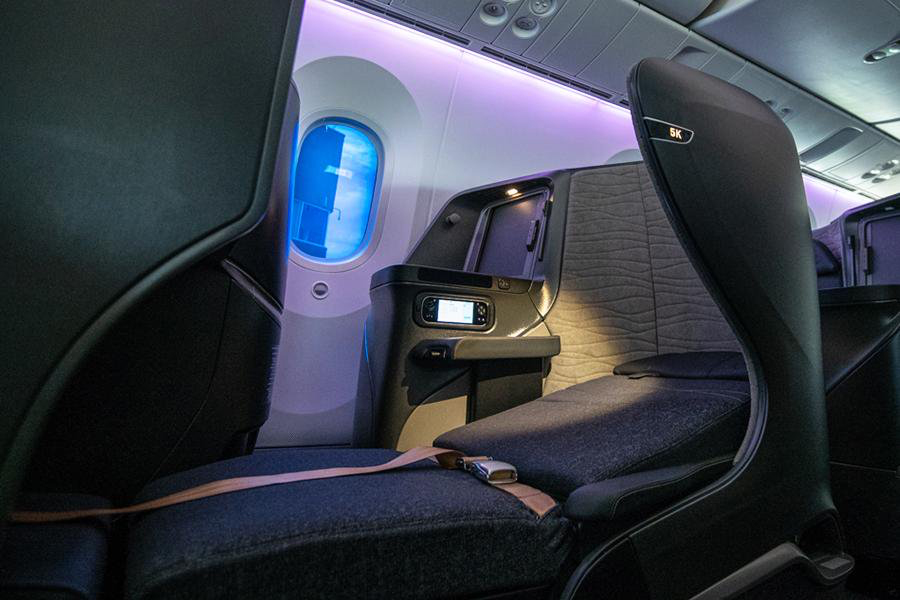 Fast-growing Turkish Airlines has become a major player in the hub-and-spoke market, particularly linking Asia to Europe and other regions with a current fleet of over 300 passenger aircraft, a threefold increase in the last decade.

The airline’s rapid growth has seen it introducing some of the latest aircraft including two backbones of its long-haul fleet, the Airbus A330 and Boeing 777-300ER.

The airline has recently moved to a brand new hub airport in Istanbul, and is renowned for its on board catering and home base lounges.

When it comes to the Business Class cabin though, Turkish has been caught sleeping.

While competing Asian carriers have embraced all aisle access seats and Middle East rivals like Qatar Airways have even introduced enclosed suites, Turkish has stuck with ‘strictly 2000s’ 2-2-2 and 2-3-2 layouts on its long-haul jets in this cabin.

That’s recently changed though. Turkish has launched a brand new Business Class seat for its latest Boeing 787-9 and upcoming Airbus A350-900 jets, their ‘Aurora’ design, based on the Stelia Symphony seat.

If that rings a bell, it should. This is the same Business Class seat being used by Singapore Airlines as its 2018 Regional Business Class product in a staggered 1-2-1 layout, allowing direct aisle access for all passengers.

So far, launch customer Singapore Airlines and Turkish Airlines are the only two carriers flying this seat type, which is based on Stelia’s Solstys III model.

It’s certainly not the widest Business Class seat on the market, but its privacy, all-forward facing layout and easy conversion into a 76″ fully flat bed are key selling points.

Middle seat pairs at alternate rows are aligned directly alongside one another, making them ideal for couples, with a large extendable divider in case you are sat in one of those seats next to a stranger.

In the Turkish Airlines layout, odd numbered rows have window seats more exposed to the aisle with even numbered ones more privately aligned against the window.

In the middle pairs it’s the E/F seats suited to couples, with D/G seats closer to the aisle and better for solo travellers. That’s not the same as the Singapore Airlines labelling, where the middle seats are all marked D/F in this cabin regardless of their arrangement. 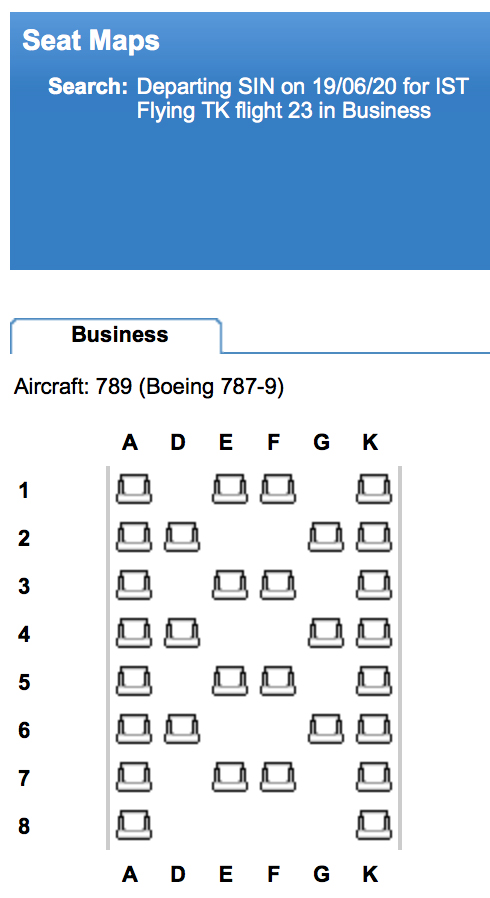 The seat map does look slightly strange, but it’s actually the exact same cabin layout as the Singapore Airlines 787-10, with fewer rows.

To get an idea what to expect from the Turkish Airlines seat, check out our reviews of the same product as installed on the Singapore Airlines Boeing 787-10 aircraft.

While Singapore Airlines will only deploy these seats on regional flights of up to 8 hours, it is designed as a long-haul product, so that fact says more about SIA’s high standards for long-haul Business Class than anything else.

Turkish Airlines now has an operating fleet of four Boeing 787-9 aircraft, out of a total order for 30 aircraft due to be delivered by 2022.

Like the Singapore Airlines A350 Regional aircraft, the A350s will benefit from a cabin 12cm wider, meaning more aisle width and window side space for passengers compared to the 787.

Currently operating once per day, the Turkish Airlines link between Singapore and Istanbul is flown by the Boeing 777-300ER. It will be supplemented by three additional services per week from early June 2020, using the Boeing 787-9.

The additional flights will offer daytime service from Singapore to Istanbul on Tuesdays, Fridays and Saturdays, with early overnight return service on Mondays, Thursdays and Fridays, as highlighted below.

From 19th July 2020 (20th July 2020 departing Singapore), an additional 787-9 flight flies on Mondays, with overnight return on Sundays from Istanbul, for a total of four weekly flights with the new seats.

11-times weekly operation by Turkish Airlines on the Singapore – Istanbul route is also supplemented by Singapore Airlines’ own direct service on the route, switching to the long-haul A350 with 2013 Business Class seats from December 2019 and increasing to five-times weekly from April 2020.

That will increase the total number of weekly flights from Singapore to Istanbul across the two Star Alliance carriers from 11 today to 16 by July 2020.

The additional TK23 flight from Singapore meets an evening departure bank at Istanbul, with valid connections to a wide range of European cities including Athens, Amsterdam, Frankfurt, Paris, Milan, Tel Aviv and London.

That not only gives you a daytime option to Europe, which some passengers prefer, but your evening arrival at your final destination also means no concern about your hotel room being ready.

If you’re looking to fly all the way from Singapore to the USA with Turkish you’ll unfortunately have to stick to the 777-300ER flight TK55, or spend a night in Istanbul en-route.

For the evening return flight TK22 from Istanbul there are a similar range of European connection opportunities, but this time you can also fly all the way from the USA to Singapore with ideal links from Atlanta (787), Boston (787), Chicago, Houston, Miami, New York, San Francisco and Washington (787).

Flights to Singapore from many of those cities currently involve a long wait at Istanbul, however this new evening service is perfectly timed to coincide with many of the afternoon USA arrivals in Istanbul, providing a more seamless option four days per week.

Kuala Lumpur also gets the 787

Singapore won’t be the first Asia-Pacific route to get the Turkish Airlines 787. Services have already been running between Bali and Istanbul using the new planes since mid July 2019, Tokyo and Osaka join the list in April 2020, and closer to home the carrier’s Kuala Lumpur – Istanbul service also upgrades to the 787-9 from 12th May 2020.

Here’s how the schedule looks on the KL route:

Less than a month later on 9th June 2020, that daily service is supplemented with four additional weekly flights also operated by the Dreamliner. That’s the same week the Singapore route starts receiving the 787-9, and means a total of 11 weekly flights on the Turkish Airlines KL route will have these new planes and new seats.