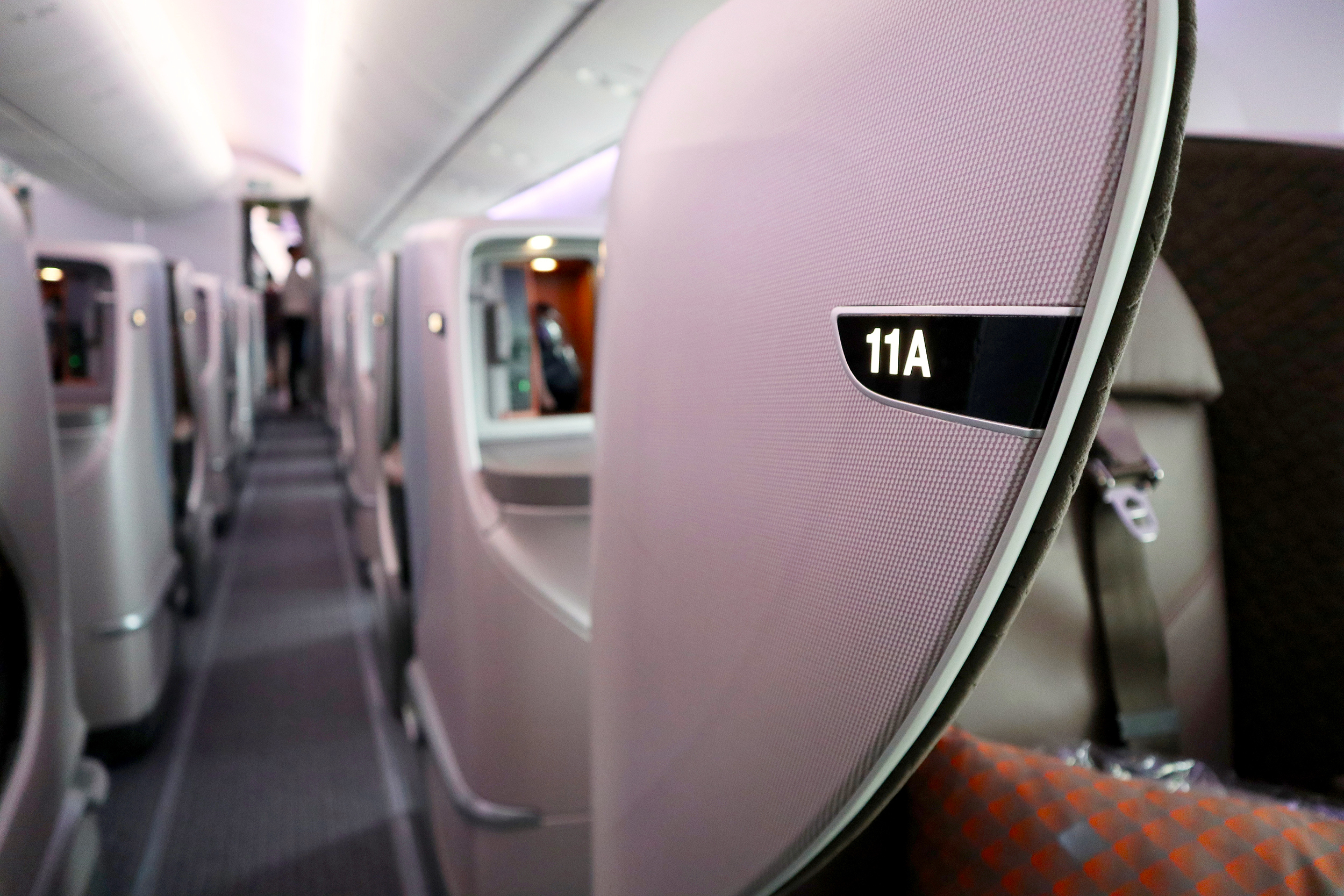 Since the 787-10 arrived in Singapore we’ve been avidly following the coverage and reviews from the delivery flight and press launch, and we published our ‘revealed’ article on delivery day. We’ve since shied away from making major judgements on the new products – it was nice to see the seat on the delivery flight or as a mock-up at the press event but it’s difficult to tell the full story outside the regular commercial operation.

Seeing how a product performs in a real-world commercial environment, with normal passengers, crew, weather and technical issues is how you, the paying or miles-redeeming customer, will experience the product and that’s what we are aiming to provide you with this review.

A perfect example is the seat controls on the new A380 product. Innovative, neat and ergonomic. In the ‘real-world’ passengers struggled to work them out, leading to the conclusion they were somewhat unreliable.

Back in early 2009 it was the job of the Airbus A330-300 to introduce a new revolutionary lie-flat all-leather business class bed to the Singapore Airlines regional fleet.

That product ‘2009 RJ’ was subsequently rolled out to all regional planes, including 777-200s and 777-300s, and enjoyed a brief month of exclusivity in March 2018 following the long overdue demise of both the Spacebeds and ‘Ultimo’ Blue Recliners.

Originally designed as a stopgap aircraft, Singapore Airlines liked the A330 so much they went on to order 15 more in June 2011 and it subsequently became the second largest fleet in SIA.

Fast forward nine years and the A330 numbers are dwindling as aircraft are being returned to leasing companies (SIA never actually bought any of them, such was the perceived short-term need in the early days).

Last week the world’s first Boeing 787-10 arrived in Singapore, one of 49 such aircraft for the SIA group. This morning it was the job of this new aircraft to launch ‘2018 RJ’, the latest regional business class product, which entered commercial service between Singapore and Bangkok.

Since we weren’t doing anything else today, we joined the inaugural commercial flight (SQ970) on this new aircraft to find out what all the fuss was about.

The ‘new plane’ smell hits you as you walk in. The colour palette is modern and fresh, without being overstated (no Middle Eastern ‘bling’ here), featuring deep oranges and browns.

Dare we say it – the regional business class has slightly more muted tones than the new A380 business class we reviewed in early January.  The overall atmosphere is elegant – like a classic members’ club lounge.

In cabin overview, it’s immediately obvious that privacy has improved dramatically from the ‘2009 RJ’. As you stand in the aisle you can only see the seats directly in front of you. Beyond that, you can only just make out the top of the seats. In fact, it’s very difficult to tell how full the cabin from this perspective.

Picking the right seat can make all the difference to your overall flight experience – even if it’s just a 45-minute hop to Kuala Lumpur!

Generally, solo travellers should aim for seats closest to the window for increased privacy, although given the reduced seat width compared with the‘2009 RJ’ seat it may feel claustrophobic if you are susceptible to that, and the access is narrow.

Fear not if only ‘love seats’ are available – a large privacy divider is provided between them for use when you don’t know your neighbour. The ‘divorce seats’, at rows 12, 15, 17 and 19 D/F locations are set far apart with the console of each seat between them, providing good privacy.

Seats 11 A/K: Blocked as bassinet positions – but these will typically be offered to all passengers if they remain unoccupied when check-in opens at 48 hours prior to departure. They feature a large shelf near the window, designed to accommodate the bassinet, but if you aren’t travelling with an infant then this space is perfect for storing your bag in-flight.

Seats 11 D/F: Front row ‘love seats’. Perfect for couples travelling together and the foot area stretches into the bulkhead providing more legroom when in bed mode. There is a possibility of noise from infants at the bassinet positions in 11 A/K, however.

Row 16 A/K: No window at this seat position and close to the aisle. Avoid.

Row 20: Close to the busy galley serving the first half of the economy section, meaning the potential for increased noise during service. Caution.

The crew came around with welcome drinks. At this time of the morning, it was just juice and water. Champagne is available on request for departures before 10am.

Naturally, we started off with a glass of the Charles Heidsieck to celebrate this special occasion.

They can be lowered using the black buttons at the tip of each armrest. This increases the seat width to 26″, ideal for bed mode.

Whilst on the topic of armrests, they don’t appear to support body weight being exerted upon them – so aren’t useful for lifting yourself in and out of the seat. Moreover, when the armrests of the aisle seats are stowed – they encroach into the aisle itself meaning an increased likelihood of disturbance from passing passengers and crew.

As with the new Singapore Airlines A380 business class, there are no overhead gaspers (adjustable vents). We feel this is a backwards step, especially when so many passengers complain that Singapore Airlines’ cabins are too warm. Much better to give people the option to regulate their own temperature and airflow.

The seat shell not only provides much-improved privacy but also has a downside. At A/K locations where the seats are aligned against the window – it blocks the beautiful view from the oversized 787 windows themselves!

It’s a bit of a shame that they couldn’t have customised these seats although that would likely have lead to increased costs and less parts commonality, all for the sake of a better view.