Skip to content
Earning additional KrisFlyer miles on your day-to-day spend is getting easier, with 42 merchants in Singapore now signed up to KrisPay earn

KrisPay, Singapore Airlines’ blockchain-based digital wallet, launched in July 2018 with 18 merchants signed up to the scheme. At the time it simply allowed you to transfer your KrisFlyer miles into the program and use them as cash against purchases at those retailers, at an awful 0.67 cents per mile value.

More partners were promised, but after three months the list had only grown by two, to a total of 20. When the ability to earn miles using KrisPay first launched in March this year, an option that piqued our interest considerably compared to the awful spending deal, the list had grown to around 30 merchants, 27 of which allowed earning.

Those 27 were offering anything from 1 mile per S$10 spent (equivalent 0.1 mpd) through to 2 miles per S$1 spent (2 mpd) on your transactions, however you chose to pay for them.

That merchant list has had a bit of a growth spurt recently, now standing at 46 in total, 42 of which allow earning, so we thought it was a good time to take a look at where else you can be clocking miles to make sure you’re not missing out on any opportunities.

Why you should use KrisPay to earn miles

Before we get into the new partners, just a quick recap on why we do actually recommend earning miles by using KrisPay.

The bigger merchant list brings with it a new top earning rate of 3 miles per dollar. Before you get too excited, it only applies to one merchant so far. Most retailers are still offering 1 mile per dollar spent.

The earn rates are now one of the following:

We’ve highlighted the 16 new merchants in the list below.

The 16 new merchants since KrisPay earn was launched are as follows.

Note that one merchant, Qi Mantra, is no longer part of KrisPay since it merged with Spa Espirit.

The iFly Singapore addition brings a new 3 mpd rate, but to be fair it’s of limited value unless you had a sudden urge to go indoor skydiving. That’s because it only applies to walk-up rates, whereas you’ll get at least 8% off by booking online in advance (KrisPay earn cannot be used in that case).

Bottles & Bottles is a nice addition. Again you’ll have to shop in-store to earn using KrisPay but if you have one nearby their pricing can often be competitive, especially for Champagne. KrisPay users also get 10% off full price items, and you’ll be earning 1 mile per dollar on the total bill, whatever you purchase. 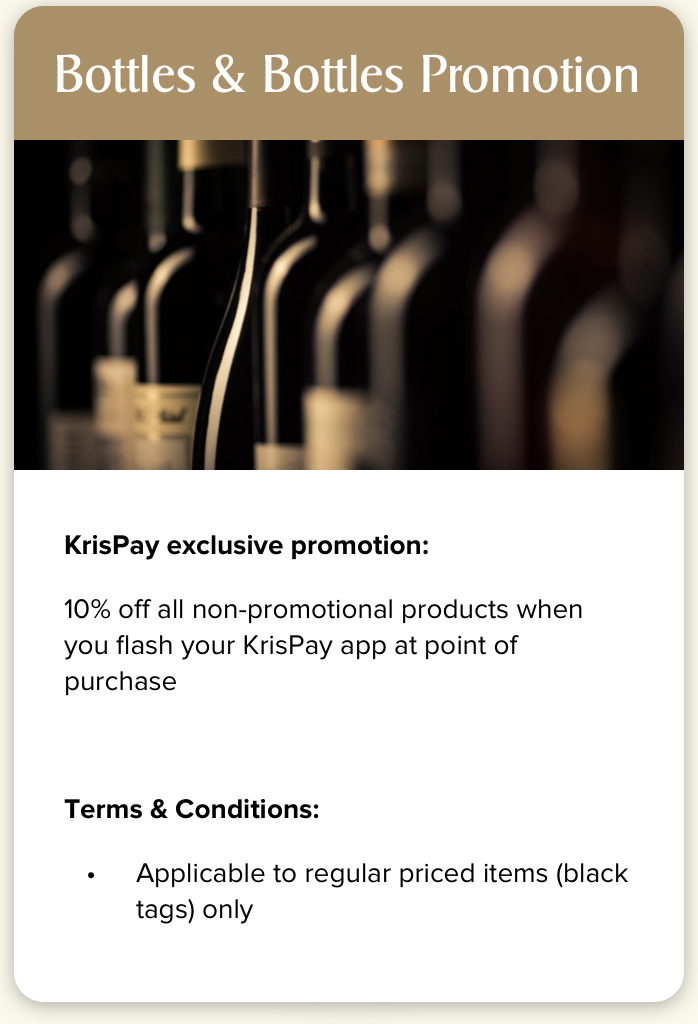 The important thing is that this promotion doesn’t require you to use KrisPay miles to pay for your purchase (you should always avoid those, as you never want to do that).

As for Krispy Kreme, how could a doughnut not taste so much better with an extra KrisFlyer mile per dollar on top?

All 11 Krispy Kreme outlets in Singapore are participating in the scheme, including the two at Changi Airport.

There are still four KrisPay merchants not allowing earning when you make a transaction:

These only allow you to pay using KrisPay miles, which you definitely don’t want to do.

To earn KrisPay miles when making your payment, key in the value of the payment made, and show the cashier the dynamic QR code generated on your mobile device. KrisPay miles will be awarded upon successful scanning of your QR code by the partner at the time of payment.

Earned KrisPay miles can be transferred to your KrisFlyer account within 7 days of earning the miles. To do so, simply tap on the “Transfer to KrisFlyer” button which will be present in the miles earned confirmation screen or transaction details screen.

We therefore recommend transferring to KrisFlyer immediately following any earning transaction, in case you either forget or make a mistake later.

Finally, if we haven’t said it enough times, never pay using your KrisPay miles. Once you earn them from a transaction, transfer them in their entirety straight to your KrisFlyer account.

If you haven’t got it yet, you can download the KrisPay mobile app at the following links. Remember only use it to earn miles, never be tempted to spend your KrisPay miles at any merchant.

Don’t miss out on the latest options, and here’s hoping for many more to come.